The other night, I was reflecting on the past year of chasing landscape photos and one episode stood out in my mind as an uncomfortable experience and something of a photographic failure. It was during a weeklong camping trip in Gibraltar Range National Park in northern New South Wales in late May (this is just coming into winter for Northern Hemisphere readers). This is a spot I try and get back to as often as I can because of the great range of scenery on offer – mountain cascades, impressive granite tors, golden swamps of native grasses and shrubs, rainforests and high country woodlands. The Needles is a group of towering granite columns that stand high above the wild Dandahra Creek Gorge – they are around 3 km from the camping area at Mulligan’s Hut and the walk takes about 50 minutes. It’s not a particularly difficult hike, but there are some steep sections as you wind up through the rainforest before emerging on the small lookout area.

I’d decided to get some sunrise shots looking out past the Needles and over the western part of the National Park. Having done the same thing the previous year, I knew basically what to expect and spent the evening before cleaning my gear and packing my backpack ready for an early start. The sun rises at about 6:30 am in May in this area , so I set the alarm for 4:30 to give myself plenty of time to have a quick cup of coffee before setting off – that would put me on the spot with plenty of time to get set up and maybe catch some of the pre-dawn glow above the distant mountain tops. 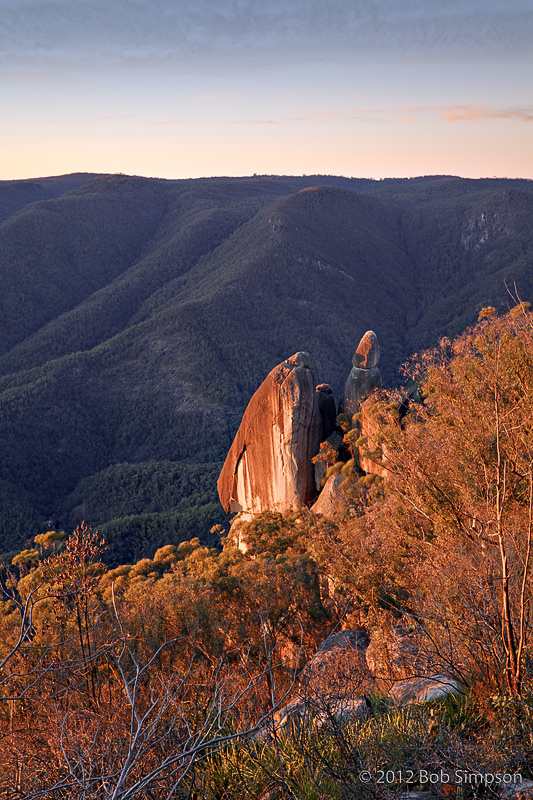 There was a light patter of rain on the canvas roof of my tent when the alarm sounded. I’d heard the same thing the morning before as I got ready to hike to another spot, but it cleared away by the time I hit the trail. The rain stopped once or twice as I sipped on my coffee by gaslight and there were a few stars showing in the pitch black sky. The thermometer hanging under my tent awning was sitting dead on 1 degree C, but I was feeling pretty snug in woollen beanie and gloves and heavy fleece.

With the raincoat hood pulled up over my head and the waterproof cover on my pack, I headed off in a light rain. The smooth granite boulders at the first creek crossing can be slippery, but especially so this morning so I took extra care picking my way across to the little footbridge by torchlight. Ten minutes later, and despite the cold, I stopped to take off my beanie and stuff it in the pack. The raincoat hood and a brisk pace were enough to keep my ears warm.

The rain got a little heavier as I climbed up through the rainforest, but then eased off as I finally stepped down on to the flat rocks on the edge of the escarpment at the lookout. There was a dark void in front of me, and occasional gusts were pushing wafts of cold grey mist up from the deep river valley straight into my face. It was about 40 minutes until the scheduled sunrise, but there was no sign of any glow or any horizon.

I found a hollow tree stump just back from the lookout that offered some protection from the wind and rain and set about readying my camera and tripod. I use a hiking dry-bag to slip over my camera and lens when it’s raining, and also carry a small umbrella to help keep things dry. With everything in place I stowed my backpack under the wet stump and carried my tripod back down to the lookout.

My eyes had become a little better accustomed to the dark and I could occasionally just make out the massive forms of the Needles through the swirling mist. This could be good, I thought, if I can just get a little break in the grey to put some light on the scene. Under cover of the umbrella, I took the dry-bag off the camera to try and make a composition and set the focus. The only option was to concentrate on the Needles themselves which stood around 80 m away – there was still no sign of the background hills or any horizon.

The wet, misty updrafts had become more continuous, and the rain was still falling, so water was coming at me from all angles. I no sooner wiped the lens dry with a microfibre cloth when another updraft would coat it in tiny droplets. Shuffling between holding the umbrella in one hand and using the dry-bag to try and deflect the updrafts with the other, I fired off a few test shots and checked them on the LCD screen. As expected they were a grey mess – the condensed little histograms confirmed that there was little difference between the darkest and brightest parts of each image.

For the next hour I stood huddled under umbrella and raincoat, struggling to keep my camera dry and intermittently firing the shutter when the mist parted enough to give some shape to the Needles. Six-thirty came and went with little sign that the sun had bothered to rise, except that the void in front of me was slightly less black and the mist was a marginally lighter shade of grey. I usually don’t have too much problem staying warm when actively taking photos in cold conditions – the excitement of the moment is enough to hold the cold at bay – but after an hour of shuffling around the 3 or 4 square metres of available standing space at the lookout with icy rain and mist dripping off my nose, the cold had well and truly set in to my bones.

By 8:00 and with no improvement in the conditions, I decided to pack it in. I might have persevered longer except I needed to get moving to warm up. So with 15 horribly grey images imprinted on my memory card, I quickly packed everything away, hoisted my pack and set off on the slippery slog back to camp.

An hour later I was sipping on my second coffee of the morning under a wet tent awning....with a contented grin on my face. It’s hard to get annoyed at episodes like this when you’re working in the best office in the world surrounded by nothing but forest, even if it is dripping wet and your toes are cold. If I'd gone through the same discomfort for so little result when I worked in a city office, I might not have been so philosophical about it. But I'd experienced one of Mother Nature’s less welcoming but still beautiful displays, and I still smile when I remember standing there cold and wet waiting for the mist to lift.

The lack of any usable photos was a minor price to pay. 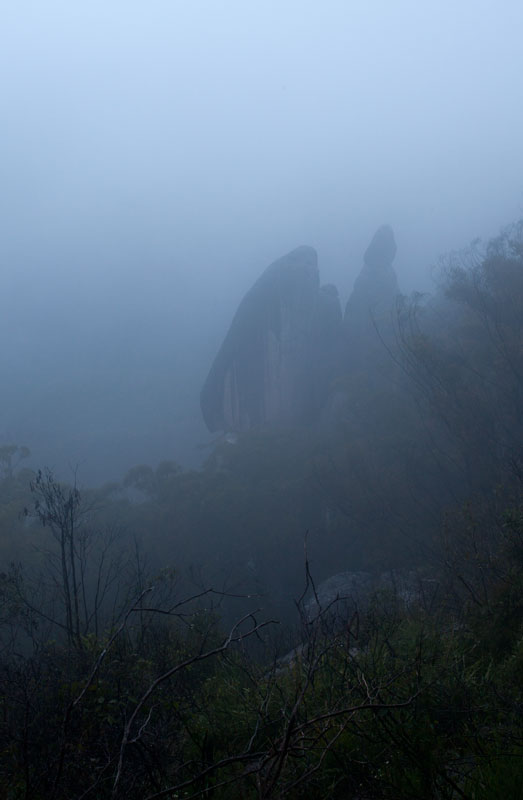 The Needles at sunrise - May 2011. My best shot for the morning!

Through the past, lightly - images of 2014
Musings on photography
I snapped the image above from a rock outcrop in Mount Kaputar National Park in July 2014. I remember how good the first sunlight of the day felt on my face after an hour or more of scrambling about t...
7859 Hits
2 comments
Read More

Exposure blending
Tips & techniques
This is a technique I use on a lot of my images to try and show the full dynamic range of a scene as is visible to the human eye. Digital camera sensors are very good at what they do but they are no m...
7240 Hits
0 comments
Read More