I first heard of Washpool National Park more than 25 years ago when I was given a coffee-table book of Australia's wilderness areas for Christmas. To a boy from a farm in rural Victoria,  the images of towering, verdant rainforest with twisted lianas, groves of palm and fern forest and sparkling mountain cascades, it seemed like some exotic far-off land - the sort of thing I'd seen in old Tarzan movies.

It was another 20 years before I visited Washpool for the first time. The images from the book were still clear in my mind and the reality of seeing the Washpool wilderness first-hand didn't disappoint. Walking the silent, shady forest trails among giant coachwoods, cedars and blue-gums is an awesome and humbling experience - it is nature at its most magnificent and being there surpasses many times over anything you can see or read about in a book.

One of my memorable discoveries on that first visit was Summit Falls on the Washpool circuit walk. The falls aren't particularly high and the stream is quite small but, tucked away on a steep hillside beneath a lofty rainforest canopy, it is a magical and relaxing spot to take a rest and soak up the atmosphere of the Washpool forest.

Five years later, in May 2014, I finally made it back to Summit Falls with my camera. I chose an early morning start (is there a better time of day to photograph the natural world?) and was on the trail to the falls by 5am. Climbing up a dark forest trail by torchlight means you miss a lot of scenery but it also makes for a quick trip as you're not continually stopping to marvel at the sights. So after a 50 minute climb, I reached the turnoff to Summit Falls and descended the steep track down to the creek.

Half an hour before sunrise there was already enough light to make out the white-water cascading over rocks and logs and I spent the next ten minutes searching about for photo options and getting my breath back after the hike. Everything stays wet and slippery down where the sun don't shine  so every footstep has to be chosen with care - it makes for slow going but that's a lot better than taking a tumble and doing damage to body or equipment.

Even though it was still quite dark, the little light that was filtering down to the creek was reflecting off every wet surface - which pretty much meant every surface - so the first thing I did was get out my circular polarising filter to help control the reflections. A polariser also cuts the amount of light reaching the camera's sensor by one to two stops which means longer exposures are needed unless you bump up the ISO or use a larger aperture, but that's a fair compromise when the result is richer colours and a glare-free image. All of the images below were captured using a circular polarising filter.

For the next hour I scrambled and slid my way around the cascades capturing them from different angles. 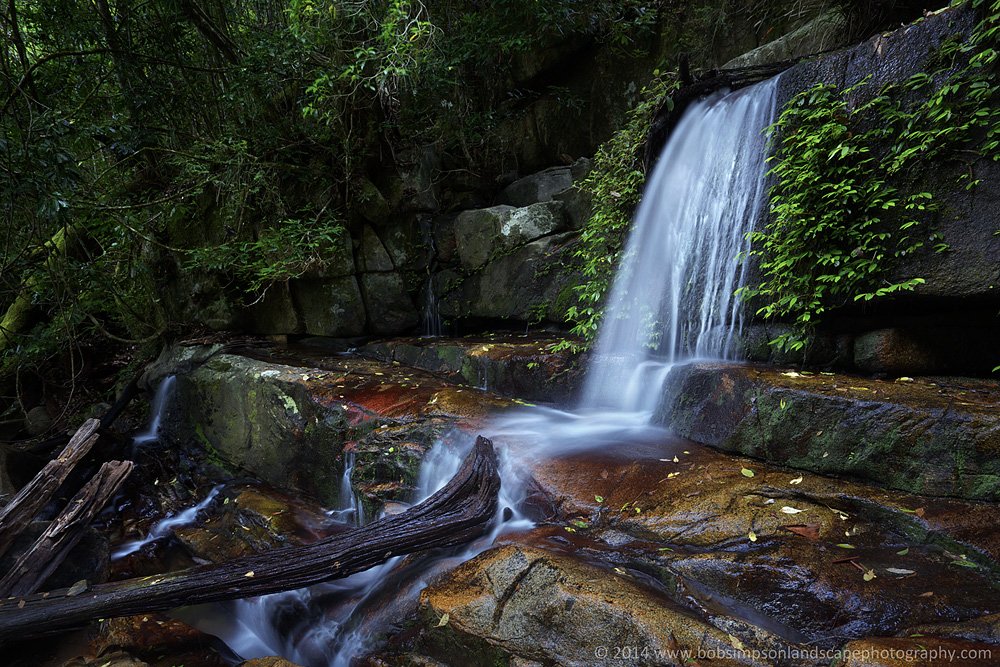 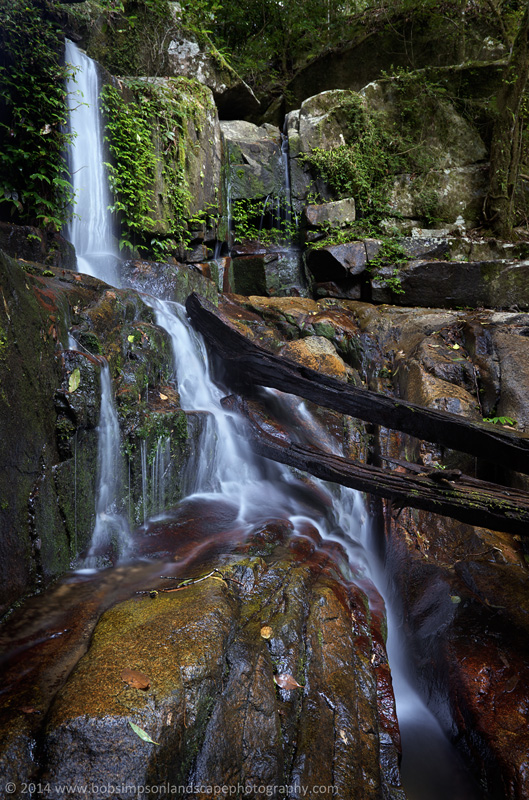 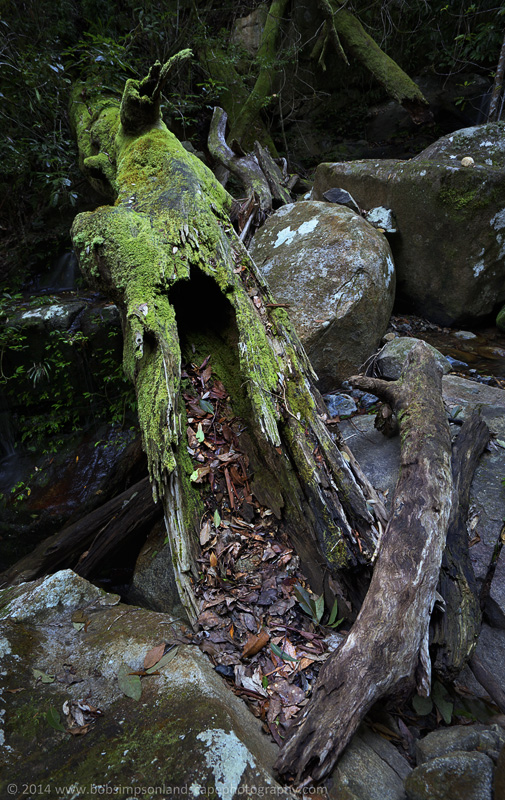 A rough, overgrown track leads downstream to a second, higher set of falls that I imaginatively christened "the lower cascades". After capturing the view from the top of these falls, I found my way down to their base and set up several compositions using the moss-covered logs to help frame the scene. I've posted a short video that shows how I set up for the images below...you can view it here. 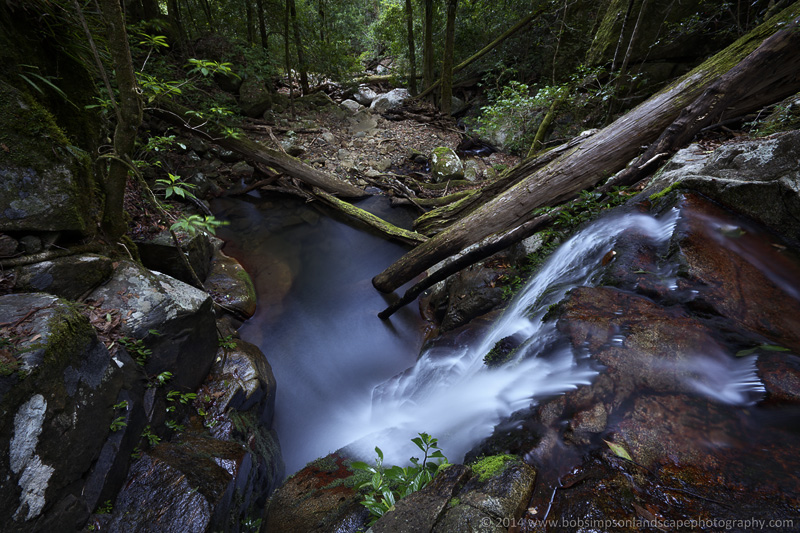 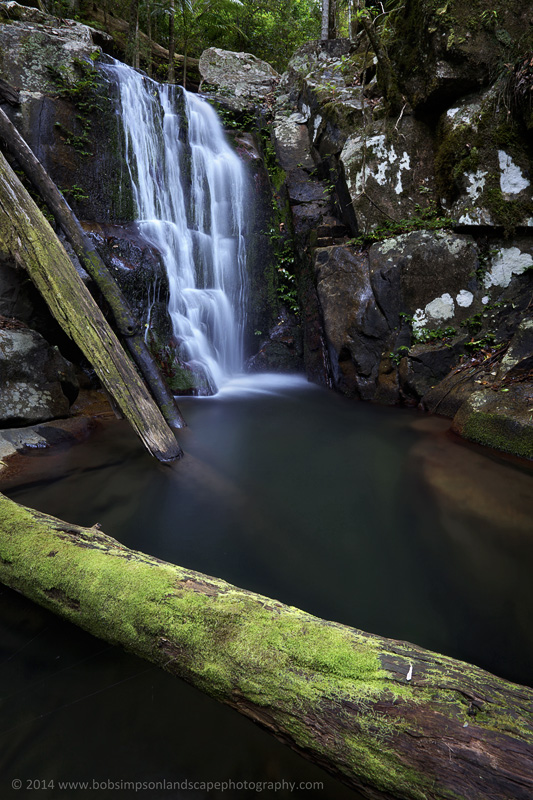 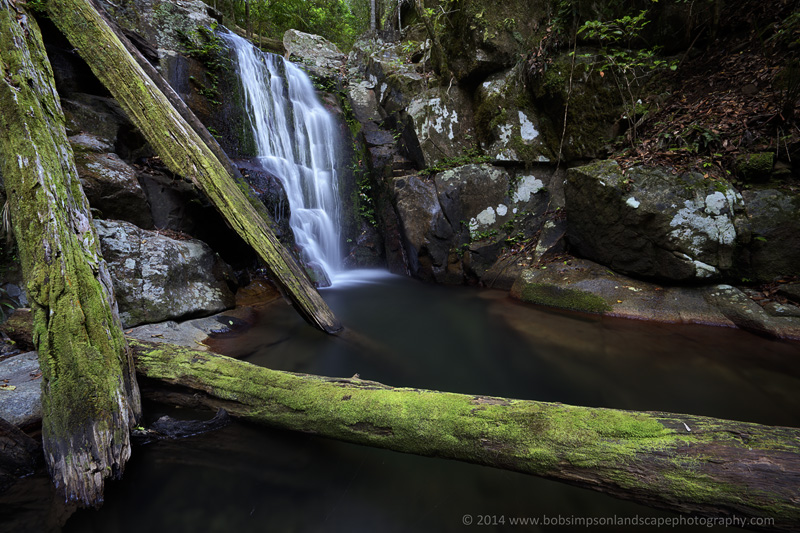 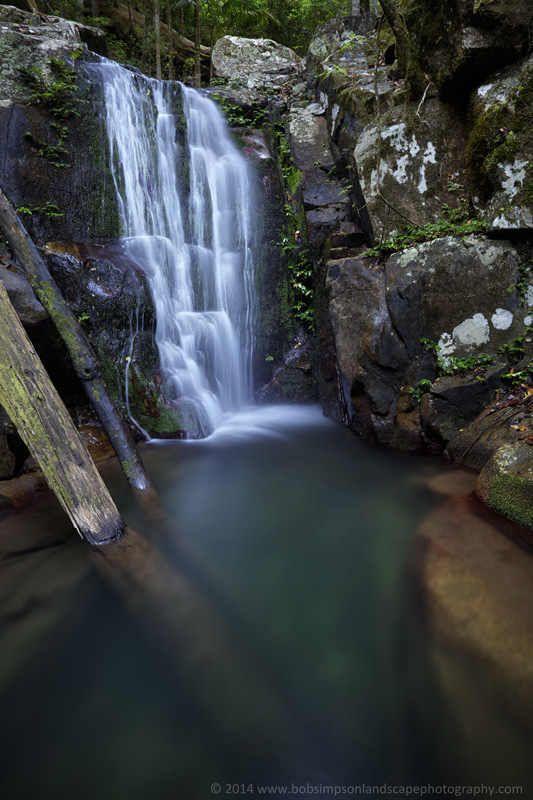 One of the technical difficulties with photographing waterfalls is that the white-water is often much brighter than the surrounding features (rocks, logs, trees). Choosing a good exposure for the white-water often means that everything else in the scene will be slightly, or strongly, underexposed. Conversely, exposing for the surrounding environment often leads to overexposure of the white-water. My way around this is to capture bracketed exposures and later blend together (in Photoshop) the white-water from the darkest exposure with the well-exposed parts of the brighter image(s). Most of the images above have been treated in this way - the shutter speed given below each image represents the 0EV exposure which accounts for most parts of the image, but the white-water is often blended in from a -1EV or -2EV exposure and the darkest parts of the image from a +1EV or +2EV exposure. I explain more about this method here, and there's an article about my approach to photographing waterfalls here.

After several hours down on the dark, wet floor of the rainforest, it was something of a relief to climb back out into full daylight. From Summit Falls, the trail descends for around 3 km back to Coombadjha Creek and the car-park, taking in leafy views across deep valleys as it winds between huge forest trees and through natural fern gardens. The Washpool wilderness is a wonderful and inspiring place to visit and photograph and its World Heritage listing should ensure it stays that way. I have it marked down for a return visit and this time I won't be waiting 20 years.

Very nice images these falls have been on my bucket list for some time now thanks for the information, looking forward to the adventure

1 Cancel Reply
Very nice images these falls have been on my bucket list for some time now thanks for the information, looking forward to the adventure
Cancel Update Comment

Thanks Peter - it's quite a steep walk up there but well worth it...and it's downhill on the way home! Hope you enjoy it

0 Cancel Reply
Thanks Peter - it's quite a steep walk up there but well worth it...and it's downhill on the way home! Hope you enjoy it :)
Cancel Update Comment