Filters still have a place in digital photography, but the effects of many of them can be easily replicated in processing software. The old colour correction filters are pretty well obsolete now that colour temperature can be simply adjusted during processing with much greater control than the filters ever allowed. It’s still common to find graduated neutral density filters in the bag of a dedicated digital landscaper, but even these have fallen out of favour somewhat as HDR and other multiple image blending techniques have provided an alternative approach to taming contrast.

One filter that is as relevant today as it ever was is the polariser. There are software techniques that can approximate some of the effects of a polariser, but these often fall well short of the real thing. But there are also things that a polariser can do that software simply can’t – like cutting out glary reflections from water and wet surfaces. If there is one filter that deserves a place in every landscape photographer’s bag, it is the polariser.

About polarising filters
There are two main sources of polarised light that landscape photographers need to know about. Firstly, there’s the scattering and polarisation of sunlight when it bounces off air molecules on it’s way through the atmosphere – this can give skies and distant horizons a hazy, washed-out look. Then there’s polarisation caused by light reflecting off flat, non-metallic surfaces, like window panes, water and wet vegetation – this creates glary reflections that can make it nearly impossible to see through a window or into the water, and washes out the colours of other wet surfaces. The job of the polariser is to filter out some of this polarised light so that glare and haze are reduced and colours restored. Most people will be familiar with these effects from wearing polarised sunglasses – the world is a more vibrant and colourful place through a pair of polaroids.

Polarising filters come in two main varieties – circular and linear. If you still have an old polarising filter kicking around from the film days, it’s likely to be a linear polariser, and unfortunately it isn’t going to be much good on your digital camera. The sensors in a digital camera that look after autofocus and exposure metering rely on ‘beam splitters’ that direct a fraction of the incoming light onto their surfaces, and these splitters rely on polarisation of the light. Effectively that means that autofocus and metering won’t work properly with a linear polariser because most of the incoming polarised light has already been filtered out. The only answer is to invest in a good circular polariser, as tough on the wallet as that may be.

Circular polarisers have two elements – the front one that is rotated to give different effects is actually a linear polariser, but the second element is the ‘circular’ part of the assembly that is designed specifically to allow our digital cameras to work properly.

One of the choices we have to make when buying any filter is wether to get one that screws onto the front of our lenses, or one that drops into a filter holder like those made by Cokin and Lee. There are pros and cons to both designs. Screw-in filters are a little slower to attach and remove, and you’ll either need a separate filter for each lens, or step-up / step-down adaptors so that a single filter can be used on all of your lenses. If you go for the drop-in variety, you’ll only need one filter but will still need adaptors so the filter holder assembly can be moved from lens to lens. One drawback to drop-ins is that they sit a little further away from the front element of your lens than a screw-in and this can cause vignetting problems when using a very wide angle lens. Actually, screw-in filters can cause the same problem, so the better (and more expensive) ones have a very slim profile to get around the issue.

I prefer to use a screw-in polariser and leave it on the front of my lenses by default – it’s a rare landscape shot that doesn’t get some benefit from a polarising filter, and if for some reason I don’t want any polarising effect, I can back it off by rotating the front filter element. That way the polariser also serves as protection for the much more expensive front element of my lens. I do sometimes remove the polariser, particularly if I need a little extra light so I can use a particular shutter speed or aperture.

Putting your polariser into action

Blue skies
Probably the best known effect of a polarising filter is its ability to darken and saturate a blue sky. Given the right conditions, this can change a pale, washed out sky into something much more vibrant and colourful. This effect is most pronounced at 900 to the direction of the sun, so if the sun is directly overhead the sky will be darkened above the horizon in all directions – at sunrise and sunset, the strongest effect is achieved by shooting generally towards the north or south (ie. at right angles to the sun). Clouds aren’t affected by a polarising filter to the same degree as blue sky so they will stay white and fluffy while the sky around them is darkened. This increased contrast can really bring a sky to life.

There are a couple of potential downsides to using a polarising filter to enhance the sky. Firstly, when using a wide angle lens (eg. 28mm and wider), the polarising effect will be uneven across the field of view. You will often notice a fall-off of the effect towards one or both edges of the frame as you move further away from the optimum direction (ie. 900 to the sun). You can reduce the problem by dialling back the front element of the filter until a more even gradation is achieved, or remove the polariser altogether. Another option is to take one shot with the polariser attached so you get the benefits of glare reduction and increased saturation in the foreground, and a second shot with the polariser removed so the sky is free of any unwanted uneven effects. The two shots can then be blended together on the computer (see Exposure Blending). 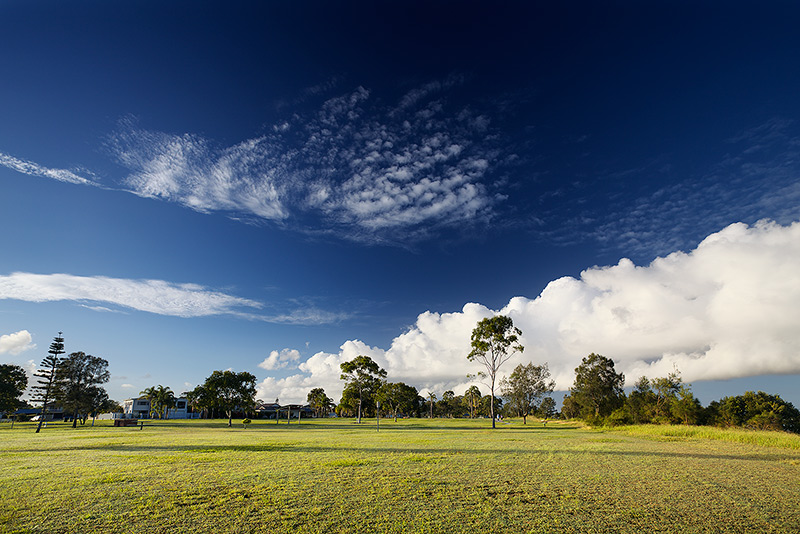 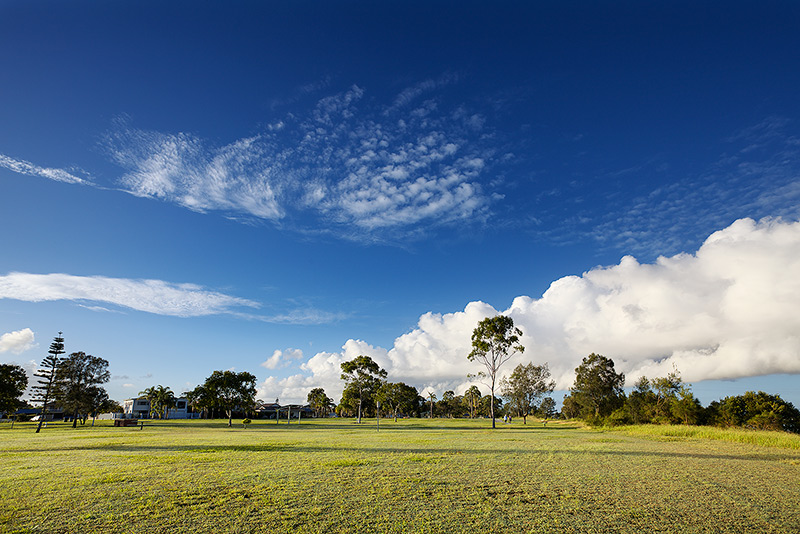 These shots were taken early in the morning at 900 to the direction of the sun with a 17mm lens - in the first image the polarising filter was dialled for maximum effect creating a dark patch in the middle of the sky and lighter areas to each side. In the second image I rotated the front element of the polariser to reduce the effect and even out the sky, but this has also reduced the contrast in the lower sky and and washed-out the colour of the grass a little.

Another thing to keep in mind is that an uneven polarising effect will be much more noticeable when shooting in landscape format than in portrait – shooting vertically reduces the horizontal field of view and so reduces the potential for fall-off at the edges of the frame.

A second problem occurs when the effect of the polariser is so strong that the sky turns almost black  – this is usually not a good look and can be reduced by rotating the front element of the filter until you’re happy with how things look. Examples of this can be seen in the images above and below. 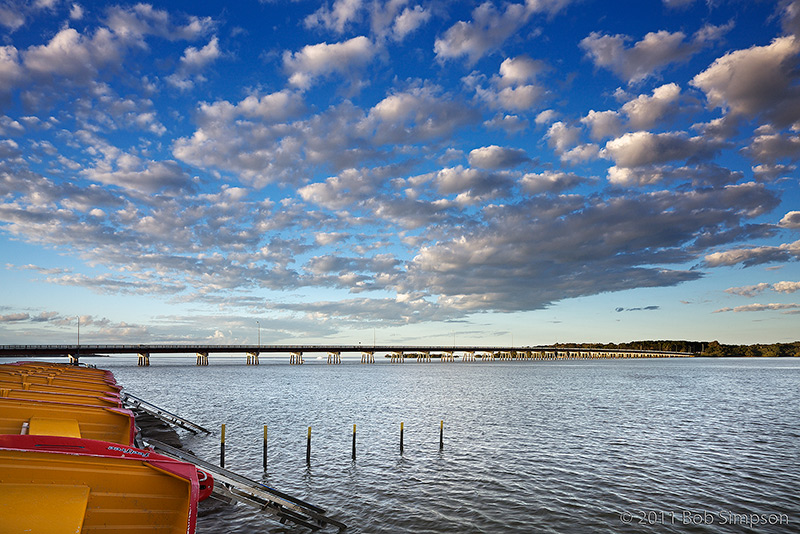 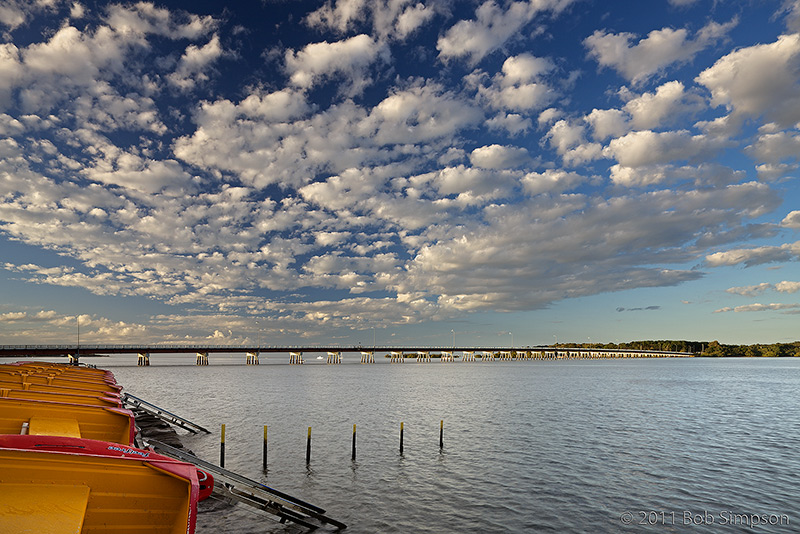 The first image above was taken without a polariser - the second was taken with polariser attached and dialled for maximum effect. Note in the second image the nearly-black section of sky that lightens towards each edge of the frame - while this isn't desirable, the polariser has also added an extra 3-dimensional quality to the clouds and boosted the contrast and colour in the lower sky and around the bridge (a little hard to see in this small image). The longer shutter speed allowed by the polariser has also smoothed out the water a little (see below).

Water and wet surfaces
One of my favourite things about a polarising filter is its ability to cut glare and reflections from a water surface. Strong reflections on water can really enhance a landscape photograph, but equally, removing reflections to reveal the rocks or vegetation on the bed of a stream can add beautiful detail and depth to an image. The shot of a coastal tannin-stained stream below comes to life when the patterns in the sand are revealed by a polariser. In this case, the polariser has also boosted the colours of the water and log. 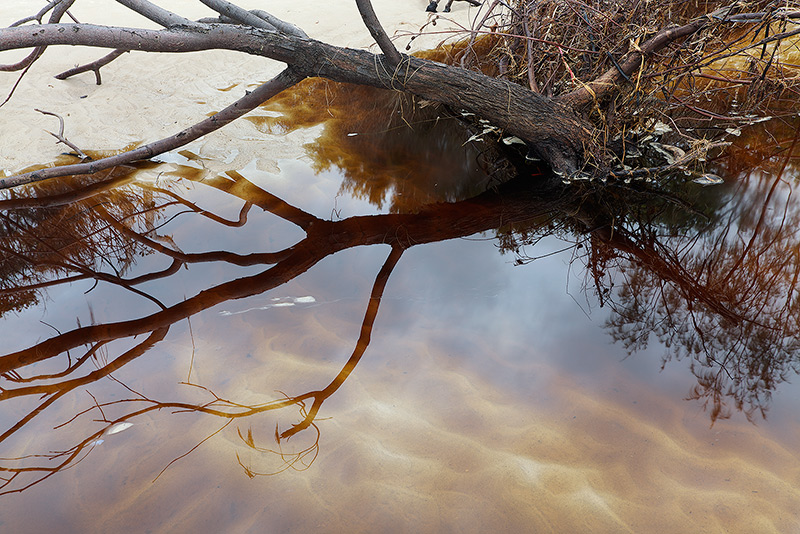 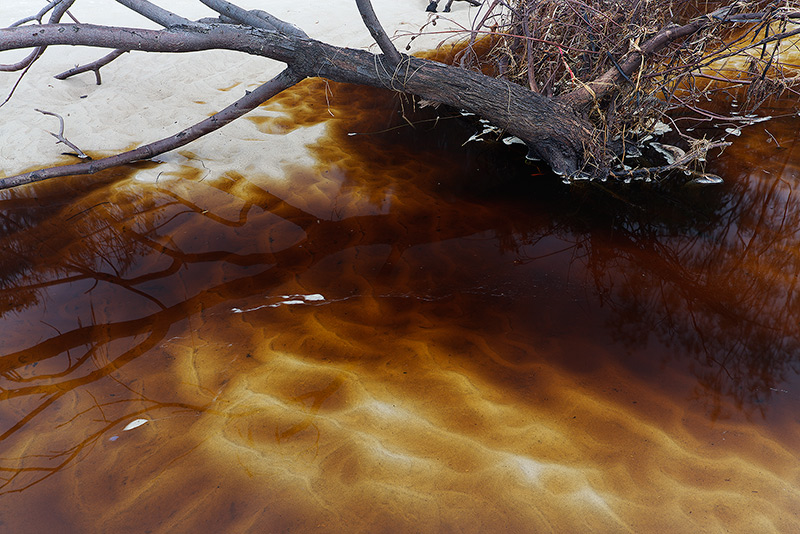 Any wet surfaces, like foliage wet with dew or rain, can appear washed-out in a photograph because of reflective glare. A polarising filter can cut through this glare to reveal much more vibrant colours beneath. This effect will enhance your photos even on the cloudiest of days and in low light situations at the start and end of the day. It’s just a matter of paying attention to your viewfinder or liveview display as you rotate the front element of the polariser. The benefits of a polariser are very apparent in the shot of water lilies – glary reflections caused by the low angle of the sun have washed out the first image, but the addition of a polariser in the second has added considerable depth and colour. 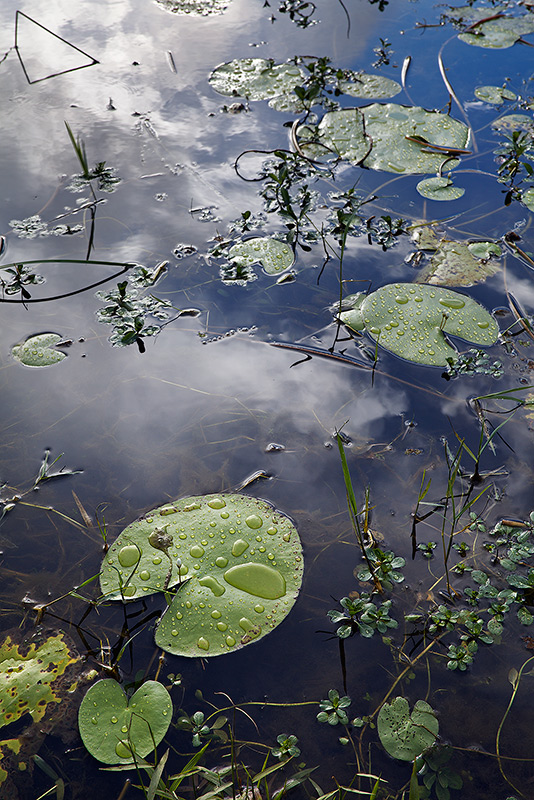 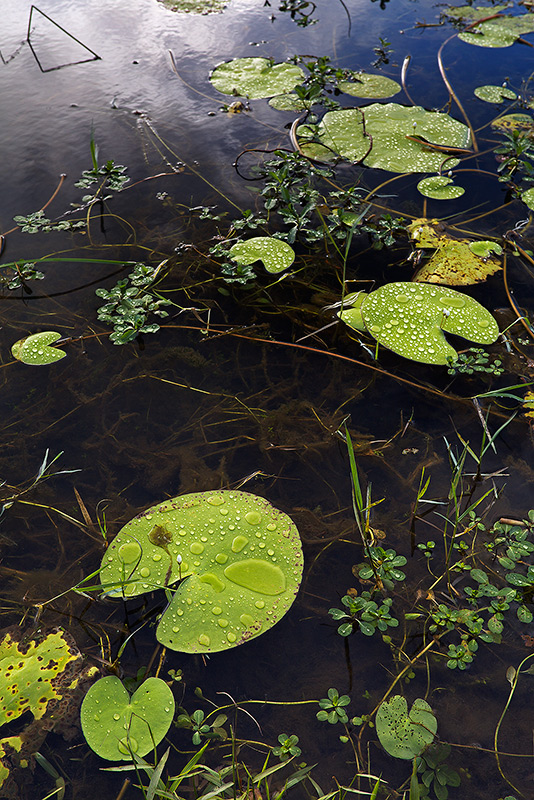 A de facto neutral density filter
A polarising filter will reduce the amount of light reaching your camera’s sensor by around 1-2 full stops. This means that for a given f-stop and ISO setting, attaching the filter will lengthen the shutter speed required to achieve a correct exposure. This may or may not be a problem – if you’re hand-holding your camera you probably don’t want a long shutter speed, whereas if you’re using a tripod it’s less likely to be an issue. Of course, in some circumstances photographers use neutral density filters to achieve exactly this effect – these filters allow a slower shutter speed to be used to increase motion blur effects, or a wider aperture to reduce depth of field. A polarising filter has this effect built-in – it’s up to the photographer to be aware of the effect and use it to advantage. The images below show this effect - by attaching a polariser, the longer shutter speed has smoothed the ripples on the water as well as cutting glare (and yes, I know it's a very uninteresting photograph but it shows the effect nicely!) 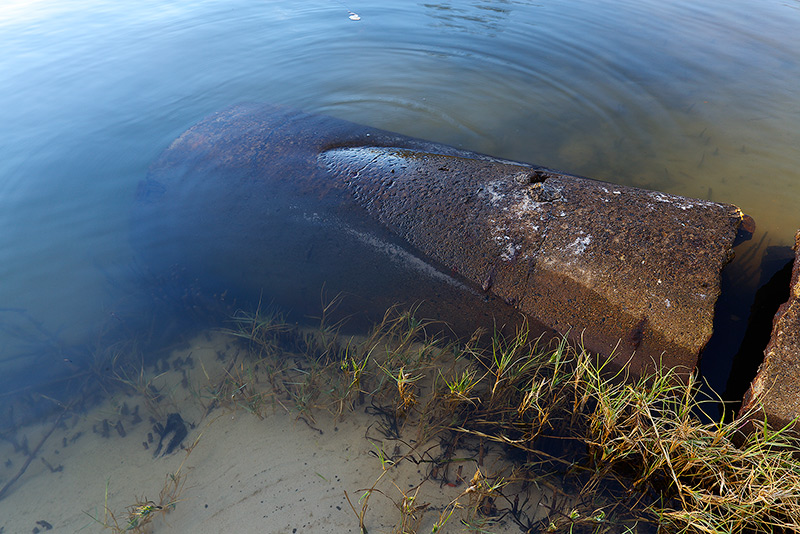 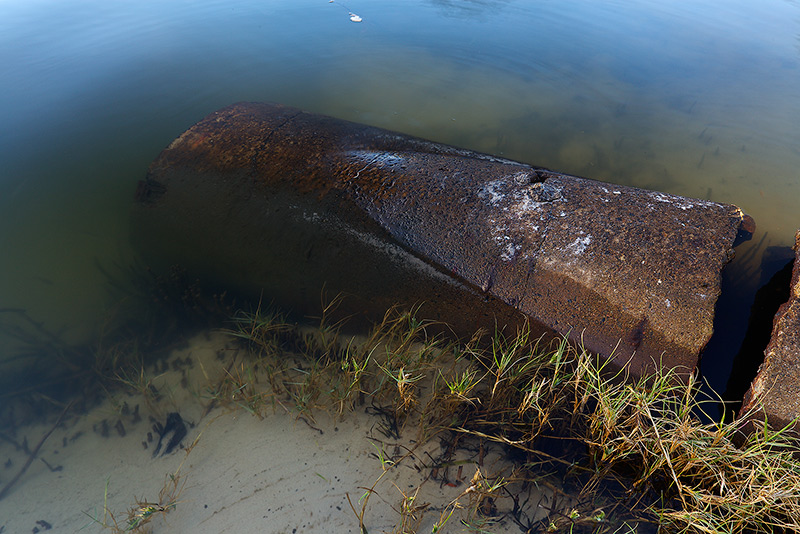 Summing up
There are some good reasons to make a polarising filter one of your standard tools for landscape photography. There are also drawbacks to be aware of, but with careful and thoughtful use, a polariser might just give your landscape shots that lift you’ve been looking for.

Through the past, lightly - images of 2014
Musings on photography
I snapped the image above from a rock outcrop in Mount Kaputar National Park in July 2014. I remember how good the first sunlight of the day felt on my face after an hour or more of scrambling about t...
7461 Hits
2 comments
Read More

Exposure blending
Tips & techniques
This is a technique I use on a lot of my images to try and show the full dynamic range of a scene as is visible to the human eye. Digital camera sensors are very good at what they do but they are no m...
7058 Hits
0 comments
Read More