In reviewing my past year, I quickly realised there is a lot more to landscape photography than the final image. Like a lot of photographers, I went through my new images from 2012 and selected what I consider to be some of my best work (see the final list here), but that only tells a small part of the story. While it's rewarding to create images that other people like, it is just as important to savour the little moments along the way - good and bad - that lead to the creation of those images.

So here is my alternative 'Best and Most of" list for 2012. I had fun recalling all of these moments, so I hope you find them entertaining.

Most scratches suffered in pursuit of a photo
There are plenty of opportunities to pick up scratches and bruises when you're trying to put yourself in the best spot to photograph a landscape scene. On this occasion, I was photographing the Needles (Gibraltar Range National Park) at sunrise from atop a boulder when I noticed some beautiful light developing in a foggy valley way below me. Thinking it would be easy to scramble 20m down to a better vantage point, I quickly became tied up like a Christmas turkey in thick, rubbery vines that wound through the tangled vegetation on the steep slope. After much cursing and frantic untangling, I made it to my chosen spot and captured this image and several others before the light faded. No serious damage done, and I got the image I wanted, but my arms and legs bore an interesting patchwork of scrapes and bruises for the next few days. 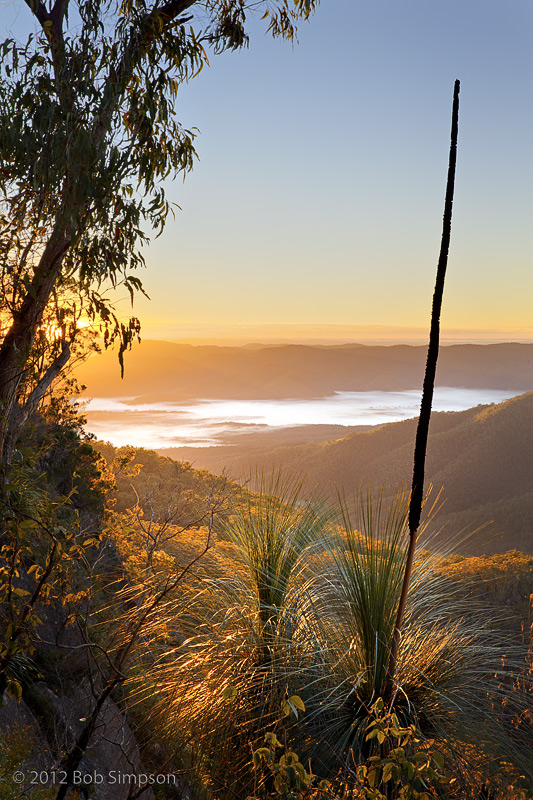 Best clouds
Interesting cloud patterns are a landscape photographers dream....I've been lucky enough to come across quite a few beauties during 2012. These are just two of many that stand out in my mind. The candy-striped sky above a rocky shore was captured in November at Caloundra Head, and the feathery, fanlike display (cirrocumulus??) is from Cotton Tree at the mouth of the Maroochy River. 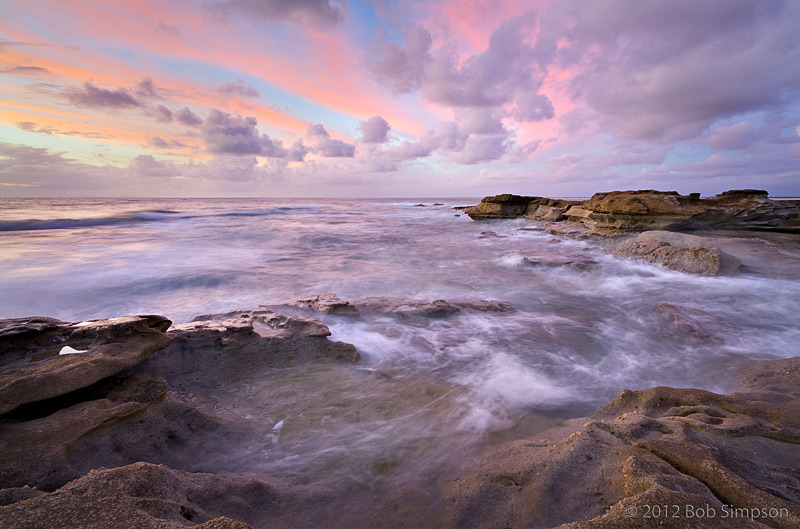 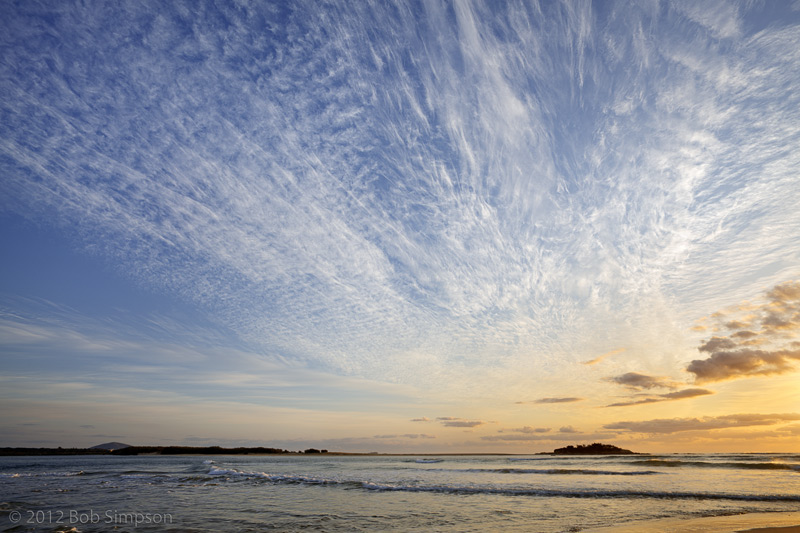 Coldest toes
I know my friends from truly cold climates will laugh at me, but some of the places I visited in 2012 were pretty chilly....honestly! I like the cold, but I like it most when I can stay warm despite the cold. Two occasions spring to mind when the cold really started to seep in....the first was on this frosty morning in Gibraltar Range National Park when I spent a good hour wandering carefully through the tall grasses capturing close-ups of ice crystals on vegetation. It wasn't until I was finished that I realised how cold my toes were - the eyelets and crevices in my boots were all clogged with ice and my little toes on both feet were quite numb. A brisk hike of several km back to the car got the blood flowing again. The second occasion was when I took off my boots at Five Day Creek (New England National Park) to wade out to a midstream rock to capture the second image below. The air temperature was close to freezing, and there were ice droplets under the creek banks. I thought I was tough enough to handle it, but the icy water had me dancing and groaning in pain....maybe squealing is a better description. I have to admit that some potential midstream compositions were overlooked as I retreated back to the comfort of dry socks and boots. 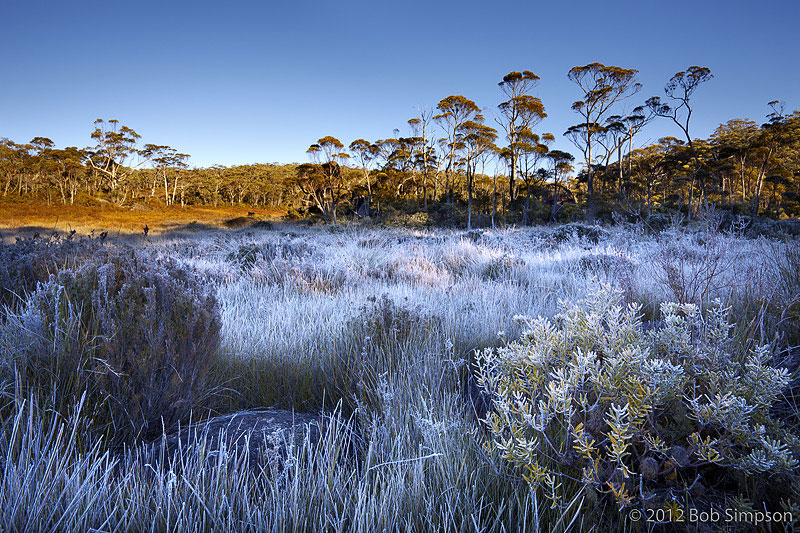 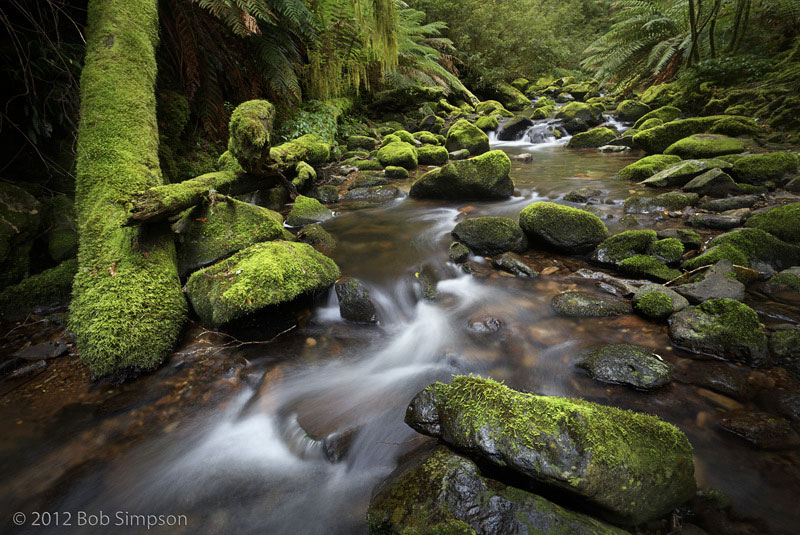 Most irksome morning
It's always nice to have a location to yourself during a landscape photo session. So I was a little peeved when after an hour hike to Norfolk Creek on Bribie Island, a 4wd came roaring along the beach just before sunrise. I had set up my tripod on the edge of the shallow channel where the creek runs across the beach and out to sea and was waiting for the light of sunrise. With any luck, I thought, the 4wd would keep on going up the beach and I would be able to frame it's tracks out of my composition. Wishful thinking! Instead of staying on the firm sand near the mouth of the channel, the driver decided to veer away from the beach and cross the channel right in front of me - and immediately sunk to the axles. The next few minutes were a frenzy of roaring engine trying to go backwards or forwards, and then finally unloading the car and trying to dig the soft sand out from around the wheels. I wished the two occupants well, but wasn't about to get wet up to my neck on their behalf, so wandered off to look for other compositions. They eventually got the car free, and I picked up a couple of my favourite images for the year (you can see the other one in my Favourites list). 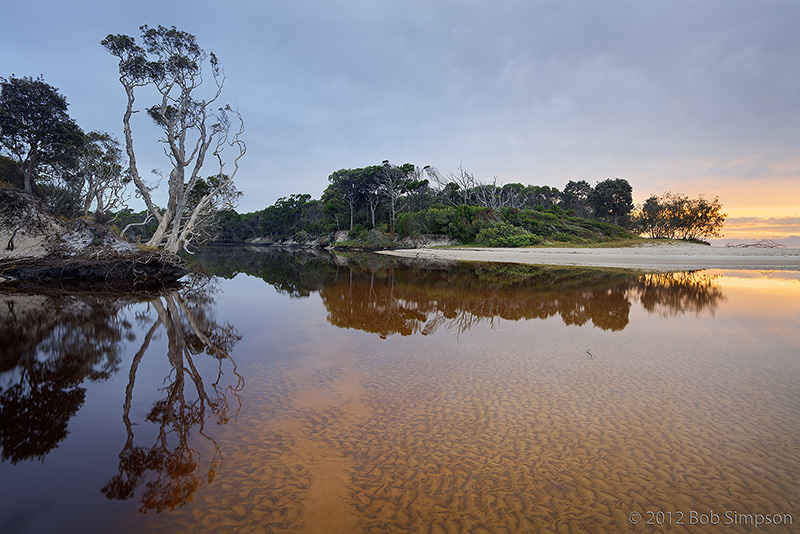 The 4wd was still bogged when I took this....it's just out of frame to the right.

Favourite reflection
I think every landscape photographer keeps her or his eye out for reflections to add impact to their images. I came across quite a few cool reflections over the course of the year but this one from Golden Beach in December is one of my favourites. I don't really understand the science behind how this weird pattern of red, pre-sunrise light formed, but the big red arrow created by the reflection is a real doozie. If someone else had taken the photo I might suspect it was a bit of Photoshop trickery, but I have the original RAW file to prove it's not. I can't recall seeing anything quite like it before. 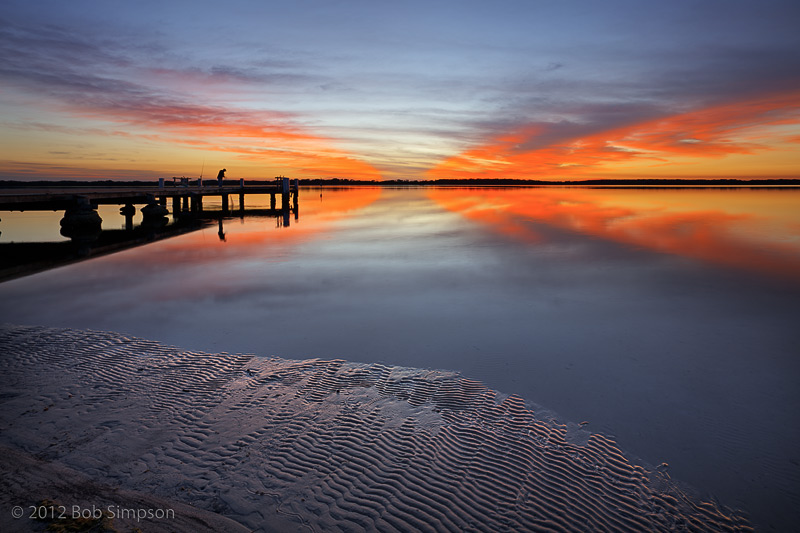 Best bird shots
Bird photography requires a lot of patience and specialist gear....neither of which are abundant in my camera bag. But if the opportunity presents itself, I'm happy to accept the challenge. These are two of my more interesting bird images from 2012. The flock of terns was roosting near Pincushion Island one morning in March, and began to take to the air as more walkers came along the beach. There was a large element of luck in capturing this image - the birds were hovering over the sand spit and began to dive back down to ground level, so I just kept shooting, not really knowing what would turn out. The result is pretty cool I think - I couldn't have planned the result but I'll take any credit that is thrown my way. The other image of two reef herons, a dark and light colour morph, was captured at Caloundra Head. I was carefully shuffling closer and closer to the dark bird trying to get in a good position to photograph it as it hunted in the rockpools, when the white one landed right in front of me and filled my viewfinder. It's probably nothing special as bird images go, but I think it's quite a nice portrait of birds in their element. 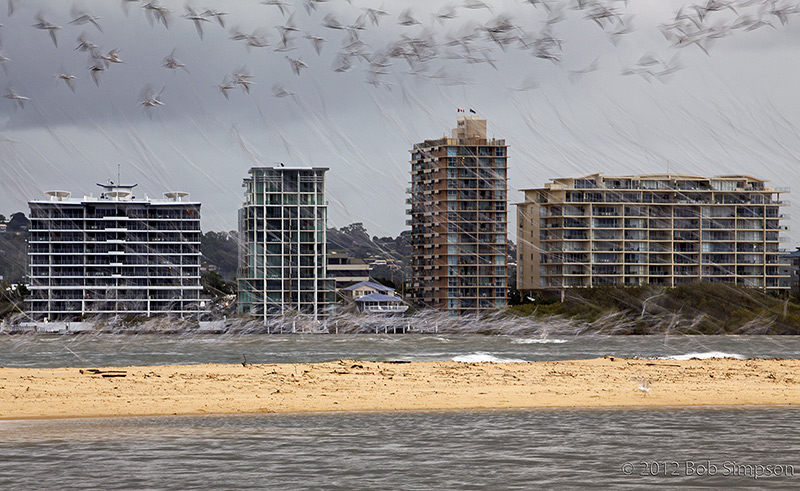 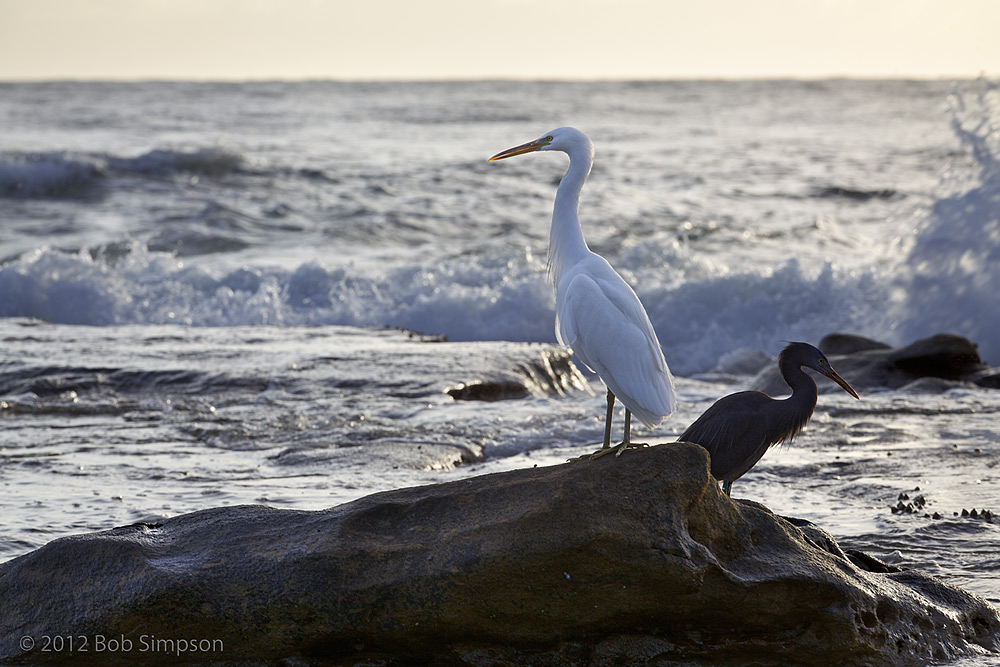 Best face in the rocks
I didn't notice this profile of a Mayan chief in the rocks at Point Cartwright until I got home and looked at the image on my computer. And being only 10 days before the forecast end of the world, I of course assumed that it was an omen of the destruction to come. I'm a little disappointed to be honest....maybe they just got the date wrong. 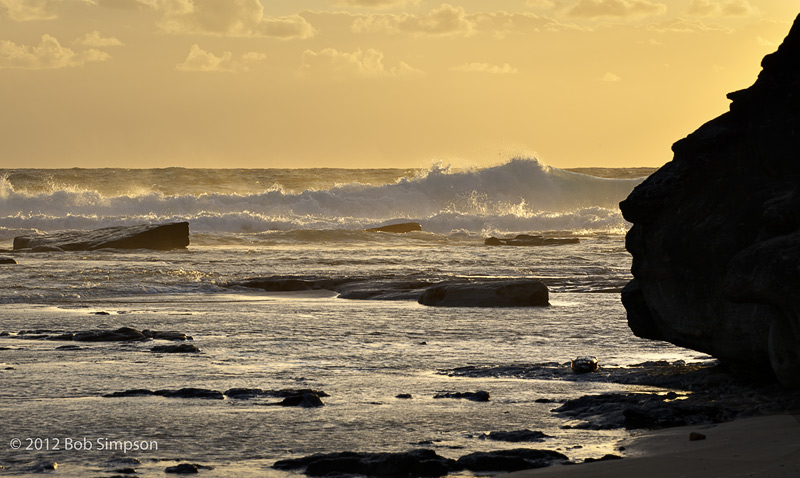 Greenest place
This was a no-brainer....New England National Park is the greenest place I've ever seen. Even in the camp ground the trees are dripping with hanging moss and ferns poking out of every nook, but step into one of the Antarctic beech forests and the greenness goes off the scale - tree trunks, cliff faces, boulders and logs are all cloaked in vibrant green moss, more hanging moss is draped through the tree branches, giant tree ferns spread out to shade the forest floor, and all manner of other ferns fill in the gaps. Kermit would be in his element.

Wettest shorts
Standing on a rocky shore photographing waves coming towards you with a wide angle lens is good sport, but it's guaranteed to get you a little wet at times. Every now and then, the waves rush in with more force than expected...like on this morning at Coolum Beach. If this image gives the impression of being right in there amongst the action, that's because I was. It wasn't dangerous or cold, but the hour drive home in a soggy pair of shorts (because I'd forgotten to bring spares) was definitely uncomfortable. But the camera was fine! 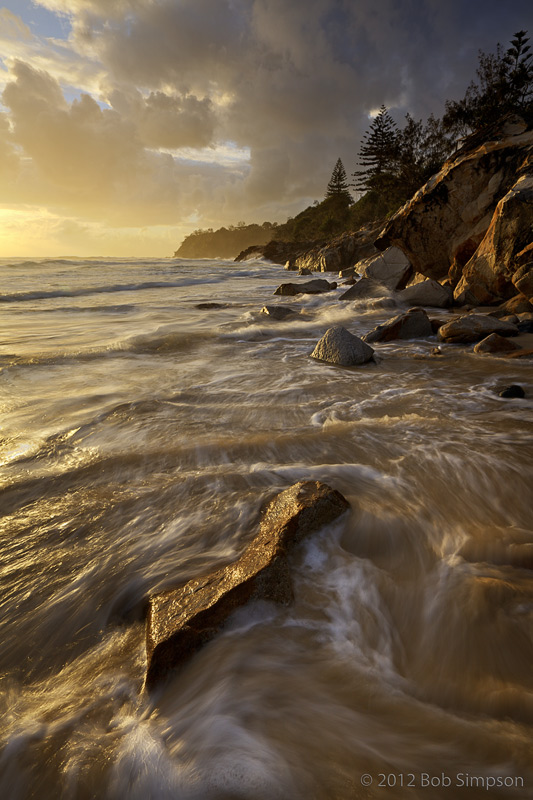 Best moon shots
I'm not an avid chaser of moon-set or moon-rise images like some photographers but I certainly keep an eye out for a low moon that can be worked into a landscape image. This first image turned out to be one of my favourites for the year....taken from the Dandahra Crags in Gibraltar Range National Park in June. The second image was more planned....friend and fellow photographer Barbara Burkhardt suggested an early morning moon-set session at Bribie Island and this was my best result. The big, golden reflection of the moon on Pumicestone Passage is one of the best I've managed. 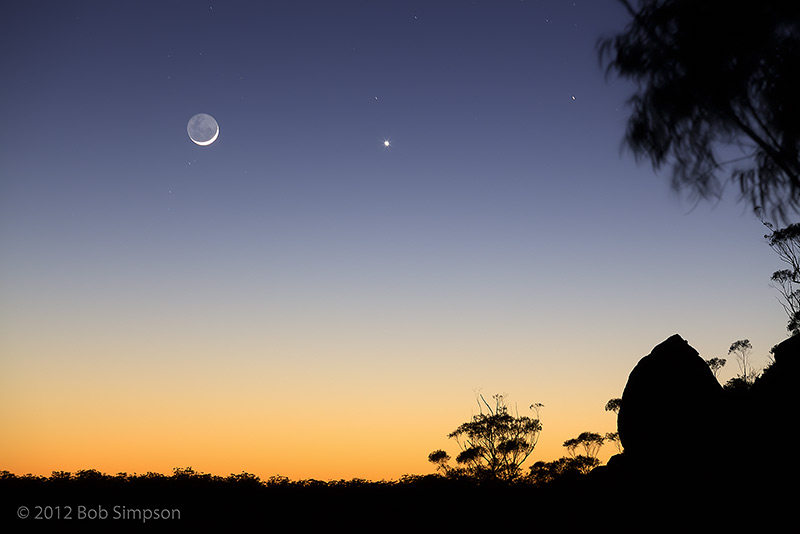 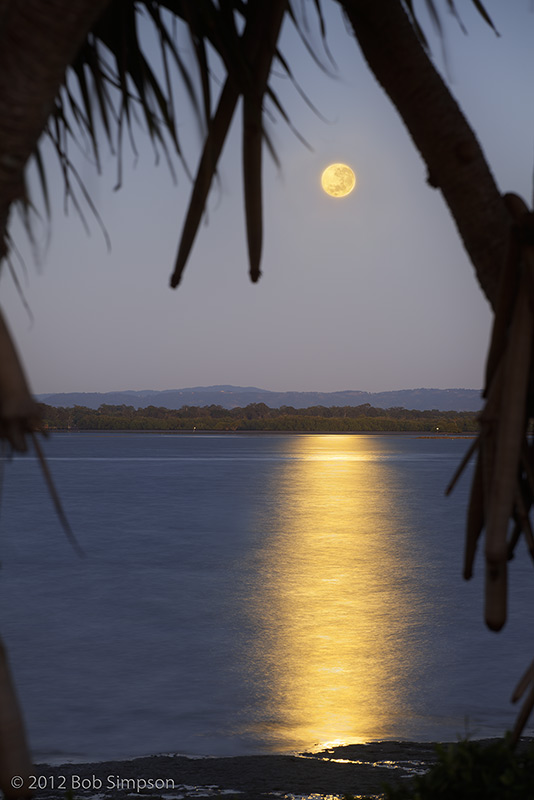 Most huggable rocks
I discovered these boulders on the beach at Granite Bay in Noosa National Park in October...I'm sure plenty of others have discovered them before me, but they were new to me. They are just the most beautifully smooth and polished boulders I've seen and the soft shades of blue and grey make them even more endearing! If I was going to get a pet rock, it would be one of these. 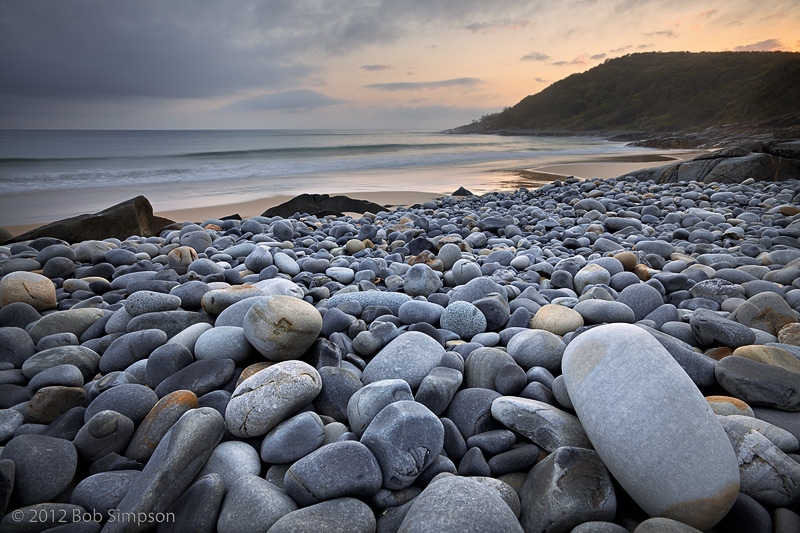 Most spine-tingling, eye-watering moment
The greatest joy of landscape photography is spending time in the great outdoors and being a part of what is happening around you - bringing home an image that captures some of what you felt at the time is icing on the cake. I had many great experiences over 2012 while out chasing new images - spectacular sunrises, encounters with wildlife, dramatic changes in weather, and sublimely peaceful moments just sitting and taking in the natural world. Sittiing at the very top of this list was my morning up at Wright's Lookout in New England National Park on a freezing July morning. I've described my experience in an article, here, but briefly it was one of those moments that literally took my breath away....when natural beauty and grandeur made me feel incredibly small and insignificant, but also completely connected with the world around me. Okay, that's enough of the deep and meaningful - suffice to say it was one of my most memorable moments of 2012 and it just makes me want to get out there in 2013 and find another one just like it. 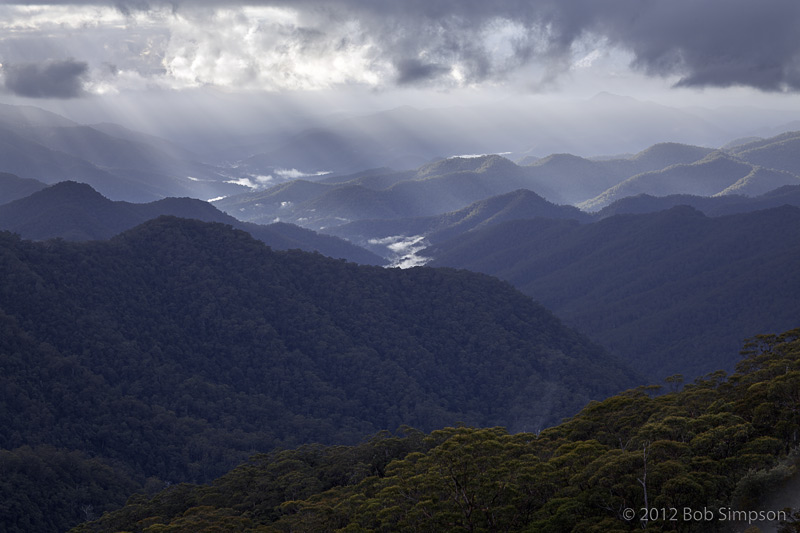 Through the past, lightly - images of 2014
Musings on photography
I snapped the image above from a rock outcrop in Mount Kaputar National Park in July 2014. I remember how good the first sunlight of the day felt on my face after an hour or more of scrambling about t...
7389 Hits
2 comments
Read More

Exposure blending
Tips & techniques
This is a technique I use on a lot of my images to try and show the full dynamic range of a scene as is visible to the human eye. Digital camera sensors are very good at what they do but they are no m...
7012 Hits
0 comments
Read More