Golden Wattles and a Full Moon 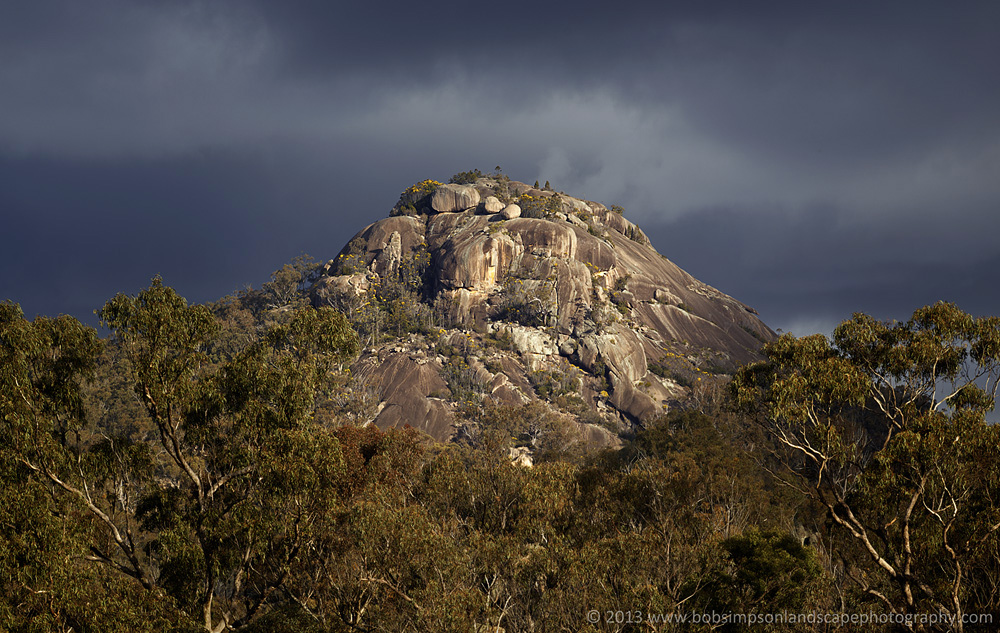 In July this year (2013) I spent a few days at Girraween National Park in the Granite Belt of southern Queensland. This is a popular camping spot for families in the warmer months, but the colder temperatures of mid-winter often see the camp-grounds close to empty. I guess that's understandable, but if you're prepared to fend off the cold, the reward is glorious blue skies framing some of the best walking country I know - and the opportunity to have it all to yourself.

It had been a couple of years since I last visited Girraween but not a lot changes in an ancient rocky landscape like this. Having photographed many of its most popular features before, I arrived with some clear targets in mind. One of these was a pre-dawn hike to the top of Castle Rock with its panoramic views over the whole park.

I set off from the campground at 4.30am with the temperature sitting just above zero. Half an hour later I took the left fork in the trail and started up the final half-kilometre scramble to the top of Castle Rock. The ascent is steep in places but not difficult if you have a moderate level of rock-hopping experience. The track winds through dark, narrow crevices between huge boulders, and over expansive slopes with only white paint markers to guide your course. These open slopes are the places that get my nerves tingling - one stumble and fall and there's nothing to stop you ending up among the trees hundreds of metres below. But the granite offers great grip when it is dry, and by 5:20am I was scrambling up the last rock chute and onto the undulating expanse of the summit. 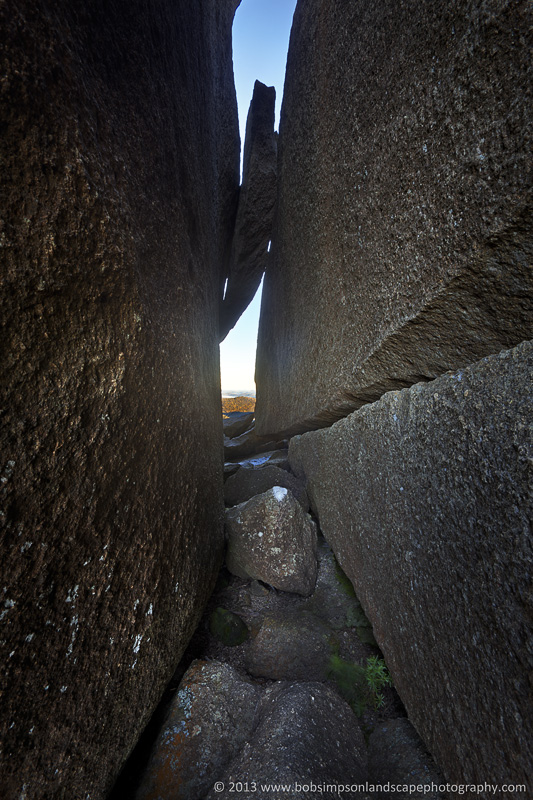 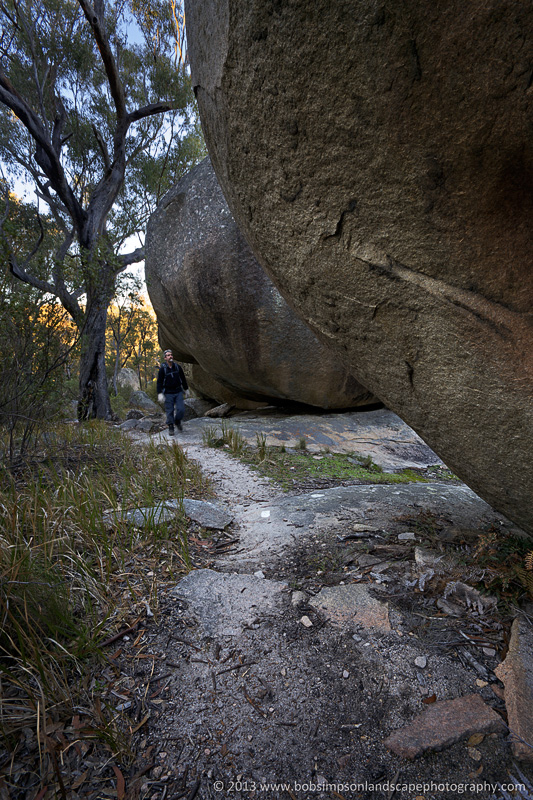 The cold morning air had seemed very still down in the woodland, but on the summit a stiff south-westerly breeze made it feel much colder than it was. A blazing full moon hung low in the sky to the west and only a faint promise of the sunrise to come warmed the eastern horizon. I found a spot for my pack, donned an extra fleece, beanie and gloves, and set off to explore around the summit by torchlight for photographic vantage points.

With the moon hovering just above the horizon, I set up several compositions along the western edge of the summit to try and capture the moon-glow over the woodlands below. The image below is my favourite - it was taken about 20 minutes before sunrise with my zoom lens set at 17mm, f11, ISO200 and a shutter speed of 30 seconds. This exposure time was just short enough to avoid any obvious movement of the moon. 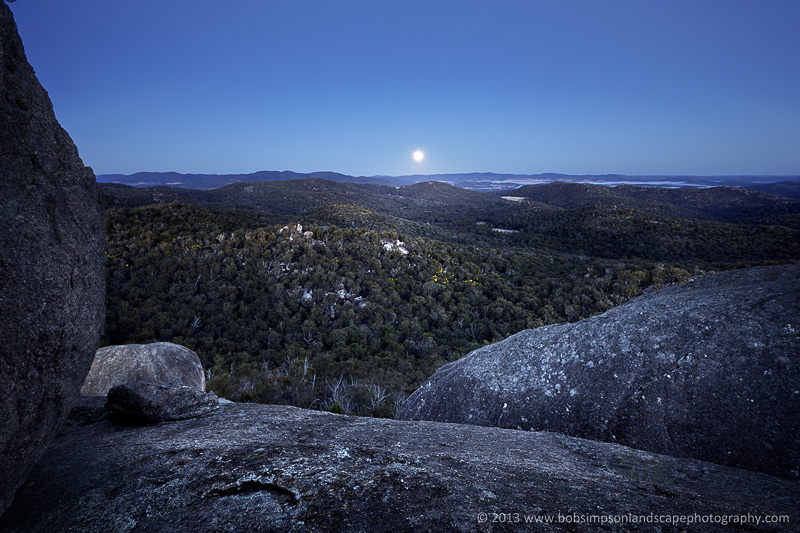 Back towards the east, the glow of sunrise was growing but I struggled to find any worthwhile compositions. There was only a little sliver of cloud low in the sky and very little colour developing - also, the horizon to the east is distant and quite flat and (relatively) uninteresting. So I decided instead to move over to the southern part of the summit where there were some big boulders and flowering wattles for foreground interest, and the shape of Mount Norman not far distant to add shape to the horizon. Then it was just a matter of setting up and waiting a few minutes for the sun to rise and send its first rays of the morning across my field of view. 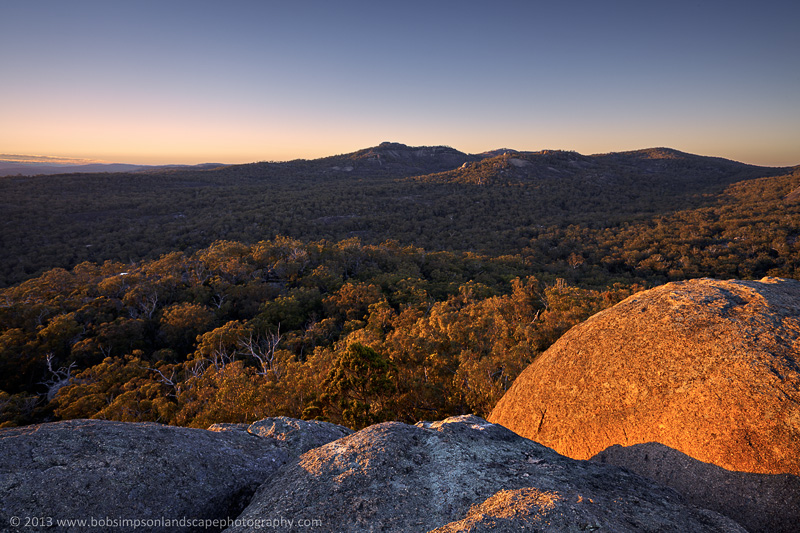 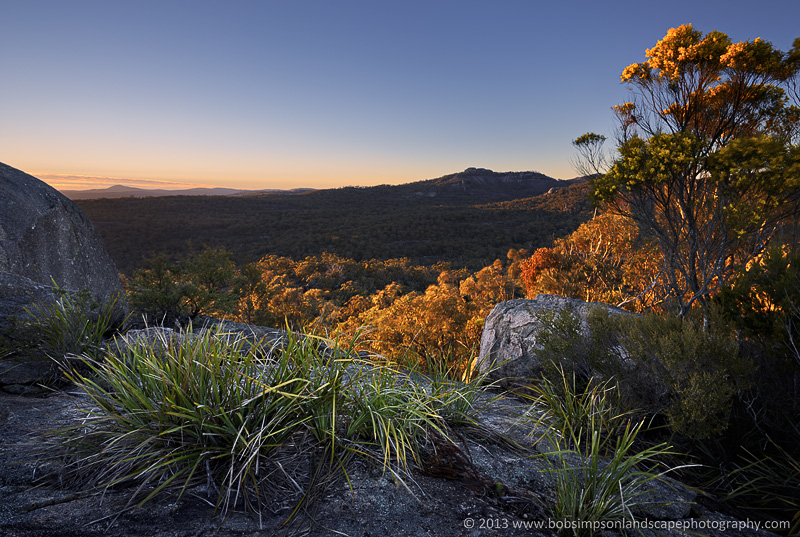 One of the things I noticed throughout my stay at Girraween was the way that the yellow wattle blooms light up in sunlight - more than light up, they glow as if they were on fire. Checking through my RAW files on returning home, it was common to find the over-saturated yellows causing the out-of-gamut warning in my RAW converter to go crazy before I’d even taken the files into Photoshop to add a little contrast and colour. If left as it is, this can cause the detail of the wattle flowers to be lost in a blob of yellow, so some selective desaturation and/or darkening is needed to get things under control.

That’s a technical take on the ‘problem’ - from an emotional point of view, seeing such vibrant natural colours come to life like this makes the minor inconvenience of having to correct the images later seem irrelevant. If we can’t take the time to just enjoy nature’s little spectacles for what they are, then we’re missing the point. My overriding memory of this trip to Girraween is the dazzling contrast of golden wattle blossoms against a deep blue sky - it’s something not to be missed.

With the sun well and truly risen and my stomach grumbling for food, I packed up and made my way back down from Castle Rock. My only stop was to photograph a little stand of wattles glowing in the morning sunlight, and then it was back to camp where most of the other campers were still in bed. They don't know what they missed! 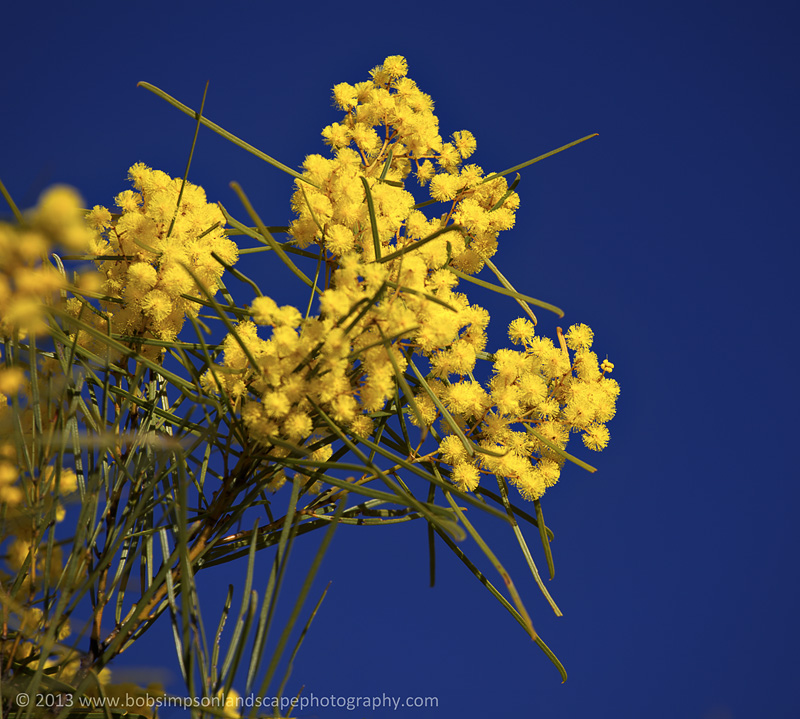 Through the past, lightly - images of 2014
Musings on photography
I snapped the image above from a rock outcrop in Mount Kaputar National Park in July 2014. I remember how good the first sunlight of the day felt on my face after an hour or more of scrambling about t...
7941 Hits
2 comments
Read More

Exposure blending
Tips & techniques
This is a technique I use on a lot of my images to try and show the full dynamic range of a scene as is visible to the human eye. Digital camera sensors are very good at what they do but they are no m...
7269 Hits
0 comments
Read More

Summit Falls
Locations
I first heard of Washpool National Park more than 25 years ago when I was given a coffee-table book of Australia's wilderness areas for Christmas. To a boy from a farm in rural Victoria,  the ima...
6717 Hits
2 comments
Read More
Back to top