In June I spent four days exploring one of my favourite winter locations, Gibraltar Range National Park in New South Wales. I've been coming to this rocky, rugged area high in the Great Dividing Range for 9 years now and one thing I've learnt is to pack all my winter woollens. Below-freezing nights and heavy frosts are the norm in June, but it was positively balmy this trip...the thermometer struggled to dip below 10oC the four nights I was there, so my down sleeping-bag was overkill and most of my warmest clothes stayed packed away.

I set up camp at Mulligan's Hut campground on a cool, windy afternoon and used it as my base for hikes to some of my favourite spots over the next four days. Surprisingly I had the campground all to myself for 3 of the 4 nights - the Park Rangers did their rounds every morning and a few day-trippers came and went from the picnic area, but otherwise it was blissful solitude. Except I did make good friends with the resident family of scrubwrens who were constantly hopping and flitting about camp like winged mice searching for any little crumb I might have dropped. If you sit quietly they will hop up onto your boot or even your arm as they do their rounds.

Despite the unseasonally warm nights, the days were cool and great for hiking. I spent a lot of my time on the walking trails but still only got to visit a few of the spots I had in mind - Gibraltar Range is a big place, and four days just aren't enough! Here is a taste of what I found.

Surveyors Swamp is just one of many low-lying, swampy areas in the National Park. I've read one theory that suggests the swamplands were permanent snow and ice-fields during the last ice age, and that is an easy picture to conjure especially on a winter morning when the swamp grasses are blanketed in frost. No sign of frost this time though - I was quickly down to a t-shirt for the 45 minute hike by torchlight to get to this spot before sunrise.

As it turned out, sunrise didn't hold any great surprises in terms of photographic potential - the cloud-free sky changed from black to blue without much fanfare, and there was no mist or dew to soften the light. But I always enjoy the sense of distance created by a low perspective on the swamp and captured the first image below a few minutes before the sun broached the horizon. 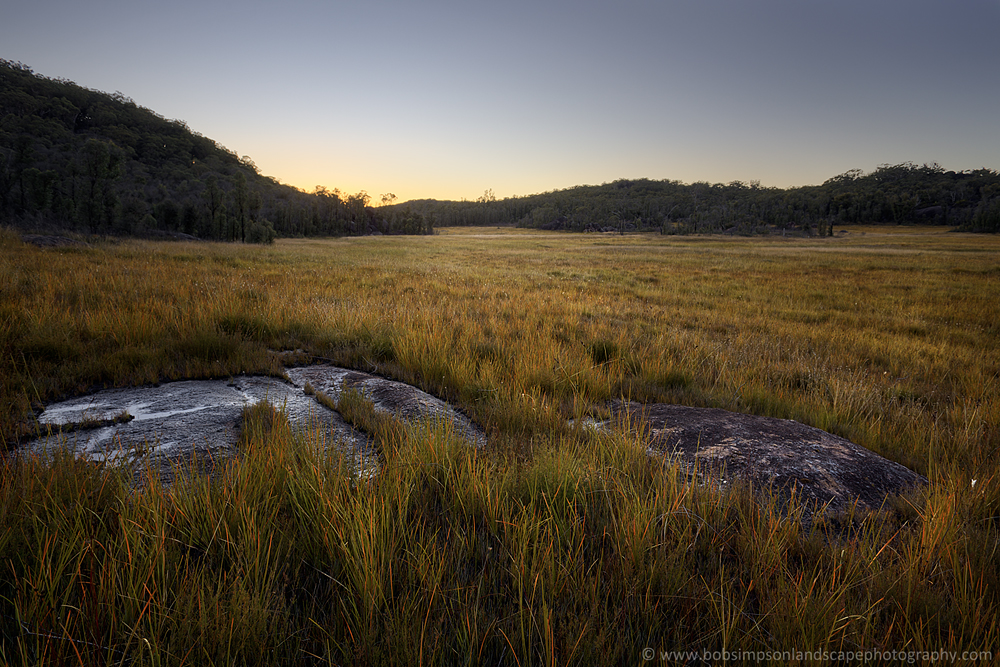 The real highlight of the morning came when the sunlight crept across the swamp turning the multi-coloured stalks of swamp grasses to a sea of gold. A golden swamp under a blue sky is, to me, one of the defining features of Gibraltar Range in winter and one of the Park's visual treats that I always love to revisit. Nine years after first snapping this scene with my old Olympus compact, and after photographing it many times since, I still get excited to see what a new morning will bring on the swamp. And once again, I wasn't disappointed. 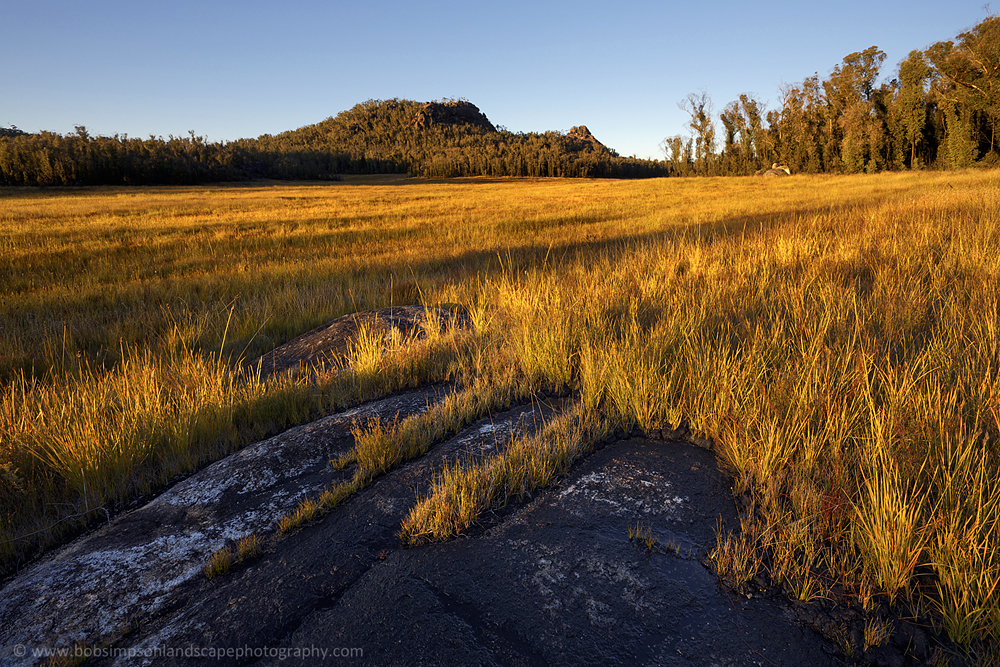 I've known about Dandahra Falls since my first trip to Gibraltar Range - it's mentioned on the Park information board and on maps as the highest waterfall in the National Park, but the only walking track that gives a partial view of the falls has been closed for years because of landslips. This is really steep country so there didn't seem to be any safe way for a sometimes-clumsy photographer to navigate his way to a position to be able to photograph the waterfall.

So I was surprised this trip when one of the Rangers asked me if I'd photographed Dandahra Falls - in the conversation that followed I learnt that a new walking track had been surveyed that would lead to a better view of the falls from further downstream than the old, now closed access point. The new route had been marked with pink tape and was, according to the Ranger, pretty easy to follow but a little steep in places.

Early next morning I hiked the 2km to Lyrebird Rock and quickly found the first ribbon of pink tape leading away from the main trail. A rough foot-pad wound through the tall forest at the top of the ridge before the trail began to drop down the forested hillside and into a deep gorge. The Ranger's suggestion that the track was a little steep in places was correct but somewhat understated - it was more than a little steep as well as slippery from recent rain for the half hour descent before I began to catch glimpses of Dandahra Falls through the trees.

The final pink ribbon was hanging from a tree on the edge of a flat rock outcrop perched well above the floor of the gorge. The view back to the falls was filtered through tree branches, and while spectacular, was not as clear as I would have liked for a photograph. I looked around to see if there was a way to get further down, and started making my way down a rocky gully, sliding on thick leaf litter and sending rocks tumbling ahead of me. It didn't take me long to realise this wasn't a really safe option so with the way ahead just getting steeper, I worked my way back to the edge of the cliff and found a view of the falls that was mostly clear of trees.

The two images below were captured from the same spot. The steep slope of the foreground in the first image is no exaggeration - my nerves were tingling as I worked my way towards the edge of the cliff and then sat behind my tripod to frame the shot. Being so early in the morning it was still fairly dark down in the gorge, so my first choice was whether to boost the ISO setting to achieve a faster shutter-speed and freeze some of the motion in the water and trees, or leave the ISO low and capture the highest quality, least noisy image possible. I chose the latter for the first image, which accounts for the blurry vegetation in the bottom half of the frame - I felt the amount of blur didn't really detract from the overall scene, and there was a gusty wind so the motion blur seemed appropriate. For the second image I increased the ISO to 400 so as to shorten the exposure time and capture a little texture in the falling water.

I tried in several places along the cliff edge to see to the bottom of the falls but whatever was down there stayed hidden from view. I've since learnt that the plunge pool at the base of the falls is very narrow, and runs almost at right angles to the direction of flow so you would need to be almost directly above it to catch a glimpse. There is a great article by two intrepid adventurers who made it to the base of Dandahra Falls here. 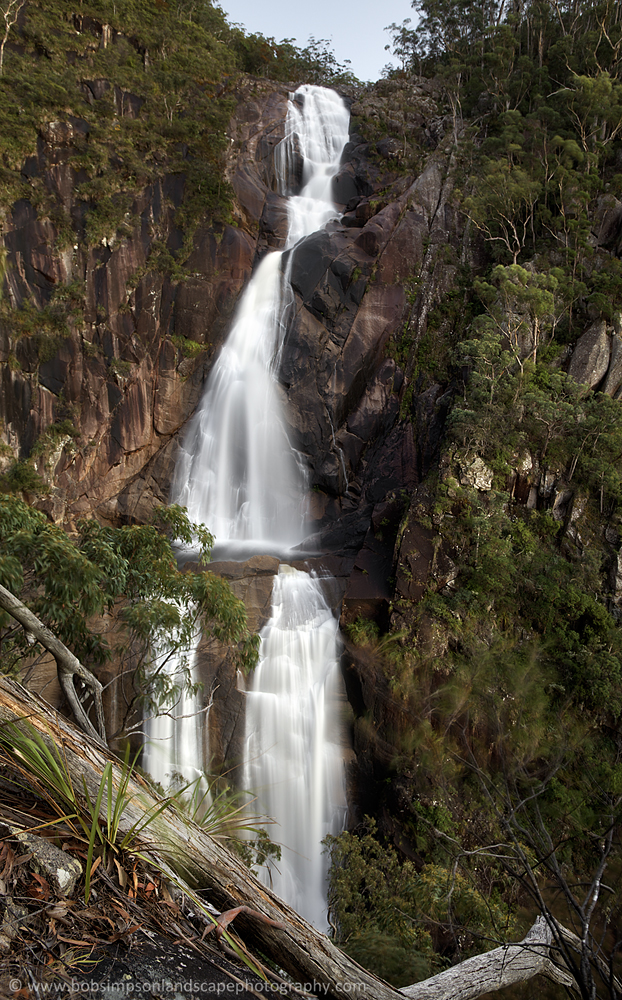 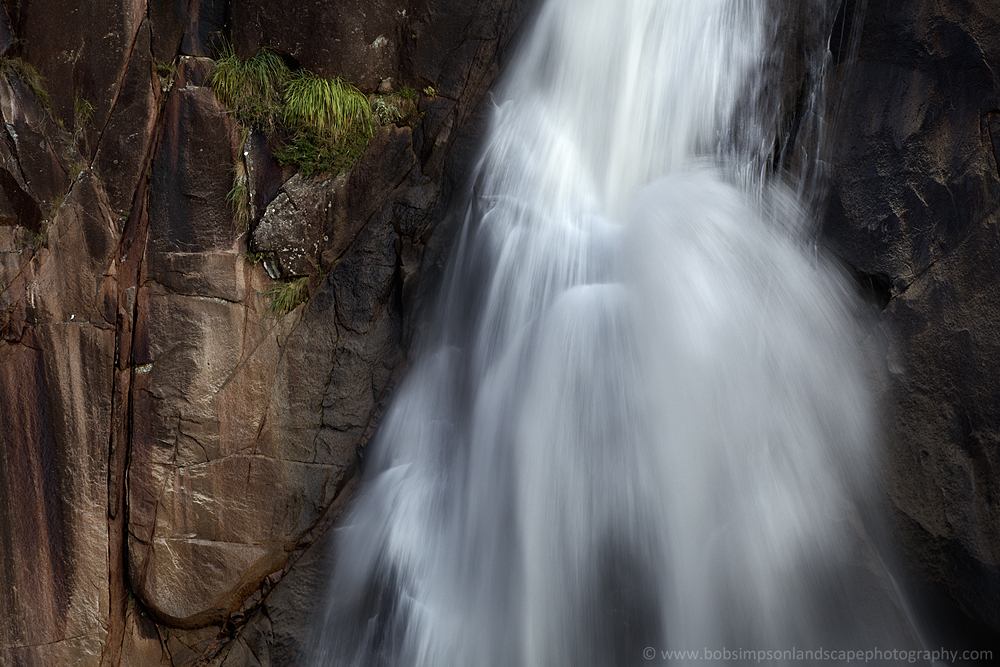 Fifty minutes after leaving camp my torch finally picked out the sign marking the turnoff to the Tree Fern Forest. The trail to this point had been mostly uphill but from here it takes a sharp turn down through steep forest before levelling out beneath a canopy of towering tree ferns and 50-60 metre high Sydney blue-gums. The sky was already beginning to lighten when I arrived, throwing pools of light onto the forest floor wherever a gap in the canopy allowed and giving me a subject for the first image below.

Light levels are usually pretty low beneath the canopy so long exposures are often required - that was no problem on this morning because there was barely a breath of wind to ruffle the vegetation, even during the 30 second exposures of the first two images. I swapped between a wide-angle zoom and a medium-telephoto zoom during the session, trying to pick out cohesive scenes from the chaos of greenery.

The walking track offers the only real vantage point for photography, because to step off the track lands you straight in a head-high tangle of ferns and vines. I did attempt to go off track on a previous visit, and recall I covered about 20 metres in 20 minutes before giving up. It's not worth the damage you do to the vegetation and to yourself for the sake of a photograph - now I leave it to the wrens and bandicoots. 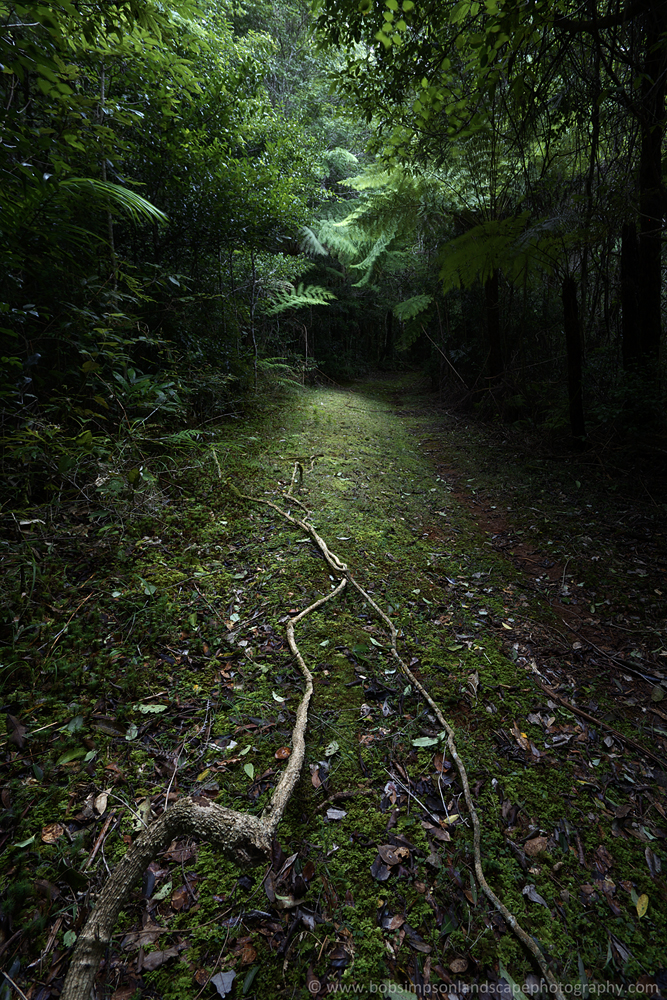 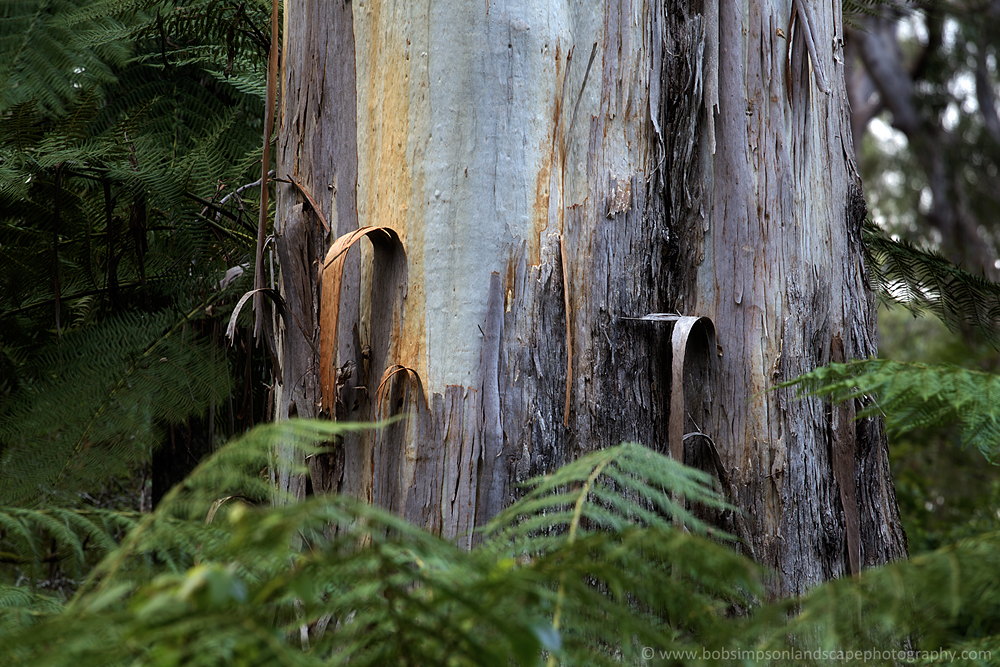 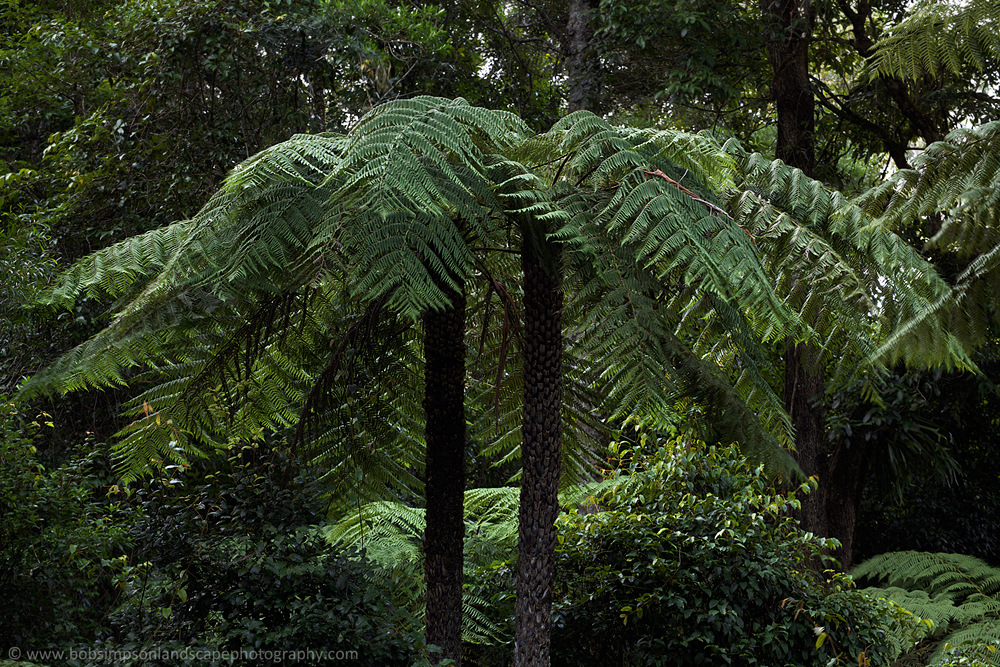 The change in scenery once you exit the cover of the Tree Fern Forest is dramatic - the tall forest quickly gives way to open woodland then swampland and rock outcrops. The trail winds for 3-4 kilometres around swamps and over, rocky ridges before it drops back down to Little Dandahra Creek and eventually the campground.

Along the way, one of the highlights is this rocky cascade that spills off the side of a low hill - it's a small stream and doesn't usually flow as strongly as this but recent rain had swelled the flow making the cascades especially picturesque. There aren't any tree-free views of the cascades from the rocky hillside where I was standing, and no easy routes down to the base of the falls, but the gnarled little stringybarks that fringe the cascades add an unmistakably Australian flavour to the images I captured. 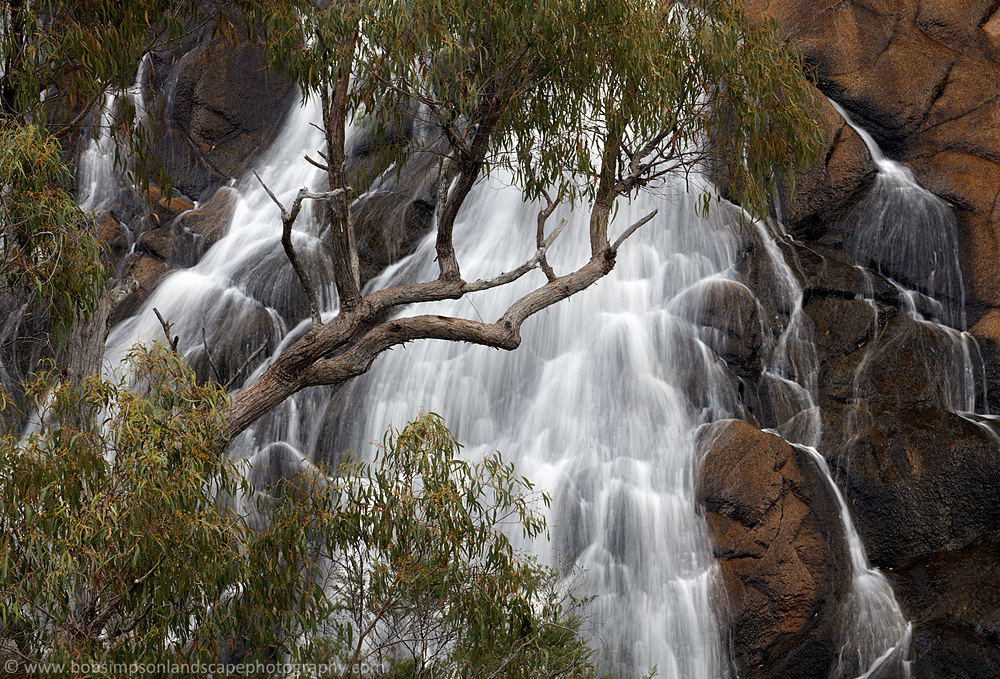 The campground at Mulligan's Hut nestles into a bend of Little Dandahra Creek so there are always close options to photograph cascades and other stream-scapes. Barra Nulla Cascades is an easy 5-10 stroll from the campground - the trail ends on a rocky bank of the creek and from here you have to find a place to cross and rock-hop downstream 100 metres to where the main cascades begin. If you're like me you could easily spend hours photographing this section of the creek, but there are still plenty more visual treats to be discovered if you follow the creek downstream - some of the rock-hopping is a little steep and treacherous so you need to be prepared for an adventure but every corner brings a new cascade or rock pool, and with every step you push deeper into the heart of the Gibraltar Range wilderness. 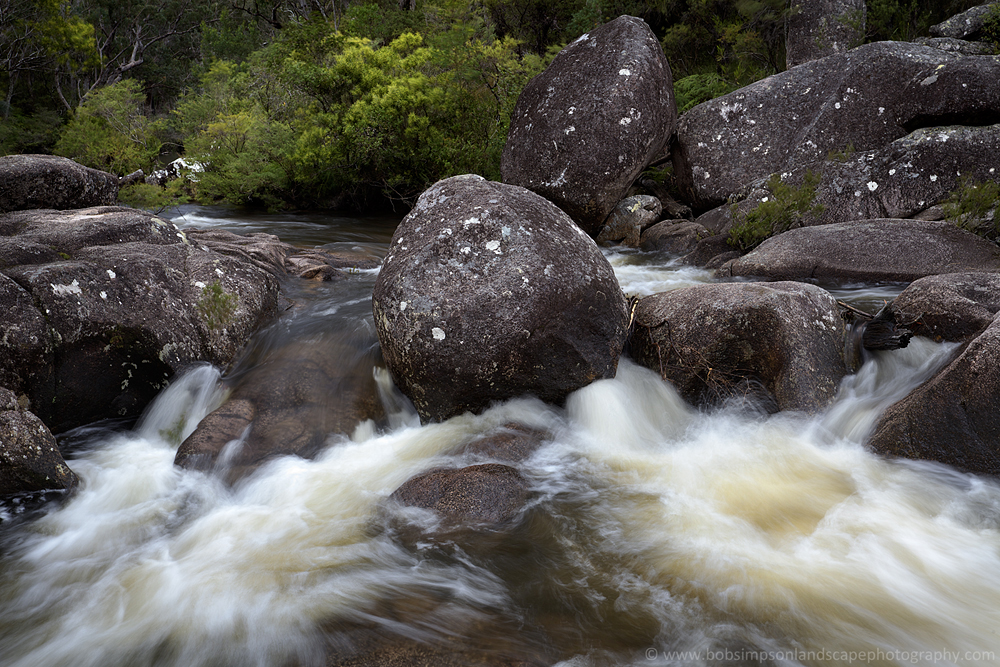 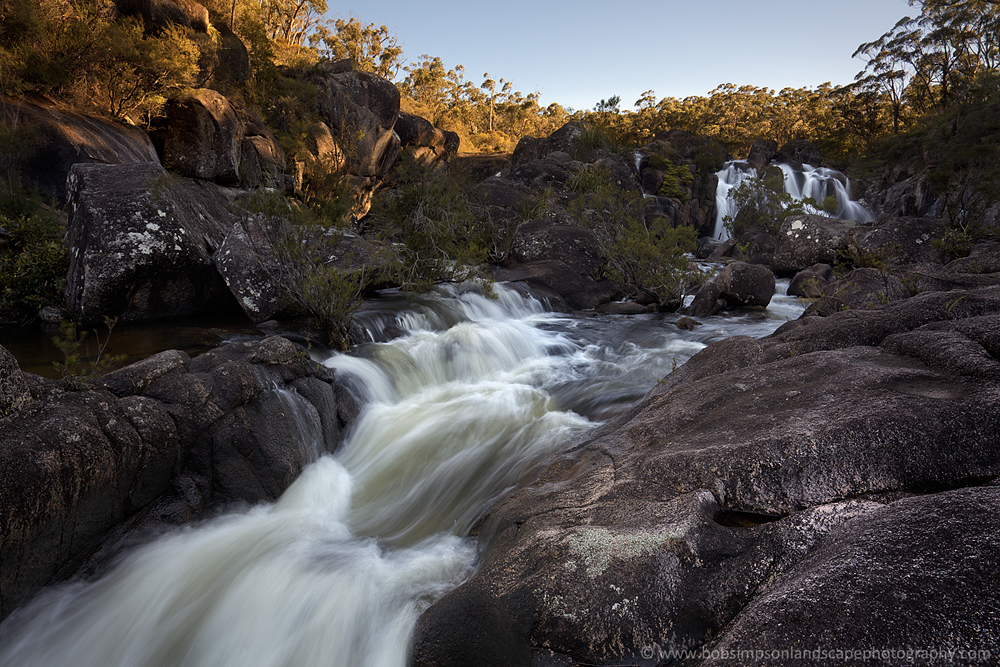 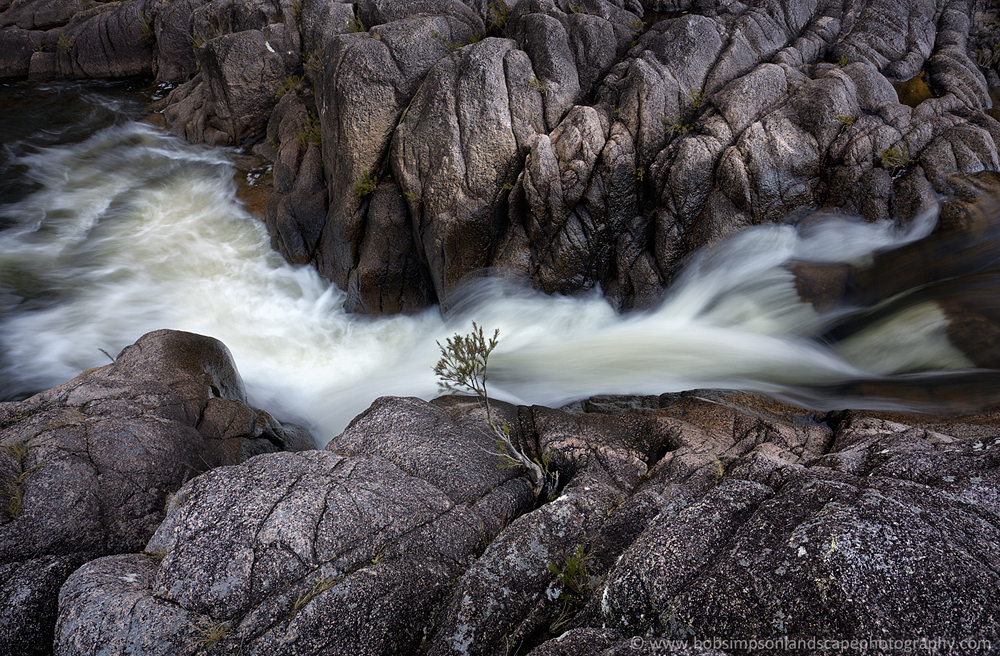 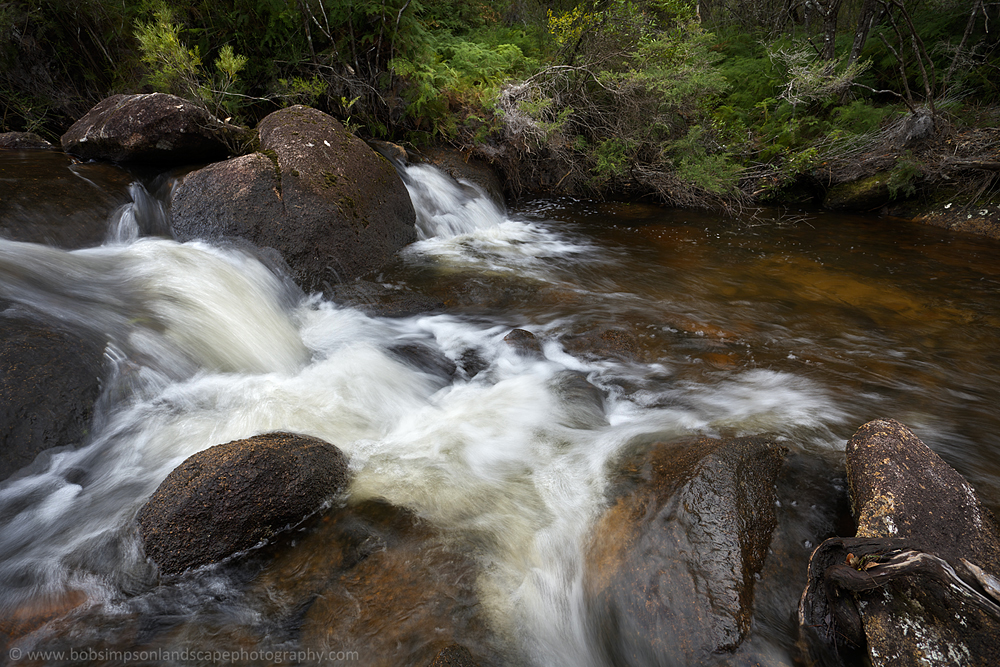 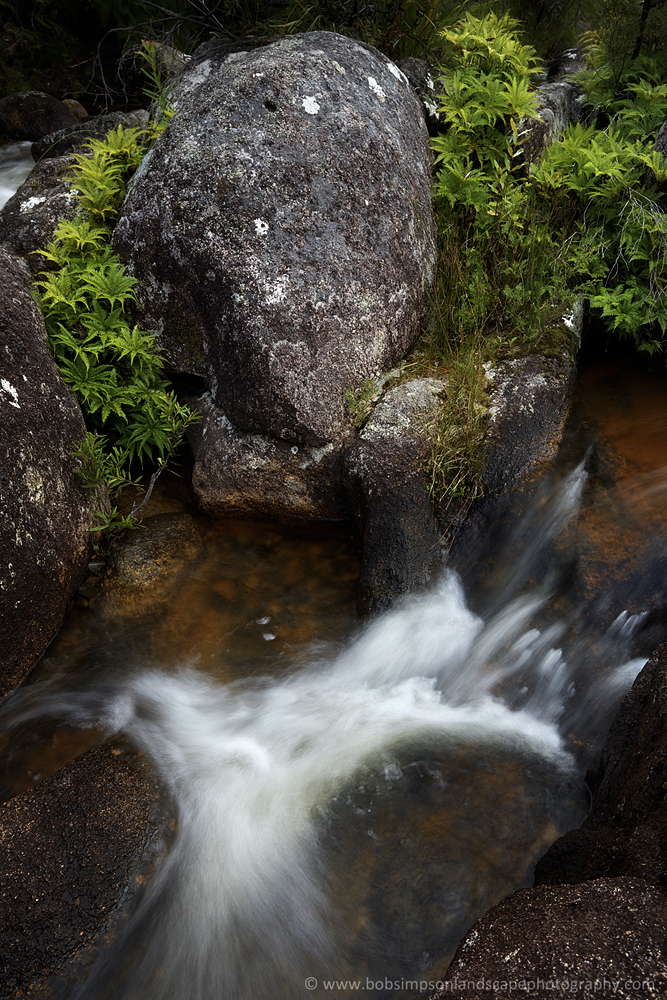 I'm sure I've said it before, but there really is a lot of variety for a landscape photographer in Gibraltar Range National Park. The four days I spent there this time took me from open swampland to tall, wet forest to a cascading mountain stream - next trip I plan to revisit some of the spectacular rock features like the Dandahra Crags, Anvil Rock and the Needles. It makes me want to go and put on my hiking boots just thinking about it.

Through the past, lightly - images of 2014
Musings on photography
I snapped the image above from a rock outcrop in Mount Kaputar National Park in July 2014. I remember how good the first sunlight of the day felt on my face after an hour or more of scrambling about t...
7556 Hits
2 comments
Read More

Exposure blending
Tips & techniques
This is a technique I use on a lot of my images to try and show the full dynamic range of a scene as is visible to the human eye. Digital camera sensors are very good at what they do but they are no m...
7114 Hits
0 comments
Read More