Dec 30 Posted by Bob Simpson in Musings on photography

Choosing favourite images is always a difficult task, and even moreso when they are your own images. It's extra hard to be objective with your own work when each image comes with a suite of memories - sounds, smells, weather conditions, and how you felt at the time - that cloud your ability to see the image purely as a visual representation.

The collection below includes many of my favourite images from the past year, and in some cases they probably made it onto my shortlist for reasons other than just their visual impact. At the same time, I wouldn't have included them if I didn't think they represented some of my best efforts for 2012.

My work is done....now you can be the judge! I hope you find them at least interesting, and hopefully worthy of a 'best-of' list. 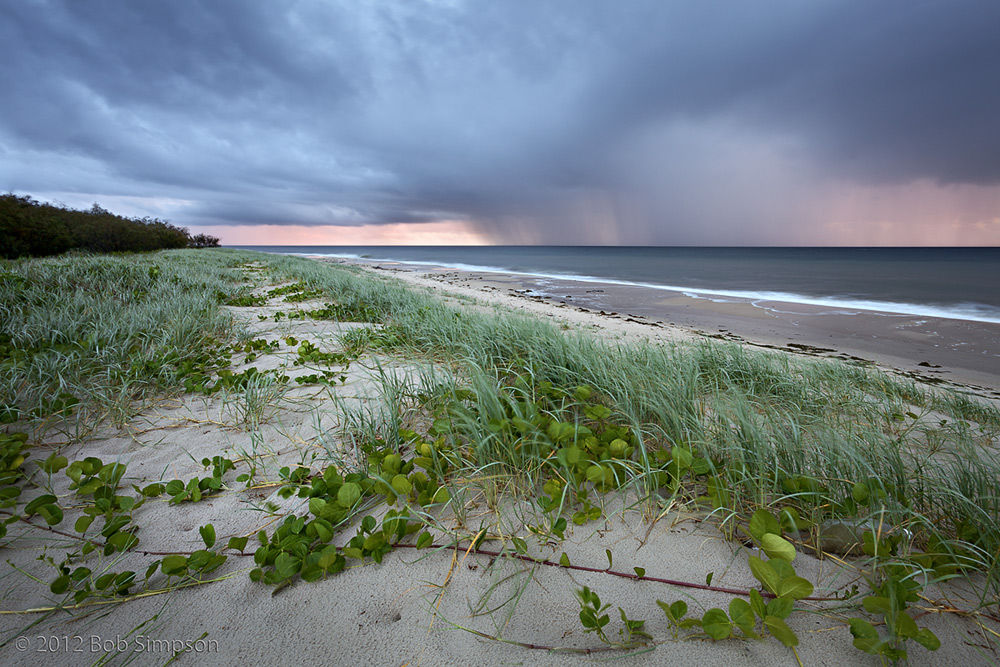 This was a wet but warm morning with plenty of ominous clouds hanging low in the sky. It rained for most of the 20 minute walk to get to this spot, and then cleared for 10 minutes just after sunrise giving me a chance to capture this scene and a couple of others. Shortly after, the rain you can see out to sea swept onto the beach and gave me a good drenching. It's only a simple composition, but it is the combination of colours that appeals to me most about this image...the steely-grey sky, pink horizon and soft green beach grasses make this stand out in my collection. 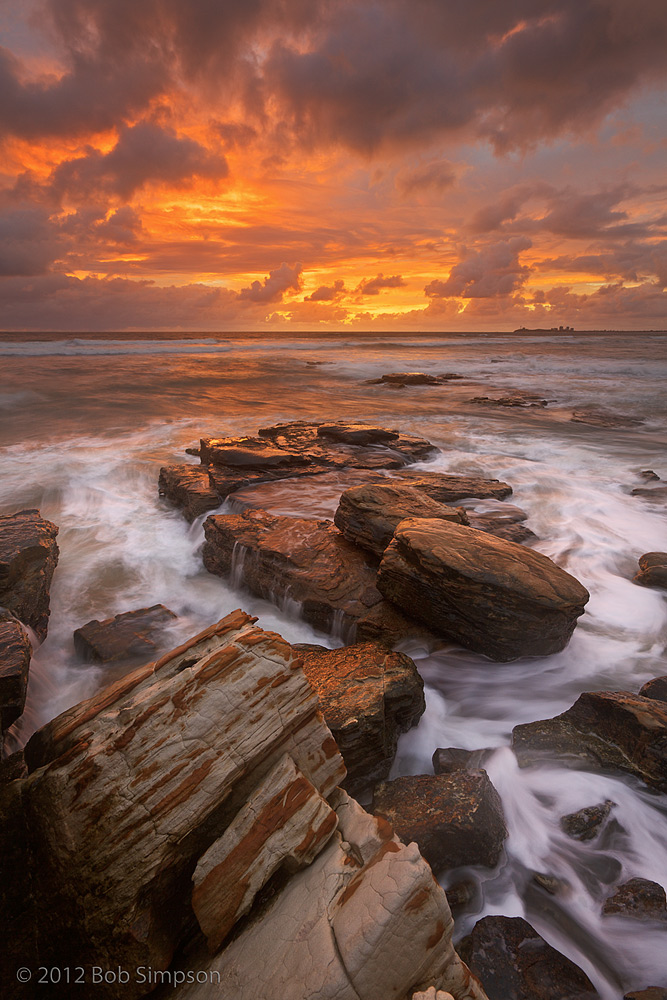 Another drizzly morning, but this time punctuated by a brilliant display of colour at sunrise. The colour only lasted a few minutes and I managed to capture this image and a similar landscape-oriented image before it faded. The landscape image was taken a minute or two before this one and the light is a deeper red colour (you can see it here)....it's a good reminder of how quickly the light changes at this time of day. 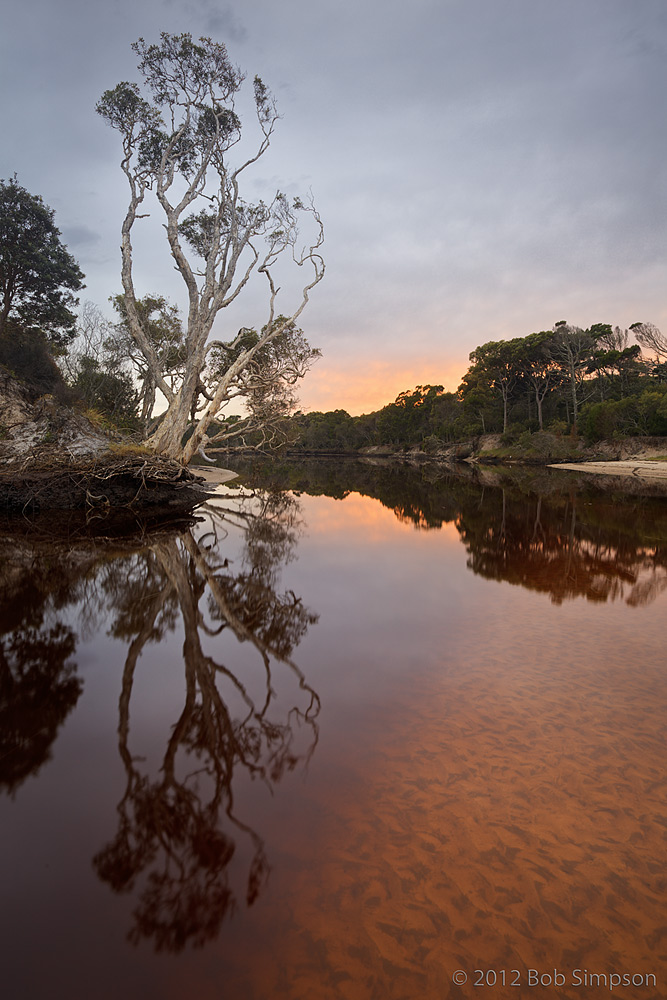 It took a little manoeuvring, and some wet feet, to get into position so the reflection of this big, old paperbark fell in the darker, deeper water of the creek. Thankfully the water wasn't too cold....it was actually quite pleasant wading in the shallows, although I had to stay very still for a minute or so before pressing the shutter release to let the ripples on the water disappear. 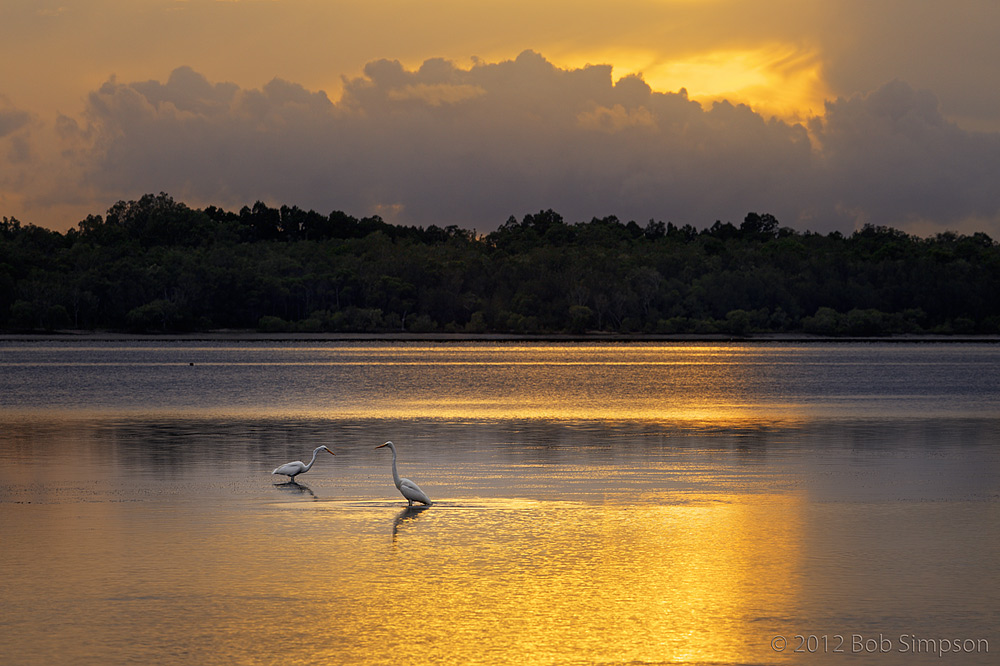 A very simple composition made interesting by the golden sunrise and the two not-very-willing subjects. It took some patience and some sideways shuffling on my part to capture the egrets in a reasonably natural pose in the golden reflection. 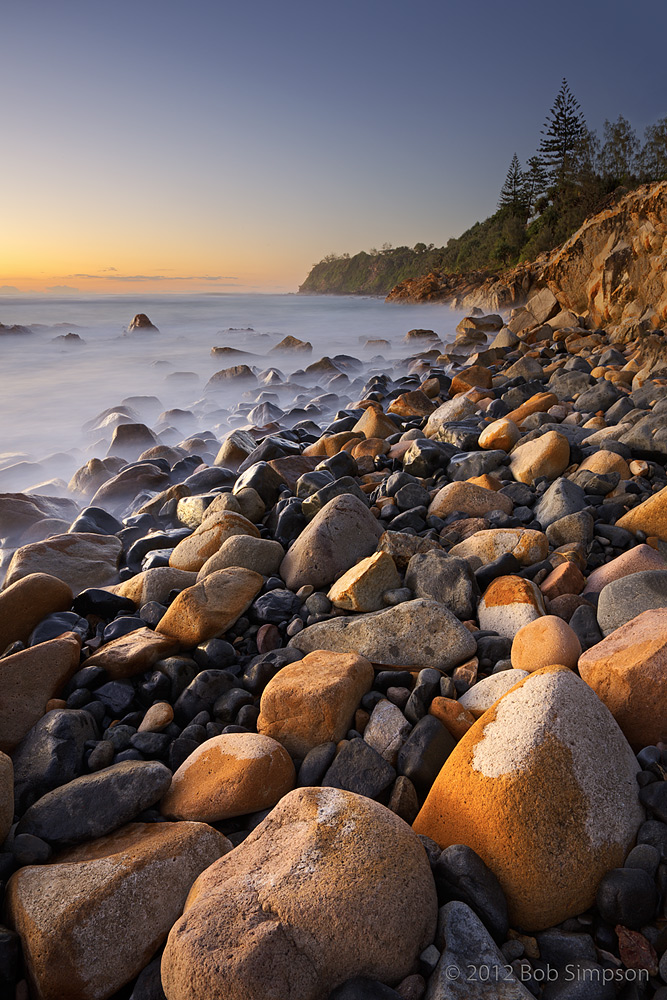 An extra-long exposure has turned the incoming waves into a misty haze, while the golden-hour light has picked out the orange colours of the boulders. 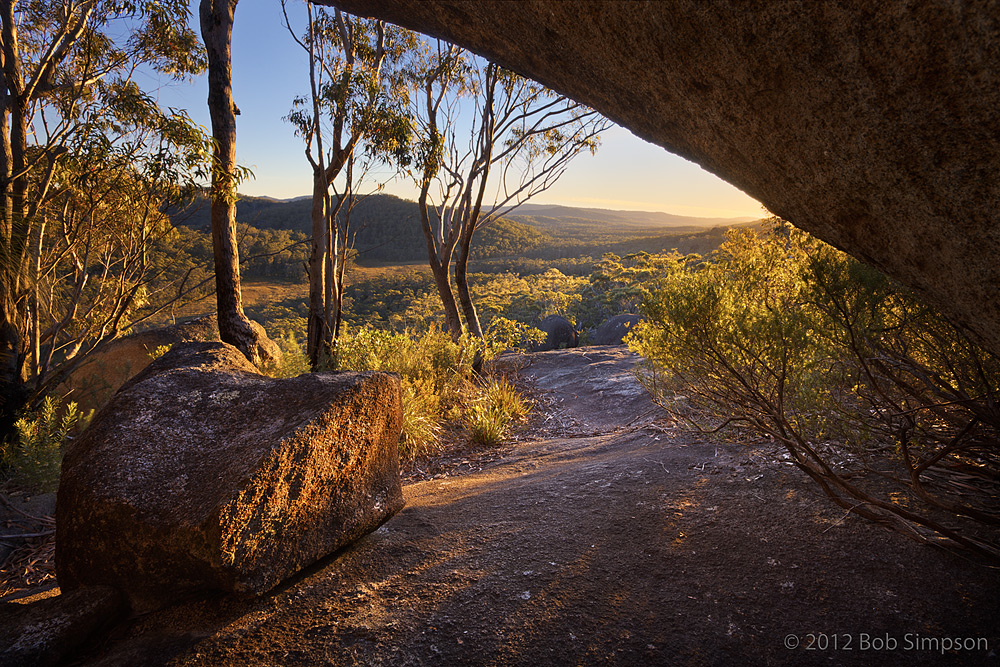 This is one of my very favourite images for the year, but I suspect that has a lot to do with the fact that this spot in Gibraltar Range National Park is such a special place. The golden light on the gum trees at left make it a very Australian sunrise, and the long view down the valley from the cover of the rocks captures the overriding feeling I always get when I visit this place - the feeling that this spot has probably been used as shelter, maybe even revered as a sacred place, for thousands of years....maybe tens of thousands of years. It was also a difficult image to capture and to process because of the huge variation in light levels between the sunlit areas and the dark shade among the rocks. All in all, I'm happy that this image captures what I saw and something of what I felt. 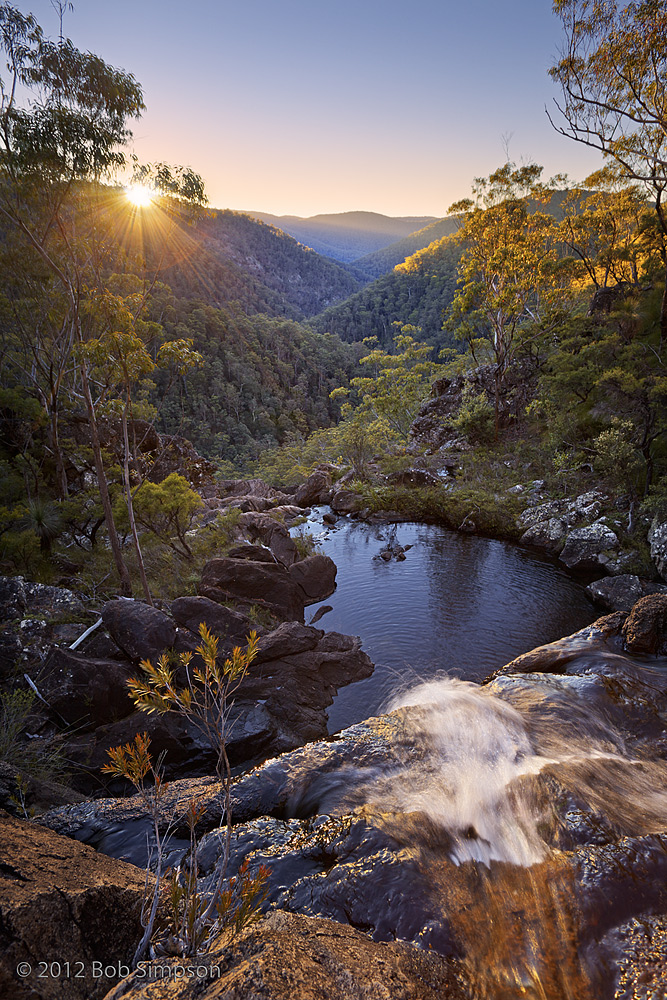 This image is the culmination of several trips to this spot and quite a bit of planning....and I'm still not convinced it's the best I can do. The falls on Duffer Creek are around 55 minutes hike from the camping area at Boundary Creek. I arrived mid-afternoon and spent quite a bit of time climbing up and down to the various waterfalls that plunge off the ridge. This was one of the few spots I could find that gave a clear view down the valley while still allowing for an interesting foreground to give some perspective to the scene. I'm not unhappy with the image - I wouldn't have included it here if I was - but I think there might be something better waiting there for me next time. 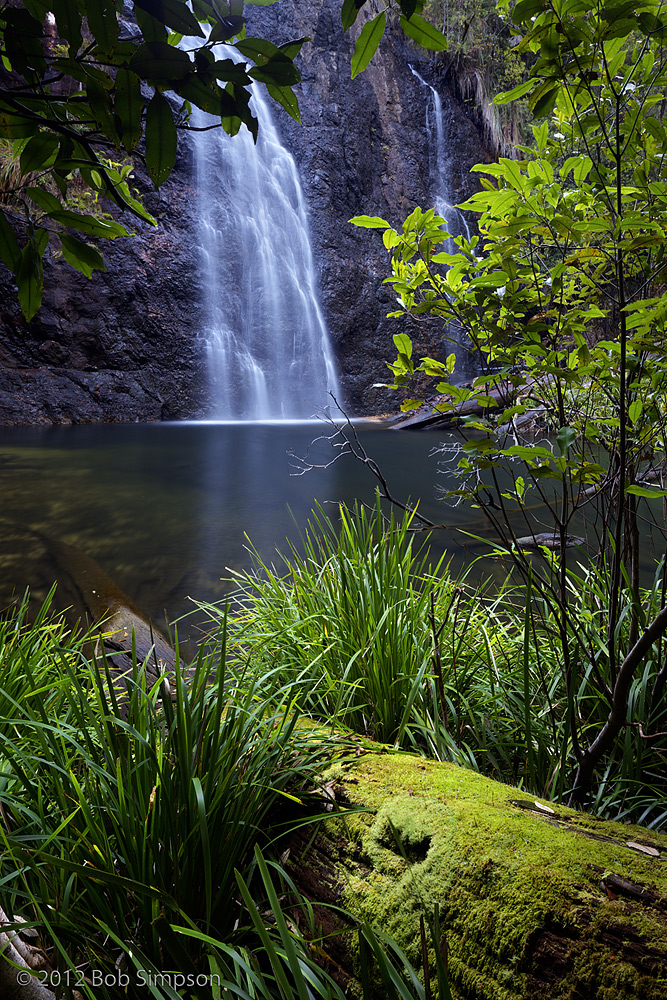 It's a short walk from the camping area down to the base of Boundary Creek Falls. Once down there you are surrounded by steep rocky banks and tall rainforest trees that are kept moist by the spray from the falls.. For this image, I searched around for a spot that gave a clear view to the falls while framing them with some of the green lushness around the plunge pool. The mossy log made a nice focal point that captures the damp feel of the place. 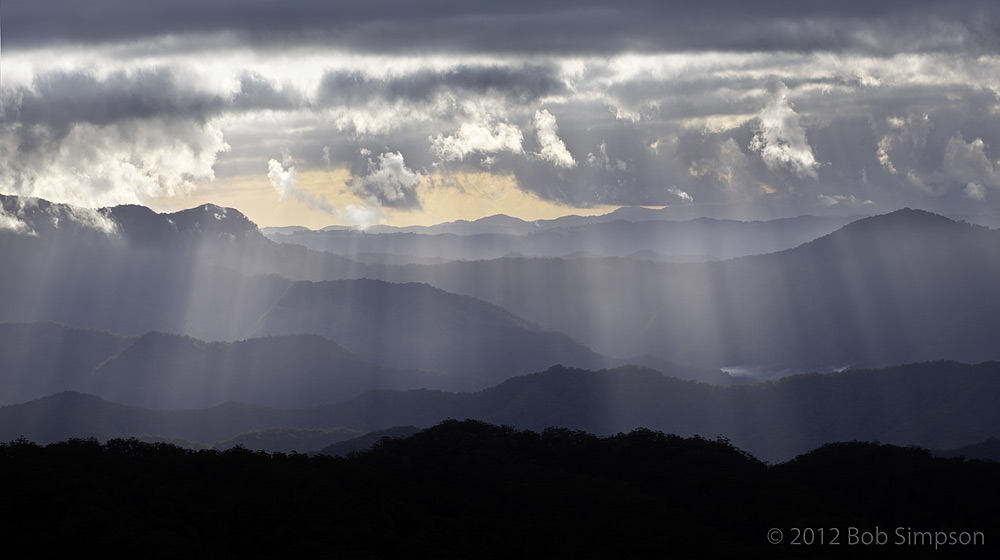 The grand view over the New England wilderness from Wright's Lookout was made even more majestic by these rays of morning sunlight....I had to pinch myself at the time to make sure it was real. It's a scene I won't forget. 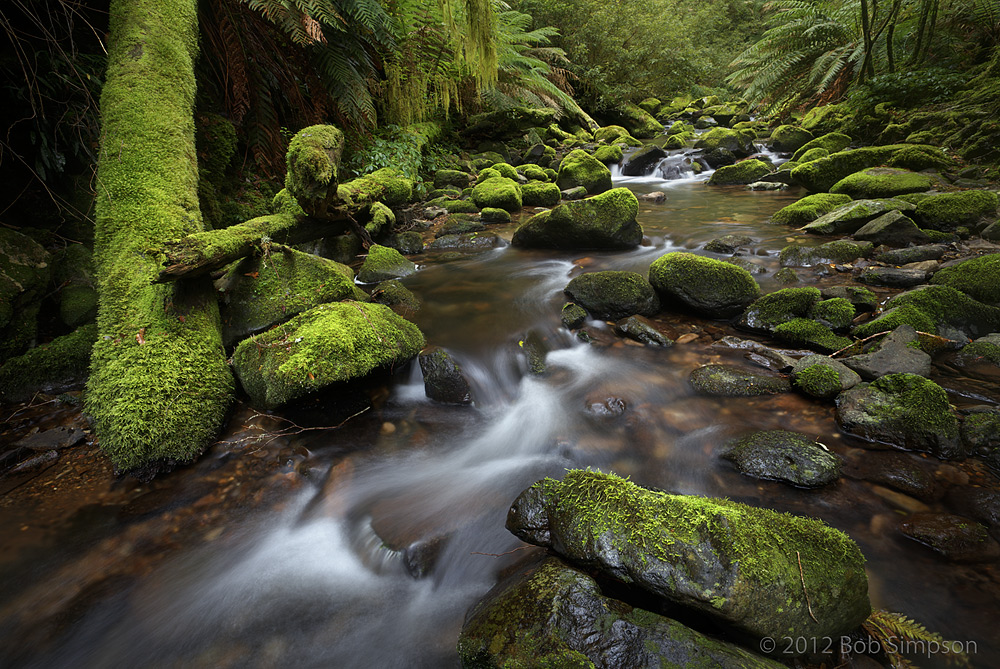 The same morning I was treated to the magnificent view in the previous image, I came across this fairy-tale scene of mossy logs and sparkling mountain water.....incredibly cold sparkling mountain water! There were ice droplets on the fern fronds under the creek bank. So standing in the creek in bare feet looking for a good composition was more uncomfortable than usual...but I'm glad I did it. 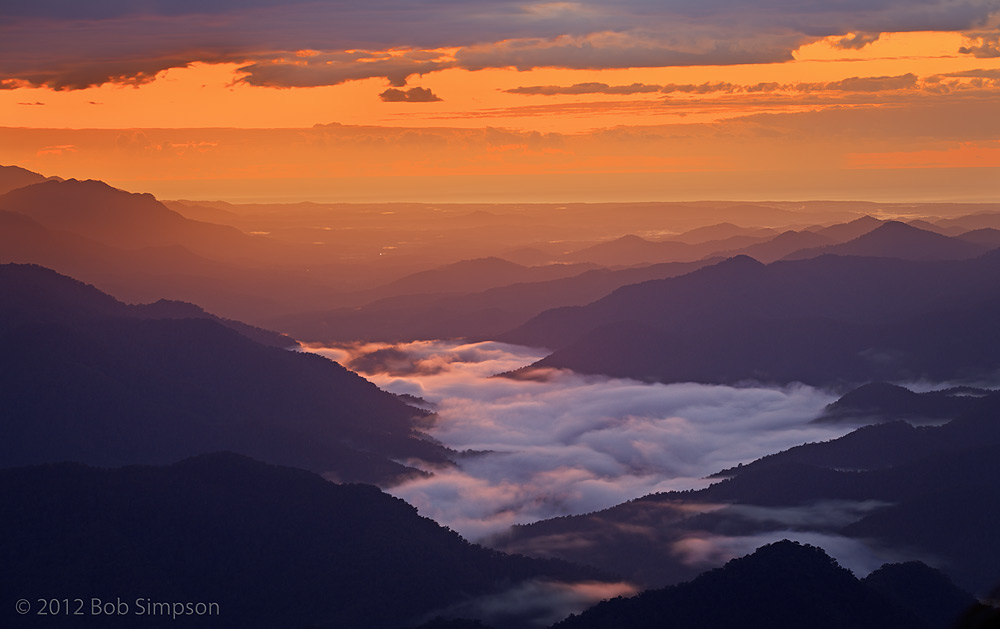 Another grand view over New England National Park. The cold morning air was quite clear so the closest hills in this image, which were a long way from where I stood, weren't at all hazy. I love how the orange light of sunrise picks out and accentuates the folds of mist in the valley. 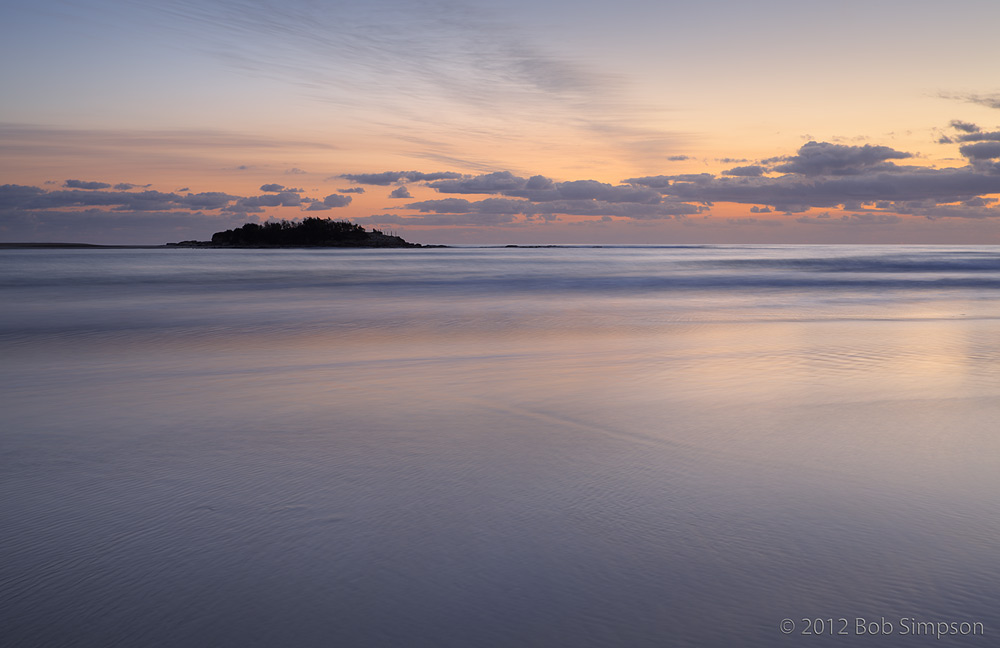 This is the subtlest sunrise image in my collection of favourites - and that's why I like it. The soft orange/violet tones complement the soft look of the water (created by a 5 second exposure) and the wispy bit of cloud that's reaching over Pincushion Island. 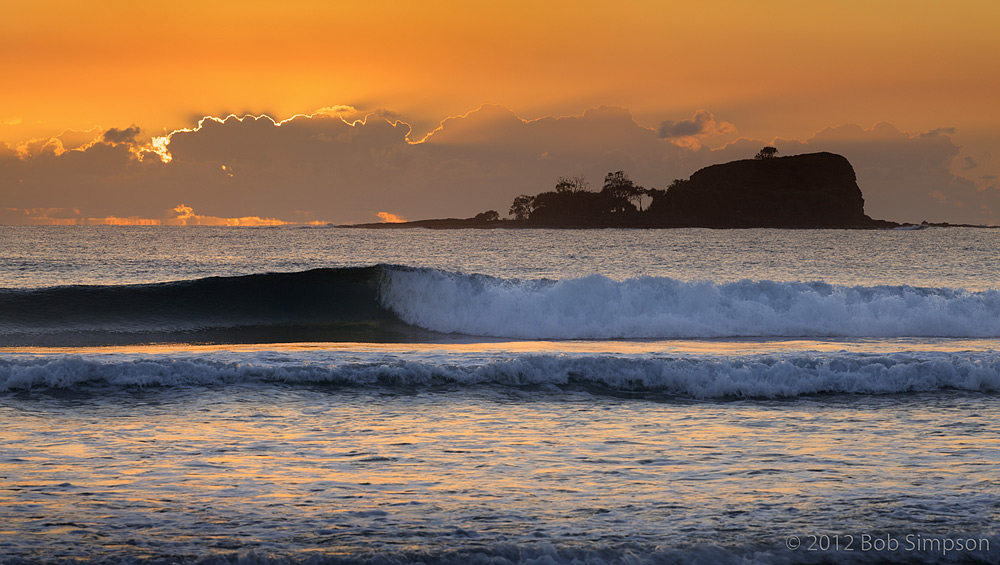 Mudjimba Island (Old Woman Island) has a really interesting shape that looks great in silhouette. With the rising sun about to break out from behind a low cloud bank, I just had to wait for a wave to break to complete the scene. I took several images of the scene so I could pick the one with the best shaped wave. 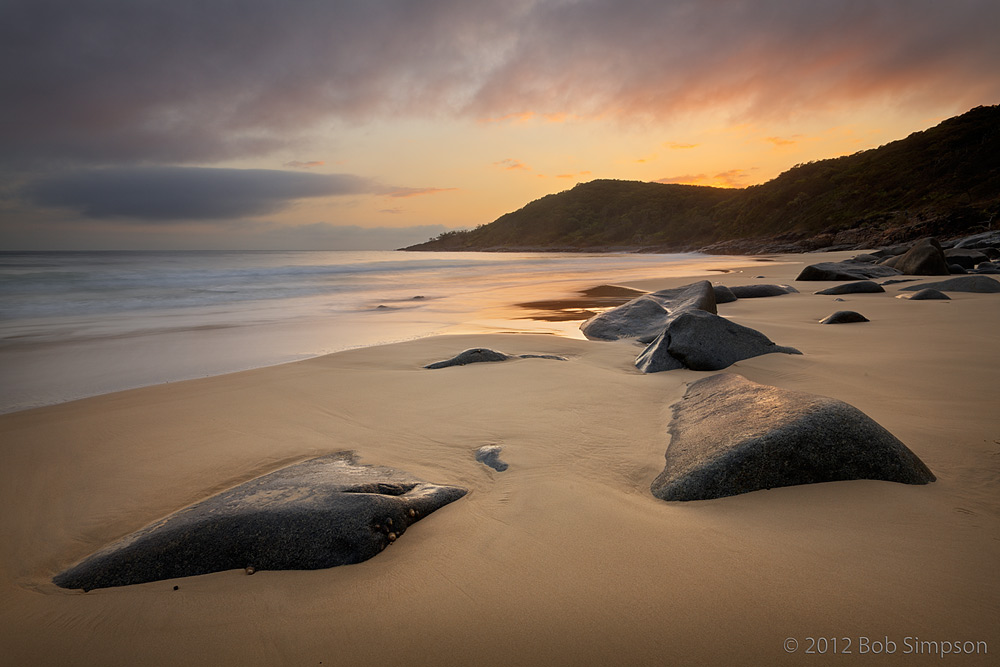 Early morning on the beach at Granite Bay is a very peaceful and lovely time. Everything about this image seems 'smooth' to me - sand, rocks, water, clouds - so it captures the feeling I get when I'm the first person of the day on a pristine, footprint-free beach. 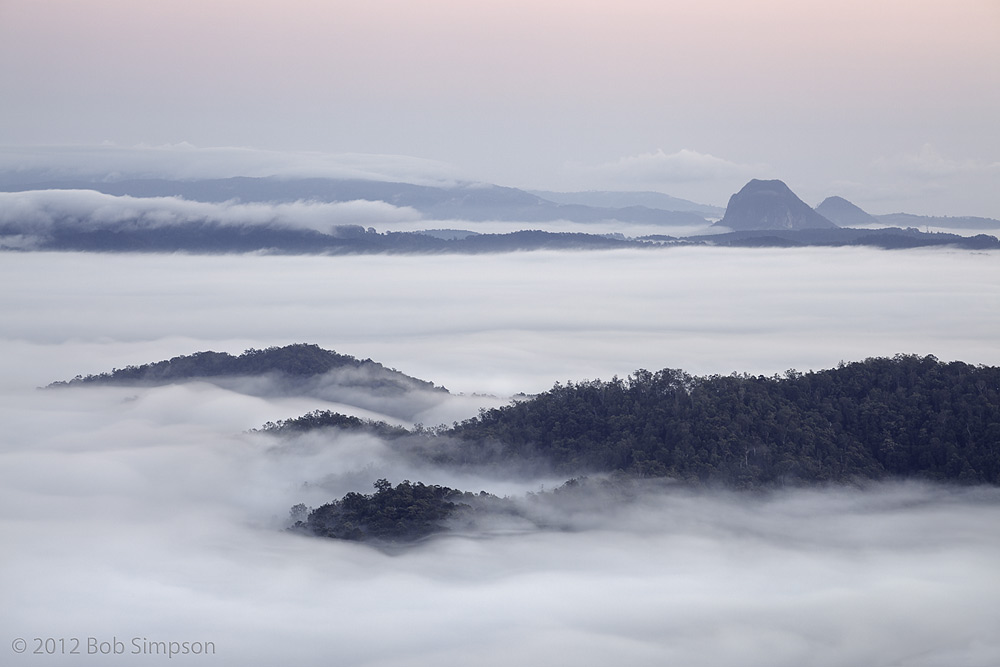 One of the highlights of my year was stepping up to the Thilba Thalba viewpoint before dawn and seeing this expanse of fog stretching into the distance. It was one of those cartoon moments where you rub your eyes to make sure it's not a mirage. This image was one of my most popular for the year on Facebook, and the name I gave it on my web gallery, 'Sleeping Giants', was suggested by one of my Facebook friends...thanks Tony Barnes! 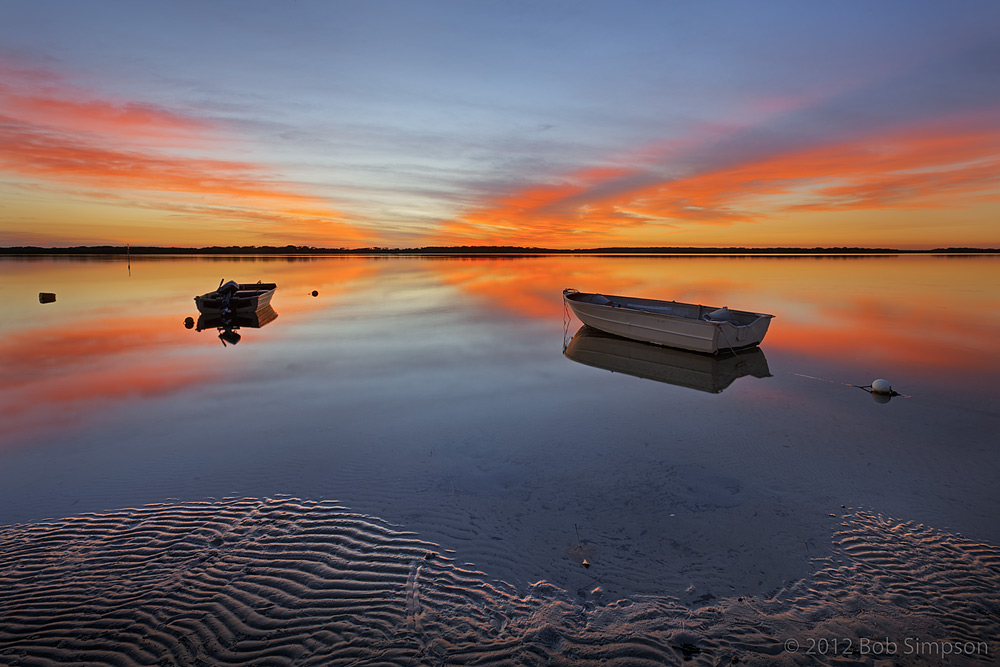 Another beautiful display of natural light, and another case of being in the right place at the right time. I hadn't been to this part of Golden Beach at sunrise before, and after looking on Google Maps I'd decided to head for the mouth of Bell's Creek at the southern end of Golden Beach. But as soon as I drove onto the Esplanade near Military Jetty I could see these great cloud shapes and beautiful reflections starting to form, so it was a mad scramble to park the car and run down to the beach with camera and tripod. The rippled sand was a bonus I couldn't resist, but the image also looks quite good with the sand cropped out to make a long panoramic shape. 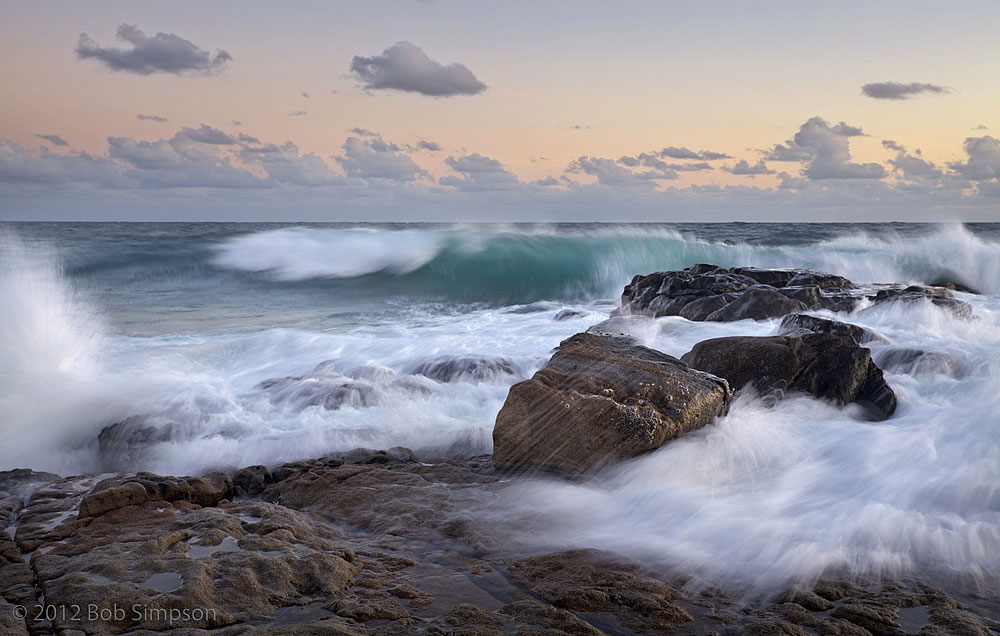 My favourite waves/rocks image for the year was captured only a couple of weeks ago. I spend a lot of time on rocky shorelines trying to time the breaking of waves just right for maximum effect in my images, but this one worked better than any others I've captured recently. And the aqua/green of the breaking wave complements the peach colour of the sky nicely to my eye as well. My poor old camera needed a good wipe down afterwards with all the salt spray flying around but it still seems to be chugging along alright....in fact it's ready for an even bigger year in 2013.