A River Runs Through It

If I had to paint a typical picture of the Murray-Darling River system, it would include long, slow-flowing waterholes fringed by river redgums, with a few white cockatoos flying by and some kangaroos grazing on the floodplain. This is the Murray-Darling I grew up with, and the one that a lot of Australians identify with. But of course, it’s only part of the picture.

The headwaters of tributaries flowing west from the Great Divide are more likely to be rocky, fast-flowing streams with deep gorges and rocky cascades. Perhaps not the typical Murray-Darling of my imagination, but a fundamental and beautiful part of the Basin as a whole.

Kwiambal National Park in northern NSW is a great example of this other Murray-Darling, and an excellent place to spend a few days walking the rocky trails and taking in the rugged scenery . The central features of the park are the Severn and Macintyre Rivers which wind between rugged granite hills before joining to deliver their water to lowland areas downstream. River redgums, cockatoos and kangaroos are all part of the deal at Kwiambal, but the Park's cypress pine and ironbark woodlands and spring wildflower displays make this a unique and exhilarating place to explore on foot. 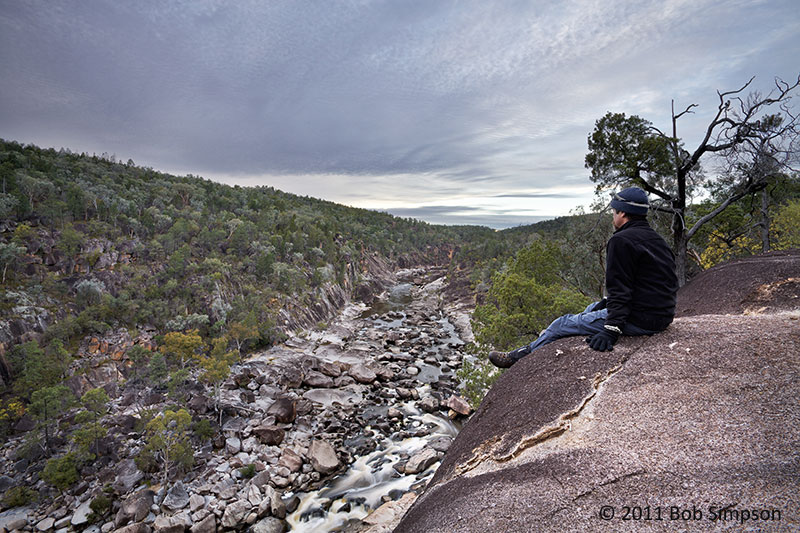 History in the making
Kwiambal is the traditional home of the Kwiambal People who lived there year round on the resources provided by the woodlands and rivers. When explorer and botanist Allan Cunningham rode through the area in 1827, there were already Europeans settled on good grazing and farming land. The cypress pine woodlands attracted timber getters in the late 1800s, and the Ashford area became the State's primary tobacco producing area in the early 1900s.

Kwiambal was privately owned up until its proclamation as a National Park in 2000.  There is evidence of its recent European history in the derelict farm buildings to be seen on the drive in, and more unfortunately in the healthy population of feral goats that thrives in the park. National Parks and Wildlife Service staff are working hard to reduce the numbers of goats and other introduced animals and plants and return the park to a more natural condition.

The grassy campground at Lemon Tree Flat makes a very comfortable base from which to explore the rocky trails in the park. It's a picturesque spot with tall river redgums lining the rocky riverbanks, grey kangaroos grazing on the grassy flats, and some very healthy lemon trees among the campsites. White cockatoos create a ruckus each evening when they come to roost in the redgums, and possums and gliders can be spotted by torchlight after dark. I'm told that the campground can get quite busy in summer, but I've visited in winter and spring and had the place pretty much to myself. 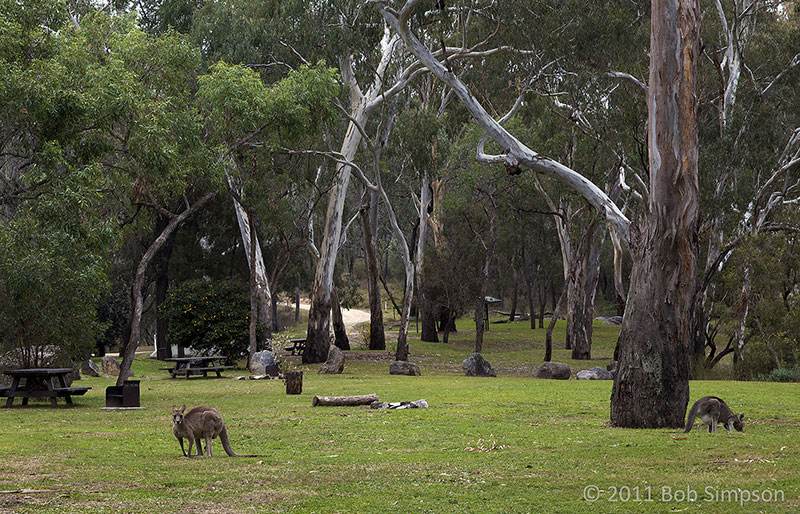 One of the immediate things about the landscape that will strike first-time visitors is the soft grey and olive-green hues of the woodlands. The National Park protects important and beautiful cypress pine, silver-leaved ironbark and box woodlands that are in marked contrast to the lowland vegetation of the more familiar Murray-Darling Basin. Sheltered parts of the park support around 15% of the dry rainforest remaining in NSW, a vegetation type that has been completely lost from many parts of the State through land clearing. Wattles begin to bloom in winter, and wildflower displays peak in spring. 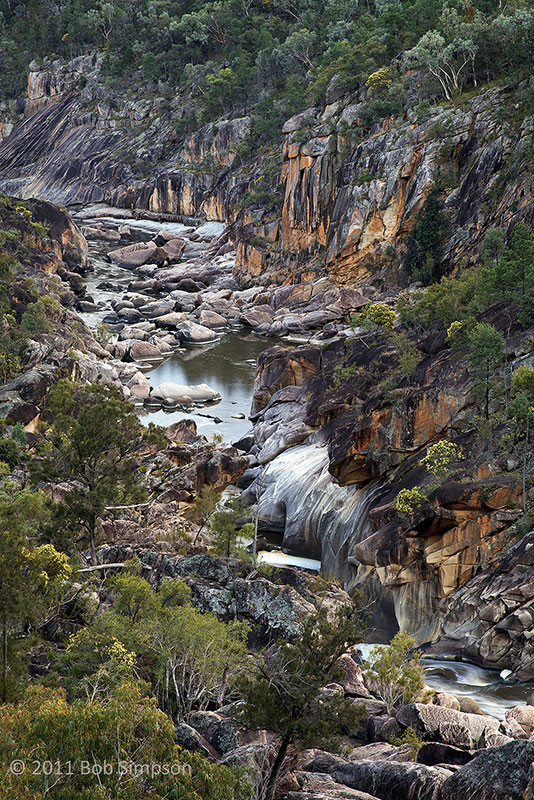 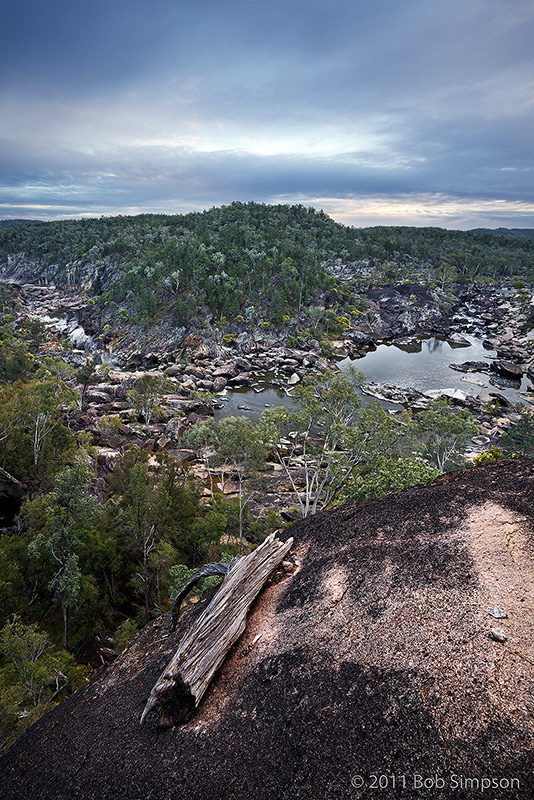 In the loop
The Severn River runs right along the front of the campground and is an excellent place to do some low-energy exploring. Just walk down to the river near the wet weather shelter and it’s easy to rockhop upstream for several kilometres past a series of pools and small cascades. Eventually you will come to the overflow camping area at Kookibitta. When I last visited, the rangers had just marked out a route for a new overland track between the two camping areas so the walk can be done as a loop.

A lovely hiking trail leads from Lemon Tree Flat to the junction of the Severn and Macintyre Rivers around 4 kilometres away. The main trail is an old 4WD track (closed to vehicles) and ends at a picnic table under shady trees overlooking the junction. An alternative trail follows more closely along the course of the Severn River and joins with the main trail at several points, so the walk can be done as a loop. 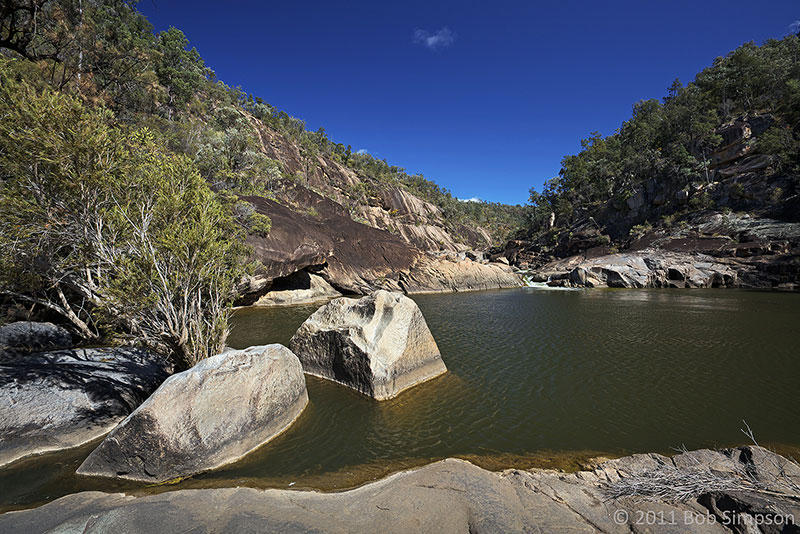 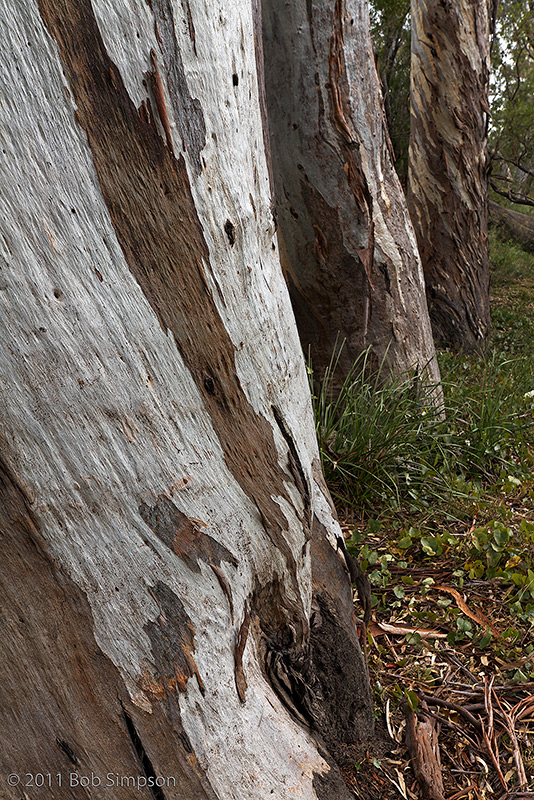 River Redgums at the Junction

There are some great views down to the Severn River along the riverside trail, the most spectacular being a rugged stretch of massive boulders known as the Dungeon. This is an amazing spot at the driest of times, but must be an awesome sight when the river is in flood. There are similar views down to the Severn River Falls further along the track, but the best vantage points are reached by scrambling up onto unfenced rocky outcrops so you need to take it carefully.

Rock-hop around the clock
A ten minute drive from Lemon Tree Flat brings you to the Macintyre Falls picnic area where several walking trails head off up and down the river. The main falls aren’t particularly high or wide under normal flows, but together with the massive rock faces and boulders that frame the river, and the huge rock pool that the falls plunge into, the scenery is breathtaking. There are several easily-accessed lookouts within five minutes walk of the picnic area, and steep but well-made tracks leading to the rock pool at the base of the falls and areas just downstream. 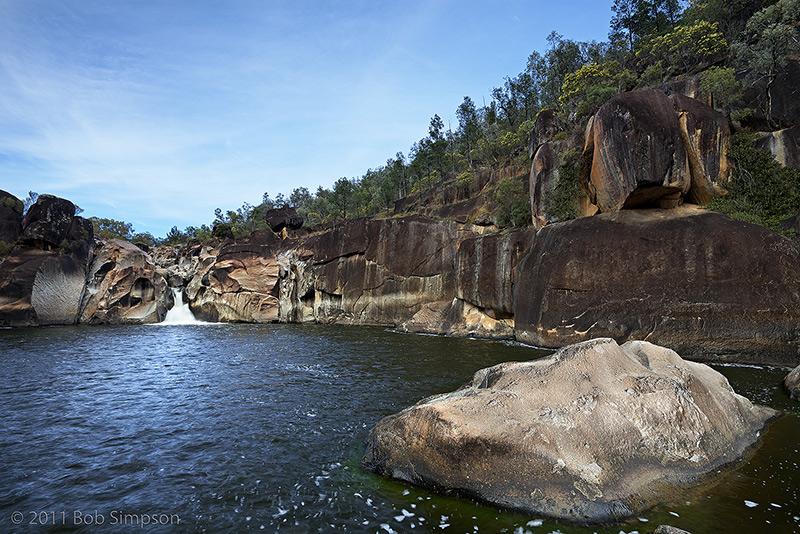 The plunge pool at Macintyre Falls 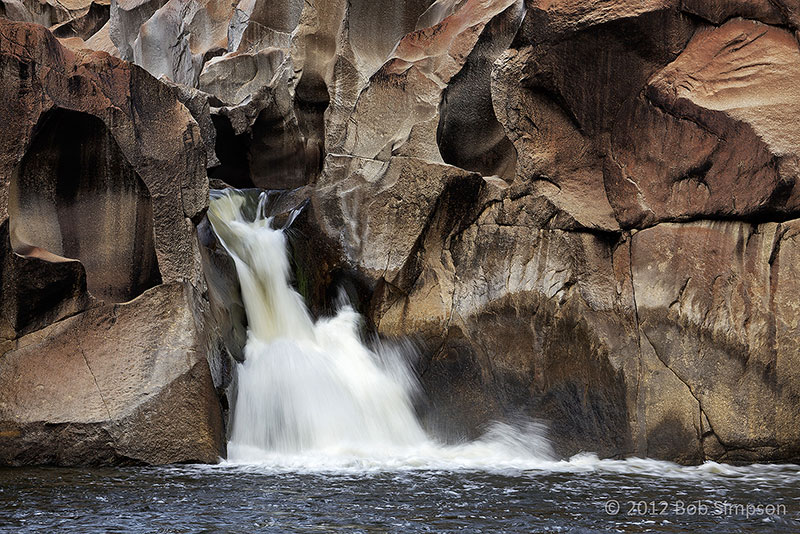 A half hour walk downstream from Macintyre Falls brings you to Slippery Rock and another beautiful set of cascades and pools. The rocky track meanders through open woodland high above the river before descending onto the broad, flat, rocky banks via a series of steps. Once down at river level you can explore up and downstream by scrambling over the rocks, but the shallow crossing point near the bottom of the steps requires extra care. Slippery Rock is a name well-earned! This is an excellent spot to just sit back and take in the rugged scenery surrounding you, with the sounds of the river gurgling in the background. 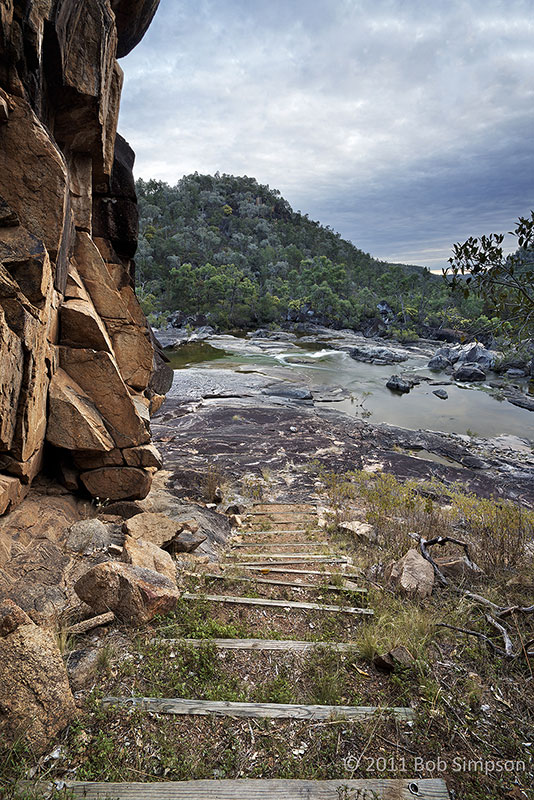 Steps down to Slippery Rock 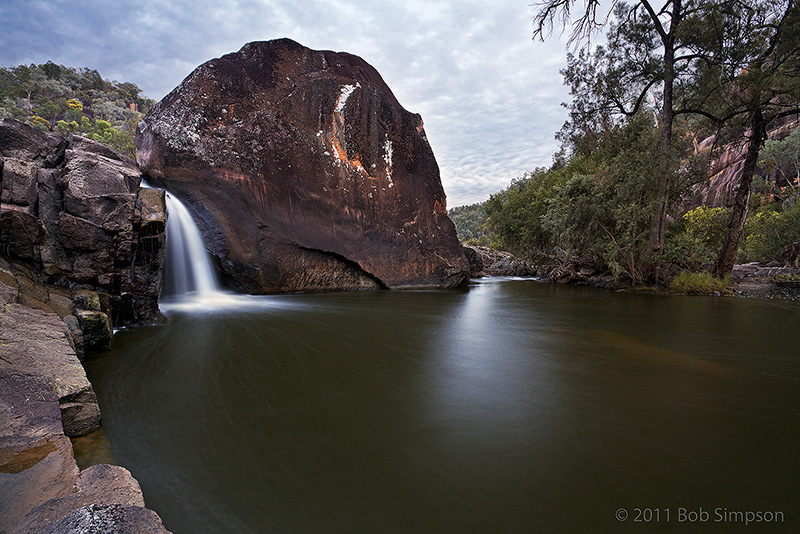 The Macintyre River near Slippery Rock 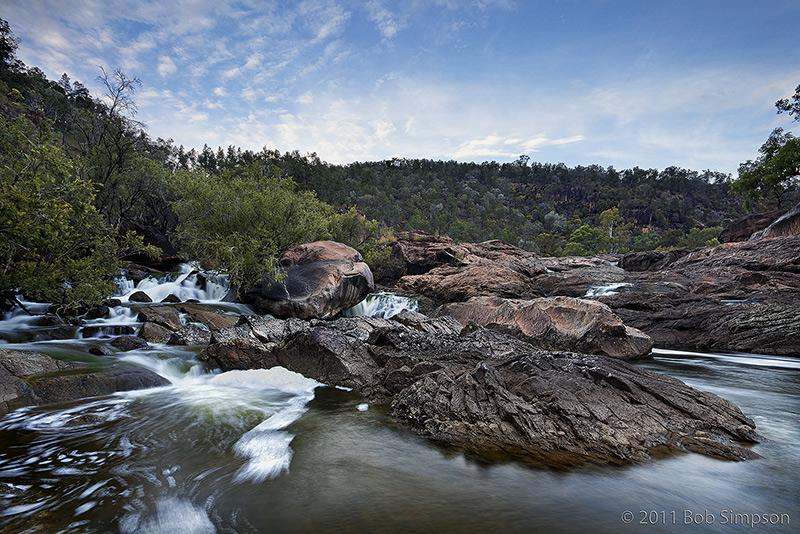 A cascade on the Macintyre River

As mentioned, there are plenty of opportunities to rock-hop along the Severn and Macintyre Rivers. One of the best spots is alongside Lemon Tree Flat, but you'll find plenty of other places just off the main walking tracks. There are some wonderful examples of weathering and erosion to be discovered along the banks, with intricate scalloped patterns, potholes and balancing rocks to get you thinking about the immense time-scales involved in shaping the land. Photographers with a bent for the abstract will find some great subjects among these ancient patterns and textures.

Kwiambal has opened my eyes to the diversity of our greatest river system, the Murray-Darling. The Park is a little out of the way, but its landscapes are unique, rugged and truly beautiful. If you can find the time, a visit to Kwiambal is incredibly rewarding and will stay in your memory for a long time to come.

Need to Know
Getting there
Kwiambal National Park is located around 90km north of Inverell. It's a 6+ hour drive from Brisbane - after passing through Warwick and Stanthorpe, head west along the Bruxner Highway for an hour, then south to the little village of Ashford, and on up into the hills to Kwiambal. The last 19km of road is unsealed but fine for two-wheel drive vehicles except after heavy rain.

Camping
Lemon Tree Flat is a large grassed area beside the Severn River. The western end of the camping area is suitable for campervans and vehicle-based camping, while camp-sites at the eastern end are separated from the parking bays by bollards – in most cases you can camp well within 20 metres of your car. Facilities include picnic tables, non-flush toilets, wood barbecues, fireplaces and a wet weather shelter. Limited tap water is provided but should be boiled before drinking. Bring your own clean, milled firewood. Camping fees can be paid at the self-registration booth in the camping area. For more information, visit www.environment.nsw.gov.au/nationalparks/ or call the National Parks and Wildlife Service at Tenterfield on (02) 6736 4298.

When to go
Winters are typically dry and cold - night temperatures often drop below zero. Summer days are warm to hot and the nights cool. Most of the rain falls in the summer months. Autumn, winter and early spring offer the best walking conditions, and spring is the best time to see the displays of wildflowers.

Maps
Rocky Dam 9039-N 1:50 000 topographic map. The free brochure at the self-registration booth has adequate maps of the walks described in this article. 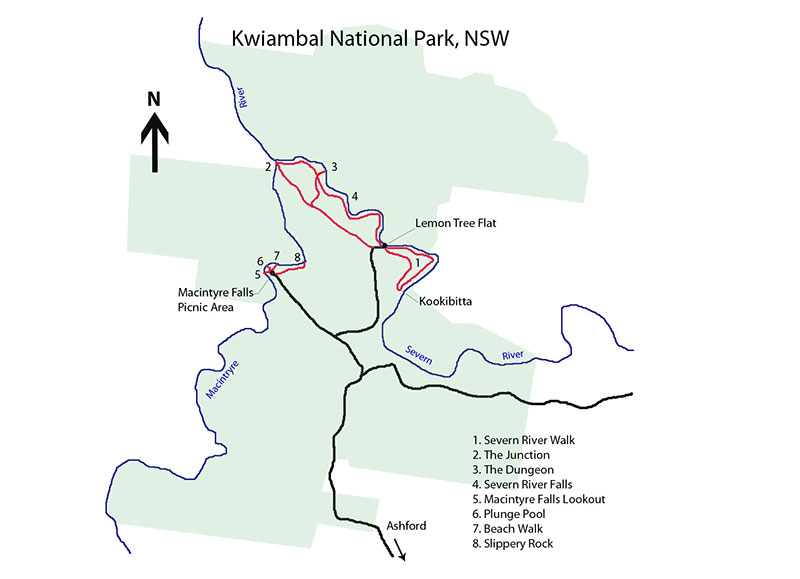 Through the past, lightly - images of 2014
Musings on photography
I snapped the image above from a rock outcrop in Mount Kaputar National Park in July 2014. I remember how good the first sunlight of the day felt on my face after an hour or more of scrambling about t...
7388 Hits
2 comments
Read More

Exposure blending
Tips & techniques
This is a technique I use on a lot of my images to try and show the full dynamic range of a scene as is visible to the human eye. Digital camera sensors are very good at what they do but they are no m...
7012 Hits
0 comments
Read More