I didn't make it down to the New England tablelands for the blast of snowy weather in mid-July, but I did get to spend a few days at New England National Park later in the month...and it was still icy cold. Getting out of bed for the sunrise photo session meant stepping out into temps well below freezing - -6 C on my first morning and not much warmer for the rest of my stay.  At least the days warmed up to a sunny 8 - 10 C.

I stayed in my usual spot at Thungutti campground, just inside the National Park. The amenities are basic but several hiking trails head off from here, and it's only a 5 minute drive to more walking and sightseeing options up at Point Lookout. The forecast was for clear skies and cold nights and that is pretty much how it worked out - barely a cloud in the sky during the day and frozen water bottles in the morning.

New England NP offers a great variety of photographic options - there are the grand views with lines of mountains receding into the distance (and if you're lucky, stunning sunrises over mist-filled valleys), the ancient beech forests and snow-gum woodlands often infused with a soft mist, and the shaded, green lushness of forest streams like Five Day Creek. I got to sample all of these options during my stay, and while there was no mist to add to that evocative mountain feel, I once again came away completely exhilarated by the beauty of the place.

A 4:30am start saw me scaling the final rocky steps up onto Wright's Lookout a good hour before sunrise. The sky was cloudless and there was already a faint glow on the horizon to the east, but a matter of more immediate consternation was the icy wind whistling across the plateau. With the air temperature sitting on -6C, the breeze made things rather uncomfortable to someone who has spent the last 25 years in the sub-tropics! After putting on all my warm gear, topped off with a long, hooded storm-jacket, I started searching around for compositions through watering eyes.

After experiencing such beautiful sunrises at this spot in the past with clouds and mist aglow with dawn colours, the clear conditions on this morning were a little disappointing at first.  I captured various scenes of the grand view using the rocks and shrubs along the edge of the plateau as foreground interest - the first image below was one of my better efforts in the pre-dawn chill. But it wasn't until the sun came up that I was treated to some really spectacular light as the landscape was bathed in a warm glow. The warm colours in the second image below belie how cold it still was but it is my favourite image of the session.

The rising sun did little to warm the temperature and I have to admit the cold eventually got the better of me. With fingers, toes and nose all in various degrees of pain, I retreated from the windy plateau a little sooner than I might otherwise have done and headed down into the stillness of the surrounding forest to look for other options. 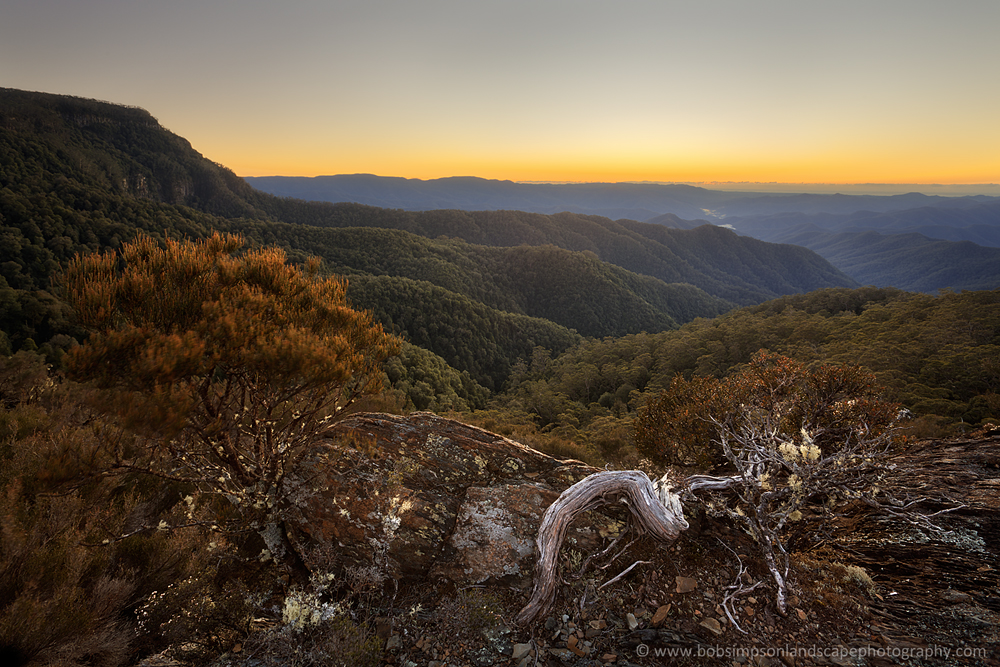 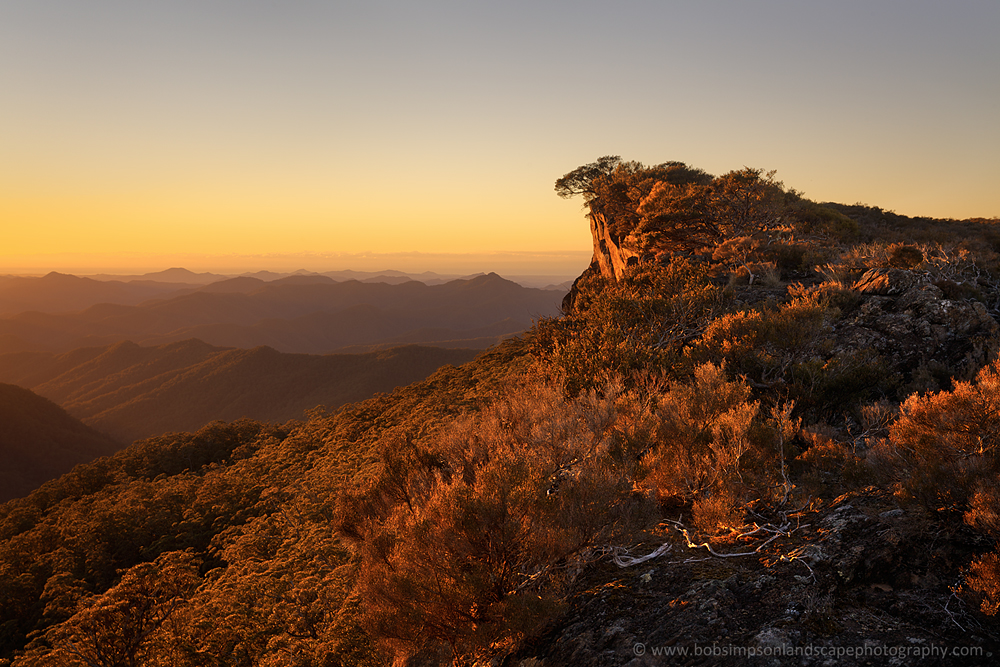 With my extremities still recovering from the session up at Wright's Lookout, I decided to head down the steep, forested Cascades trail to Five Day Creek. Along the way, I detoured into the forest to photograph the fallen logs in the first image below. I really wanted to highlight the 'crossroads' in the forest created by the two trunks but no amount of clambering around on the logs gave me the composition I was after, and I instead moved in close to capture the more detailed scene shown below.

Back on the trail, the ringing tones of lyrebird calls and the sound of running water in deep gullies far below provided the soundtrack for my descent through the forest. After 20 minutes walking, I clambered down a muddy bank and onto the rocky creek bed in the second image. There was an overwhelming feeling of being completely enveloped by the forest - damp, dark and green, with only hints of clear sky twinkling through the leafy canopy - and that is what I tried to capture in the photograph. It is a pretty stretch of creek but so overgrown that it was difficult to move about and even more difficult to find clean compositions, so I climbed back up to the trail and continued down to some larger cascades I'd discovered on a previous trip. 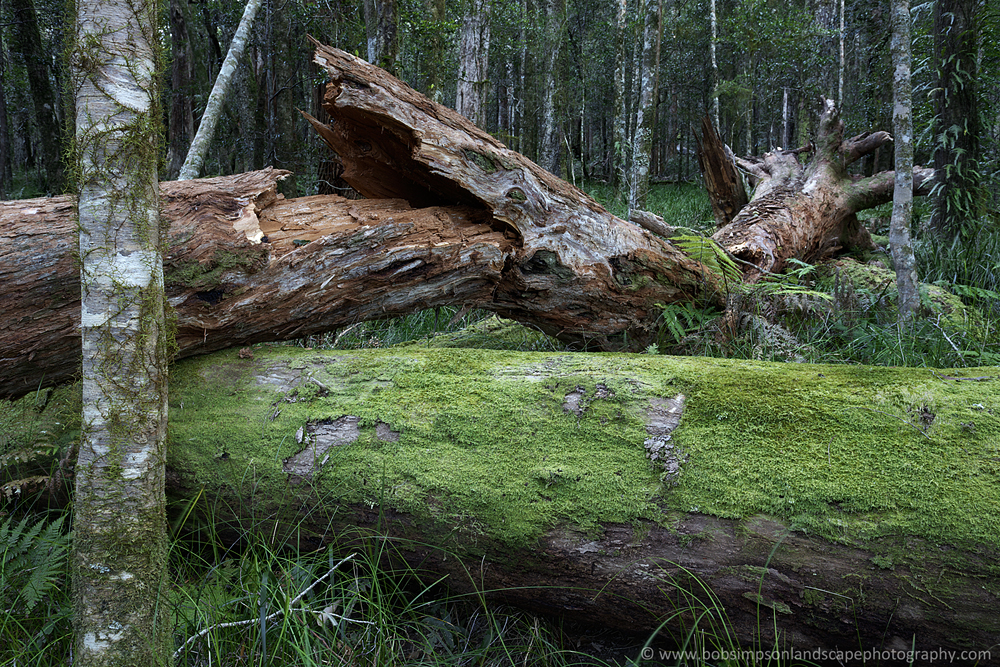 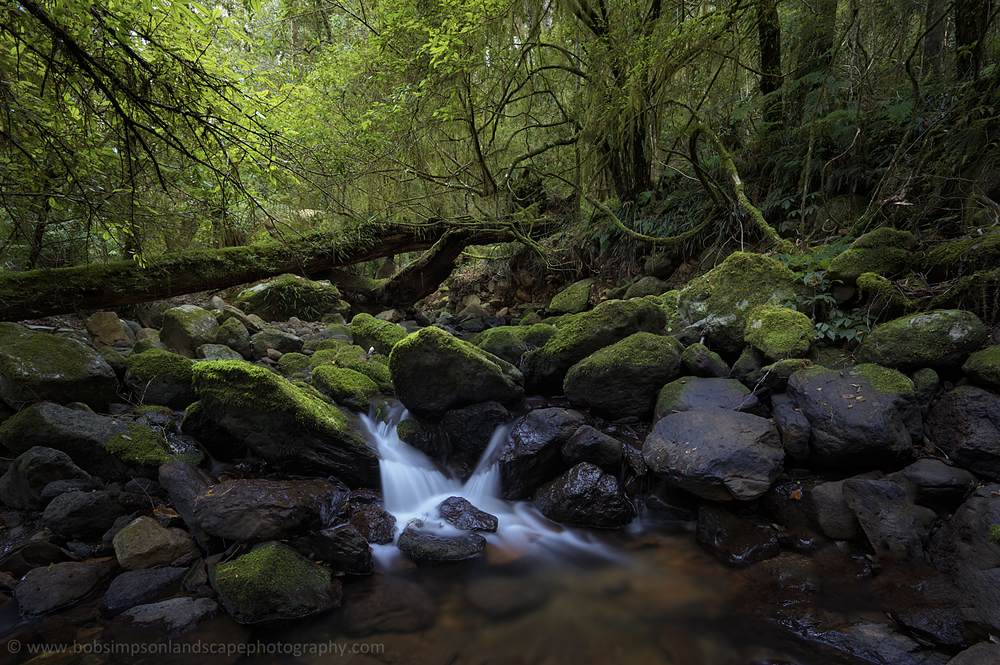 Cascade Falls is one of highlights of the Cascades trail - fringed by tree ferns, mossy rocks and carpets of rainforest spinach, the falls have been photographed by many others, but my own efforts here on a previous trip didn't really stack up and I was keen to do better. I ditched my pack and spent over an hour carefully rockhopping around the falls trying to incorporate the elements that caught my eye into a cohesive image. The crunch of ice underfoot around the edges of the pool were a constant reminder that it was still pretty chilly! The two images below were my best from the session 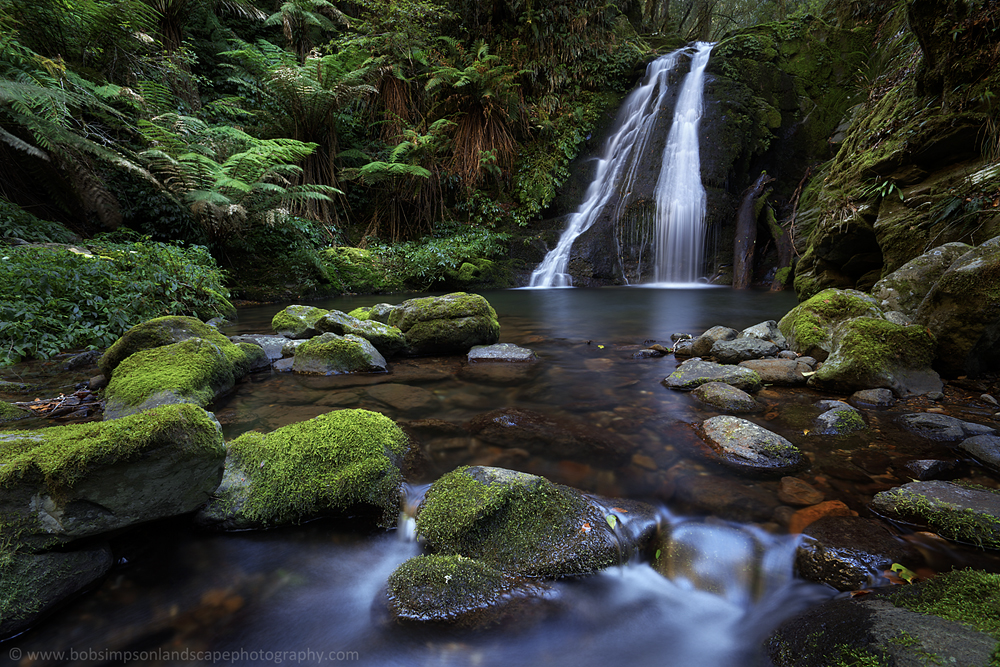 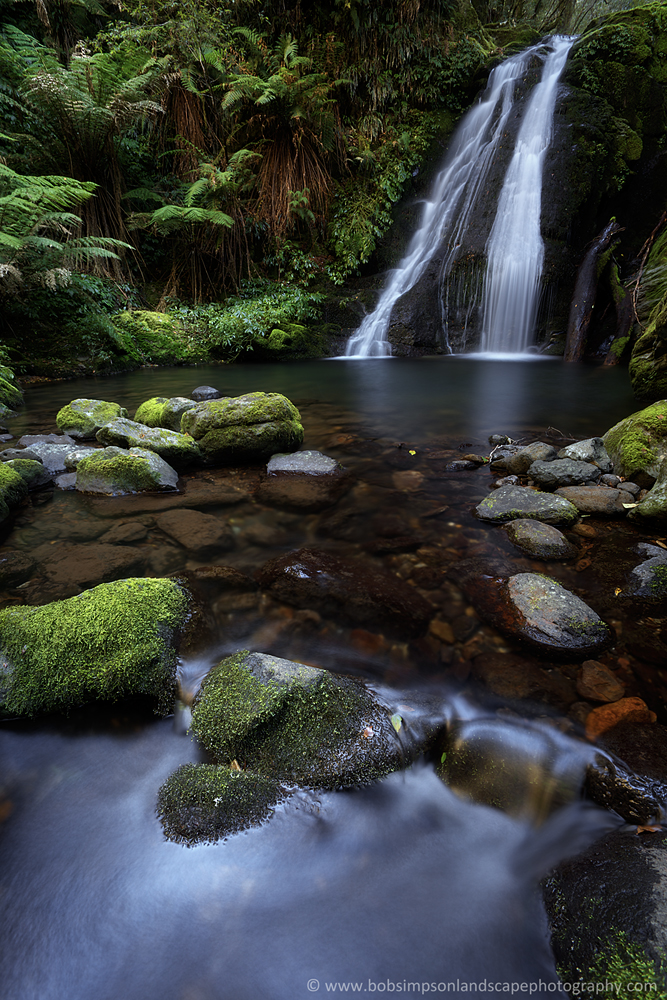 Later that day I took the short walk from Thungutti campground to Tea Tree falls. There's no defined track down to the base of the falls but with care it's reasonably easy to find your way down through tangled vegetation. It's another one of those spots where there is little room to move, mainly because of the logs and flood debris that have collected there, so it pays to take some time with compositions to focus on the subject and exclude the clutter. As with Five Day Creek, it's quite dark down there even in the middle of the day, so be prepared to use slow shutter speeds and/or bump up the ISO. 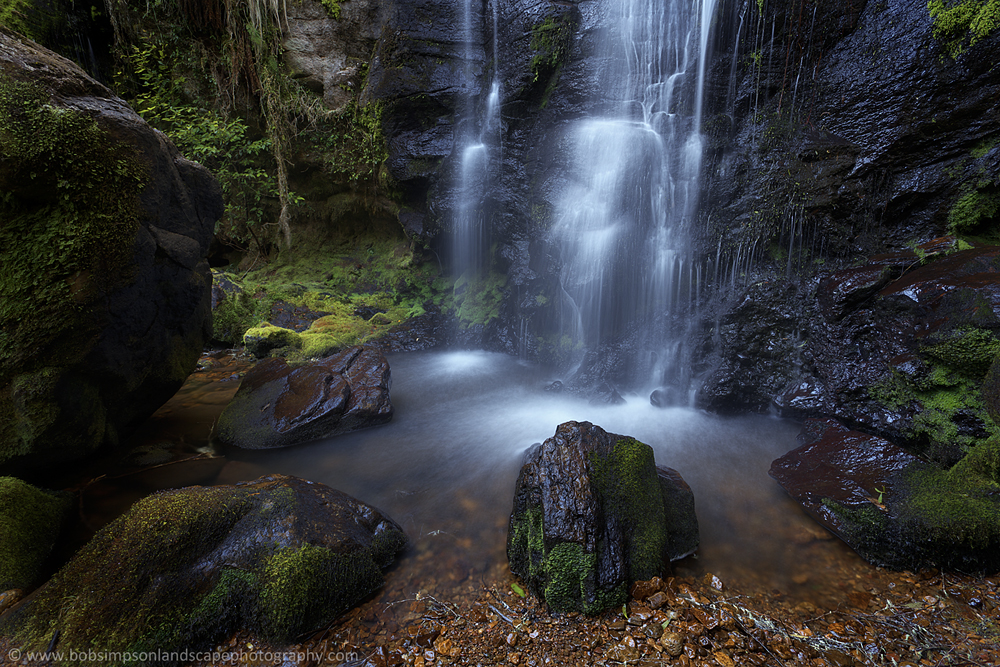 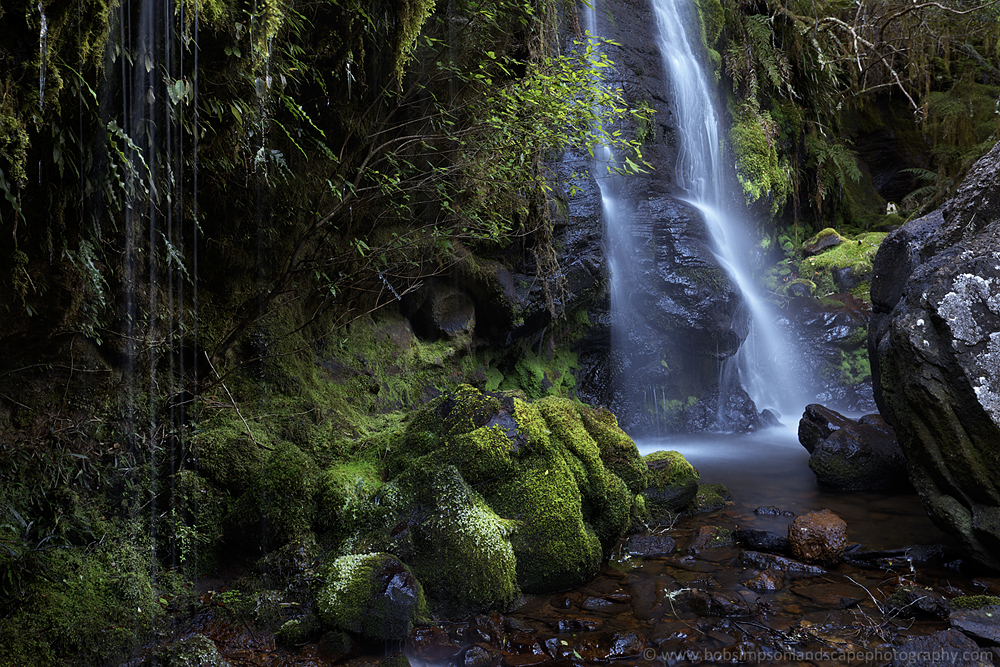 Another early start and I was on the Eagles Nest trail as the glow of sunrise began to spread over the landscape. This steep trail winds around the face of the escarpment just below Point Lookout - the views over lines of mountain ranges are stunning but there aren't many spots to photograph the scene without tree trunks and overhanging branches intruding into the frame. The panoramic image below (2-image stitch) was taken at the Eagles Nest lookout. 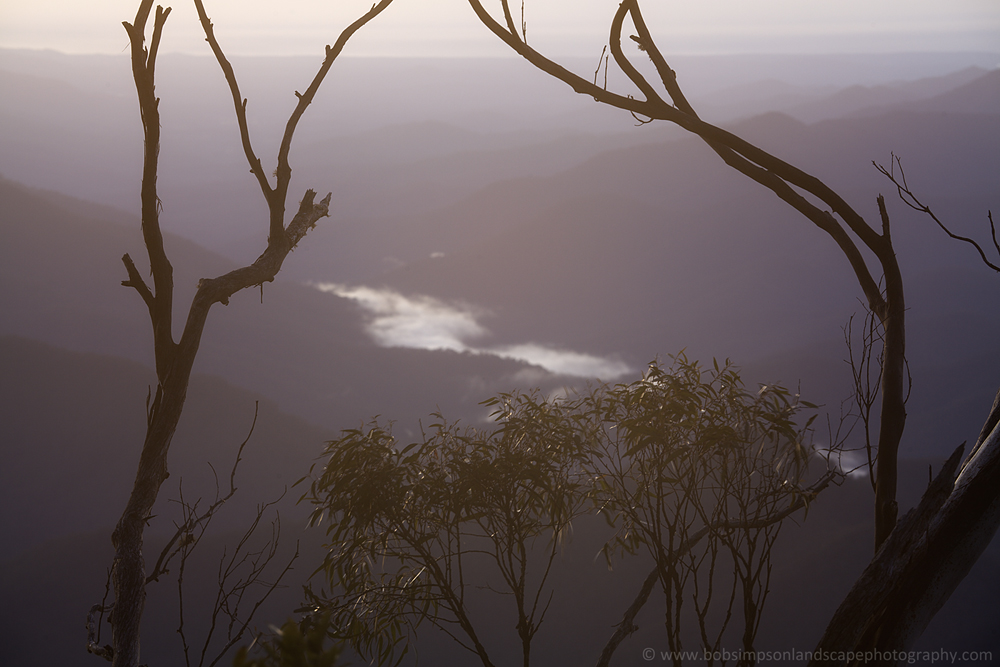 Not far beyond Eagles Nest lookout the walking track cuts in close to the base of a sheer rock face known as Weeping Rock. Water from a natural spring continually drips down the cliff allowing mosses and other low plants to thrive there...or at least that is the usual scenario. In freezing winter temperatures, the dripping water turns to ice and long icicles form under every overhang, creating the fairy-tale-like scene I was lucky enough to encounter. It's difficult to photograph the whole scene because all of the interest is pretty much directly above your head, so I swapped my wide angle lens for a telephoto zoom to capture more intimate views of the icicles.

It was actually a little treacherous standing at the base of Weeping Rock as icicles occasionally broke away from the cliff and created a mini-avalanche of ice shards down onto the track. But with a long lens there was plenty of opportunity to capture parts of the scene without having to stand in the danger zone. I guess I spent more than an hour here before continuing on around the Eagles Nest trail - my final image of the morning was of the mossy rock face (4th image below) just before the trail climbs back up to Point Lookout. 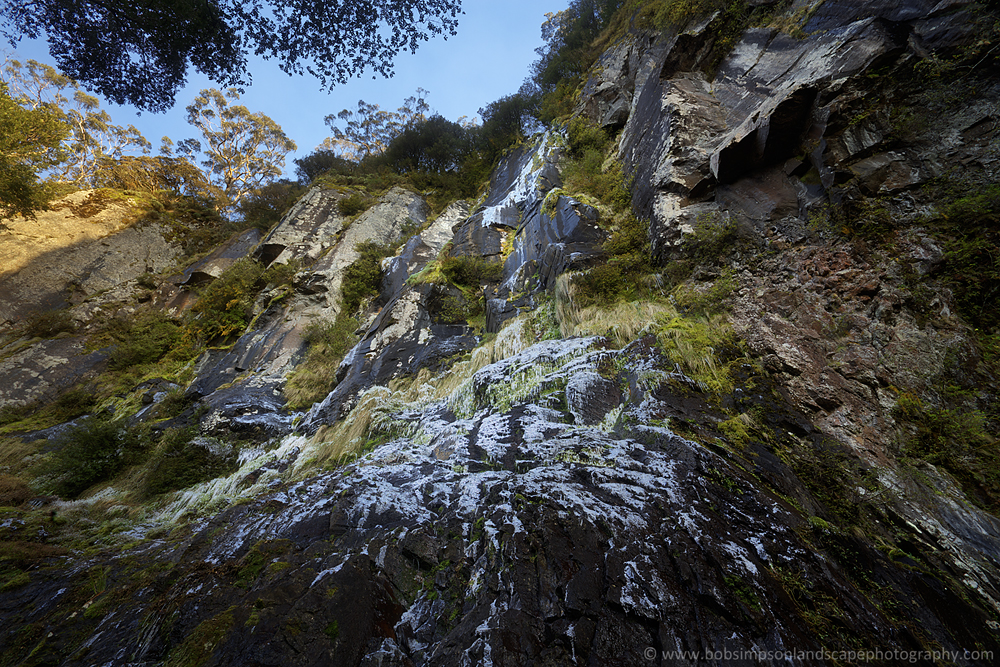 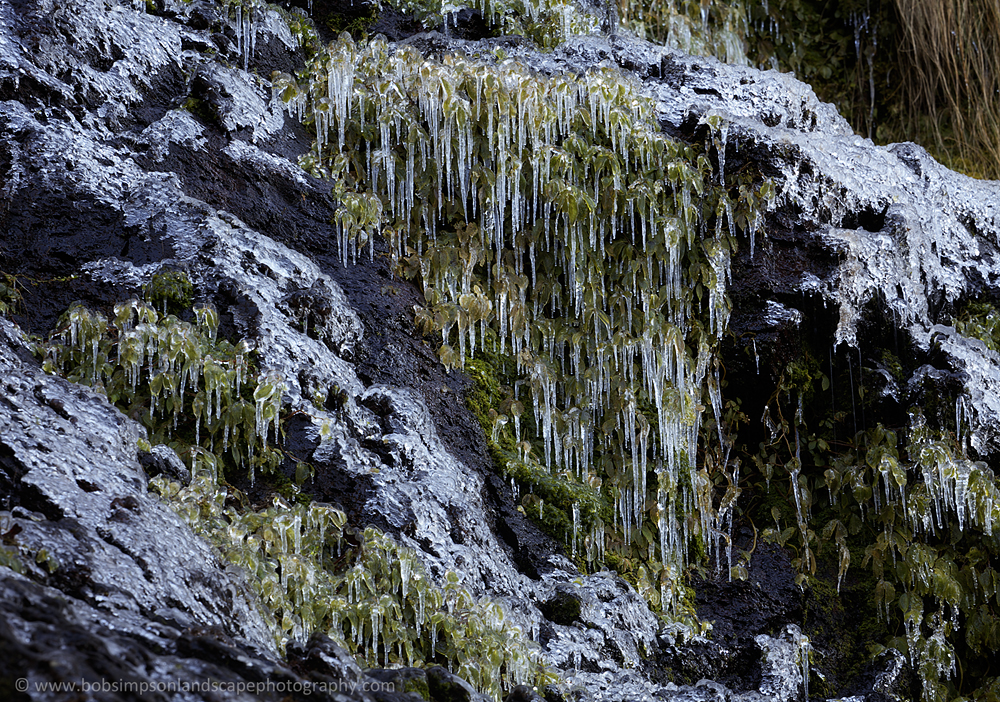 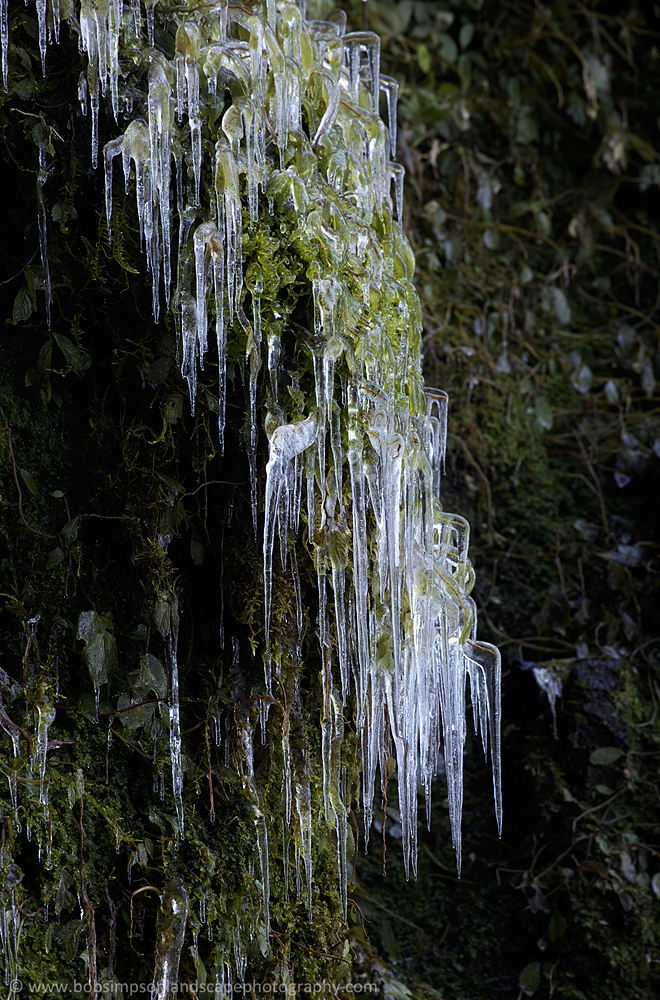 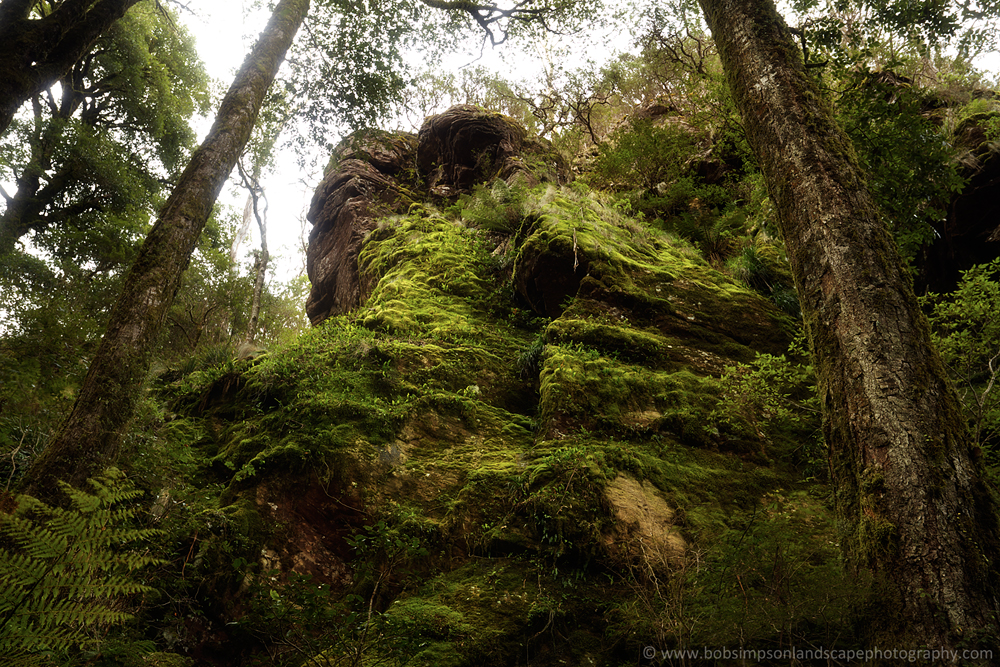 After a few days up in the hills, I finally found some mist when I drove down to Ebor Falls just outside New England NP. It was another freezing morning with frost covering exposed areas and a heavy mist wafting up the Guy Fawkes River valley. I concentrated on finding compositions around the top of the falls (1st and 2nd images below) before capturing the standard 'tourist' shot of the falls from the lookout (3rd image below). 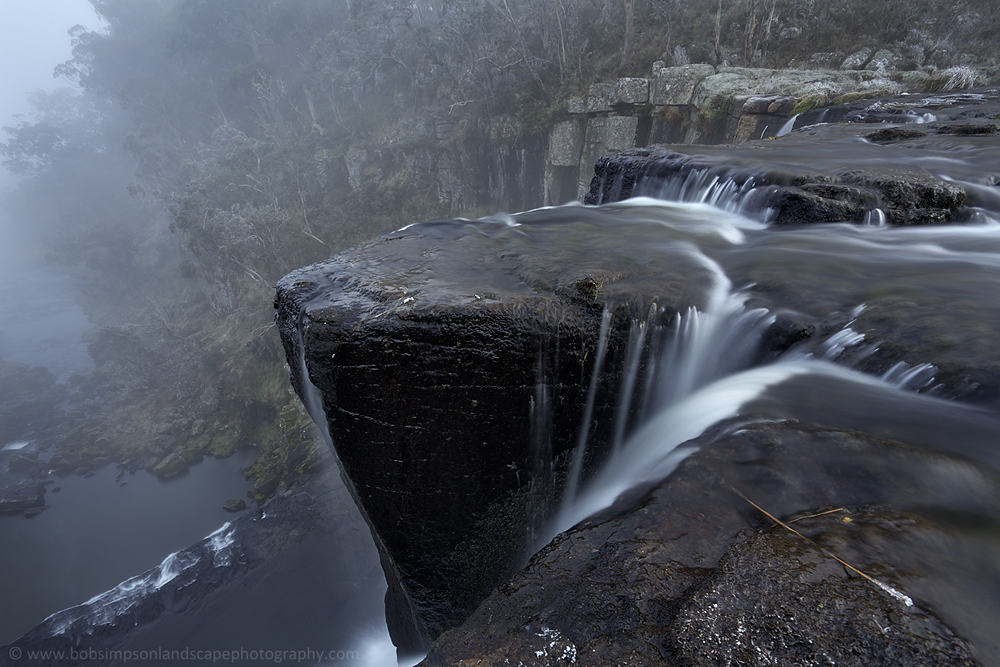 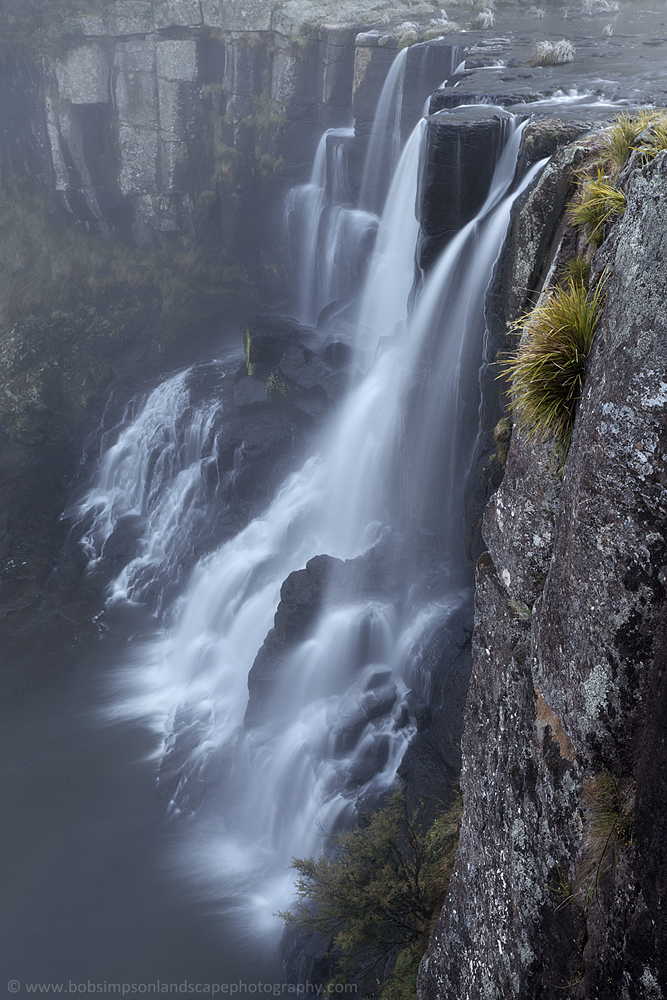 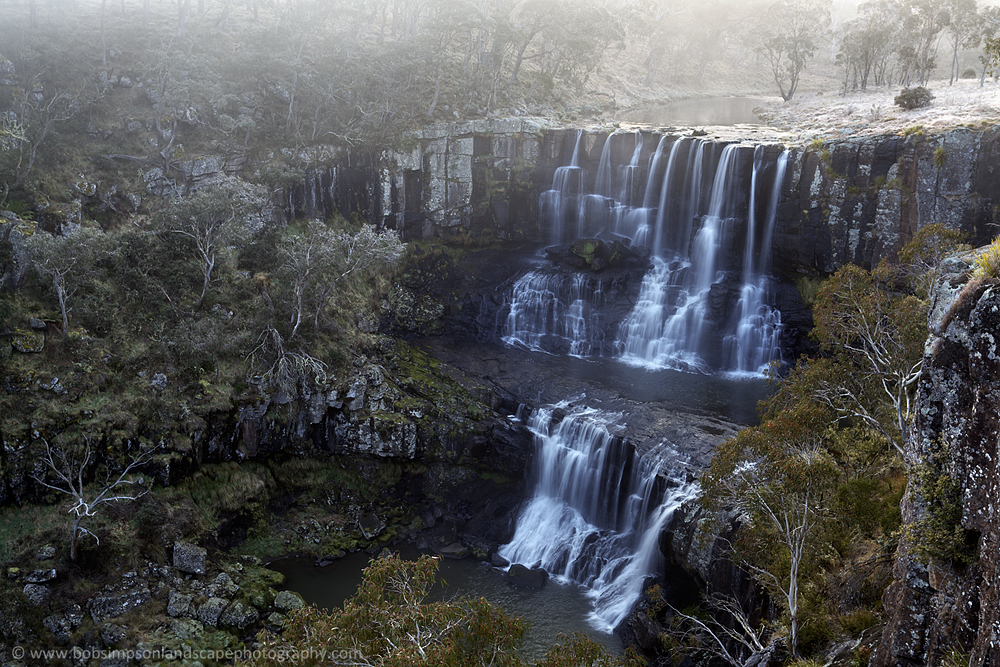 This view of the Guy Fawkes River valley filled with mist is only 5 minutes walk from the falls lookout. After capturing the wide view, I changed to my telephoto zoom to pick out more intimate scenes that conveyed the feeling of floating-in-a-sea-of-mist. 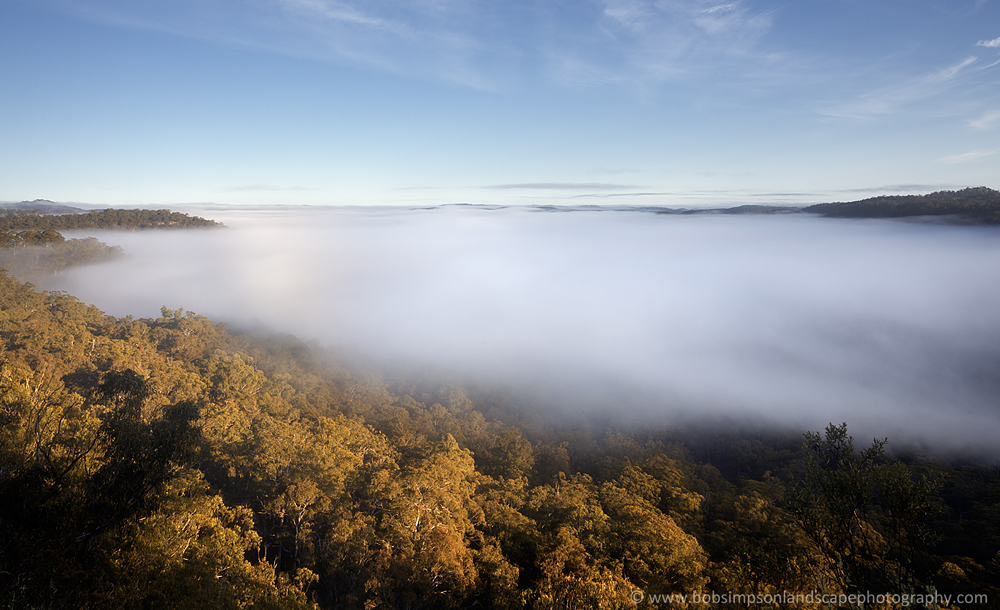 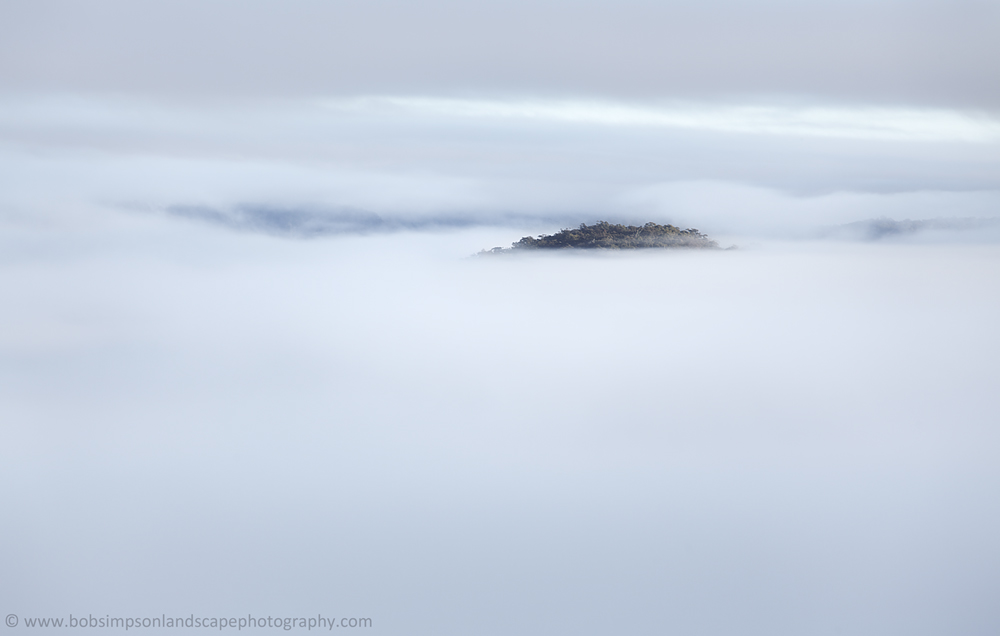 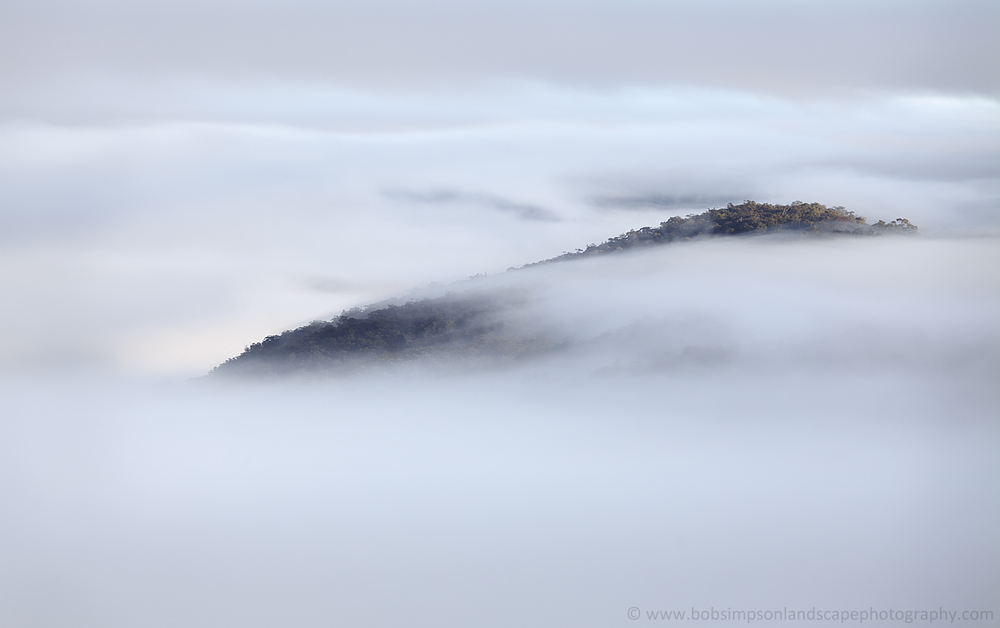 And finally, not the sort of thing I would usually photograph but the old Ebor cemetery was looking particularly haunting enveloped in mist as I drove back from the falls. There are newer parts of the cemetery, but I liked these old, unmarked headstones that added to the sense of mystery and melancholy that a small, country cemetery exudes. 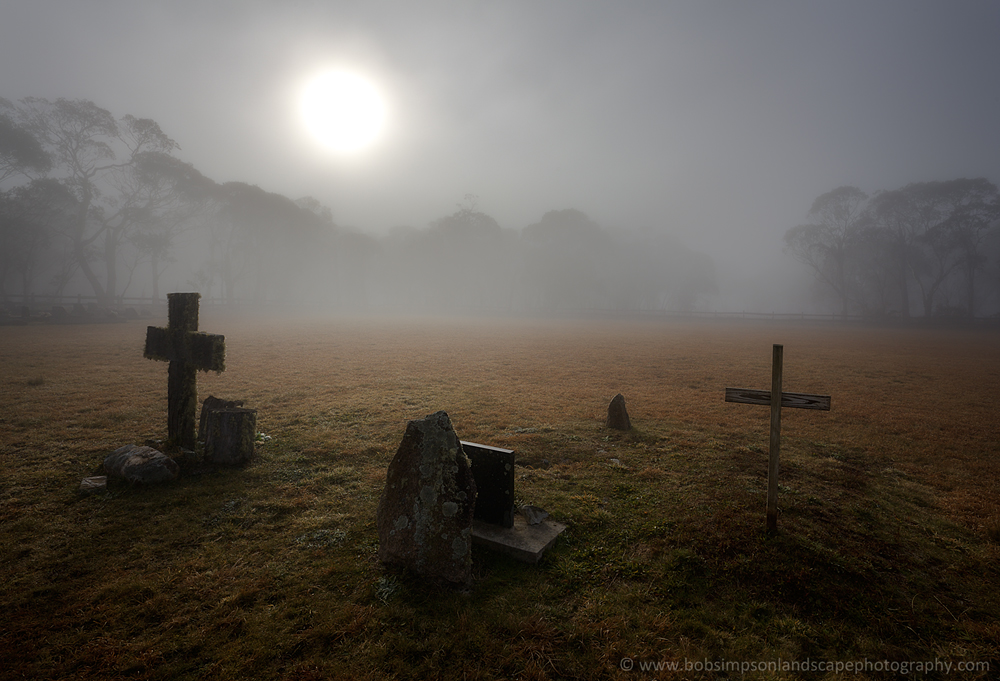 Driving home later that day I resisted turning on the car radio and breaking the spell that a few days of solitude in natural surroundings brings. The troubles of the world seem a million miles away when your main concern is dodging a falling icicle or hurrying to compose an image in the teeth of an icy wind before the light changes. I didn't get to photograph any of the misty snowgum woodland / beech forest scenes I had hoped for but, as always, nature provides plenty of alternatives. Next time it will be different, who knows how, but I can't wait to get back there and find out.