I first visited Red Beach on the southern tip of Bribie Island around 25 years ago when it was one of my Dad's favourite whiting fishing spots. Since then it has become one of my regular go-to spots for sunrise beach photos. The beach is protected from prevailing swells by Moreton Island so it has a wide, gently sloping foreshore that is sculpted and reshaped every day by the tides, creating some intricate patterns and textures over the shallow sand-flats. One of the visual features of Red Beach is the line of tall paperbark trees that tower over the shrubby foredune vegetation - the trees make great photo subjects themselves, especially when the morning light catches their white trunks, but they also contribute to a steady supply of dead timber along the beach which has plenty of potential to be used in landscape compositions.

When I visited in January, a rising tide was quickly flooding over the tidal flats and washing away the patterns in the sand. One of the first compositions I set up included a small patch of rippled sand surrounded by the rising tide - I thought this would make an interesting image if I used a long exposure to soften the water movement and highlight the ripples. And it might have, except during the 30 second exposure, my little patch of sand was swamped by small waves and the rising tide - the composition disappeared before my eyes before the exposure was completed. So instead, I turned back to the west to photograph the scene below. There were already a few inches of water over the tidal-flats but the rippled sand was still visible enough to create subtle converging lines to help draw the eye into the scene...including to those iconic Red Beach paperbarks. 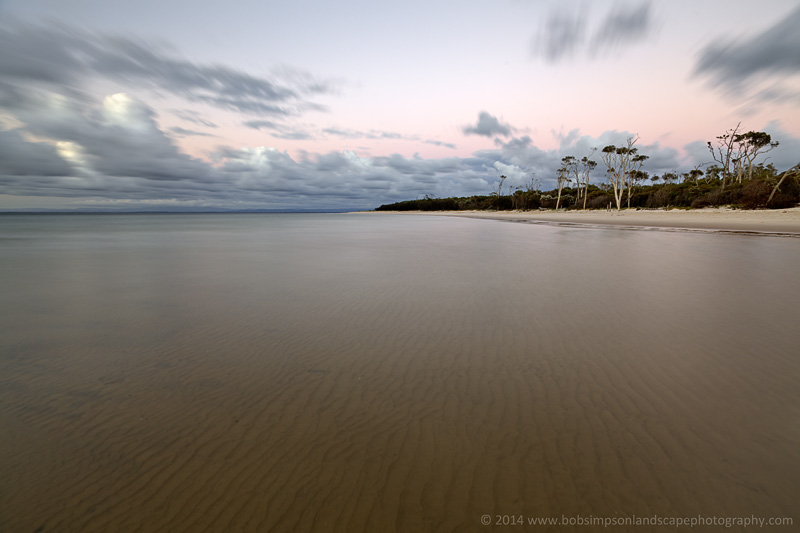 Clouds are something of a wild-card in landscape composition. You can pre-visualise and plan your photo-shoots as much as you like but you can never be sure what the clouds will be doing until you get there. If there are interesting clouds in the sky I often try and build a composition around them, looking for symmetry between their shapes and foreground patterns created by rocks, trees and hills. But clouds can also take centre-stage and be the main focus of a composition, especially around sunrise and sunset when they are lit up by warm light. A medium to long telephoto lens is great for picking out areas of cloud and sky that catch your attention. I usually try and include some land or sea to give the scene some context rather than just pointing my camera at the sky. 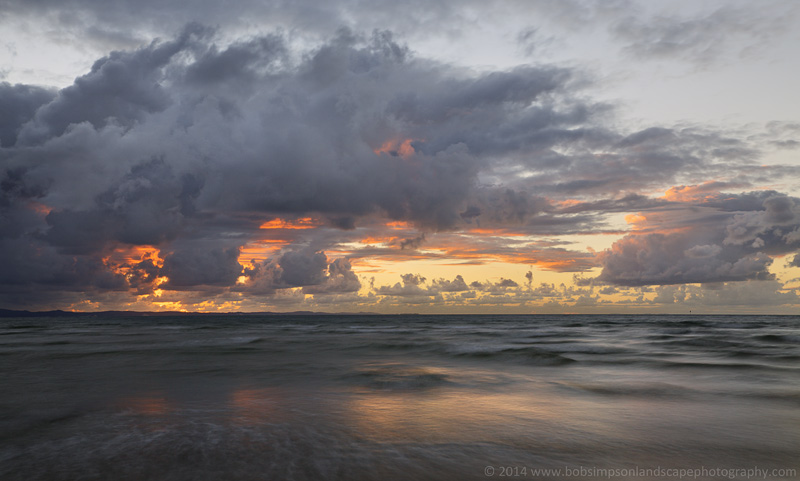 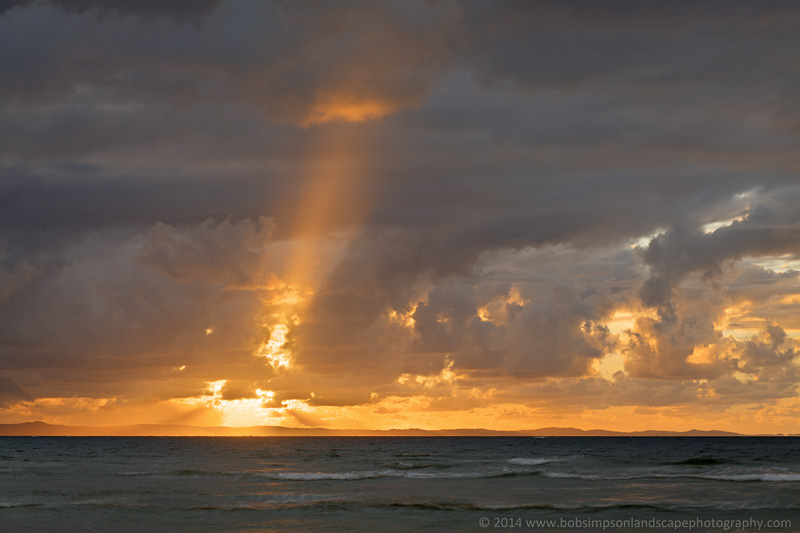 Rain squalls had been threatening to sweep over the beach throughout the session but, apart from a few drops, they held off. The dark clouds created a lot of drama so I looked for long-shore compositions that showed the advancing rain in the background. 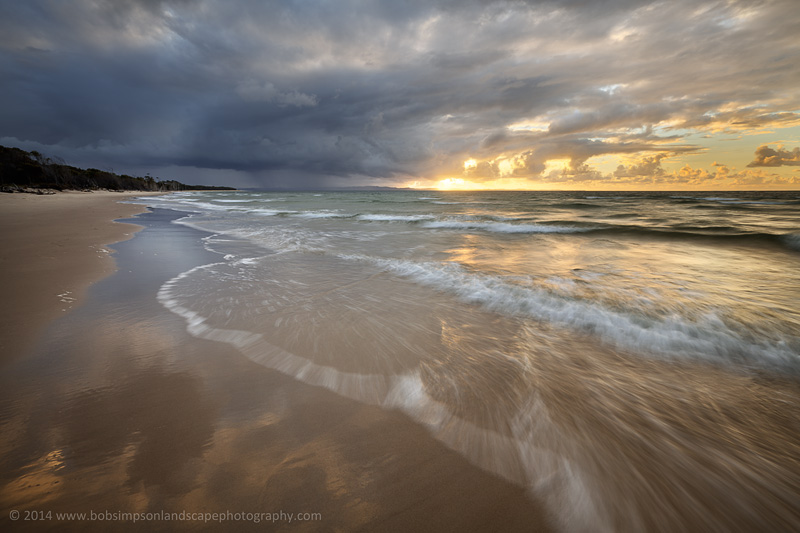 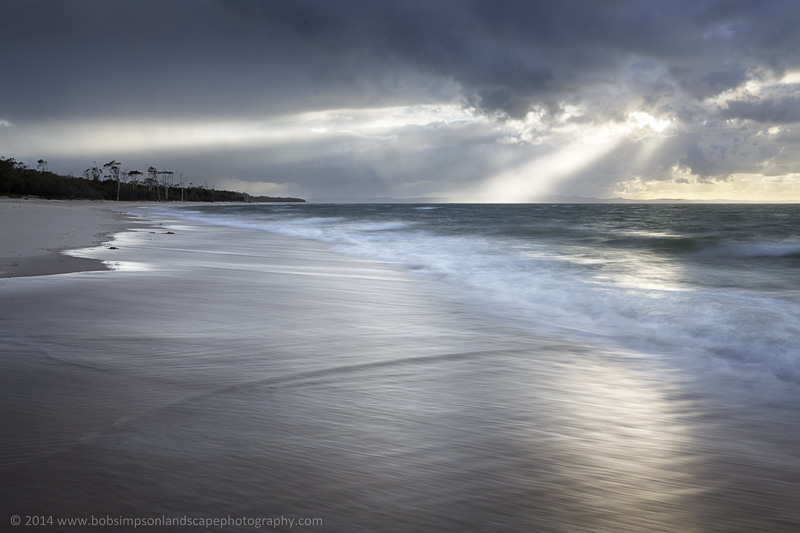 More cloud-scapes, this time taken from Deepwater Point at Caloundra early in January. 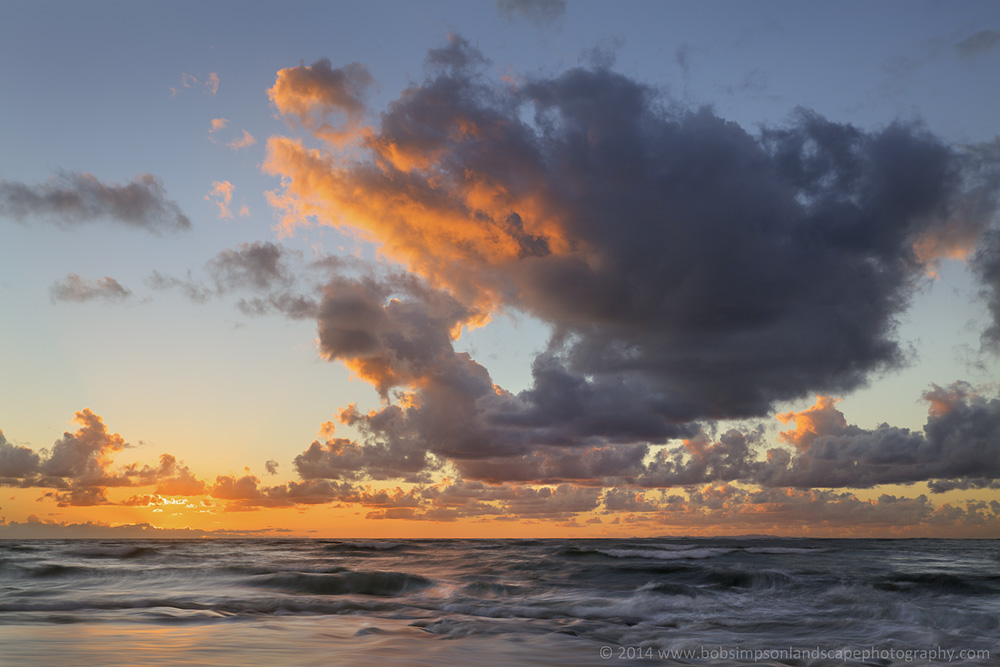 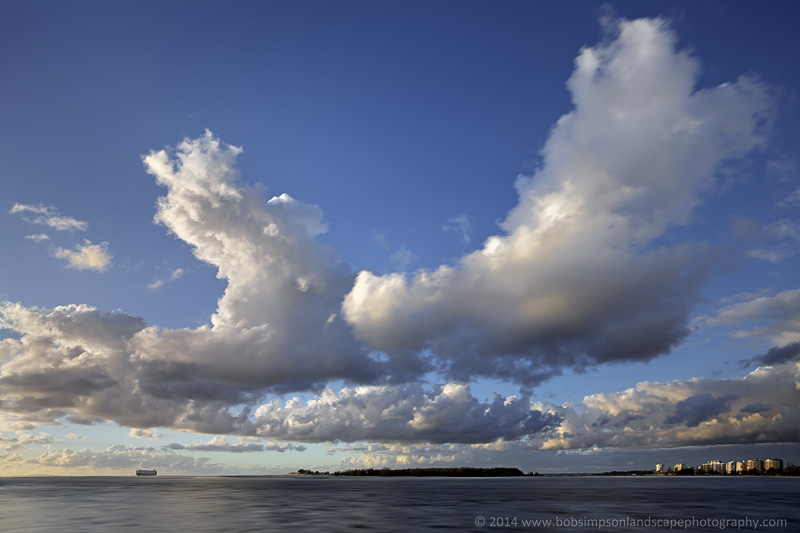 Wurtulla Beach is a long stretch of sandy foreshore broken only by a barnacle-encrusted rocky outcrop around 10 minutes walk from the car-park. The tide was low enough that I could scramble around on the rocks looking for ways to include them in a composition. A common feature in all three images below is the little solitary cloud that was hovering low in the sky to the south - it helped to break up what was an otherwise cloud-poor sky and was in a great position to catch the morning colours and to create a reflection in the wet sand. To maximise the reflection in the second image below, I waited for a large wave to push right up the beach and then recede leaving a mirror-like surface on the sand. 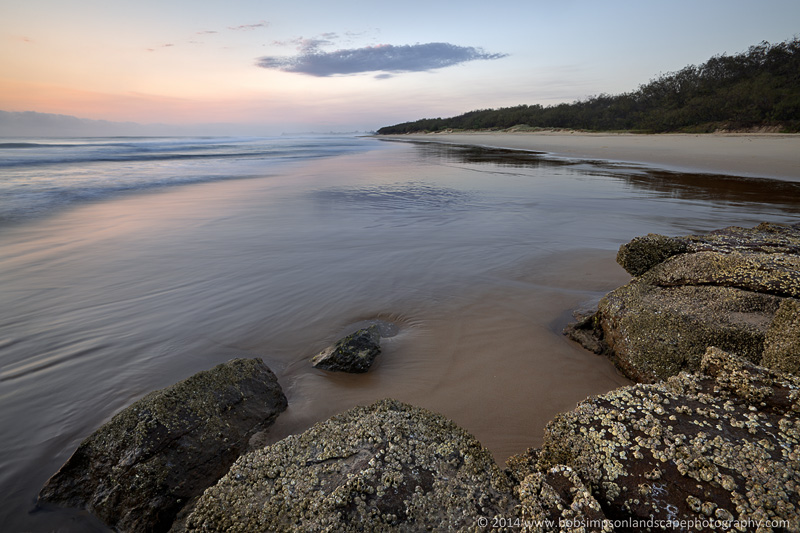 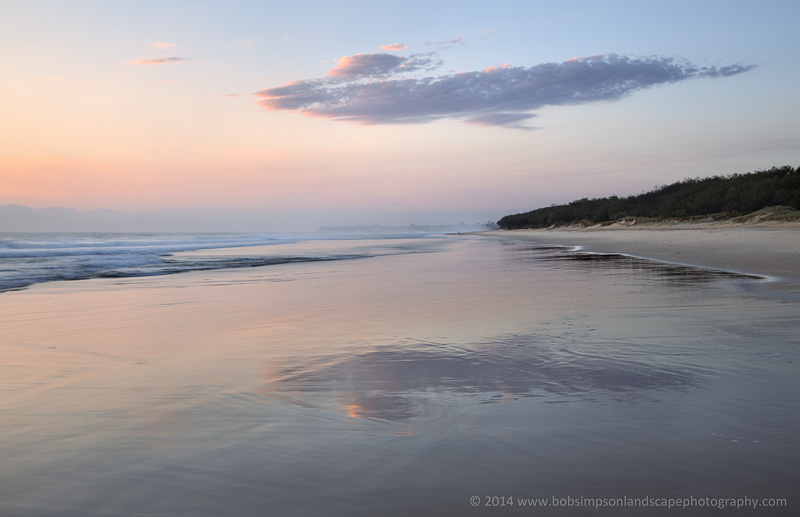 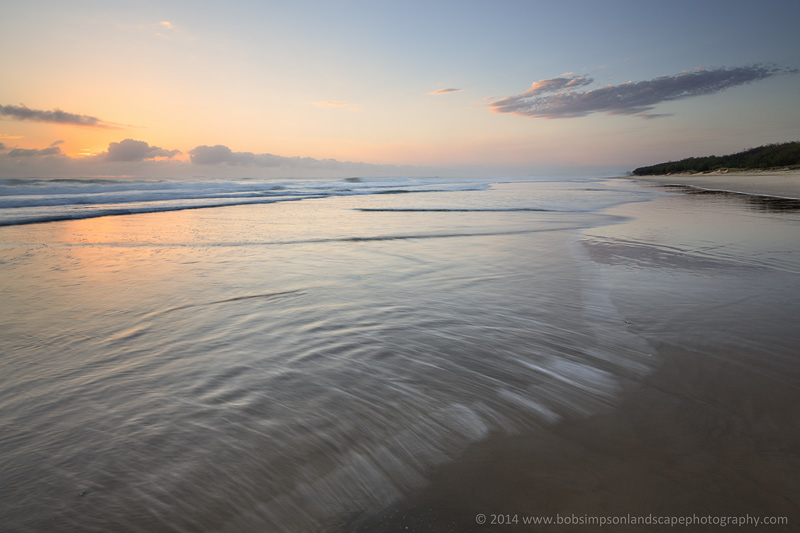 And to round out the month, this is a selection of images from a productive morning spent at Point Cartwright. The first two images are 30 second exposures taken from the beach just to the south of the point before sunrise. The main thing I had to be aware of while searching around for compositions was to avoid leaving footprints where I might want to photograph - it's incredibly frustrating to settle on a composition and find you've already planted your big fat foot right in the middle of it. I could see by torchlight that the smooth sand around these rocks would add to the overall feel of the images so I managed to give it a wide berth until I captured these shots. 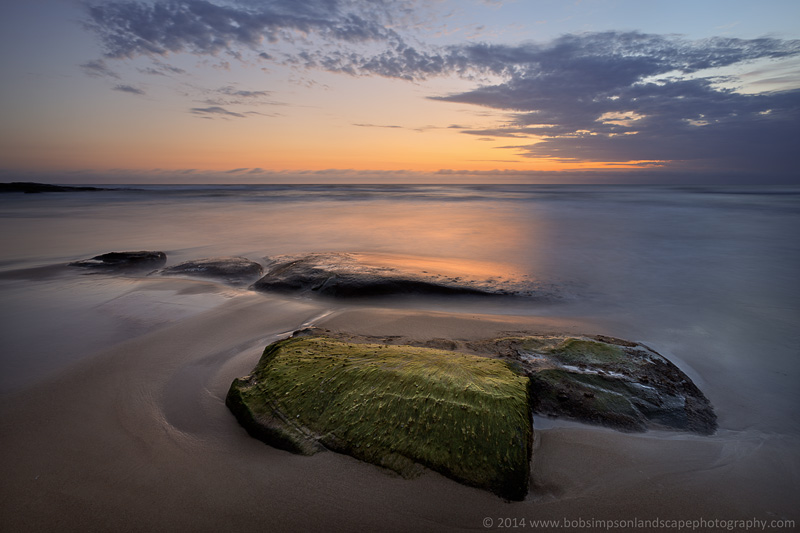 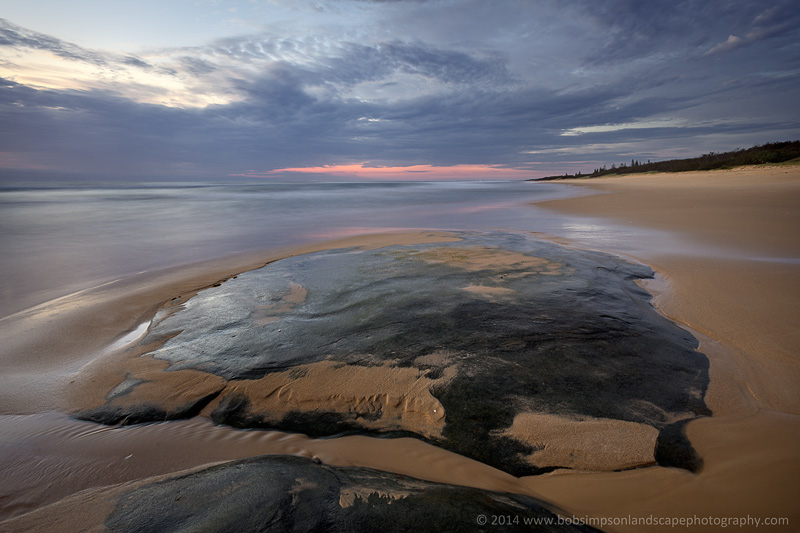 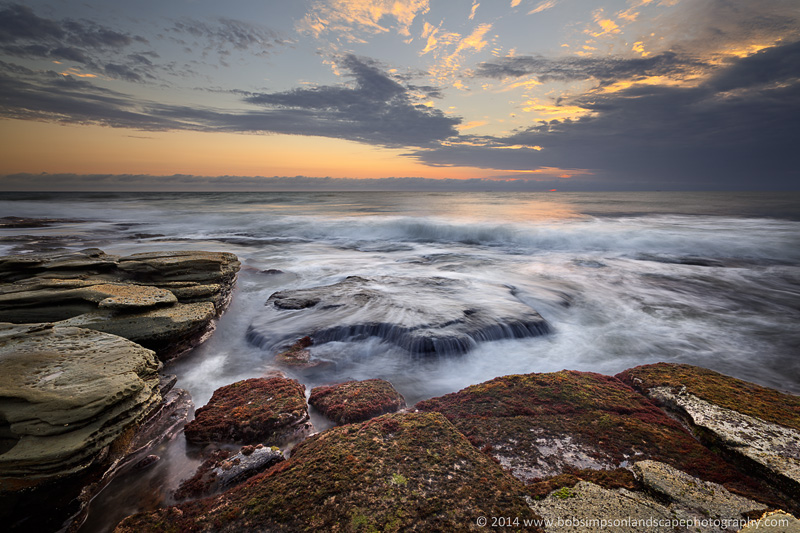 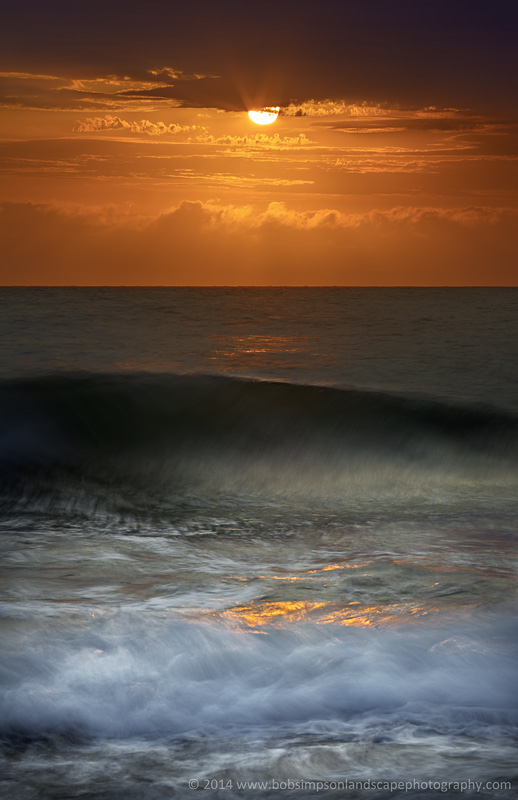 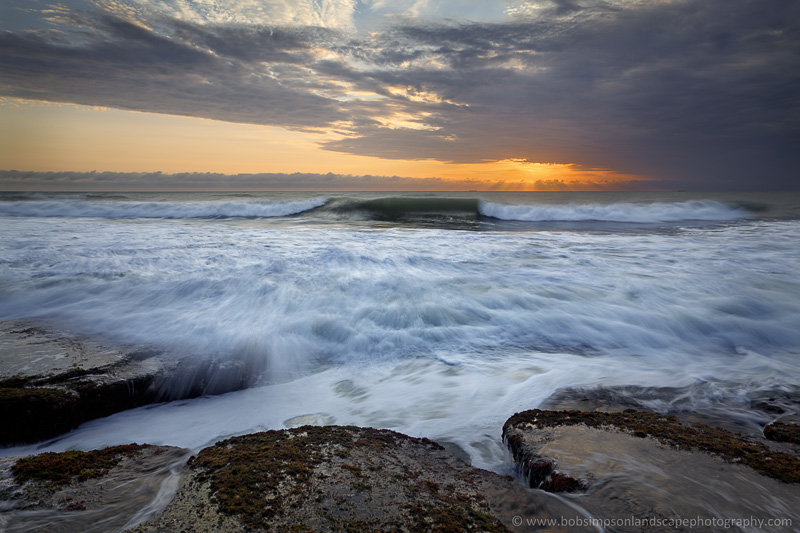 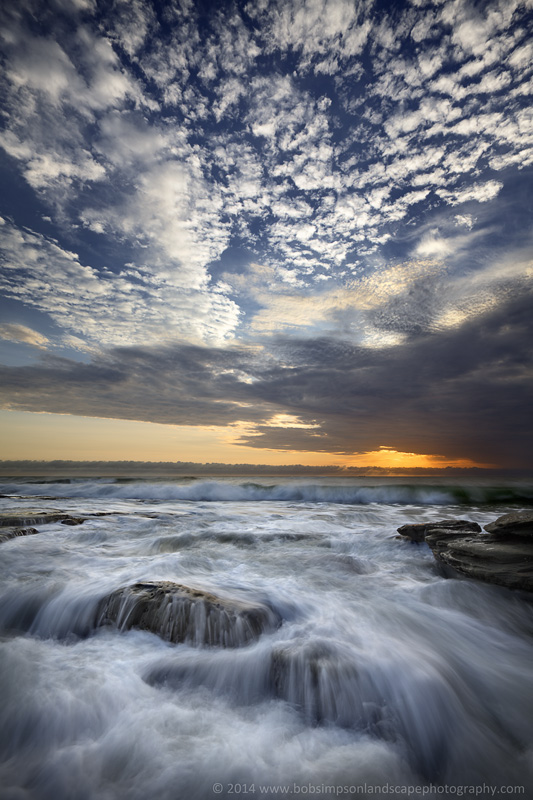