New England National Park is an exciting place for a landscape photographer. The photographic options range from high, rocky mountain views to misty, green forests with crystal-clear cascading streams. Located in the ranges between Armidale and Coffs Harbour, the National Park is part of the Gondwana Rainforests of Australia World Heritage Area. Visitors have the option of camping or cabin accommodation, and can explore the park via its many graded walking tracks.

My visit to New England NP in June this year was only my second time there. But as with any location, a little familiarity provides a great head-start when it comes to landscape photography. I had already marked down certain locations in the park as being worthy of a return visit, and ideas for new images were running through my mind during the eight hour drive to Thungutti camping area, just inside the park boundary.

So here are a few of my favourite images from my latest trip to New England NP, along with a little information behind their capture.

* * *
I arrived at Thungutti in mid afternoon and quickly set up camp in the single-digit temperatures. After a quick cup of coffee and with sunset approaching, I decided to take the short drive up to Point Lookout. There are two fenced lookouts a short walk from the carpark - both face approximately eastwards and provide grand views over lines of mountain ranges and on to the coast.

The photographic options are a little hampered by overhanging branches and other trees growing up in front of the lookouts, so I put on a 70-200mm zoom and looked for compositions among the folds of distant mountains. The late afternoon light was quite hazy and I wasn't confident this approach would produce much of interest, but it felt good just to be there as the gathering dark filled the deep valleys and climbed towards the top of the ridges.

The light can change very quickly and dramatically in the mountains, particularly around sunrise and sunset. Just as the sun touched the horizon behind me, veils of mist began to drift across my view catching the last of the afternoon sunlight. At the same time, shards of orange-pink light picked out the treetops and overhanging branches right in front of me. So with a quick change back to my wide angle lens, I captured this scene just moments before the sun disappeared and the blue shades of evening descended over the scene. 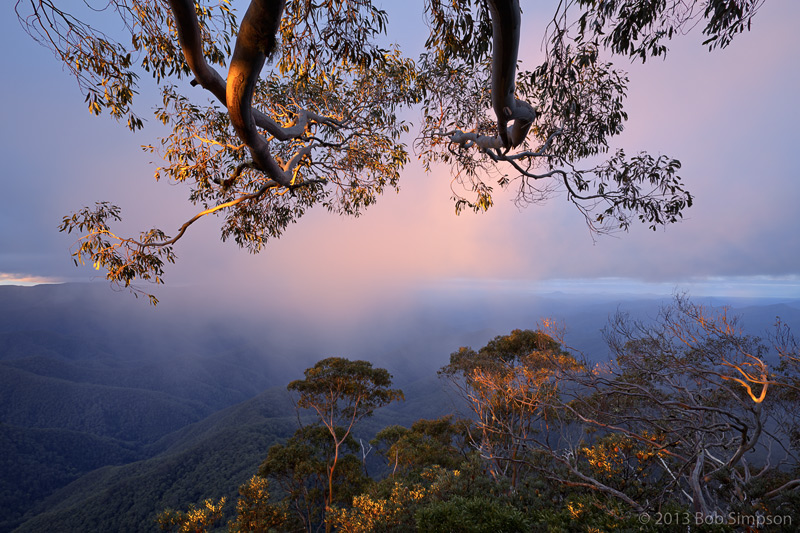 * * *
After a quick bowl of cereal and with the clock just nudging 5am, I set off on the 40 minute walk to Wright's Lookout by torchlight. This rocky lookout was the scene of perhaps my most memorable photographic experience the previous year (see New Horizons) and I was keen to explore its potential further. As I climbed up the last few metres of rocky trail onto the lookout, I could see there was none of the thick fog that had enveloped my first visit there - the cold pre-dawn sky was a sea of stars and a bright moon hung low to the east.

There was already a red glow low on the horizon 45 minutes before sunrise so I immediately started looking for photographic options along the cliff edge. A stunted little tea-tree perched right on the edge of the cliff caught my attention in the torchlight and became the focus of my first composition for the morning. I was going to frame it as a silhouette against the lightening sky, but it's twisted branches were just too good to miss, so instead I settled on the composition below and used the torch to paint light onto it during a 30 second exposure. 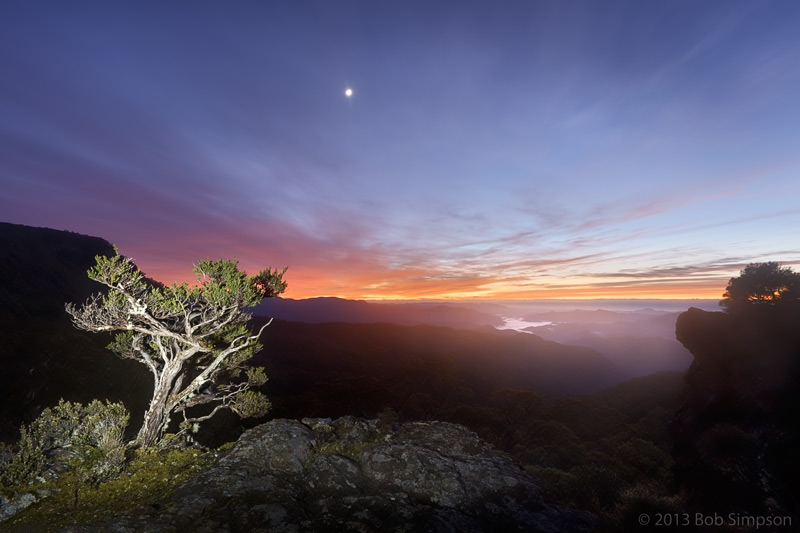 Next morning I retraced my steps up to Wright's Lookout and was rewarded with an even more spectacular sunrise than the morning before. What began as a sliver of pink close to the horizon steadily spread and grew in intensity, lighting up the broken cloud banks with a depth of colour that words and images can't really do justice. At the height of the colour just before sunrise, everything around me - rocks, shrubs, my clothes and my hands - was bathed in a beautiful crimson glow. And the visual experience was enhanced by the scents of the Australian bush wafting up on impossibly crisp mountain air, and by the liquid melodies of lyrebird calls echoing across the valleys. 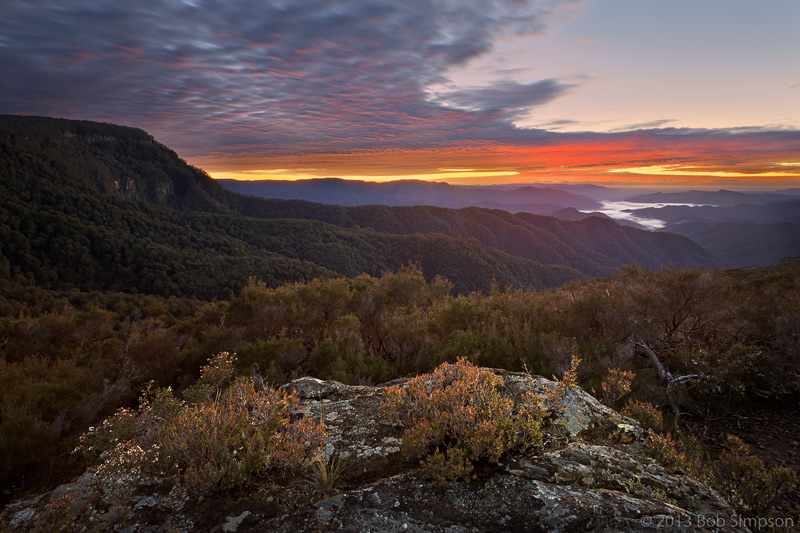 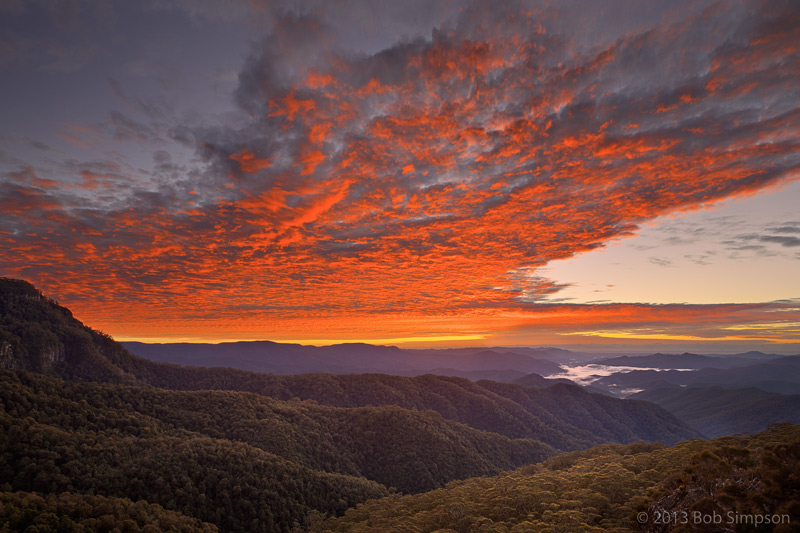 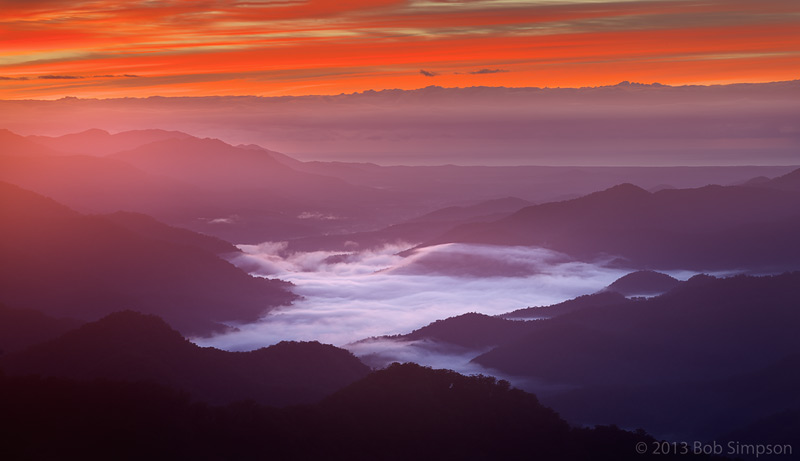 * * *
The Styx River rises just below Point Lookout and not far from Thungutti. The Tea Tree Falls walking track follows along its course, crossing it in several places and giving glimpses of its dark, shaded headwaters. It's only a small stream up this high but hidden away in secret pockets are beautiful little creek-scapes of mossy boulders and crystal clear cascades. I heard these falls well before I saw them, and it took some careful scrambling down a steep bank and through tangled vegetation to get into position to photograph them. 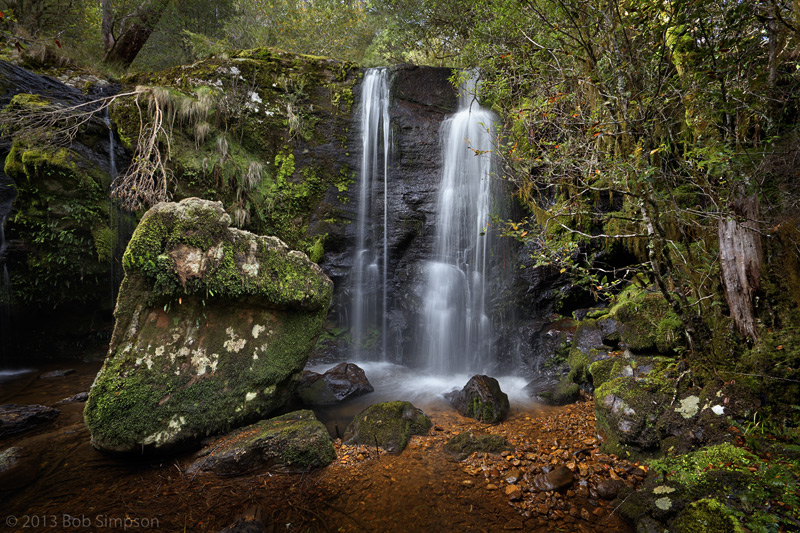 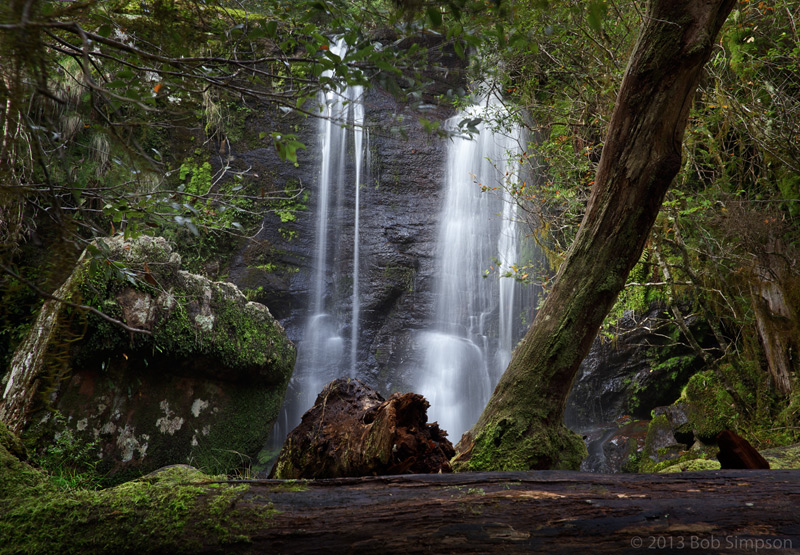 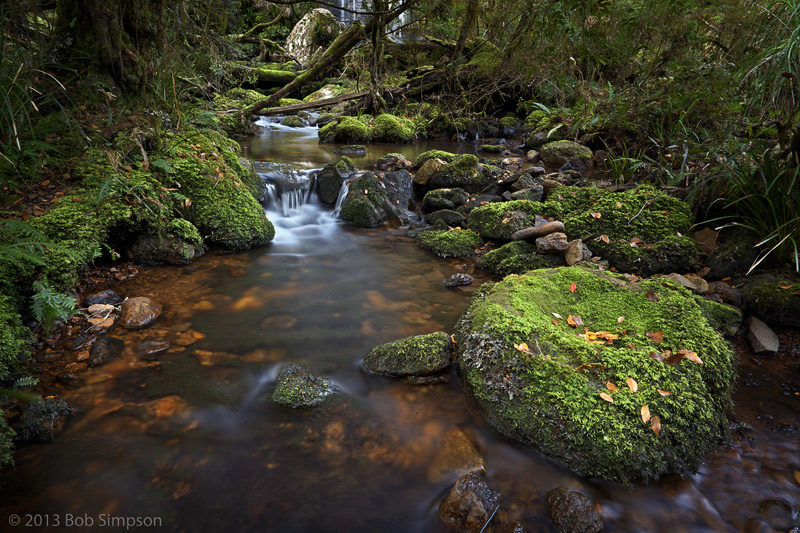 * * *
The Lyrebird Walk and Eagles Nest Track wind around the edge of the escarpment below Point Lookout, through green forests of Antarctic Beech and tree ferns. This is the sort of place I always attach a polarising filter to my lens to help tame glary reflections on wet foliage and help bring out the vibrant greens of the forest. The only problem with that is that a polariser also cuts the light reaching your camera's sensor by one to two stops, so you need to use slower shutterspeeds, wider apertures or higher ISOs - or some combination of these. A slow shutterspeed is not a problem as long as you have a sturdy tripod and there isn't too much breeze blowing the vegetation about. A wide aperture limits your depth of field so it becomes harder to keep everything from foreground to background in focus. And a high ISO introduces more 'digital noise' into your images leading to a drop in image quality. There's no secret remedy to these problems - it's a matter of finding the best compromise you can. If possible I keep my ISO at 100 or 200, aperture around f8, and compose images so key pieces of vegetation (like a large fern frond in the foreground) are protected from any breeze. 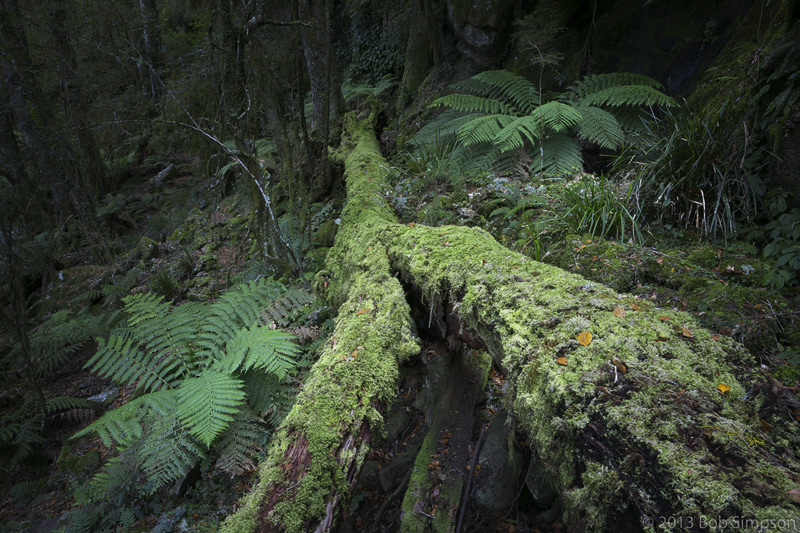 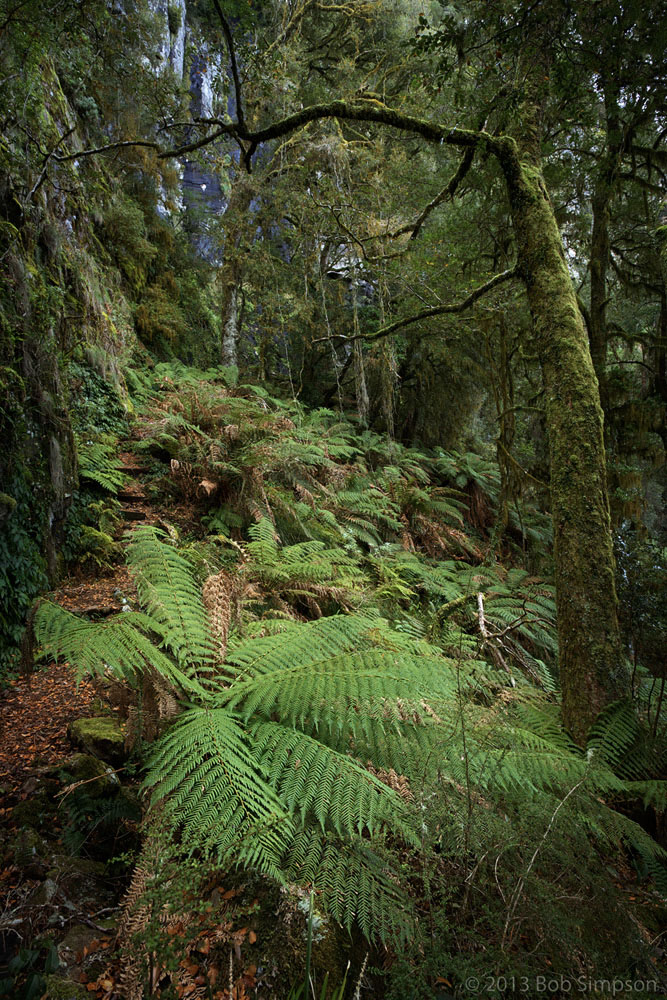 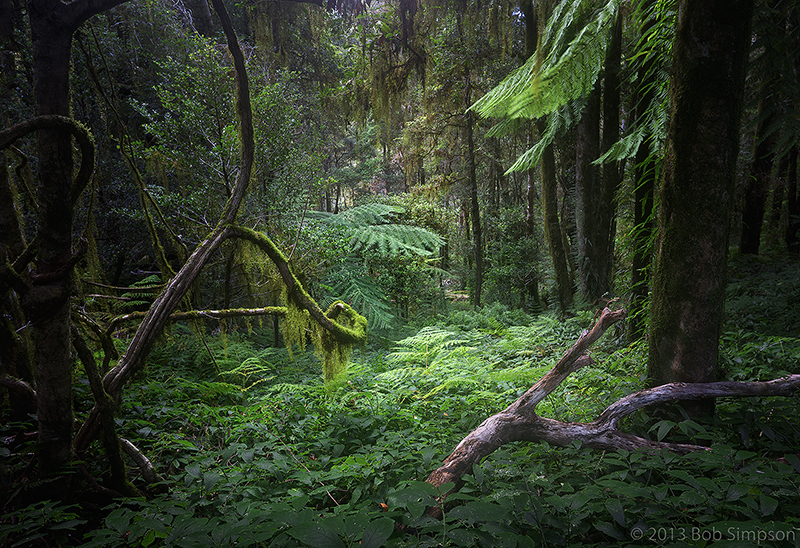 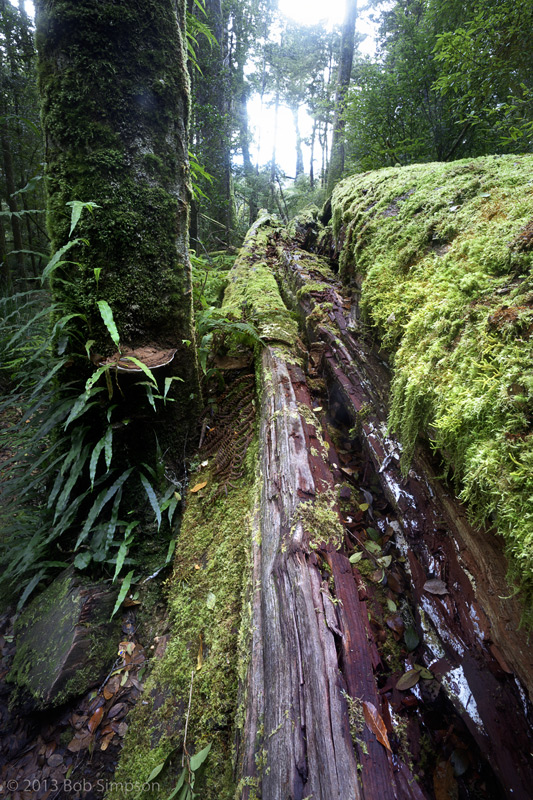 * * *
That's a very brief look at what's on offer at New England National Park. Next time I visit I plan to spend some time focussing on the snow gums and other high-country vegetation that help give this area its character, and also explore the Five Day Creek valley and its hidden cascades. I suspect there will be many more trips to this area before I start to feel I've really tapped into its secrets.