I have photographed Lion Rock a few times now - its distinctive shape and rugged feel make it an appealing subject, but because of its location off the tip of a headland there are only a couple of angles available to the land-based photographer. This is my favourite spot to photograph it as you can get quite close and down to eye level with the rock. You can include other parts of the rocky shore in the composition but this isolated view has the most appeal to my eye. At this time of year, the sun rises directly over Lion Rock making it difficult to choose an exposure that doesn't render the rock as a silhouette, but it also provides a dramatic backdrop of early morning light. For this image I blended several different exposures together to capture the full dynamic range of the scene. 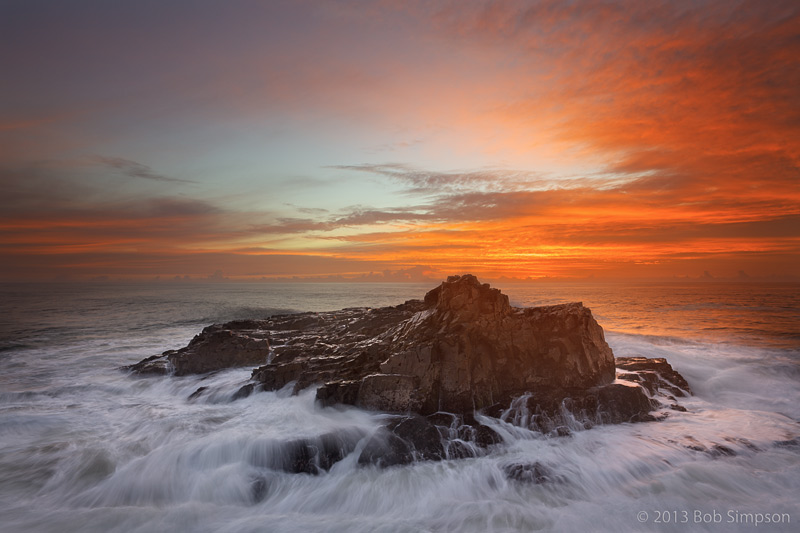 After watching the sunrise at Lion Rock, I took a walk along the beach at Alexandria Bay and captured these next two images. There are several spots along the beach where water seeps out of the coastal hills and runs across the beach in narrow rivulets - these expose deposits of black sand that creates some great contrasting patterns with the overlying layer of white sand. 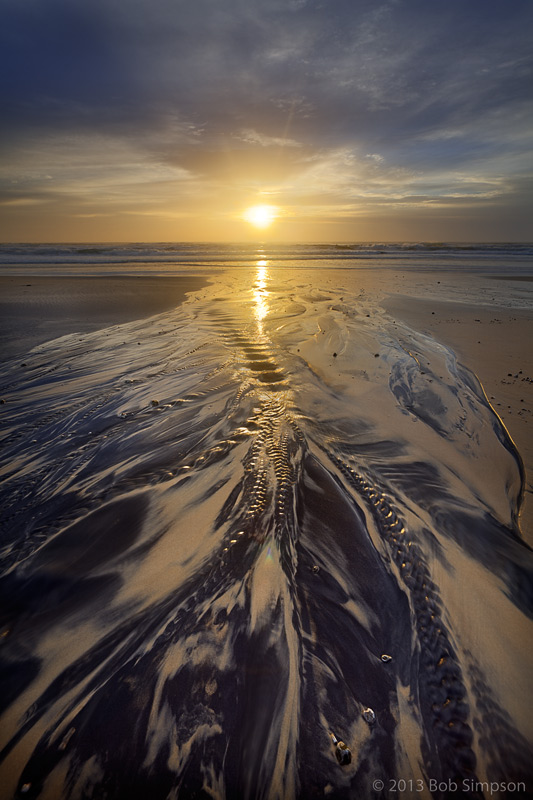 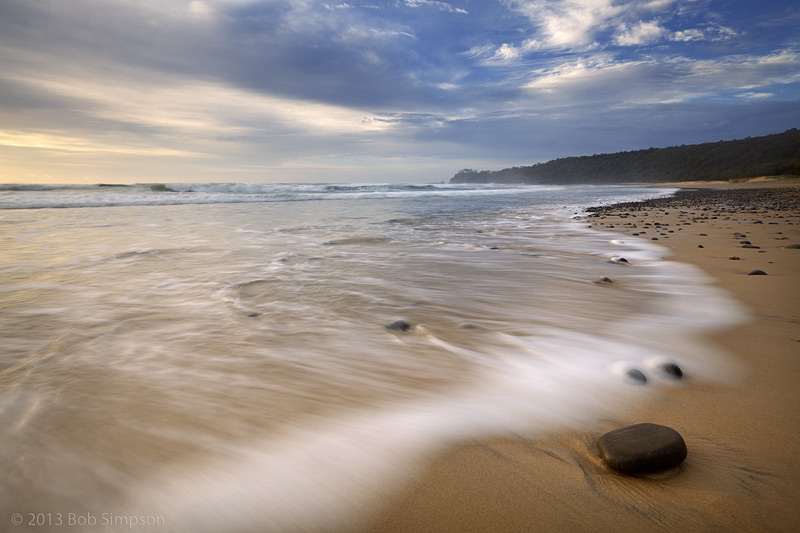 I also visited Tea Tree Bay during the month and captured this image of the morning sun lighting the tea trees at the western end of the beach. 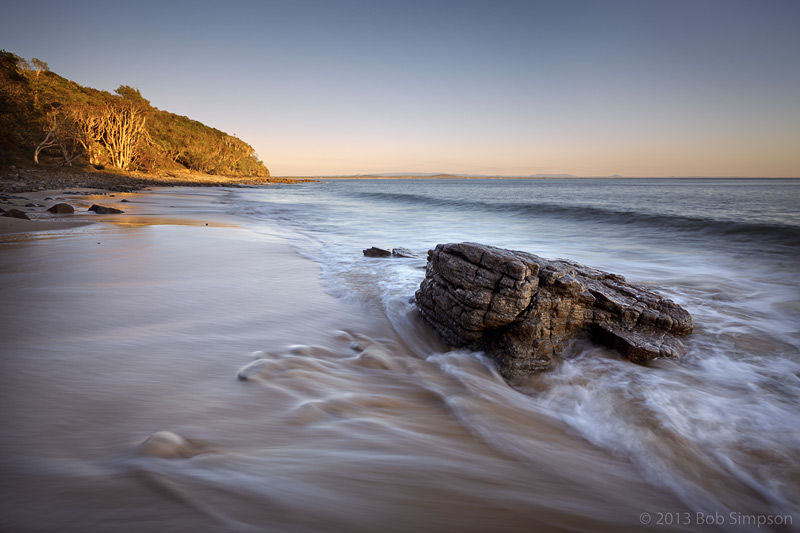 We have had a wet summer here in south-east Queensland so I have mostly avoided venturing into areas of rainforest where the tracks are muddy and slippery, and in some cases closed due to heavy erosion. The weather has settled down somewhat now that we're in autumn so over the last month I've revisited some of my favourite forested areas. Obi Obi Creek flows through Kondalilla National Park and offers many picturesque creekscapes framed by lush rainforest. I hiked to this spot several kilometres downstream from Baroon Pocket Dam on a misty morning earlier in the month. The flow was still strong, so places where I have previously been able to rock-hop around on midstream boulders were out of reach, but there were still plenty of photographic options available from the banks and shallow edges. 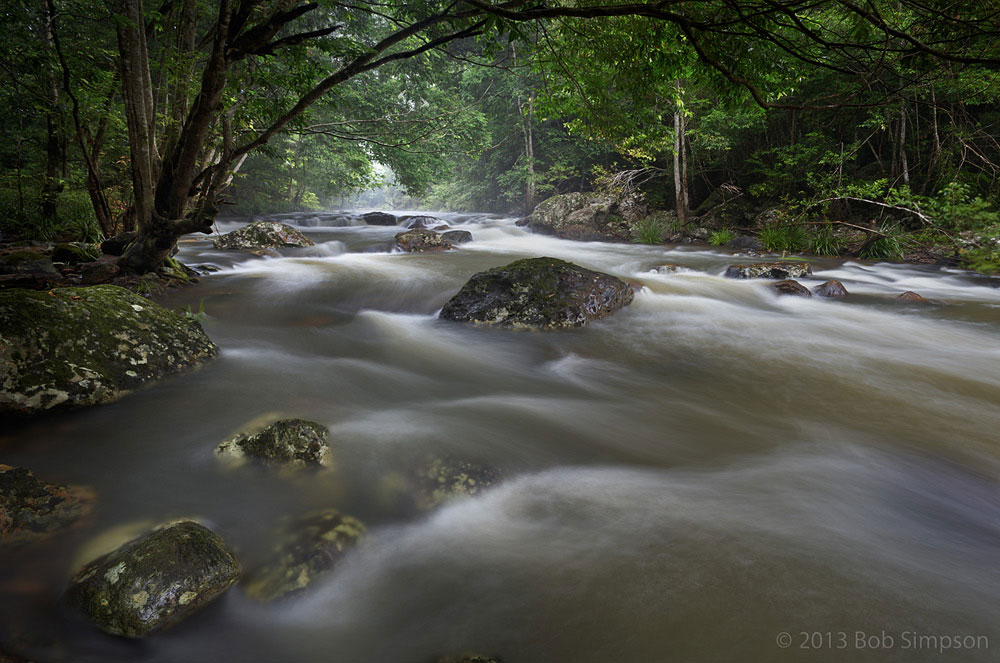 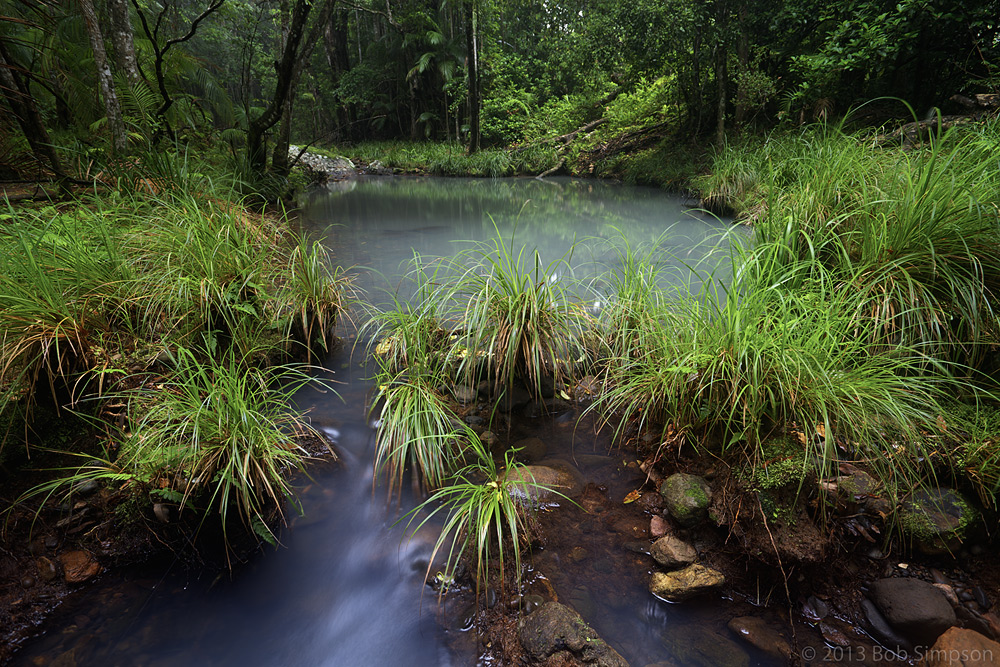 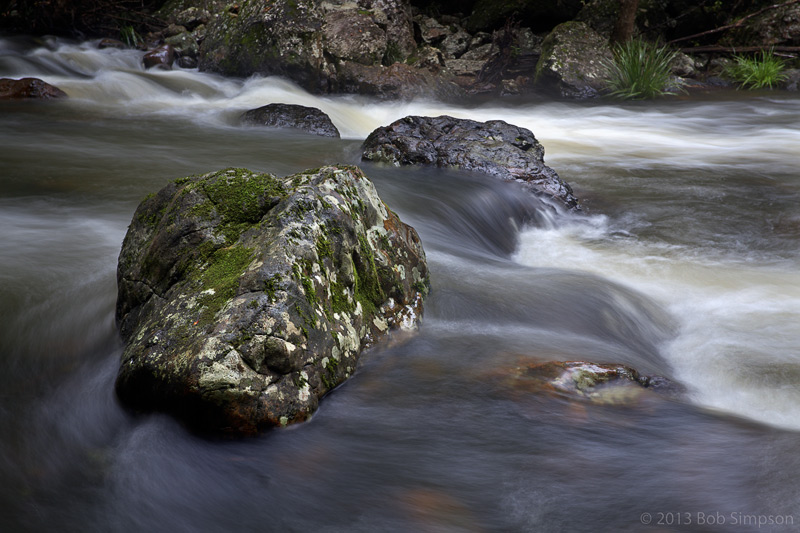 Gheerulla Creek also flow through rainforest in its upper reaches. Gheerulla Falls (first image below) is an obvious target for photographers, but there are plenty of other worthwhile options if you follow the walking track along the creek for many kilometres downstream. It is often relatively dark down along rainforest creeks like this so long exposures are generally required to achieve a good result. I like to use a polarising filter for creek images, to cut reflections and boost the colour of vegetation, and that further reduces the light available to the camera and lengthens the exposure. If you don't like the soft water effect produced by a long exposure, there is always the option of pushing the ISO up to achieve a faster shutter speed but this will introduce more digital noise and degrade the image. One trick I sometimes use if I want to partially freeze the water movement is to take multiple exposures of the scene at different ISO settings - low ISO for the general scene, and high ISO for the water - and then blend these together in Photoshop. That way, the noisier, high ISO part of the image is confined to the water, and you can apply some selective noise reduction to this without degrading the whole image. For these images, I just bumped the ISO up to 200 which still produces very clean and noise-free images, and composed the images so the soft effect of the moving water was not too obtrusive. 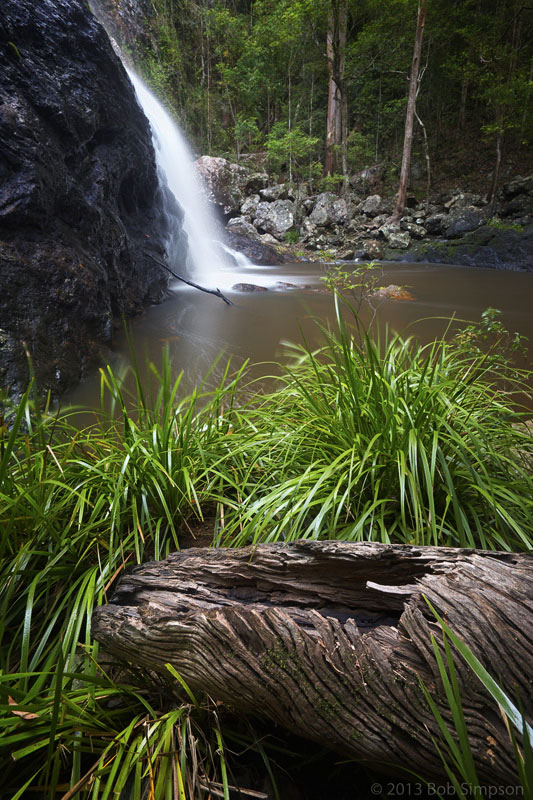 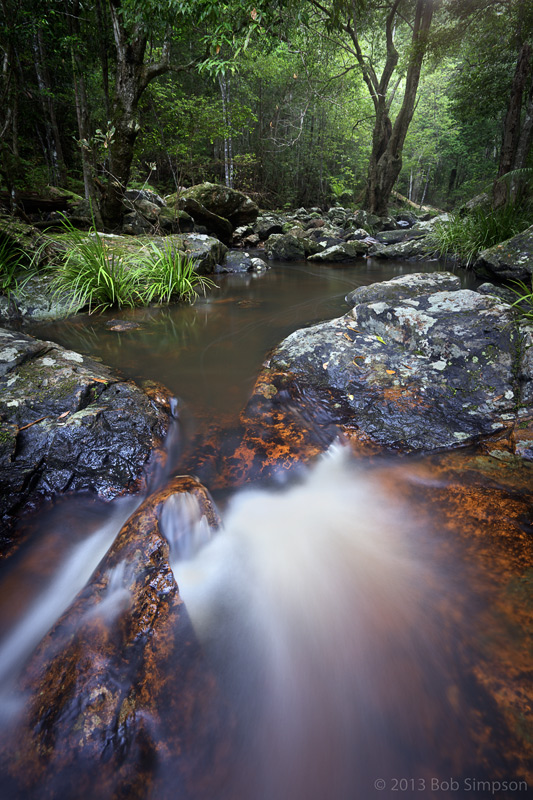 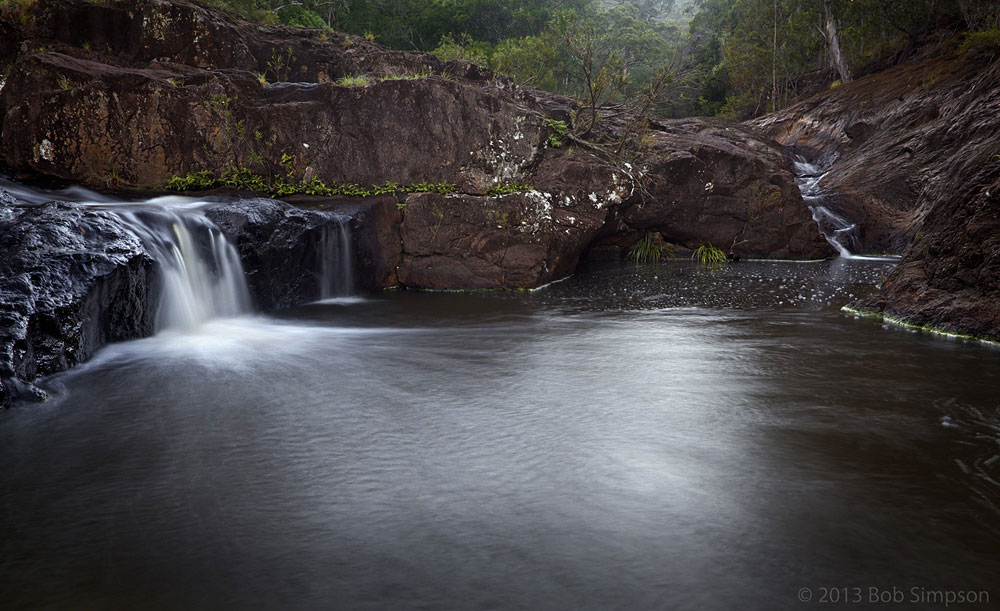 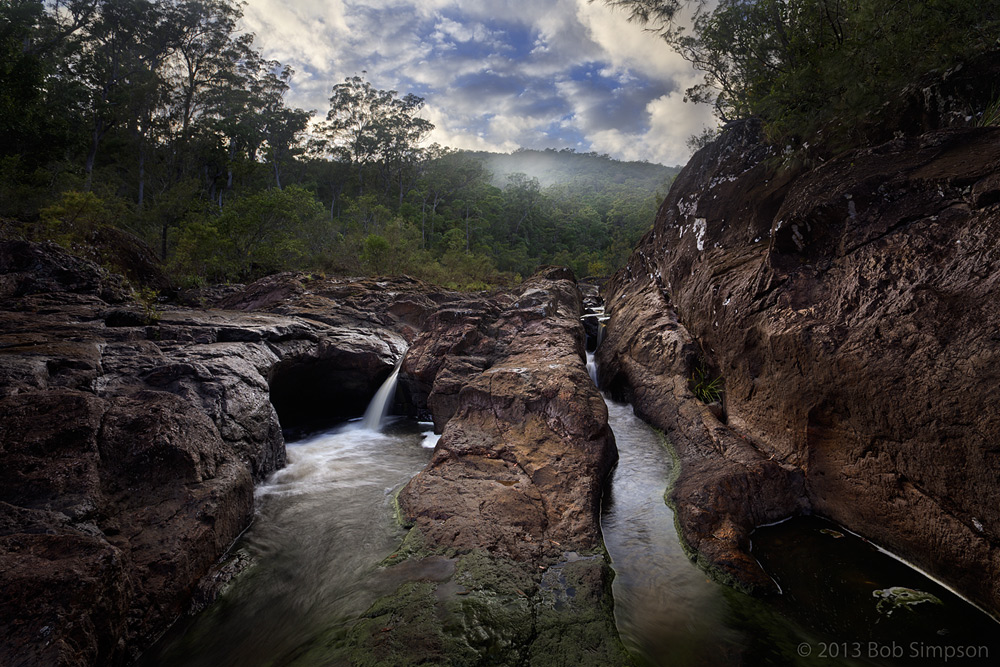 I spent more time sheltering from the rain than taking photographs when I visited Caloundra Head, but the heavy clouds added a dramatic backdrop to the few images I brought home. For a few minutes, the rising sun looked like it might break through and light up the dark sky, but this was as far as it got (below) - the heavy cloud bank at right moved across and blocked out the sunrise light and then dumped another shower of heavy rain on the shore. 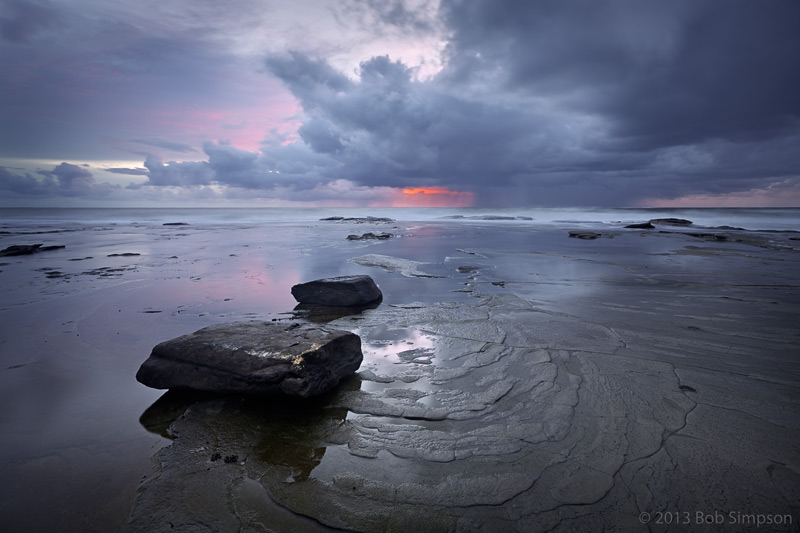 And finally, a 47 second exposure has turned this view taken at Point Arkwright into a slightly surreal scene of streaky clouds and misty water. This image was captured around half an hour before sunrise without any filters. 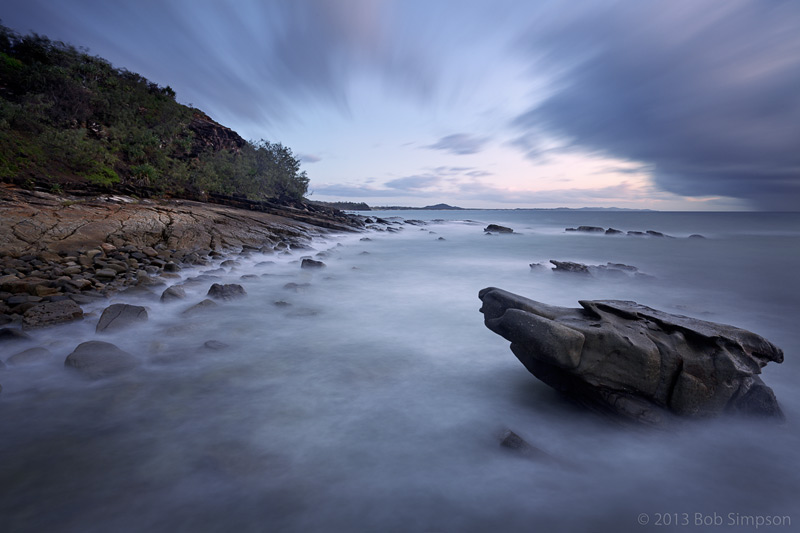