The first two images below are from the headland at the northern end of Sunshine Beach. You can see they were taken from much the same spot and looking in the same direction (north), but they are otherwise quite different images. The main focus of the first image, captured around 15 minutes before sunrise, is the misty look of the water created by the 15 second exposure and the way this contrasts with the sharply defined rocks. There was a strong swell running so even a much shorter exposure time would have created some motion blur in the waves, but the 15 second exposure (made possible by the still dark conditions) has blended successive waves and their backwash into a misty mass of white. I usually prefer a shorter shutter speed to give waves more definition, but in this case I felt the misty effect helped created a more mysterious and intriguing image. It was pointed out to me that by excluding the foreground rock, the viewer's eye would drop straight into the white void of water and potentially make the image more mysterious-looking. I agree, but I also think that including the foreground rock accentuates the overall contrast between water and rock, light and dark, soft and sharp. I also think the fact that there are three lines of rock jutting out into the water, rather than two if I had framed the foreground out, creates a more complex scene, but also a more balanced one. 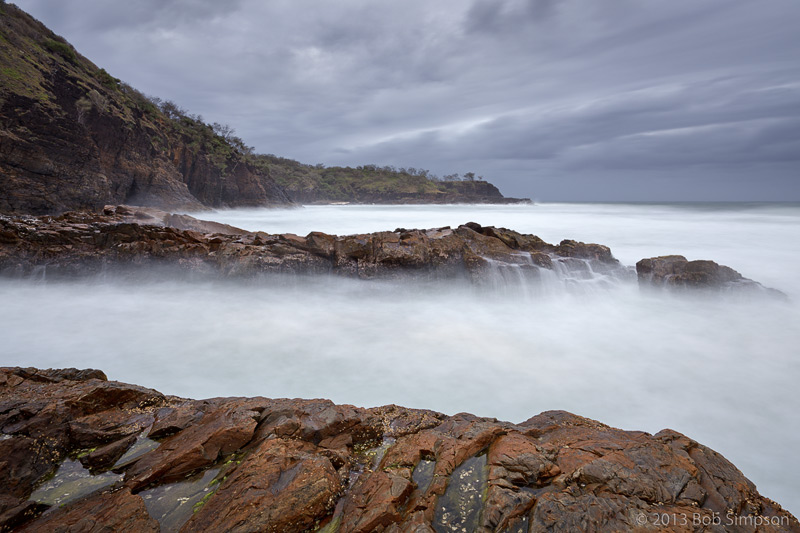 The second image (below) was captured around 30 minutes after the first, so the sun had risen but was heavily obscured by thick cloud. In this image, the main attention is drawn to the sky by placing the horizon below the centre-line of the image. The water and rocks are still important to put the scene in perspective and as a natural frame, but it is the colour and shape of the clouds that were my main focus. I captured several versions of this image as the clouds moved right to left across the composition, but this one felt the most balanced to me in terms of the distribution of colour and texture across the frame. The 0.5 second exposure is more in line with my usual preference for photographing waves than the previous image, as it retains plenty of detail but also gives a strong feeling of motion. 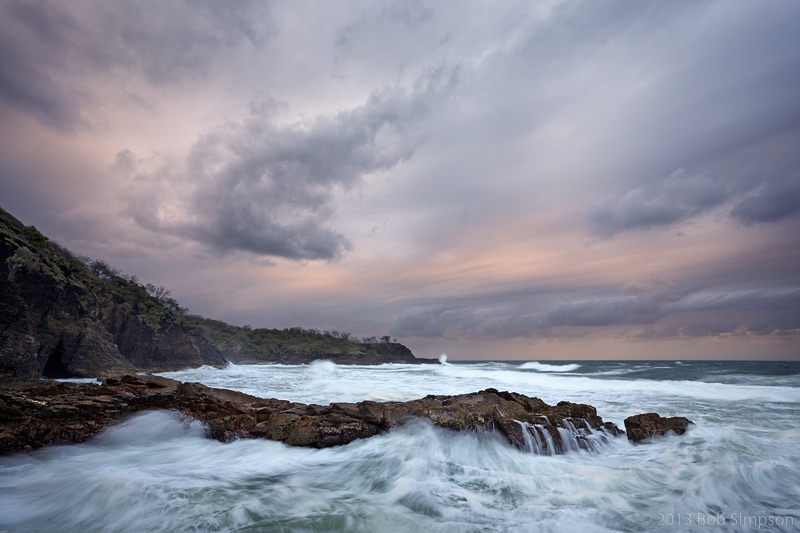 Jetties make an interesting and popular subject for landscape/seascape photographers, with long, straight lines to lead the eye, and the contrast between these lines and the softer natural appeal of sky and water. I always look for interesting angles on jetties, but I also usually capture at least one image using the more clichéd composition as seen in the first image below. I think most photographers have at least one jetty image that employs this basic, symmetrical formula....I have quite a few!....but I still like it because it works. The converging lines of the jetty give a strong impression of depth, and the simple series of triangles and rectangles that make up the composition create a balanced and appealing image. I don't do a lot of black and white images, but this one was captured with that in mind. There was very little colour in the image anyway, and conversion to black and white has simplified it further so all of the attention is drawn to the shapes and light-dark tonal distribution. I used a 5-stop neutral density filter to lengthen the exposure and ensure the water looked smooth and calm - it was pretty calm anyway, but the 20 second exposure has ironed out any ripples that were present. 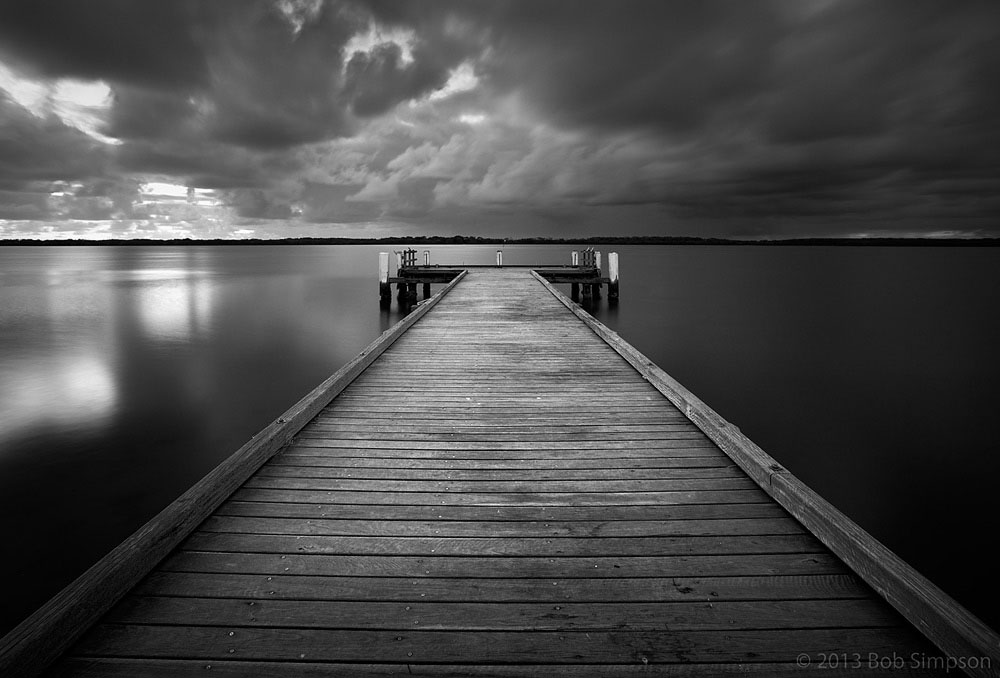 The aim of this image was to highlight the shape and textures of the jetty but also include the sunrise colours that were struggling to break through the heavy cloud cover. The pile cap in the foreground is an important part of the image, but its placement was problematic. I would have liked to place it further left in the composition, but that would have meant cutting out most of the weathered pile timber below the cap, or pushing the horizon much higher in the frame, or a bit of both - neither of which I wanted to do. So it was something of a compromise but overall I'm happy that the composition is quite strong and the elements I wanted to include are on display. I again used a 5-stop ND filter to smooth out the water. 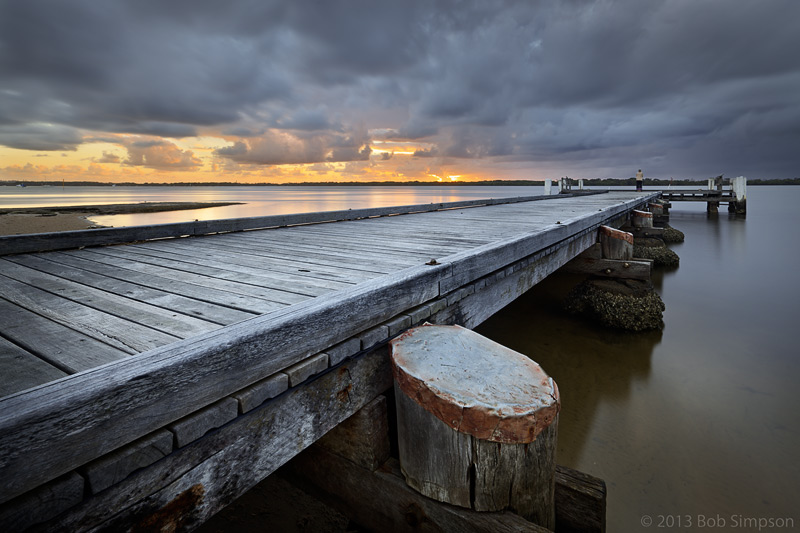 These next three images are from a morning stroll around the headland at Point Cartwright, something I always enjoy and do as often as I can. The first two are wide-angle images that highlight the shapes and textures of the rocky foreshore, and the third is a telephoto shot of an eye-catching display of light just after sunrise. 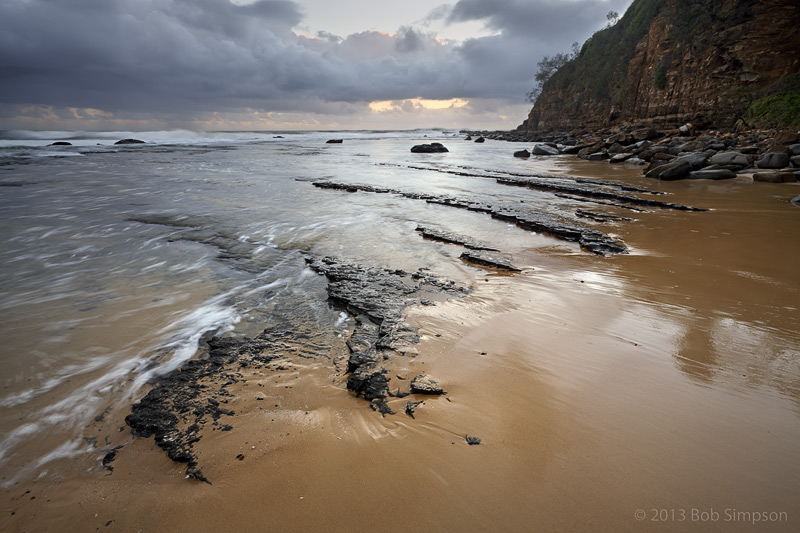 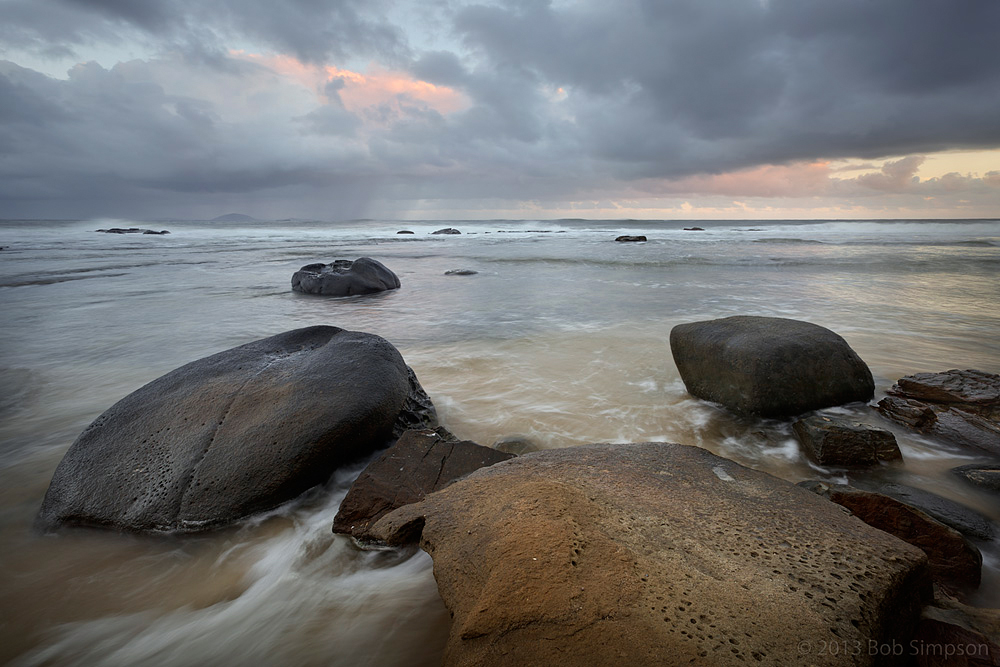 This is the long stretch of beach running south from Point Arkwright - every other time I've been there, there have been plenty of walkers and joggers out for their morning exercise on the broad sandy foreshore. This time I had it to myself! Several weeks of strong winds and swell had gouged the beach out and deposited masses of foam along the shore. My first thought when I arrived was that I was wasting my time, but once I waded through the first big raft of foam at the bottom of the access path, the going became a little easier and the photographic options began to appear.

Areas of black sand had become exposed along the beach and this contrasted strongly with the white foam (first image below). But the feature that stood out most to me was the swirling movement of floating foam with every wave. I spent a lot of time capturing these movements using different shutter-speeds, and settled on the second image below as my pick of the morning. It doesn't show the huge masses of foam captured in some of my other shots, but it feels quite dynamic to me with the water rushing under my tripod and around my legs. And the 1/8th second shutter-speed has partly frozen/partly blurred the motion just the way I like it! 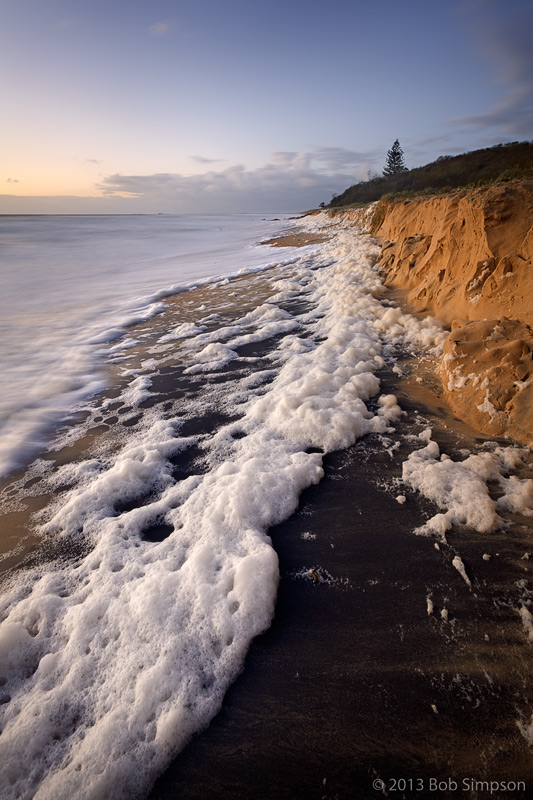 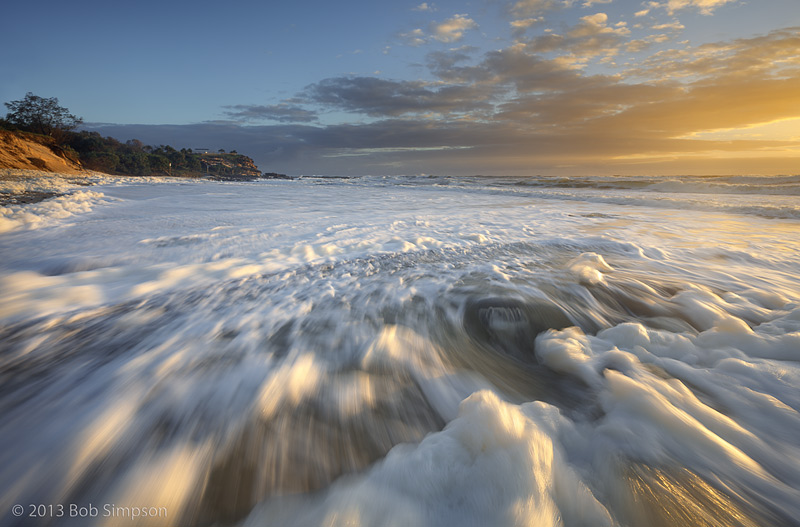 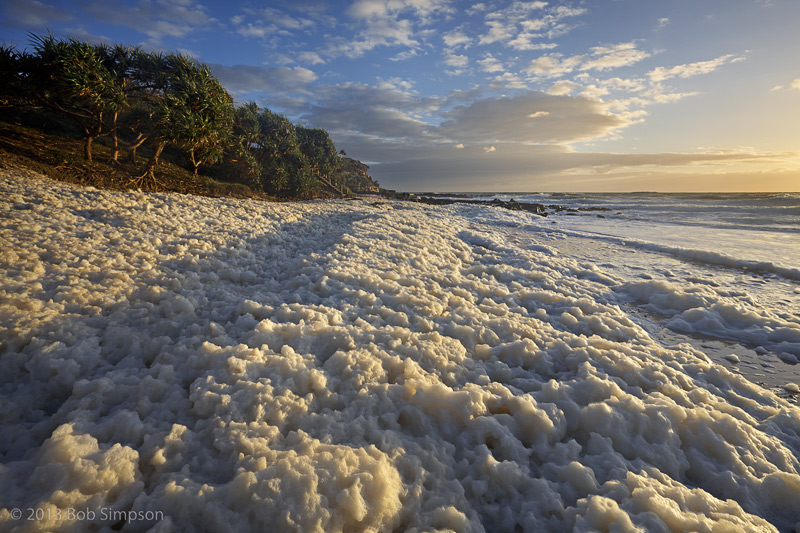 I visited Pincushion Island at the mouth of the Maroochy River twice in March. Several of my favourite images from 2012 came from this spot, and I discover something new to photograph every time I go back. In the past I've concentrated on the island itself and it's colourful layers of exposed sandstone, so this time I spent more time on the broad sand banks around the island and along the river's edge. It's easy to overlook potential images in broad flat areas like this, but a good way to get in touch with the options is to get down on hands and knees and discover the textures and patterns created by sand and wind up close. What at first appears empty and devoid of good landscape photo options is revealed as a miniature world of hills, valleys and open plains - the way we used to see it when we were kids! 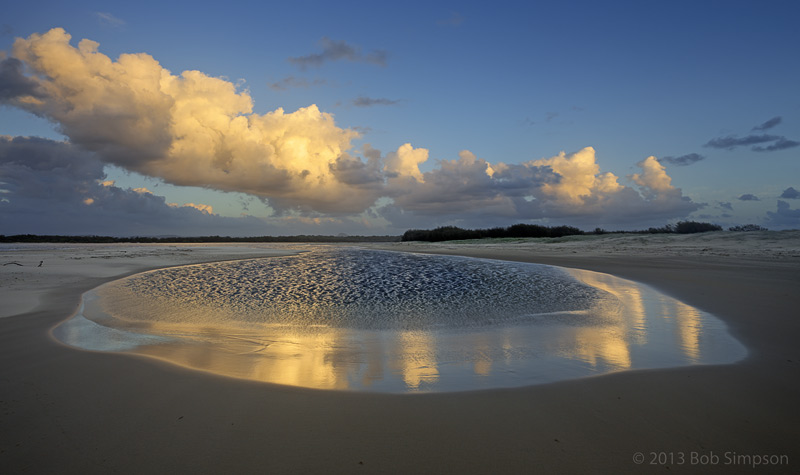 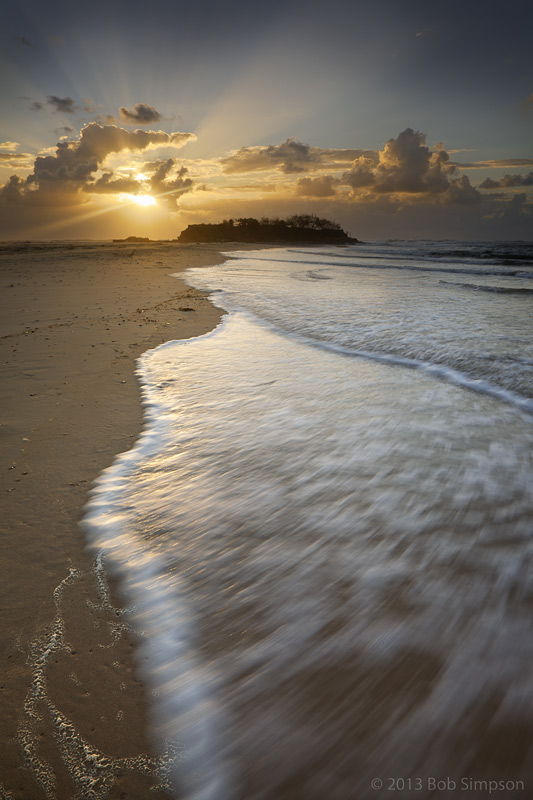 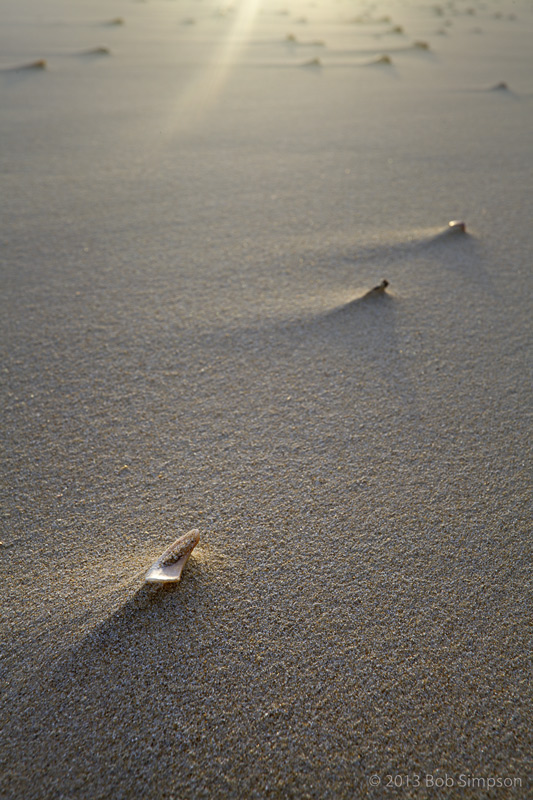 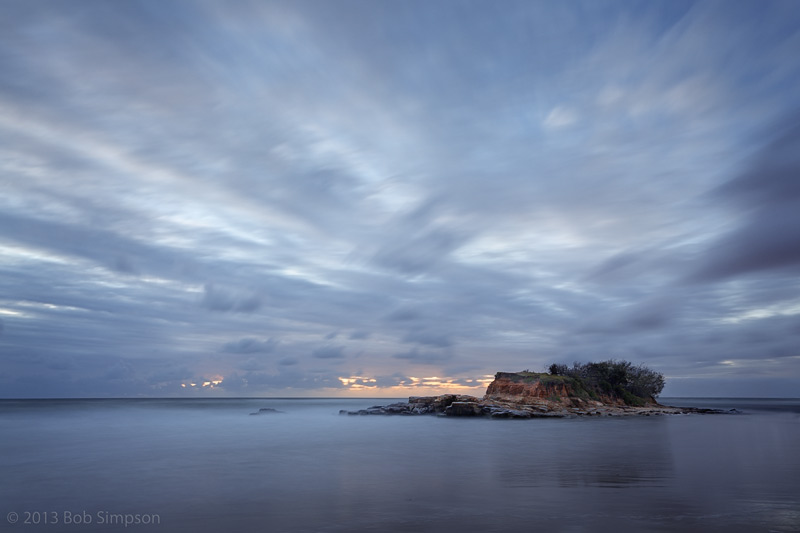 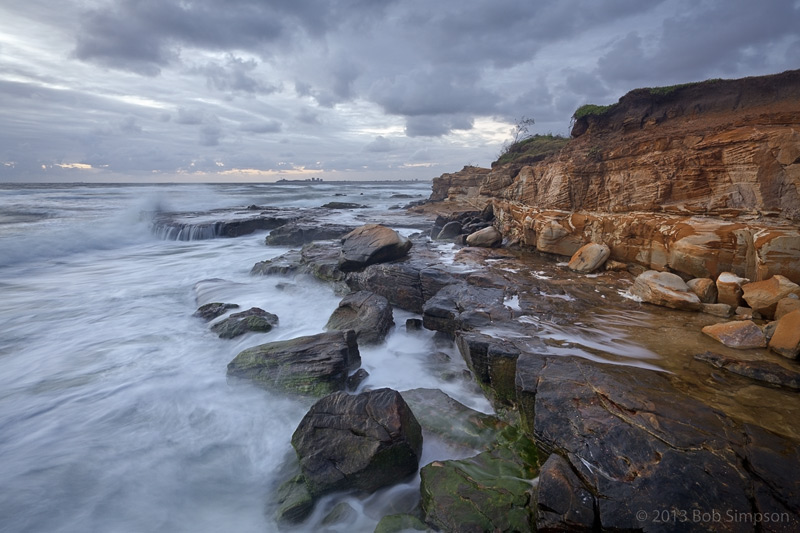 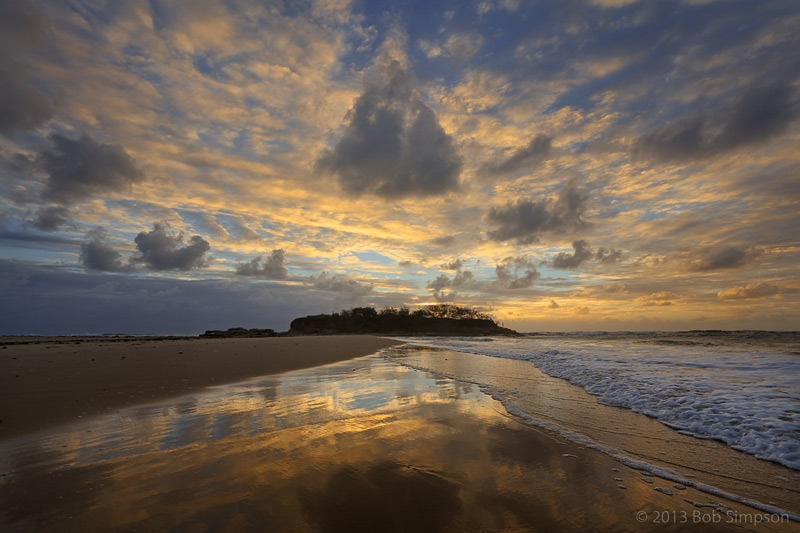 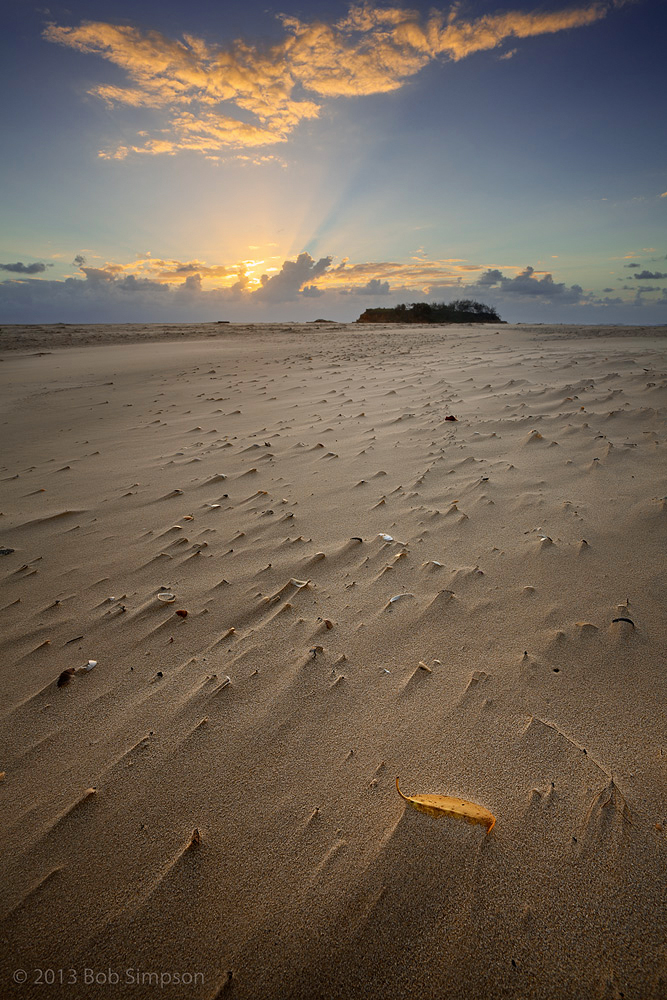 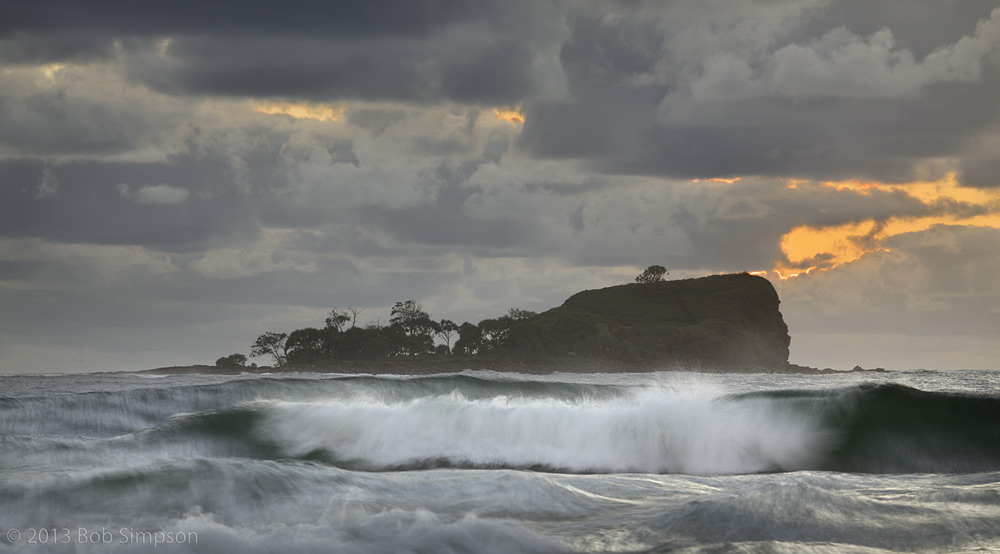