January in south-eastern Queensland is routinely a time of uncomfortably hot, humid weather and summer storms. This one just past featured some of the heaviest rain and worst flooding in living memory, courtesy of a tropical cyclone that turned into a rain depression and made its way down from the north and on into New South Wales.

Between the downpours and despite the clammy conditions, I visited and photographed some great spots on the Sunshine Coast, including a section of coastline in Noosa National Park that was new to me. Given how hot and dry the first half of the month was, I avoided travelling too far from the coast - the local creeks and rivers were suffering from a lack of summer flow and not in the best shape to be photographed. But the rain will have washed a lot of the dust away and replenished all the waterways so they will be prime photographic targets over the coming months.

So as usual, I'll run through some of my new images for the month along with a little information about how they were captured.

I visited the coastal headland section of Noosa National Park five times during the month, and I still have ideas for a couple more trips there. Wikipedia says it is the most popular national park in Australia with over one million visitors each year, which I guess is one of the reasons it hasn't been high on my 'go to' list in the past. But like anywhere, if you're prepared to get up early to catch the sunrise you will avoid the crowds - or at worst, you'll meet them heading out to one of the beaches or lookouts as you make your way back to the car with a card-full of new images under your belt.

Earlier in the month, I caught a sunrise on the beach at Granite Bay in the northern section of Noosa Headland. I planned the trip to coincide with a morning high tide to try and get some images of waves washing through the boulders - I guess I achieved that, but the surf was bigger than I'd hoped and it was pretty difficult to judge how high up the beach each wave would get. So I probably didn't quite get the image I was after, but on the other hand, I came away with some unexpected results that I'm quite happy with. 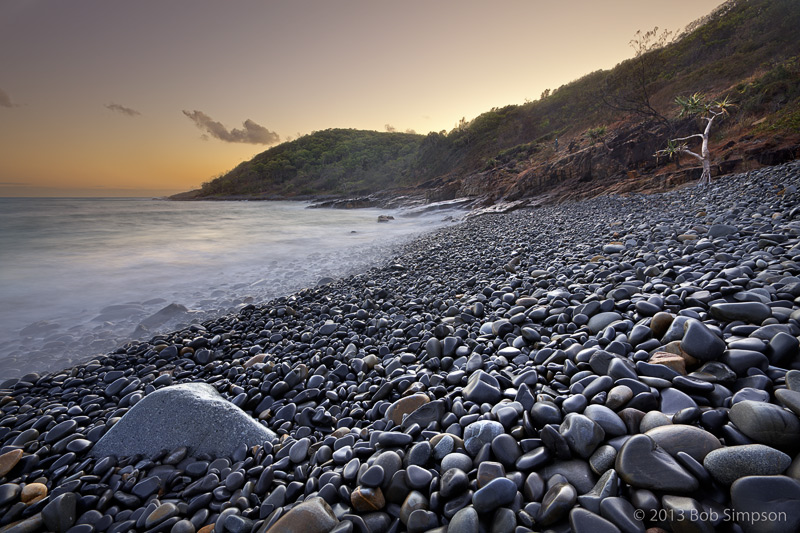 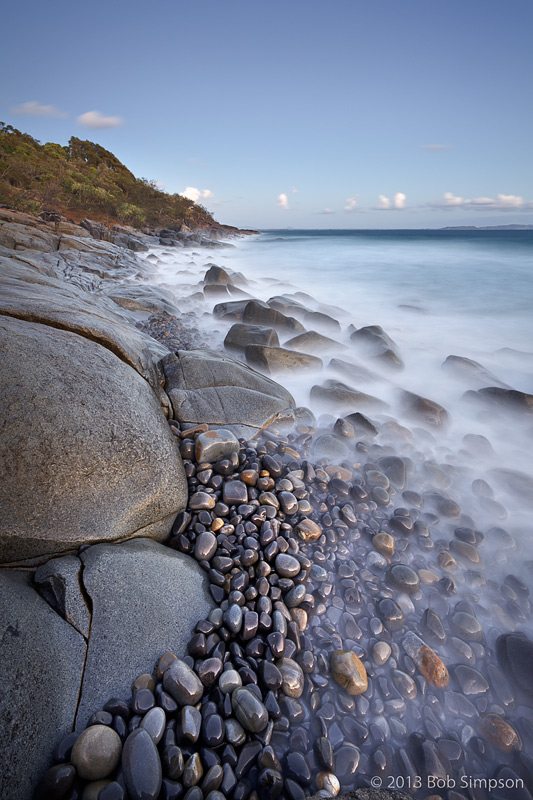 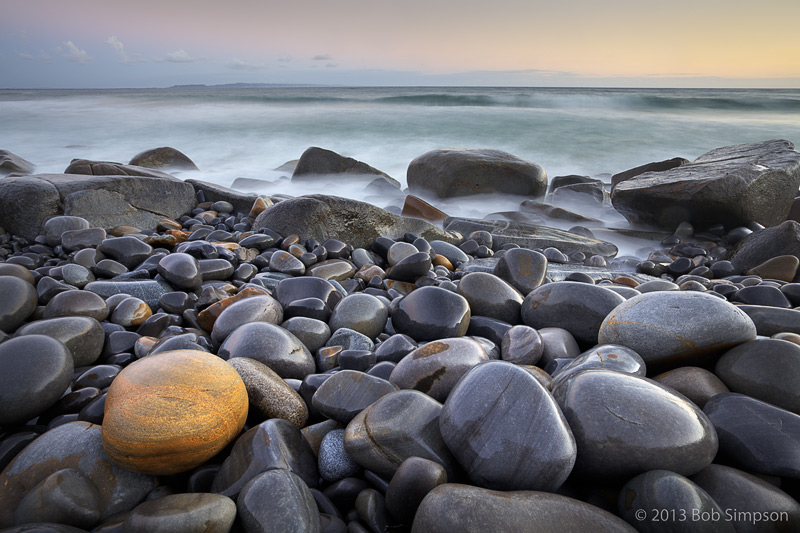 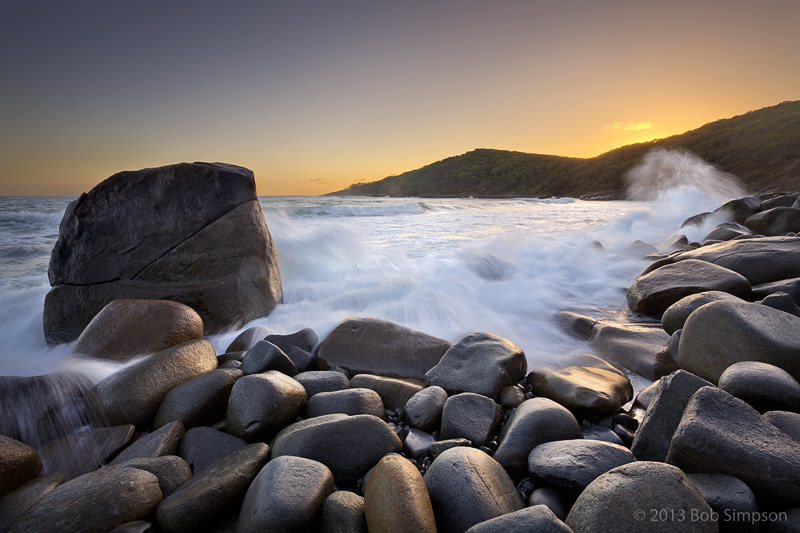 The southern area of Noosa headland around Lion Rock and the Devil's Kitchen is new territory for me. From Sunshine Beach, it's a short but steep walk up into the National Park and to some great views down over the rugged coastline. It's also reasonably easy to make your way down to the rocky shore in several places, and then on to the long expanse of beach at Alexandria Bay.

Of the four visits to this area I made during January, three were in overcast, rainy conditions and only one produced any sunrise colour in the sky. It's nearly impossible to predict the photographic conditions when you're planning a trip like this - the fact that it might be raining when you leave home, or even when you arrive at a location, doesn't mean you won't get gaps in the clouds that allow a dazzling display of sunrise colour to develop. Some of the best sunrises I've photographed have been on rainy mornings.
But in this case, 3 of my 4 visits were just plain grey and wet! But these conditions also created a brooding atmosphere that suited the rugged scenery and produced some images that I think captured the wild feel of the area. That doesn't mean I wouldn't like to go back in clear conditions and photograph the area under a pretty pink sunrise....that is definitely on my agenda....but the rain certainly didn't make any of the trips a waste of time. 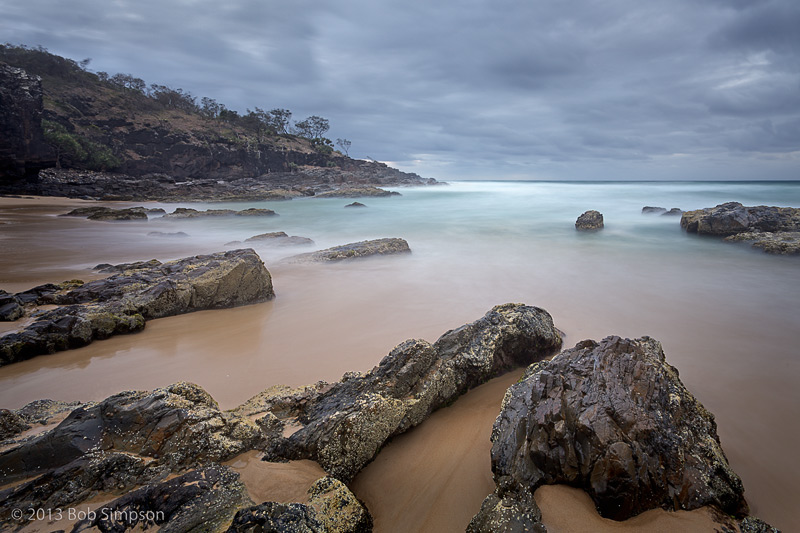 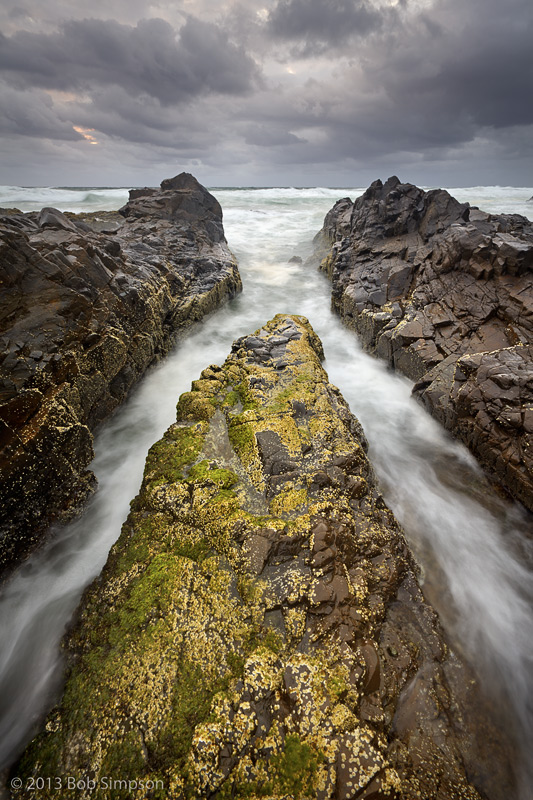 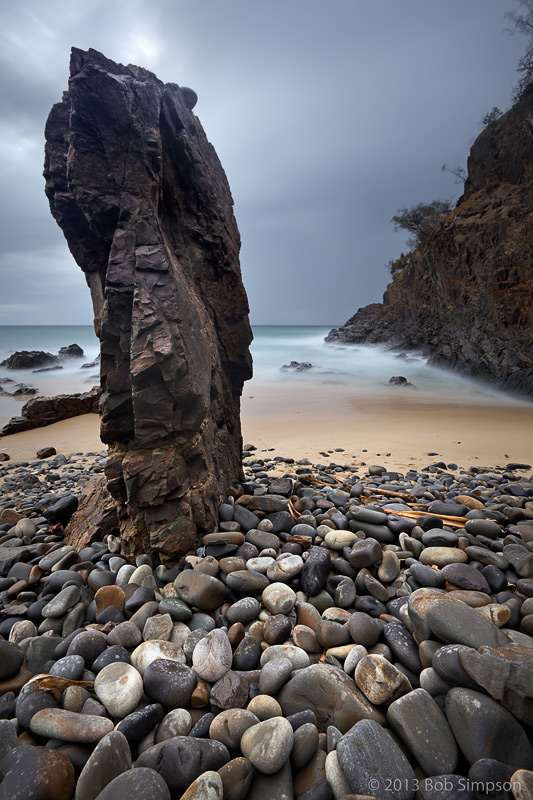 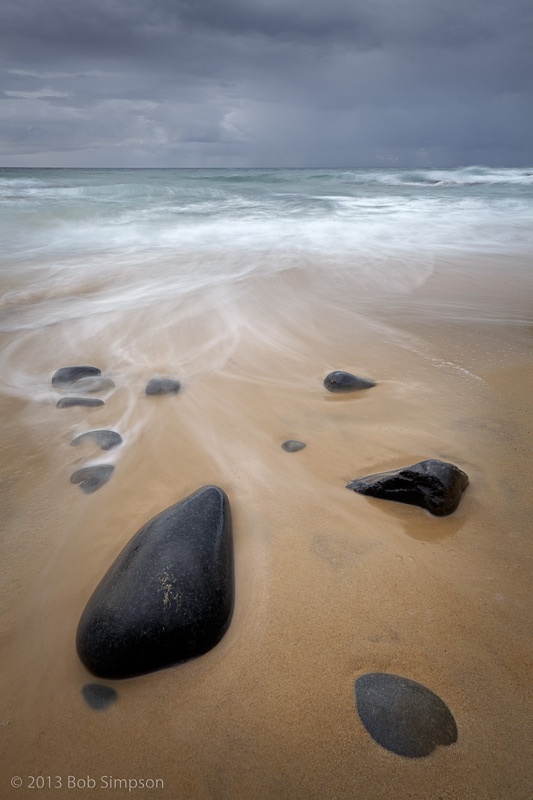 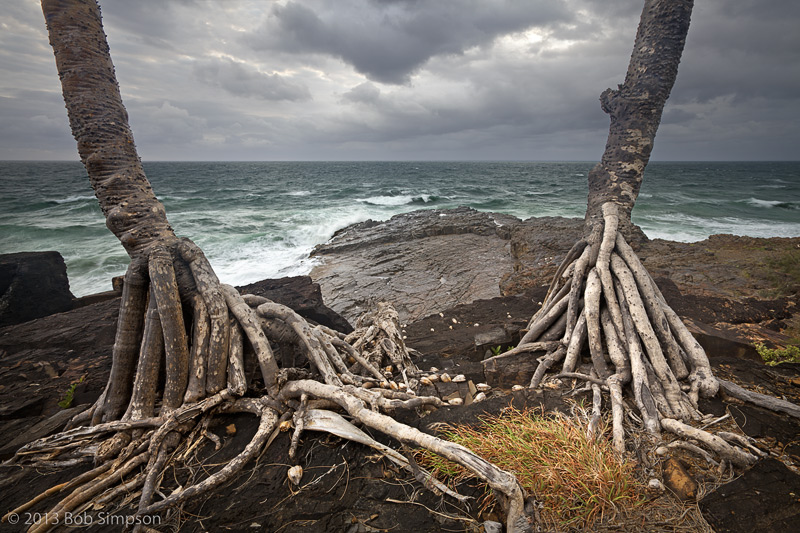 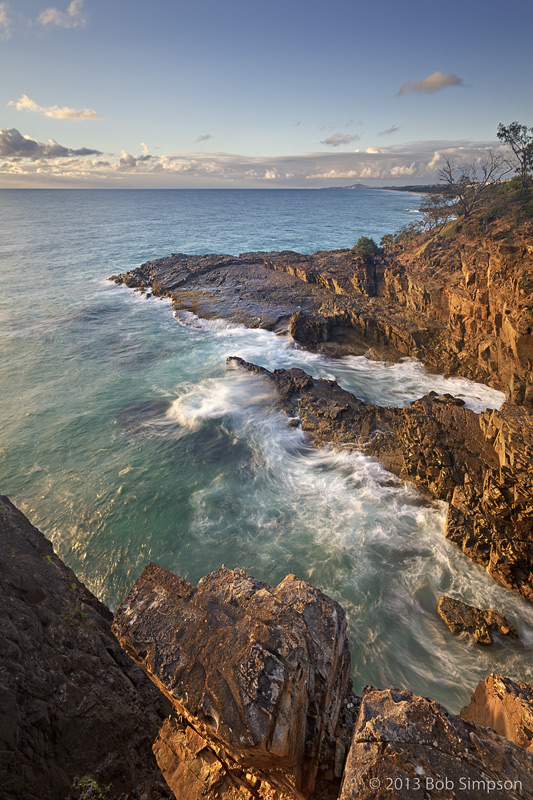 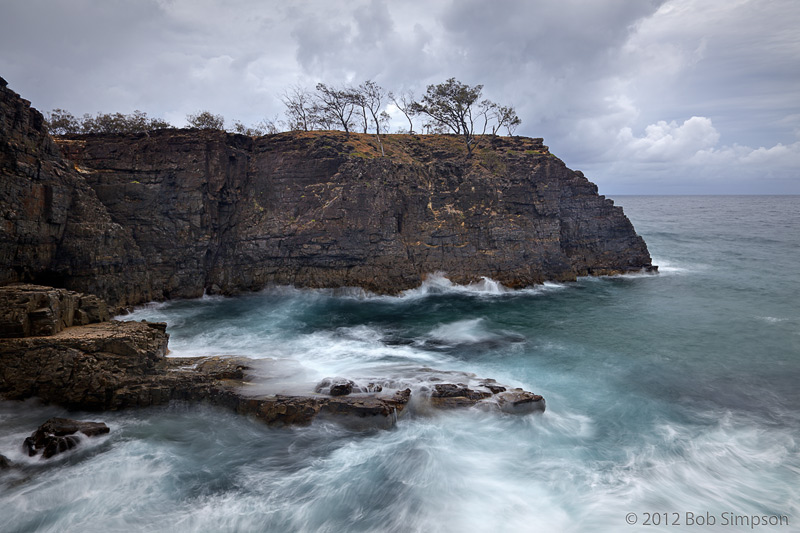 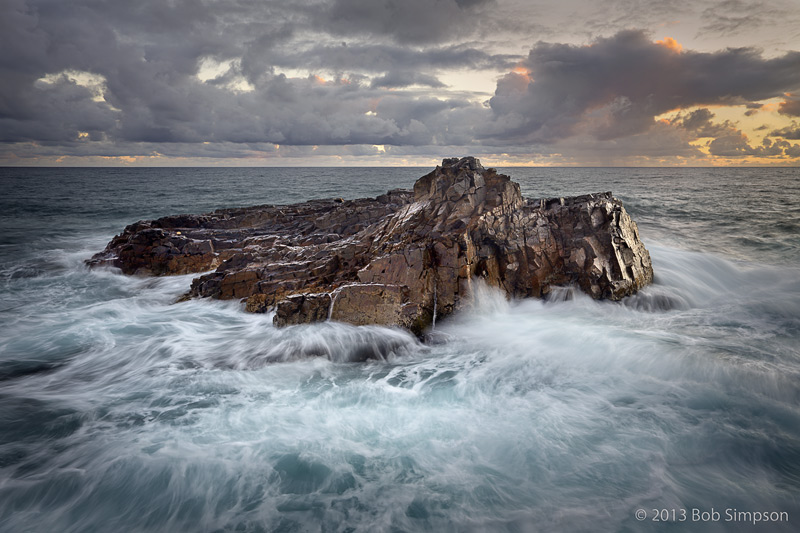 This is a spot I've been to many times over the years. My Dad used to love going fishing there, and I go back regularly with my camera to take advantage of the smooth sand and views over Moreton Bay. This time, I accompanied local photographer, Barbara Burkhardt, on a sunrise session along the empty beach. Barbara captured this image of me crouched behind my tripod just after sunrise...nice timing with the gull flying by Barb! 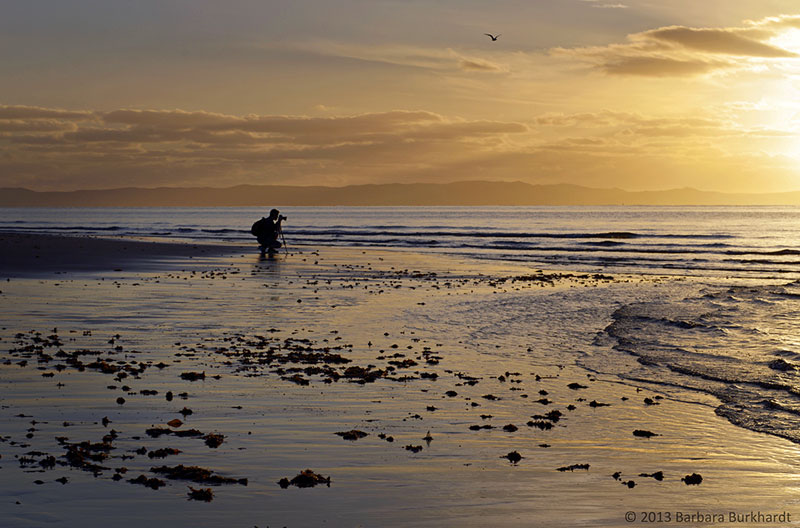 It's always worth looking out for patterns in the sand along calm beaches like this, especially at low tide. These patterns (below) seemed to mirror the wispy morning clouds in this composition....the reflections of the clouds on the sand were a bonus, but in retrospect I wonder if they are almost redundant in this case. In some ways they confuse the foreground to my eye - the ripples in the sand alone were probably enough to make a strong but simple composition. But it's hard to turn down a nice reflection like this when it's offered to you! 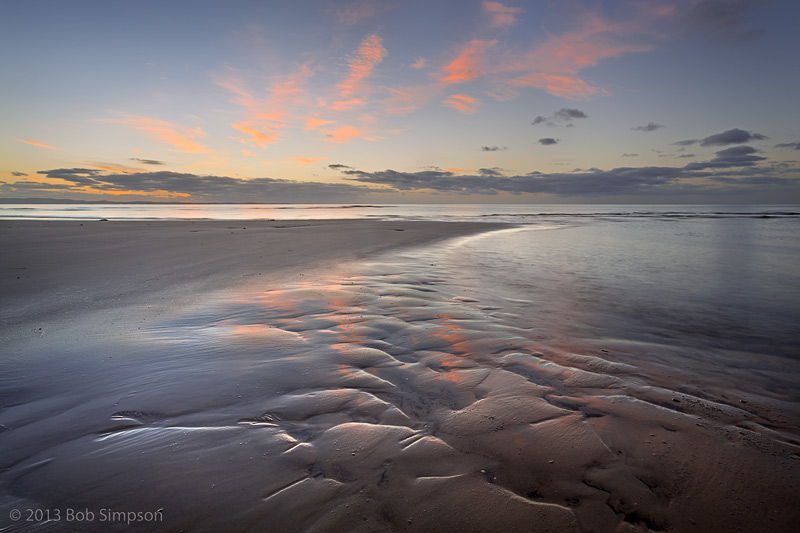 I love using a wide angle lens for landscape photography - most of the images on this page were taken at 17-24mm - but one situation where I regularly reach for a longer lens is when the sun is low in the sky and I want to zero in on the interplay between the strong light and clouds. While this situation can make a pleasing backdrop for wide angle images, the detailed patterns are often lost unless you zoom right in to exclude the wider view. You have to be careful with exposure to avoid ugly areas of burnt out sky and it's usually best if you can time it so the sun is mostly obscured by the clouds. But it's something I always try to remember to look out for and it only takes a few seconds to make a quick lens change.

The next two images feature pieces of the green seaweed, Codium fragile, or dead man's fingers, washed up on the beach. This seaweed is commonly found attached to rocks, so it has travelled a fair distance on the currents to reach Red Beach. The piece of weed in the first image, as another photographer pointed out to me, looks a lot like the native American fertility deity, Kokopelli - you can Google it to see what I mean. 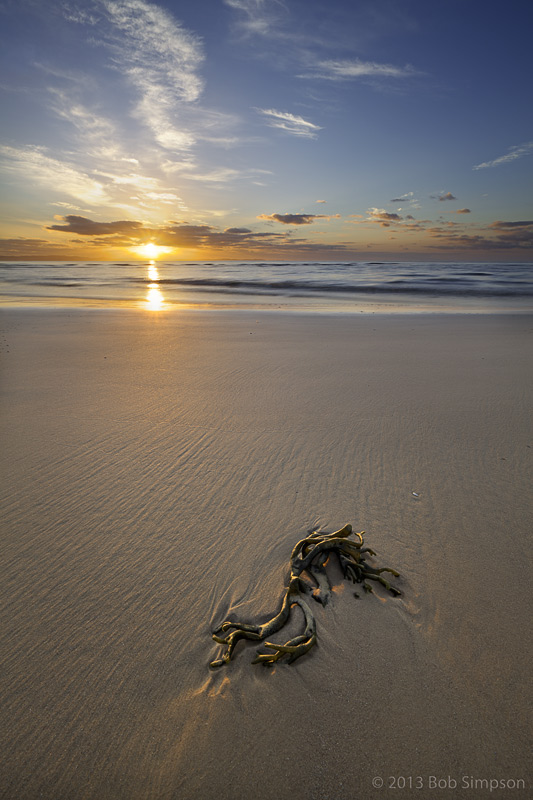 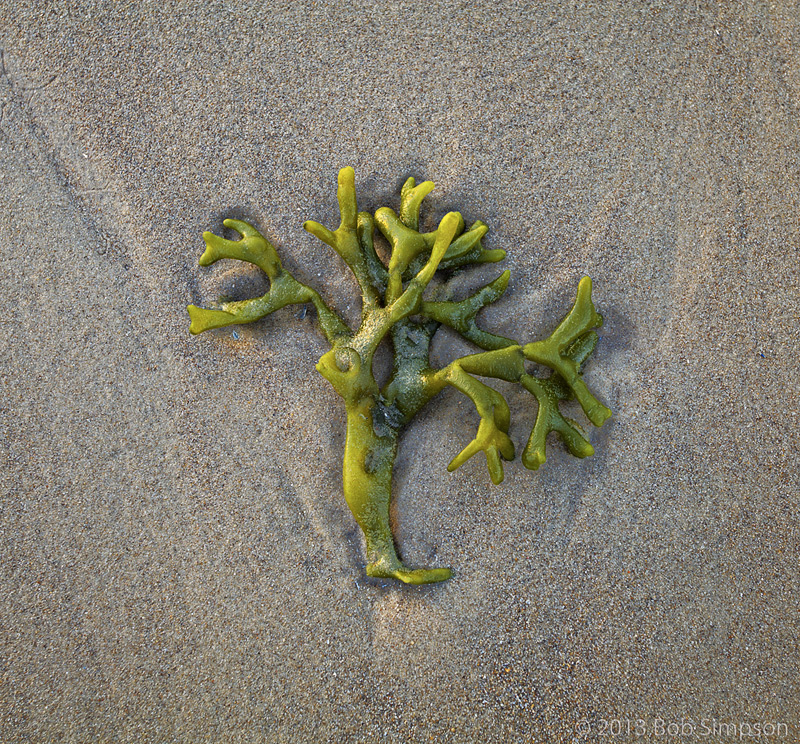 The tall paperbarks that line Red Beach foredune always look great when they catch the early morning sunlight, especially so when they are standing out against a deep blue sky. 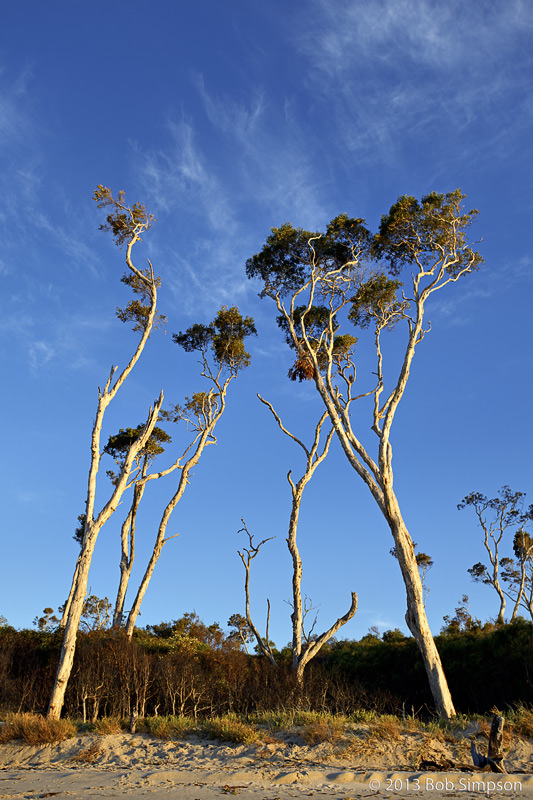 Another regular hunting ground for sunrise images, Moffat Head has some great patterns and shapes in the rocks, and nice wide rock platforms that make it easy (if a little slippery) to get around. You always have to be careful around wave-prone shores, especially when the tide is rising, but if you can time it so the waves are washing up onto the platform without too much force it's possible to capture some interesting water movement effects by paying attention to your shutter speed. I usually find that a shutter speed between about 1 second and 1/10th second produces the effect I like, as in the second and third images below. The only price I payed was getting wet up to my knees. 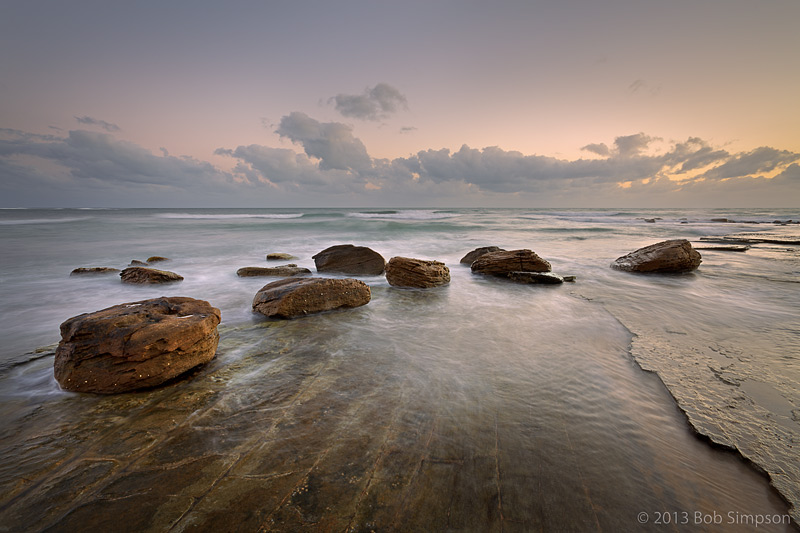 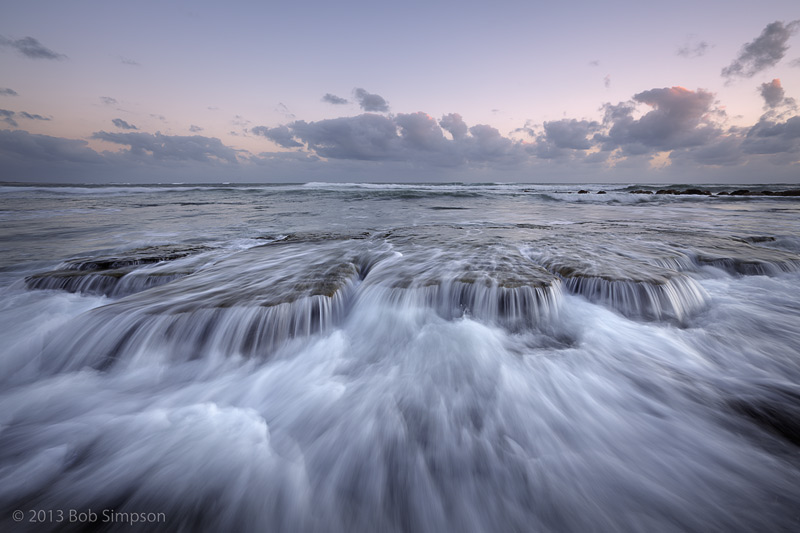 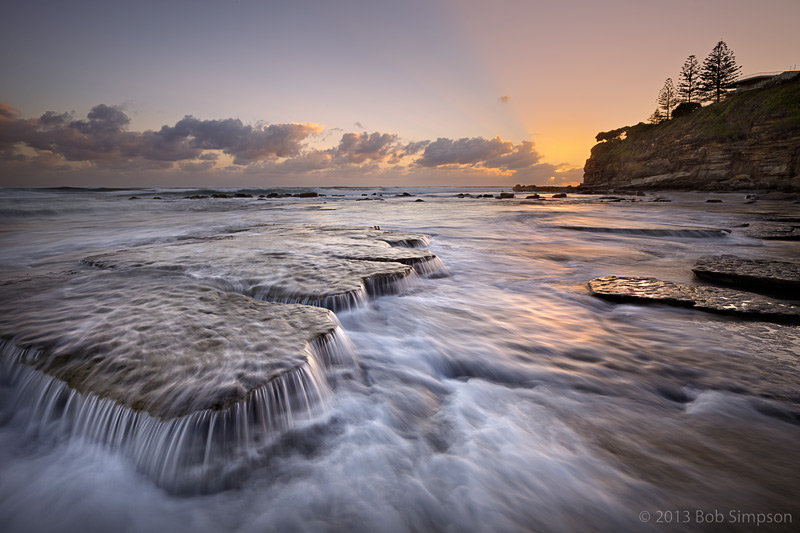 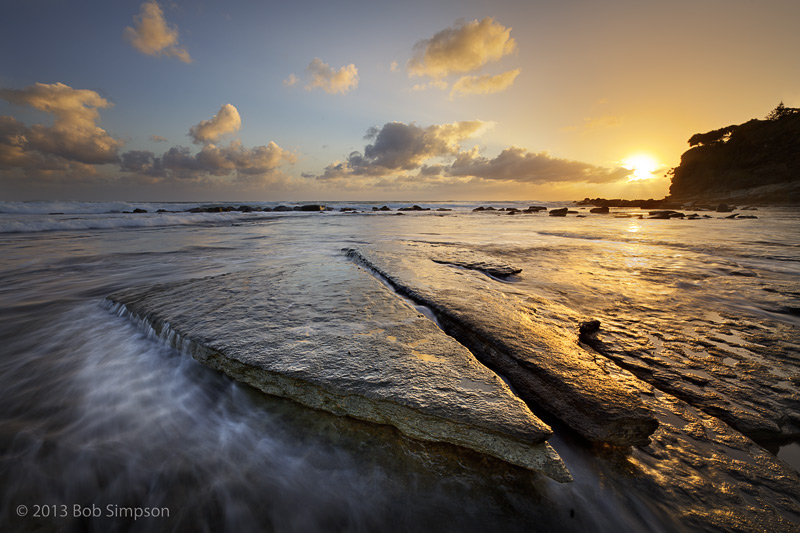 This little outcrop of rock sits at the mouth of the Maroochy River - I hadn't been there with the tide quite so low before, so I wandered out on the barnacle-covered rocks as far as I could to get a different perspective to those I'd photographed before. Not long after I arrived, another photographer turned up and set up his tripod on the rock platform up near the highest part of the island. I was probably standing where he wanted to photograph (as he was for me in some other images) so after capturing the image below and several others, I wandered back out of his line of sight to give him a person-free scene to photograph. As a consolation, I used him as a subject in the bottom image - he made a nice strong silhouette against the rising sun and added a human element to the scene. 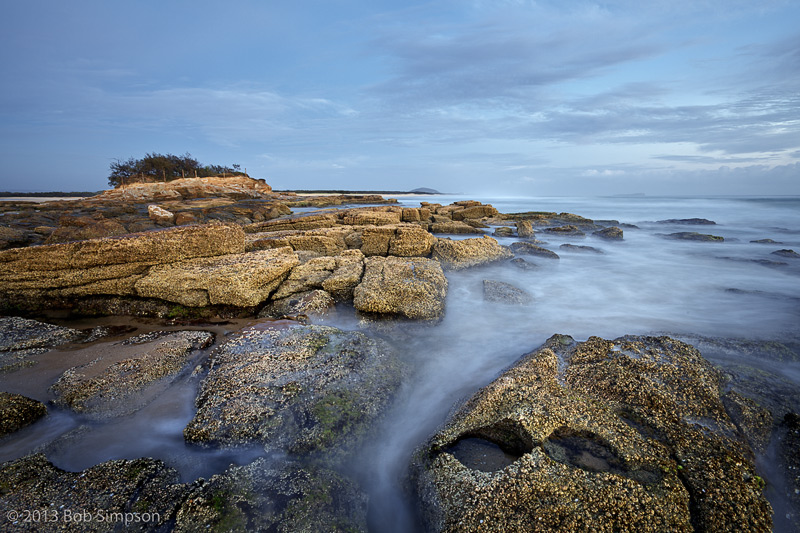 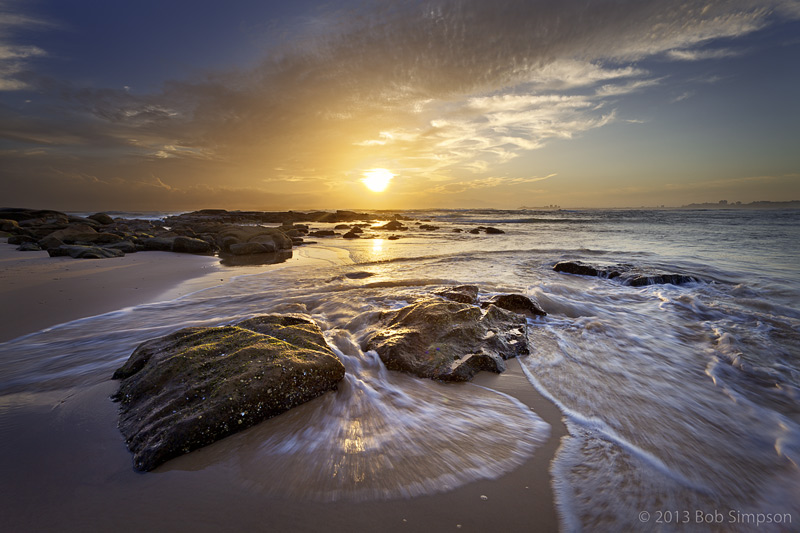 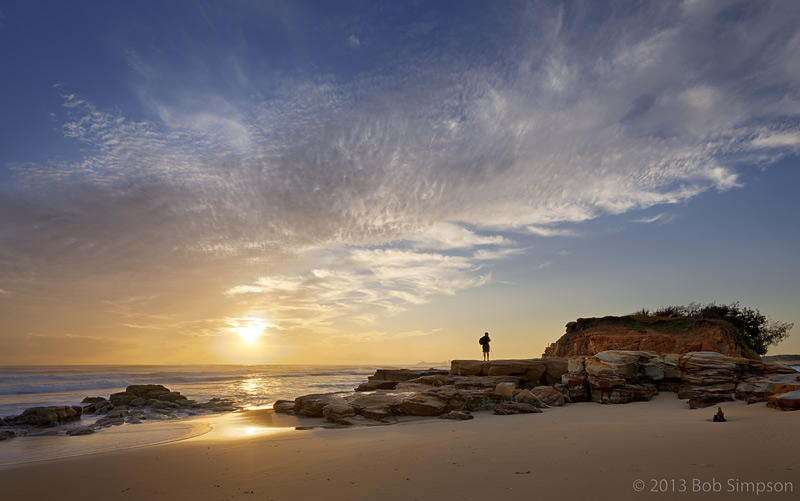