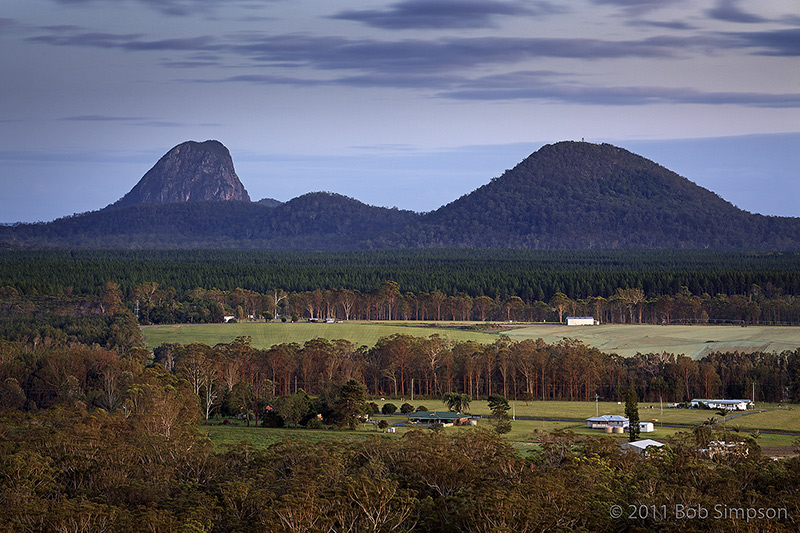 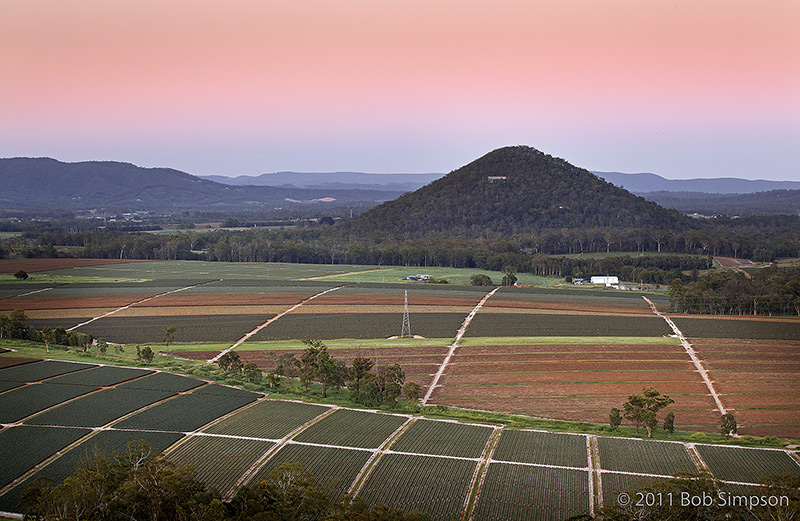 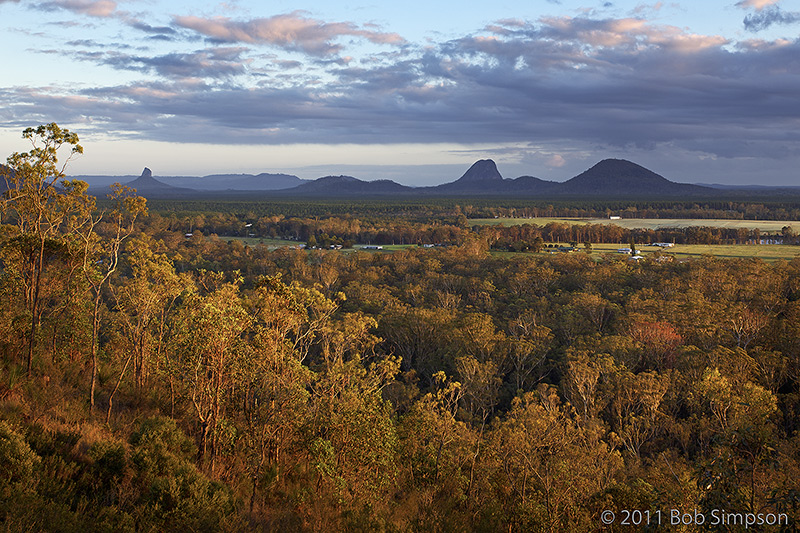 Buckleys Hole is a shallow, ponded wetland sitting just behind the beach along the south western shore of Bribie Island. It’s probably best known as an important site for wading shore birds, including migratory species, but the reed beds and surrounding woodlands are also home to a range of other native animals including rare birds and frogs. The 88 hectare Buckleys Hole Conservation Park protects the natural values of this fragile little ecosystem, and provides visitors with an opportunity to view the bird life from a public bird hide or take a walk around the northern edge of the pond to the beach.

I wanted to get to the south-western corner of the pond so I could photograph across the water towards the rising sun. This meant a short walk along the beach from the car park, and then a scramble over the low dunes towards the lake edge. Sounds easy, but the tangled mass of head-high rushes and weeds around the lake make it anything but, and the craftily spun and well hidden spider webs among the reeds only add to the discomfort.

So sporting scratches on my bare arms and strands of web all over my face, I finally made it to the last line of reeds – of course the reeds grow right out into the water so I was already up to my knees in soft mud and water. The sky was already starting to glow red as I pushed my tripod legs down into the mud and framed the first image (below). 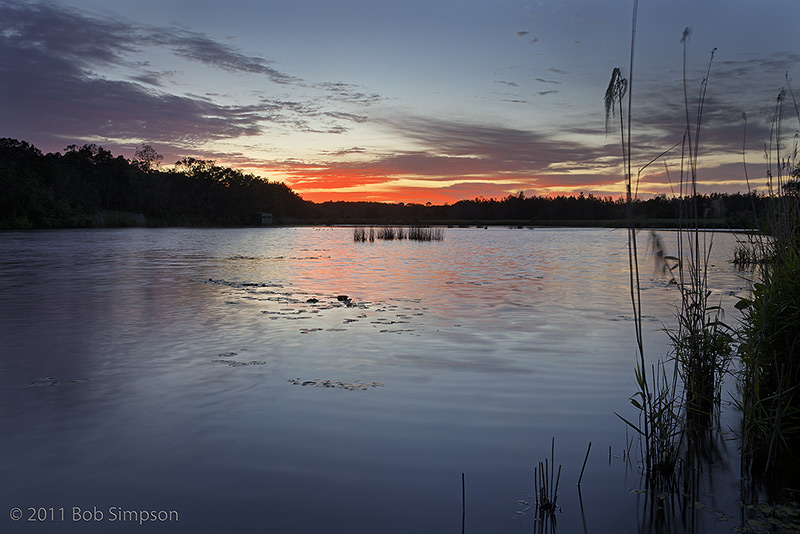 There’s no easy way of making your way around the edge of the pond unless you’re prepared to get wet up to your armpits (which I wasn’t), so I tried to find interesting compositions where I was. I managed to edge out into the water a little further so I could use some lily pads as foreground interest while the sky was still glowing red (below) - but then the colour quickly faded as the rising sun burnt out the highlights in the sky and made it difficult to get a good exposure from where I was standing. 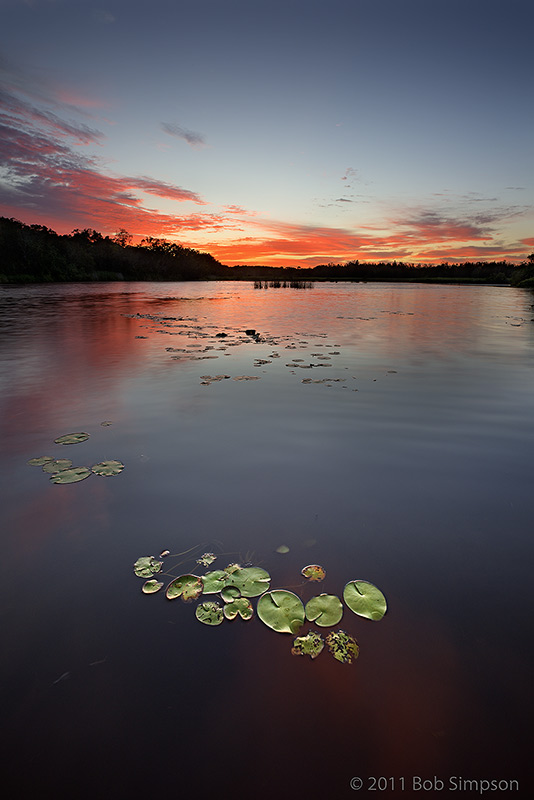 Back on the beach, I spent half an hour or so looking for patterns in the sand and water while the sun was still low in the sky. This is a great time of day to photograph these patterns when the low angle of the light accentuates even the most subtle of patterns, and the golden glow of a morning sky provides a lovely backdrop. 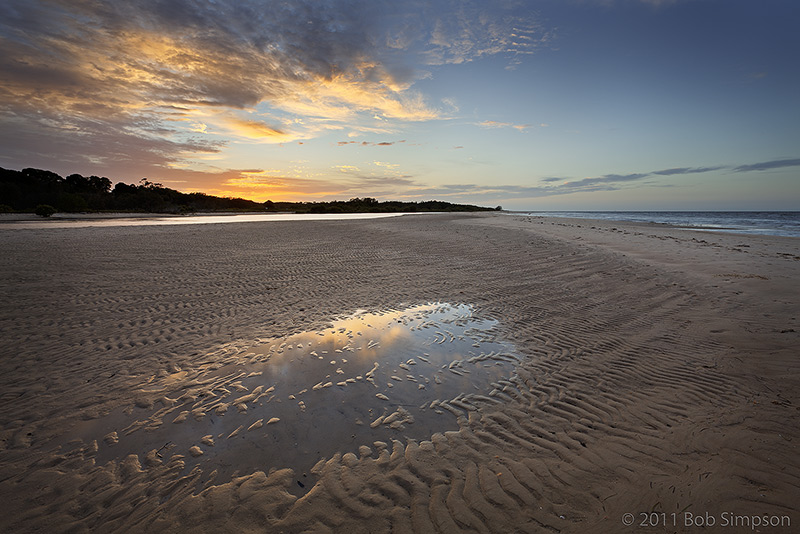 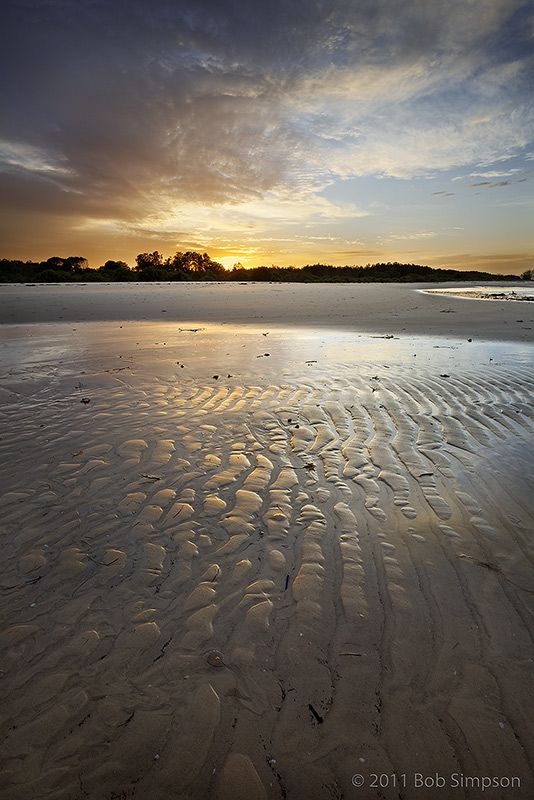 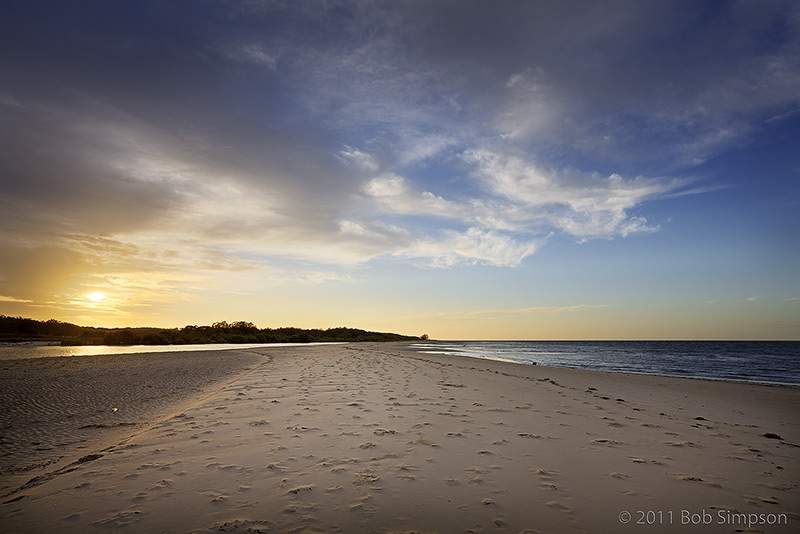 By 6am the best of the light had passed and I headed back to the car. 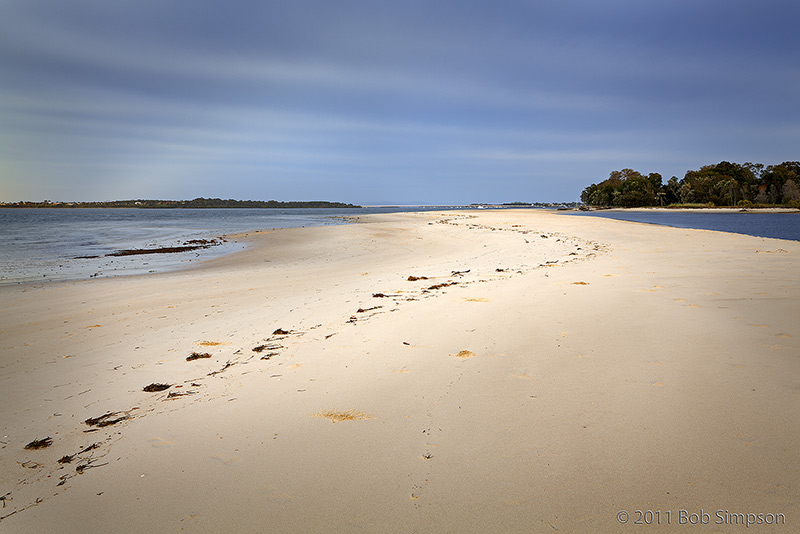 The Glass House Mountains have been photographed thousands of times so it can be hard to come up with a new and original perspective. I found this view of Mount Tibrogargan on a dirt road between pineapple farms a few weeks back and thought it might make for some worthwhile images early in the morning with the rising sun hitting the rock face. I arrived at my chosen spot at 4:30am and set up my tripod right on the corner of the pineapple field - there would have been some good alternative views if I'd wandered through the pineapple field, but I wasn't about to do that without talking to the the farmer first - maybe next time. A few puffy clouds added some interest to the sky, and the soft light of early morning brought out the contrasting colours of pineapple fields at different stages of maturity.

The first image below was taken at 4:31am, around 15 minutes before sunrise. I needed a 30 second exposure at f16 and ISO200 to light the pineapple plants in the foreground - the long exposure also allowed just a little movement in the clouds to give that slightly streaky look. 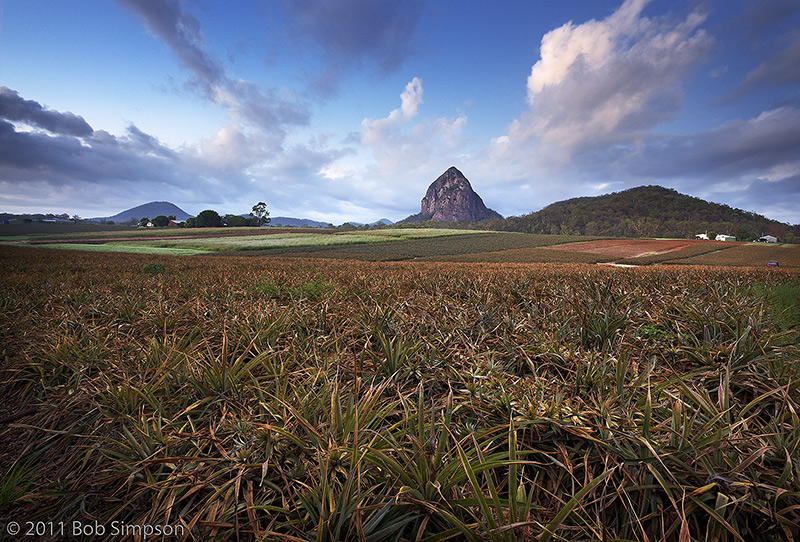 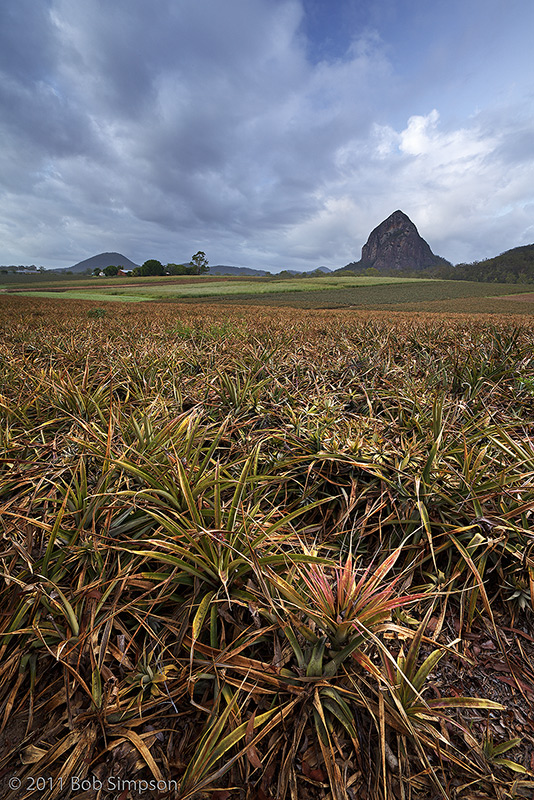 Once the sun started to come up I added a polarising filter to darken the blue in the sky and help the clouds to stand out. 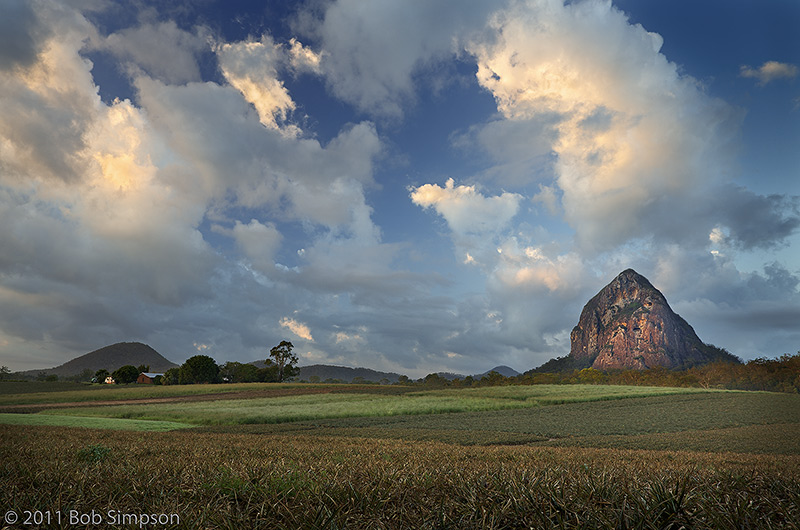 The low angle of the sun caught the face of Tibrogargan well before it lit the surrounding landscape. The image below was taken at 5:16am with a 70-200mm zoom set at 70mm and a polarising filter attached. 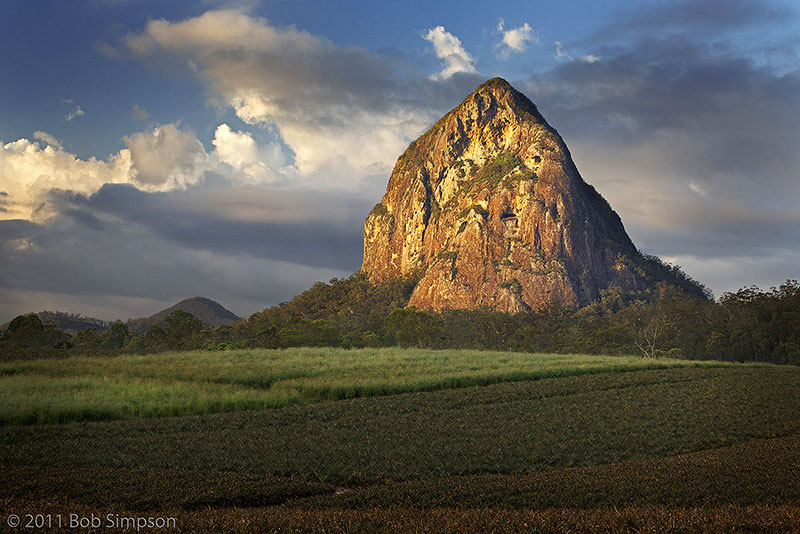 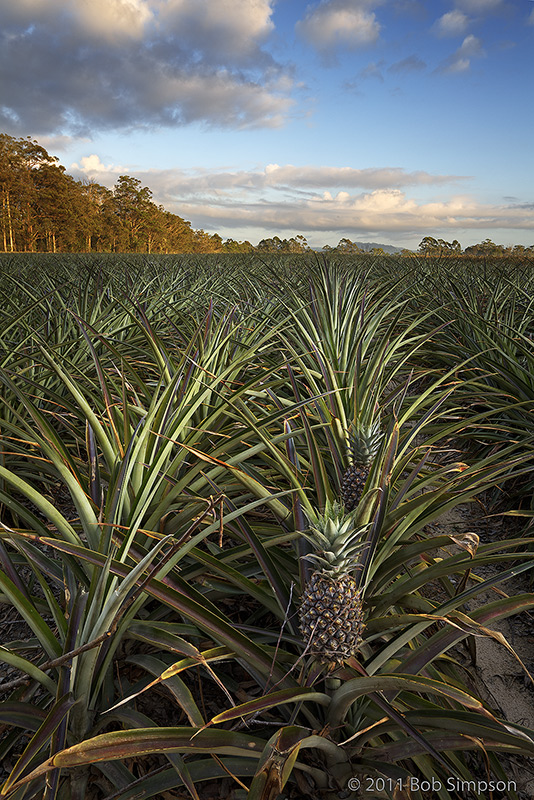