The Toorbul foreshore is an excellent place to photograph sunrise reflections. The shoreline faces to the east, the waters of Pumicestone Passage are usually very still early in the morning, and there are often boats moored just offshore if you want to include them in your composition. 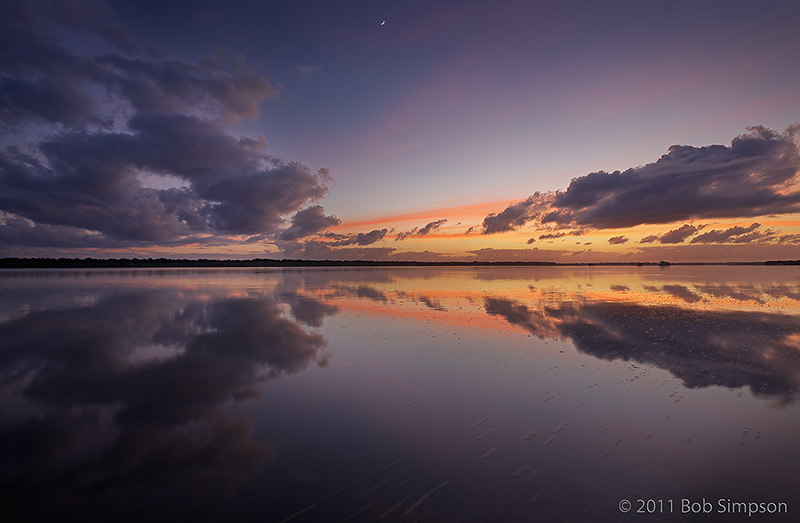 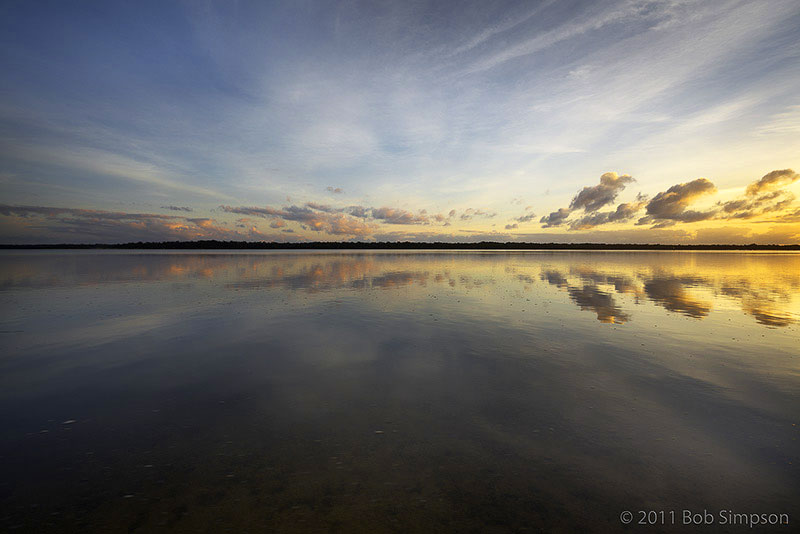 A composition based around a reflection is one of the few cases where I think it works to place the horizon line in the middle of the frame. Conventional wisdom in landscape photography is to offset the horizon line either above or below the middle of the frame, depending on whether you want to draw attention to the foreground or the sky. A symmetrical composition, as in the two images above, can give the landscape an abstract feel - the strength of the image comes from the mirrored colours and shapes rather than typical landscape elements like trees and mountains. Images like this remind me of the pictures kids create in pre-school by daubing paint on a piece of paper and then folding it in half. 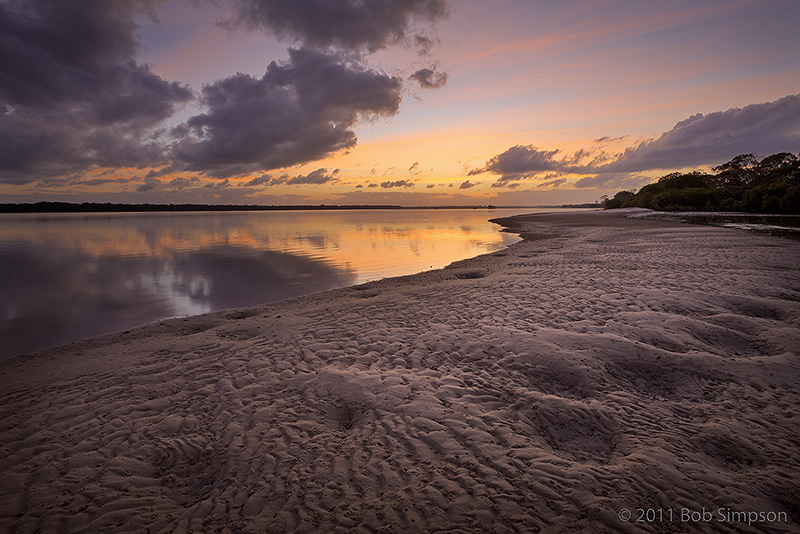 Patterns in the sand are accentuated by the low angle of the light around sunrise and sunset – just remember to think about where you’re stepping so you don’t leave a trail of footprints through the middle of a scene you might want to photograph. 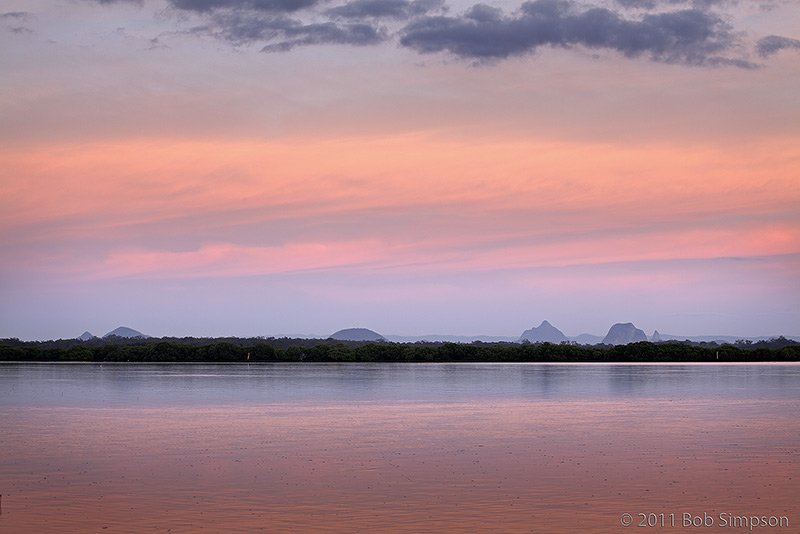 This pink glow over the Glass House Mountains lasted only a couple of minutes just as the sun peeked over the horizon behind me. 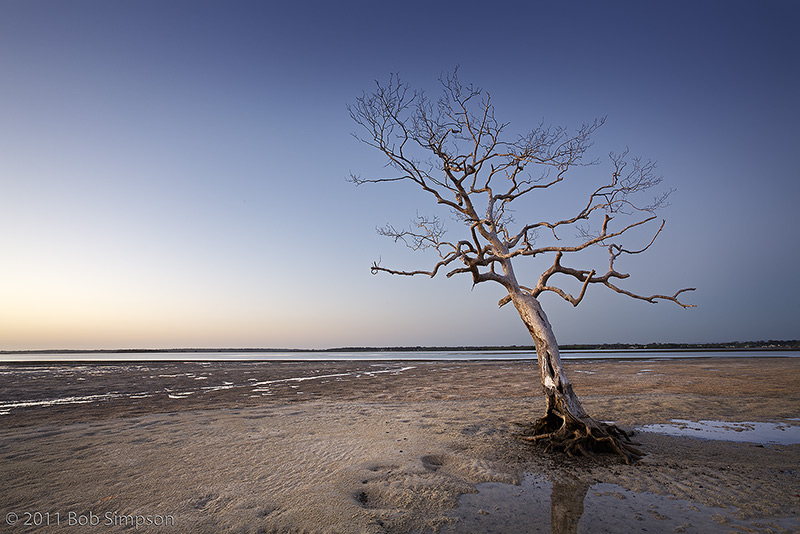 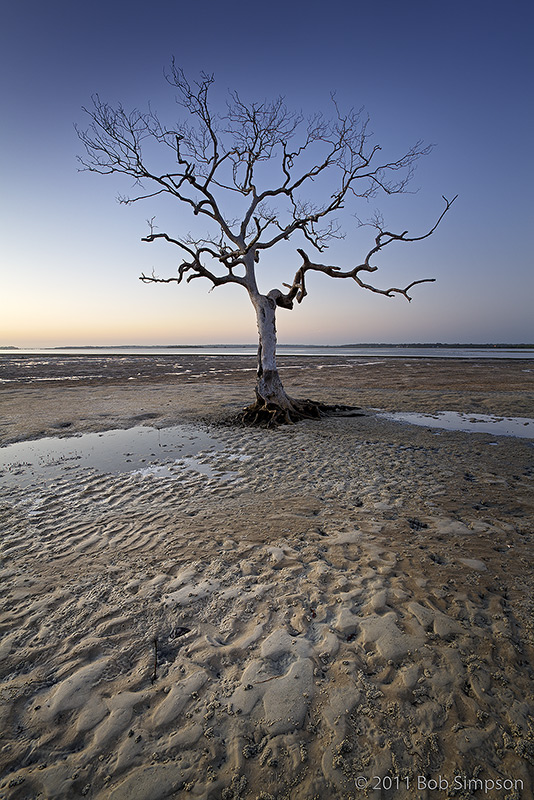 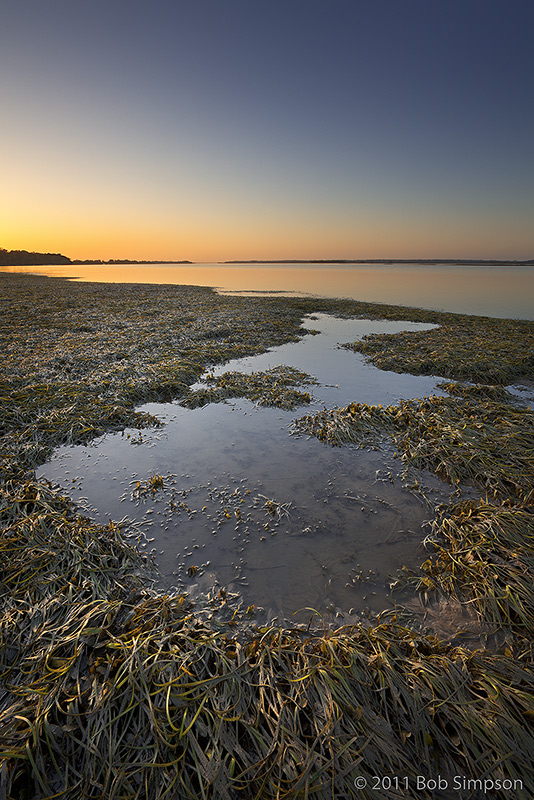 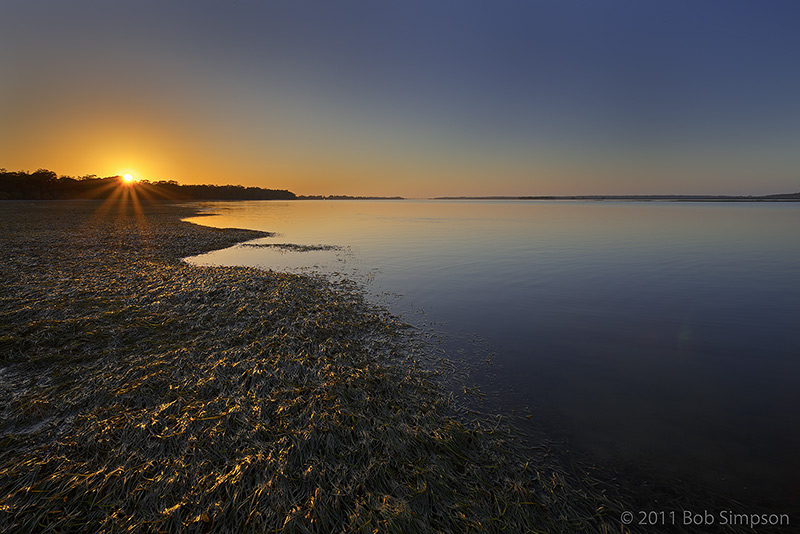 My dictionary describes a Donnybrook as a "scene of uproar", and apparently that is how this quiet little town on the shores of Pumicestone Passage gained its name. Back in the 1880s, the Moreton Bay Oyster Company set up a depot here to receive oysters from the rough and ready crew of oyster gatherers/farmers that eked out a living from the rich beds in the area. The settlement was first known as Little Caloundra, but soon took on the local name of Donnybrook because of the brawls that often erupted between the oyster men, timbergetters and fishermen.

Or so the story goes! It's a little hard to imagine when you see what a quiet and peaceful place Donnybrook is today. It's a favourite access spot for anglers to launch their tinnies and chase a feed of fish or crabs in the quiet, protected waters of the passage. And while there isn't a lot of access to the muddy foreshore, it's a pleasant spot to spend a couple of quiet hours with your camera, and then maybe head to the General Store for some well earned fish and chips. 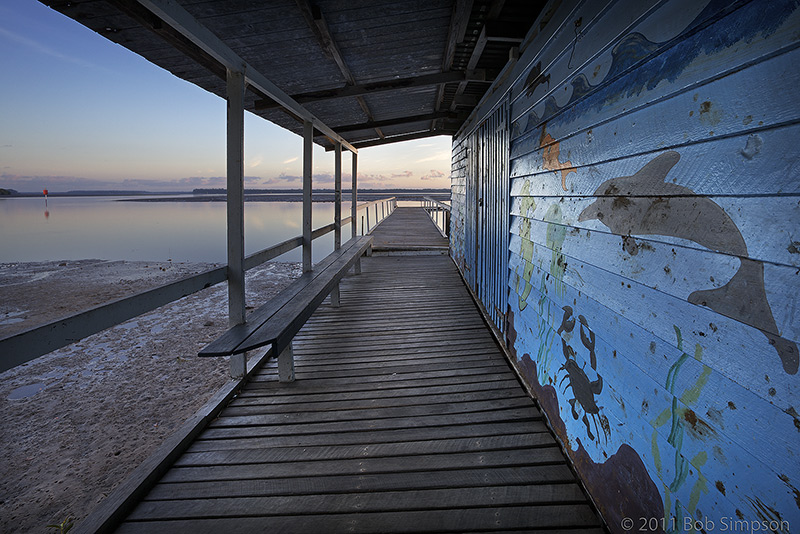 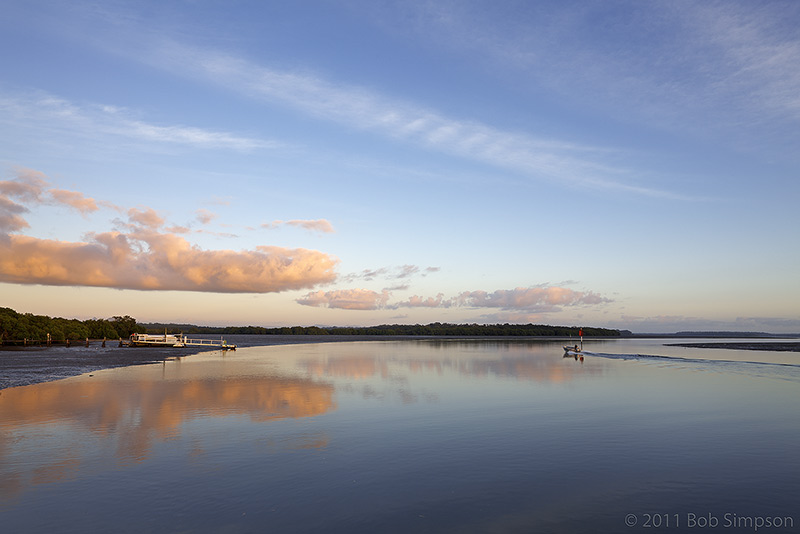 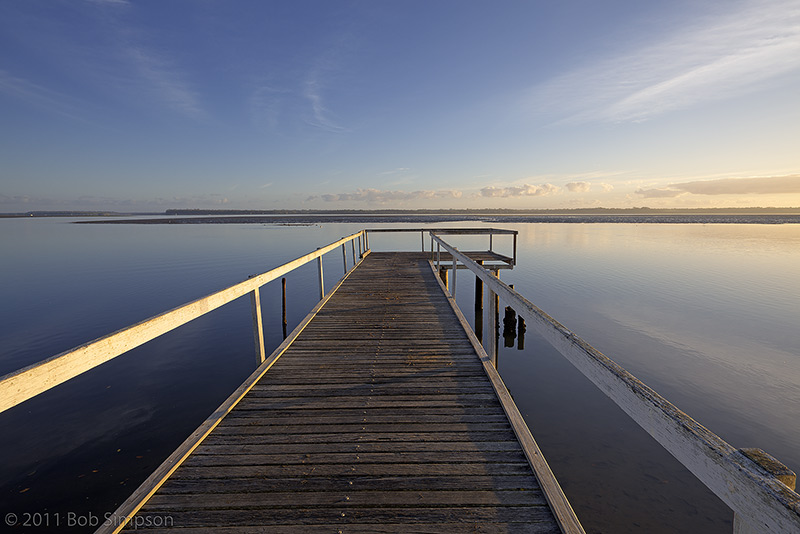 Dicky Beach is named and known for the wreck of the SS Dicky, a steel-hulled steamship that came aground here in 1893. It's a favourite target for photographers - a quick Google search will bring up dozens of images - but I hadn't visited before so thought it was time to have a look.

I arrived just before sunrise, and found that I wasn't the first one on the scene. Another photographer had already staked out a spot right in front of the wreck and was stooped behind his tripod as I approached. You never know in these sorts of cases what sort of reception you're going to get when another photographer feels you're intruding on his or her patch......yes, even landscape photographers can be prickly characters at times. But there was no problem.....after a friendly introduction, I spent the next hour chatting with and photographing alongside Owen Wilson who chases calendar images for a Sydney-based publisher. That's Owen in action in the third photograph.

Anyway, here are the best of my images from my first attempt at photographing the wreck of the SS Dicky. A slightly higher tide would have been nice to get some more wave action around the rusting remains, and if I'd been alone I might have tried some closer angles for dramatic effect.....but when you're sharing a landscape scene with other photographers (another guy turned up just after me), common courtesy dictates that you don't jump in and trample your footprints all over what they are trying to photograph!

There was quite a nice glow in the pre-dawn sky, and a shutter speed of 8 seconds in the first image, and 3.2 seconds in the second, smoothed out the water for that dreamy, sunrise effect. 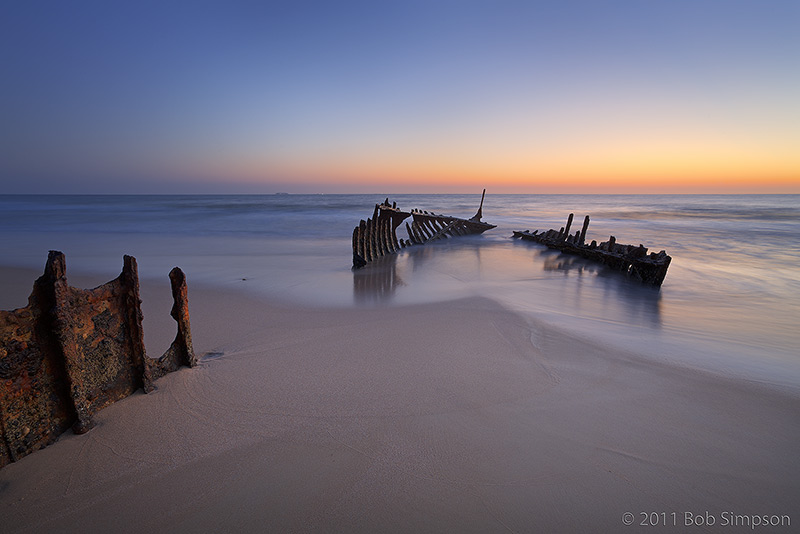 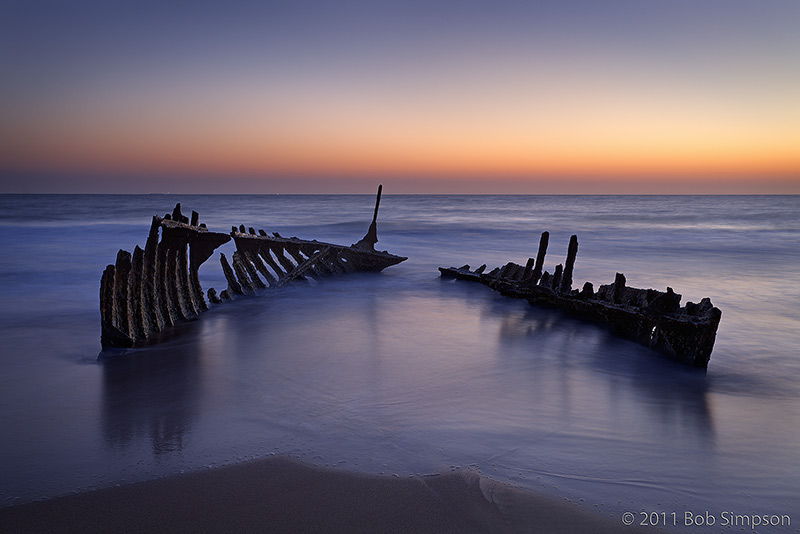 It's never easy getting the exposure right when the sun is in the frame - in fact I'd suggest it's impossible to get a good result in a single frame. A camera sensor just can't handle the range of brightness from full sun to deep shadows. The image below is the result of bracketing exposures and then blending them together using layers in Photoshop - and even then it takes some careful masking to get a reasonable result. There are some burnt-out highlights around the sun in this image, as you'd expect, but overall I think it's an acceptable rendition of what I saw. There are some tips on my approach to exposure blending here. 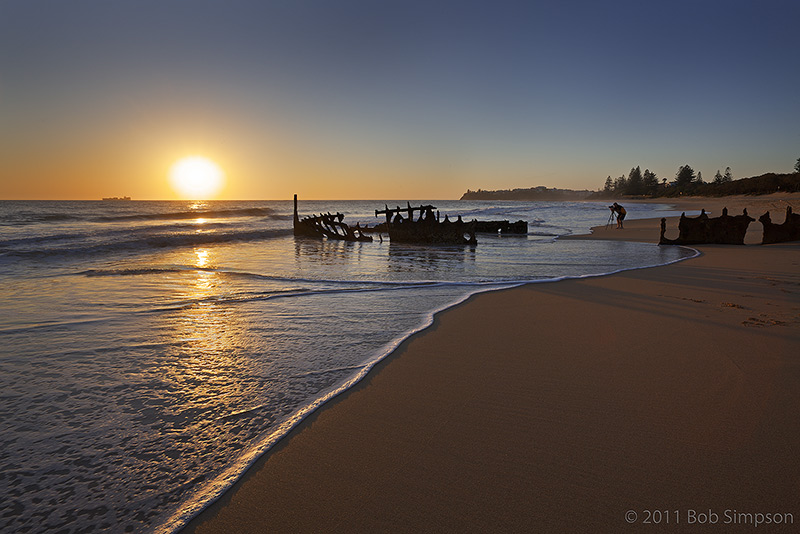 Two images from a cloudy morning on the tidal flats at Beachmere. Regular readers will know I'm a sucker for mangroves and mud - it's a challenge to create images that convey the wide open and silent feel of tidal flats.....apart from the challenge of just getting around when one wrong step can put you up to your knees in black, stinking goop. 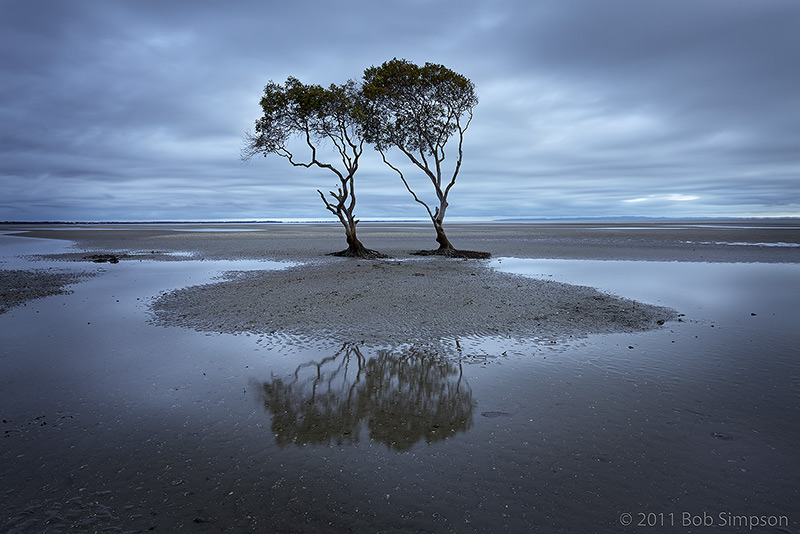 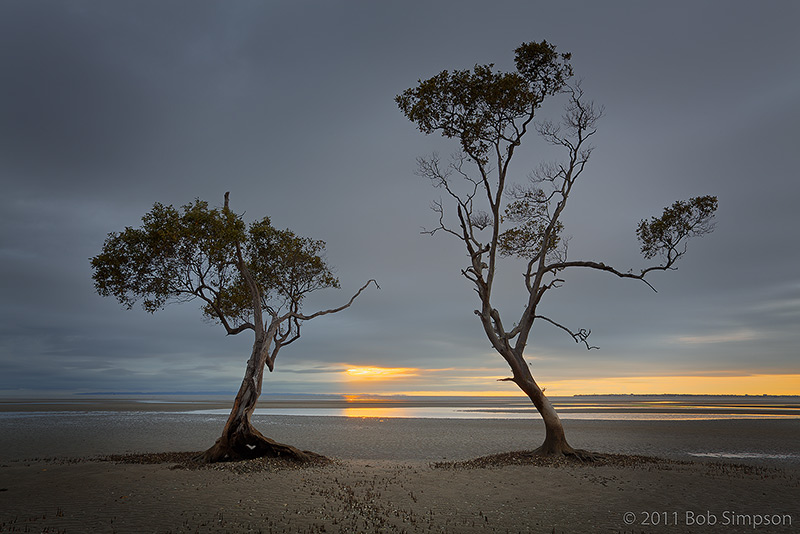