My new article about Girraween National Park appears in the May 2011 issue of Australian Photography magazine. The cover shot of the Sphinx is one of mine too. People who are familiar with the park might notice that the image has been reversed - this was an editorial decision to better accommodate the cover text. I wasn't completely happy with the decision, but in the end agreed to the reversal. Apologies to any purists who frown on this sort of thing! You can read the article here. 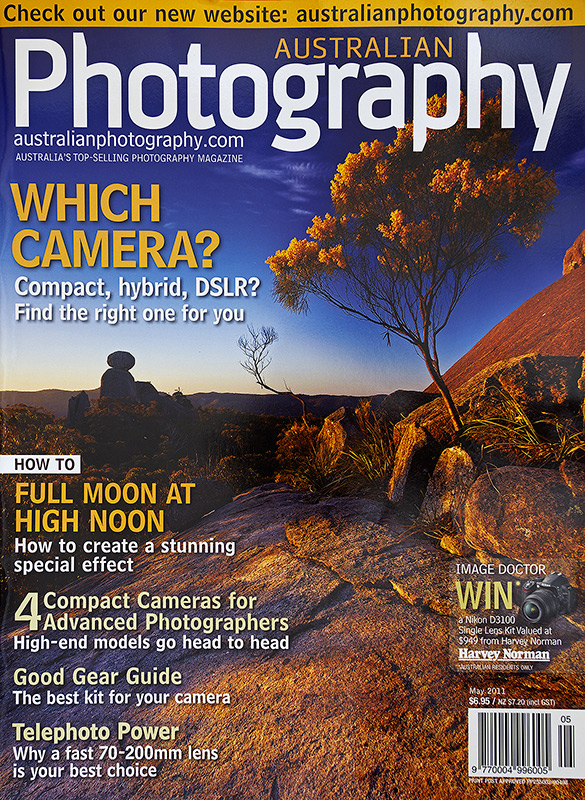 Here are a few shots from my quick trip down to the Glen Innes area last week. I spent a cold first night camped at the Mann River Nature Reserve up in the hills to the east of town. The main feature here is the Mann River which bubbles and rolls between rocky banks on its way to joining with the Clarence River many kilometres downstream. Riparian woodlands of cypress pine, river oak and eucalypts frame the narrow river channel, and are surrounded by steep timbered hills rising above the valley. 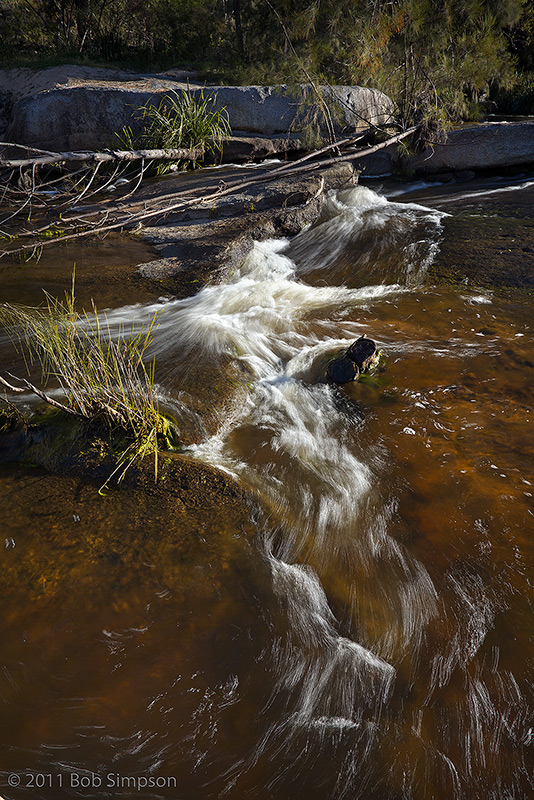 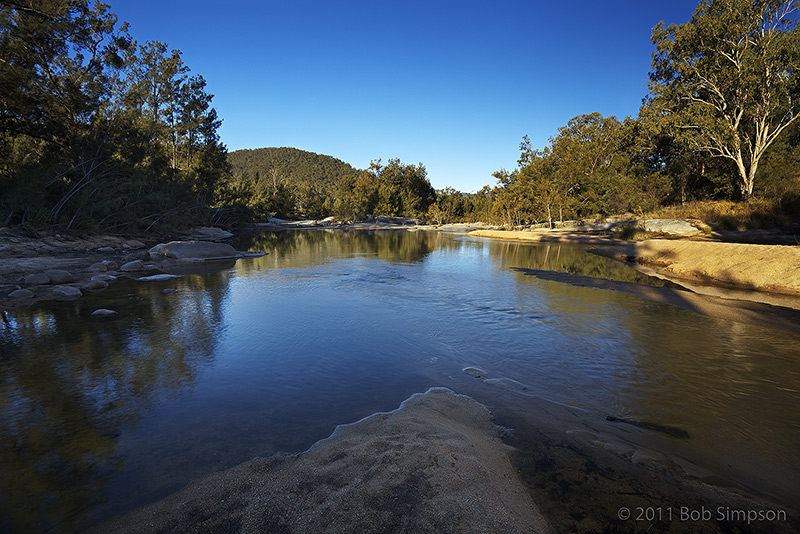 I found a spot about 20 minutes walk from the campground where an exposed rocky peak provided an interesting photographic backdrop for some shots of the creek. The north face of the peak caught the sun’s rays at sunset, and again the next morning at sunrise when the river valley was still in deep shade. This sort of situation can be difficult to photograph because of the very different light levels and quality between the foreground and background, so it’s worth taking several different exposures of each scene to give some leeway later when processing the shots. Here’s a typical shot of the Mann River with late afternoon sun lighting the background hills. 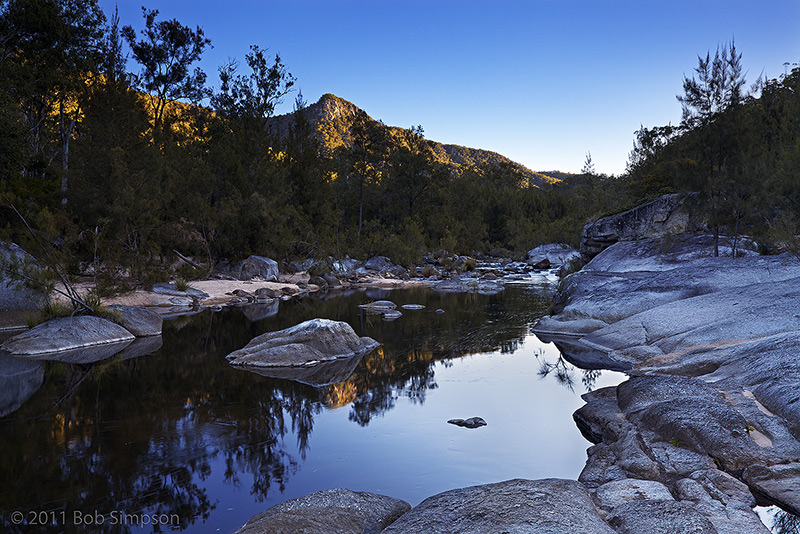 Next morning, clad in beanie, gloves, fleece and most of the other clothes I'd brought with me, I set out from my frosty campsite back up the river hoping for a colourful sunrise. That didn't happen, but the muted dawn tones and wafts of mist on the water produced some very pretty scenes. Here are two of my better shots, and there are more in the Latest Images gallery. 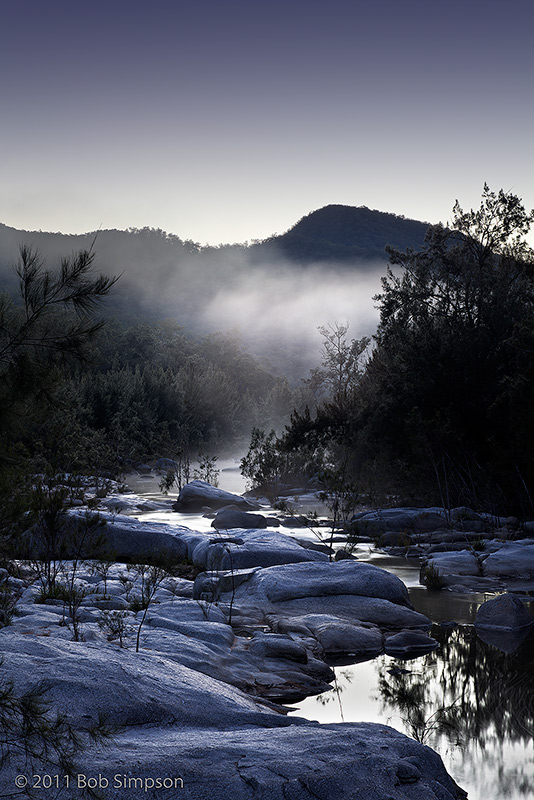 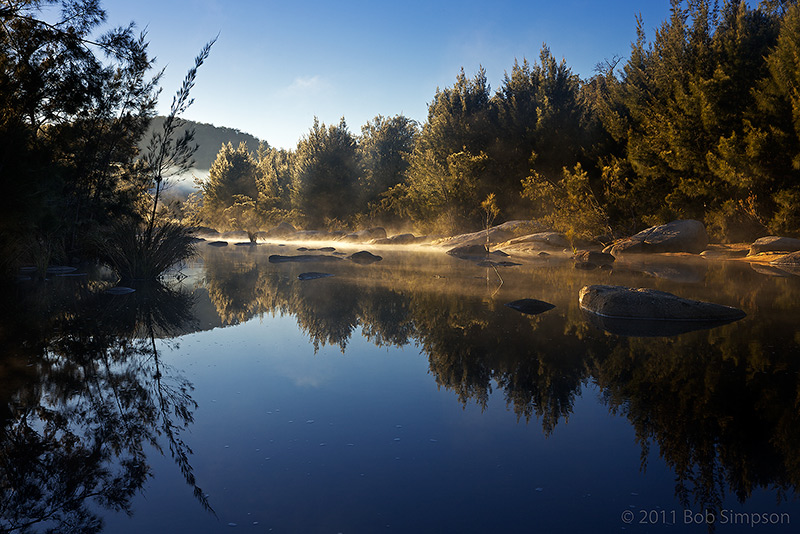 And after a tough day taking photos, there's time to kick back in camp. A fire and a small nip of port do a great job of keeping the cold at bay.....okay, maybe it wasn’t such a small nip. 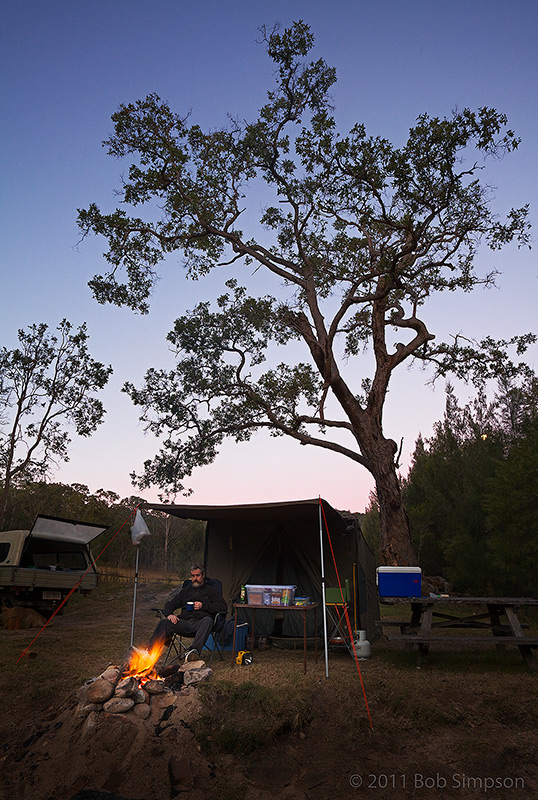 From Mann River, I headed to one of my favourite places, Gibraltar Range National Park. I’d visited and photographed this park quite a few times before, but had never managed to get any good shots of the Tree Fern Forest. This beautiful little grove of tree ferns and Sydney blue gums is around an hour’s walk from the camp ground, and is a difficult photographic prospect because it is such a dense jumble of green. It can be hard to find any meaningful compositions when you’re completely surrounded by fern fronds. I think the first shot captures the feel of the place best....and what a handsome young fellow I found to model for me! There's another shot in the Latest Images gallery. 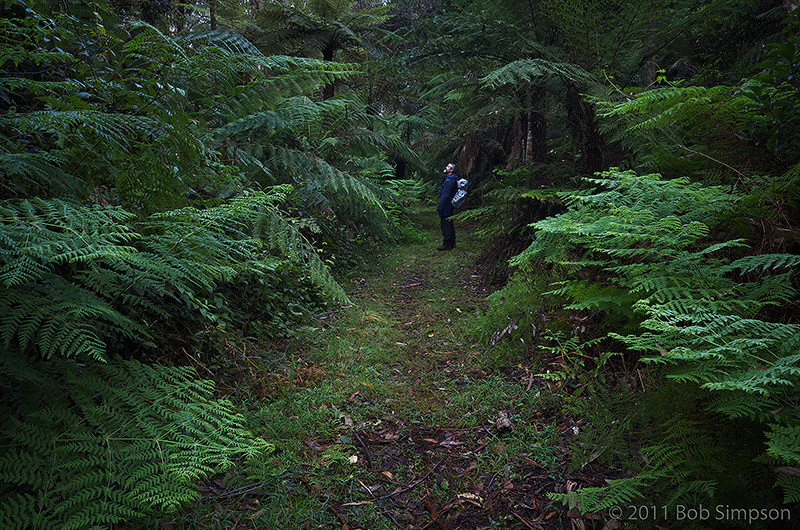 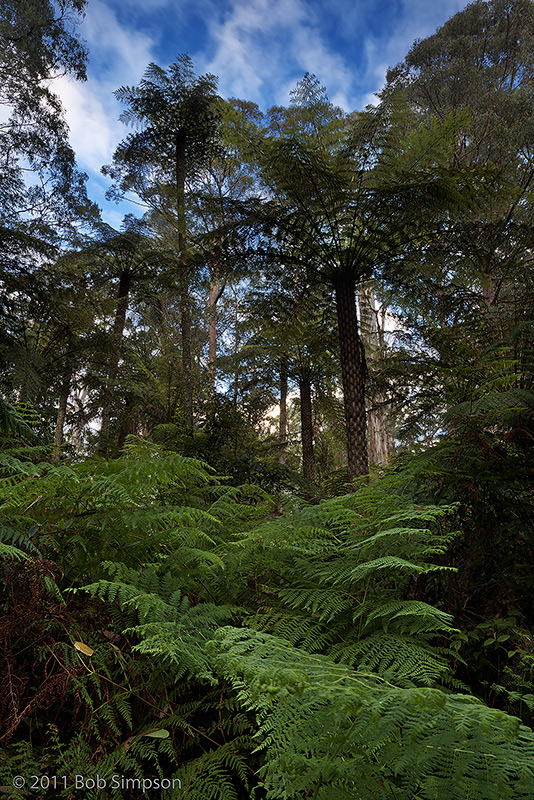 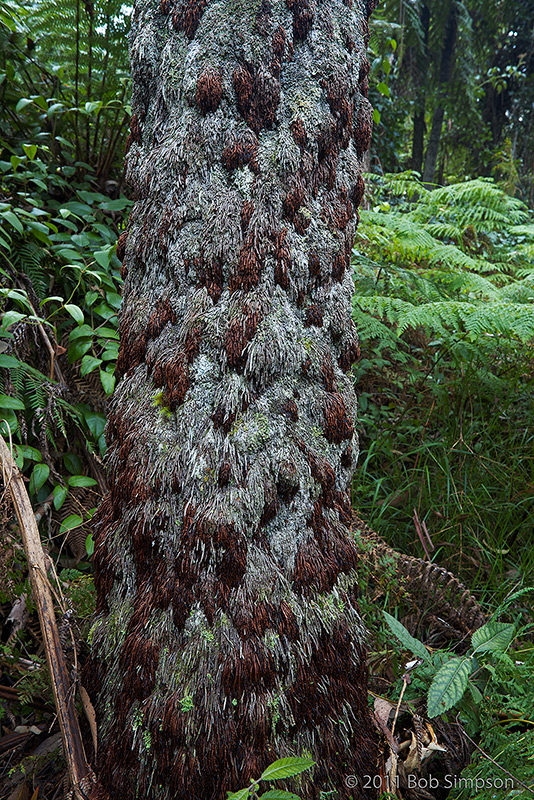 Just for a touch of contrast, this is the type of country you walk through on the way back from the Tree Fern Forest – it is sometimes hard to believe you’re still in the same National Park and such a short distance from the overwhelming greenery you’ve just left behind. 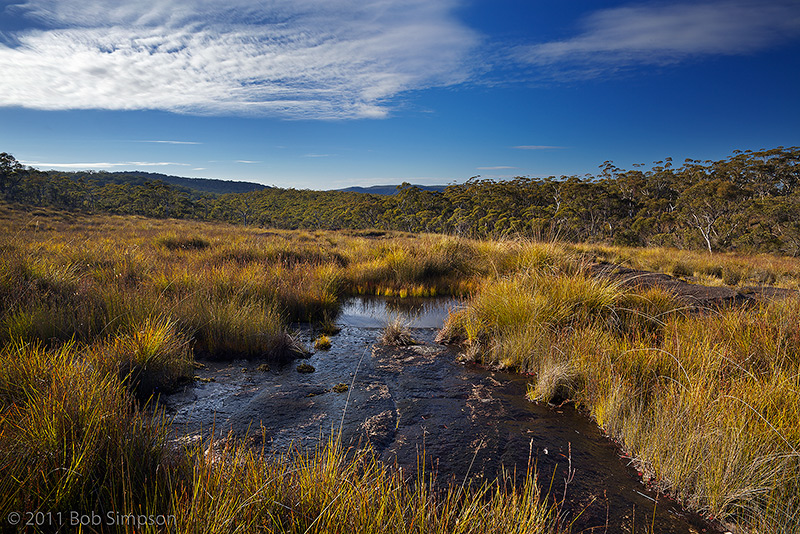 Other new photos this month

Venus, Mercury, Mars and Jupiter aligned on 13th May - they were visible in the pre-dawn sky as a a little cluster of bright dots. This is what I saw at 5.30am over the Narangba Valley - not a particularly captivating shot I must admit, but it won't happen again for quite a few years so it was worth the effort....and it looked much better in real life! If you look really hard all four planets are visible. 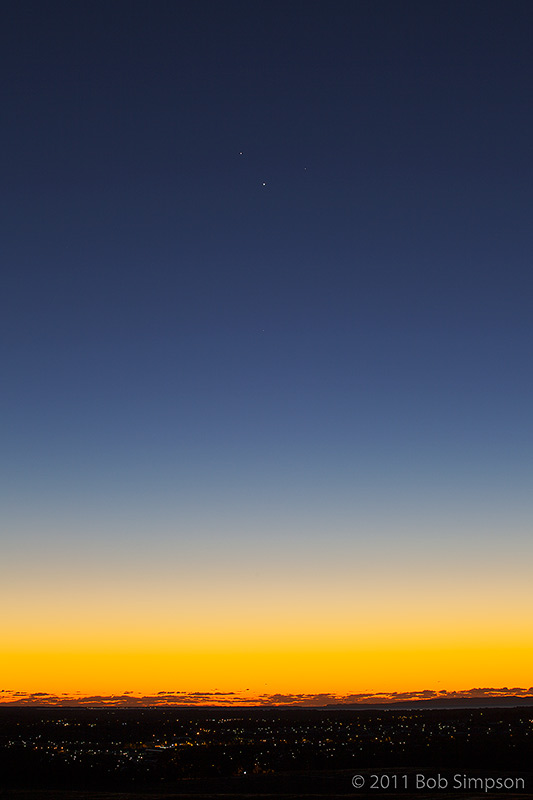 Afterwards, I hung around and caught a few shots of the sunrise over the valley with the Glass House Mountains in the background. 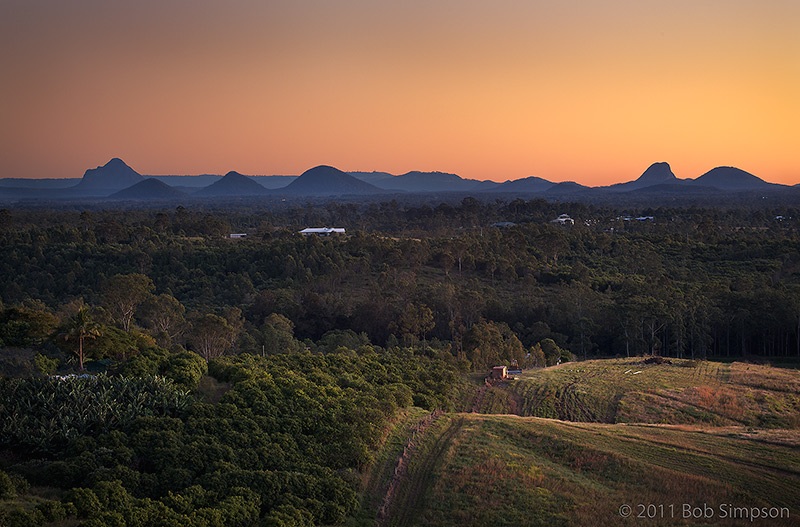 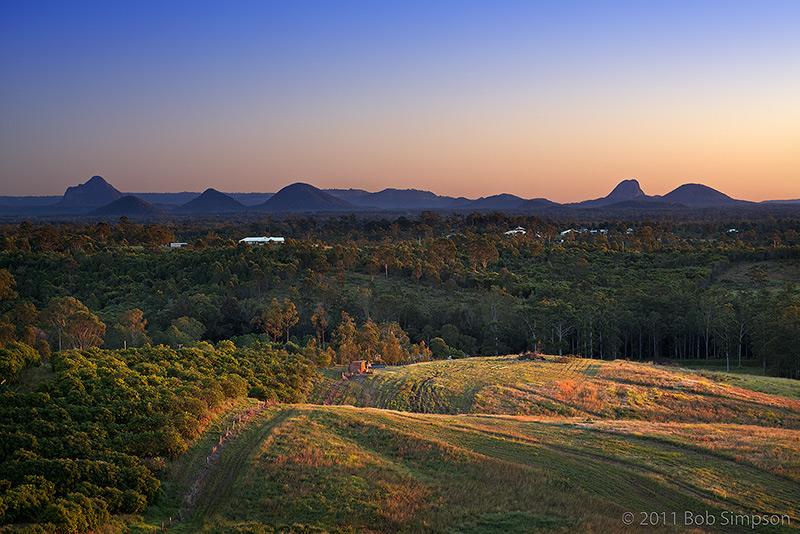 Carrying on my recent theme of local beaches and foreshores, here are a couple from White Patch and Toorbul taken earlier in the month. My current favourite from this batch is Symmetry in the Latest Images gallery - it's a simple shot but the arrangement of the clouds is pretty eye-catching....to my eyes anyway. 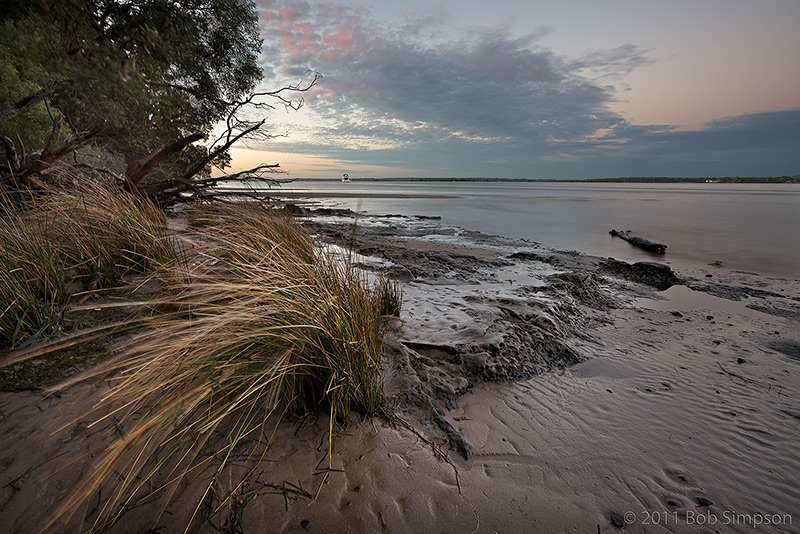 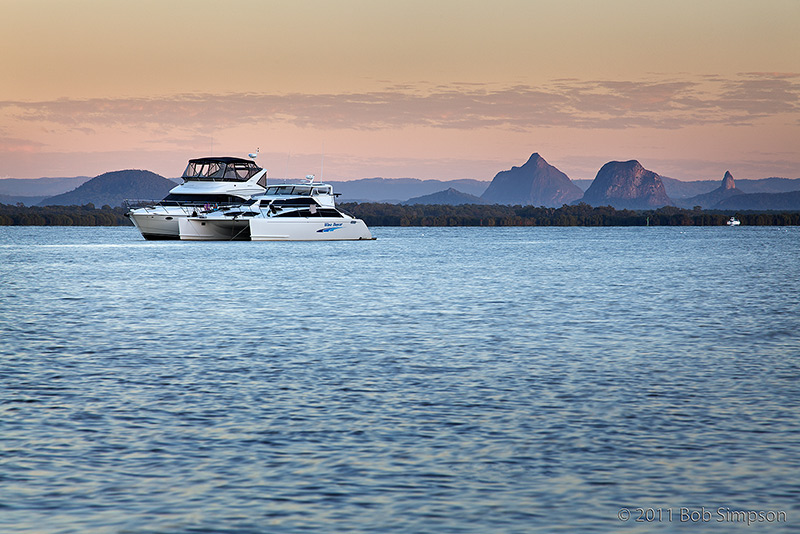 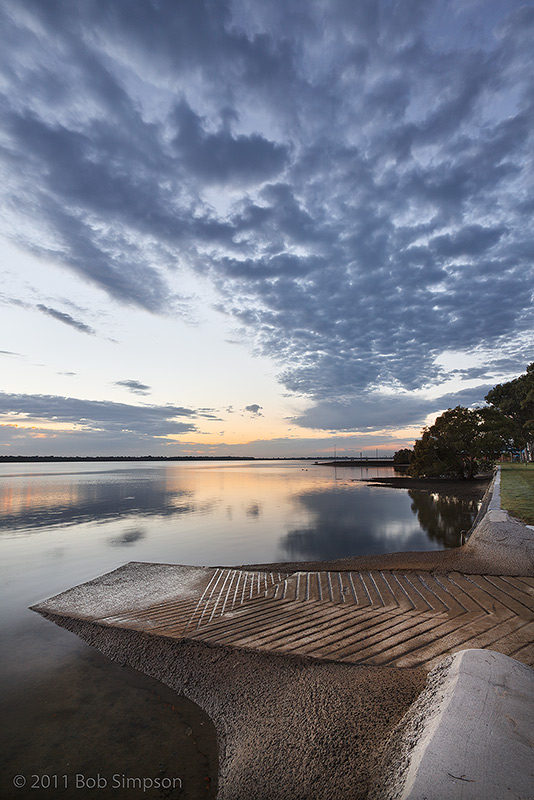 There are plenty of photogenic spots to explore around the Caloundra foreshores, and all of the Sunshine Coast for that matter. These shots are from a morning at Shelly Beach - the morning light was vibrant, and the lone fisherman on the rocks was a bonus from my point of view. 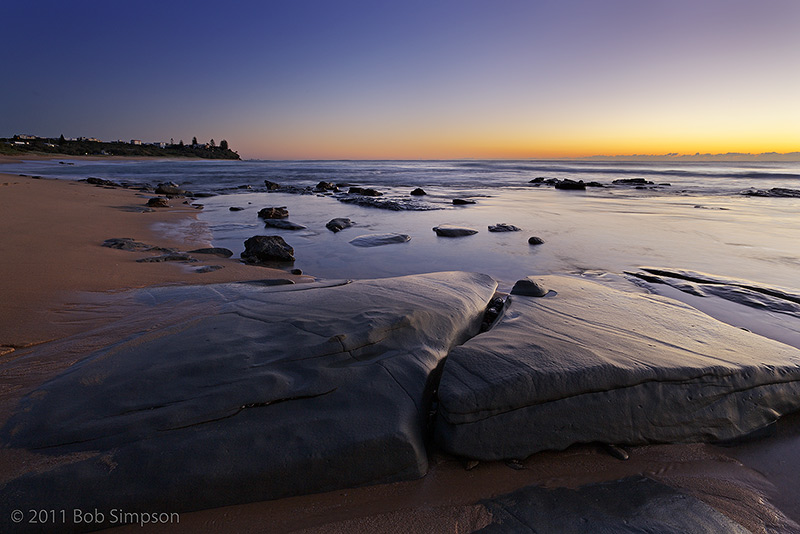 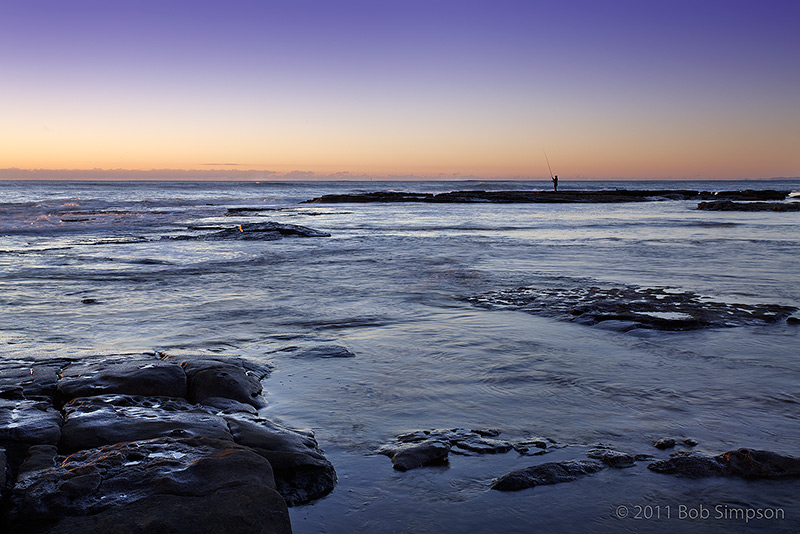 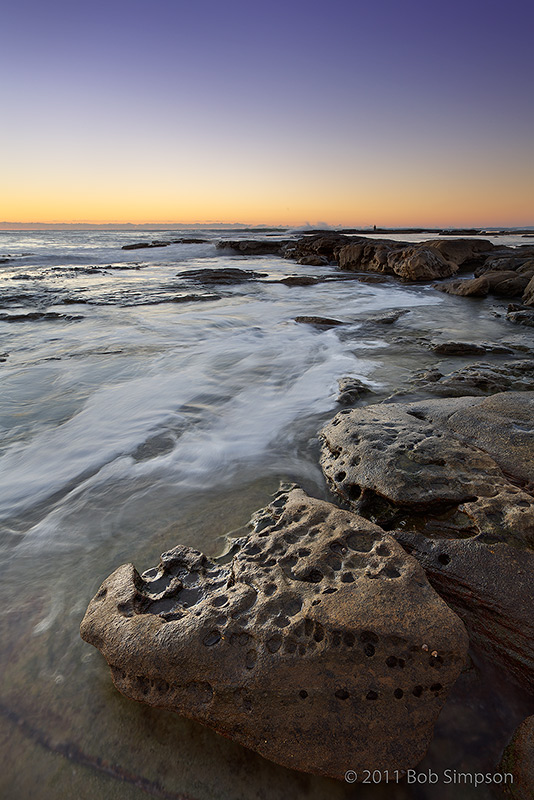 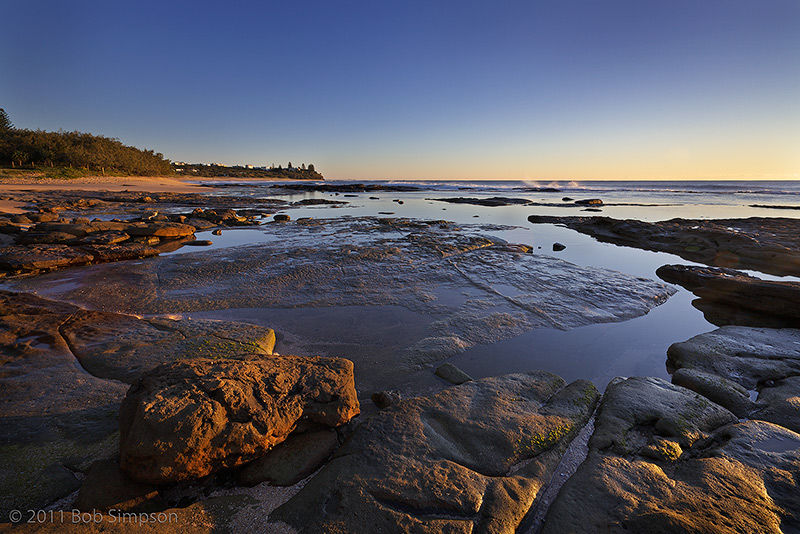